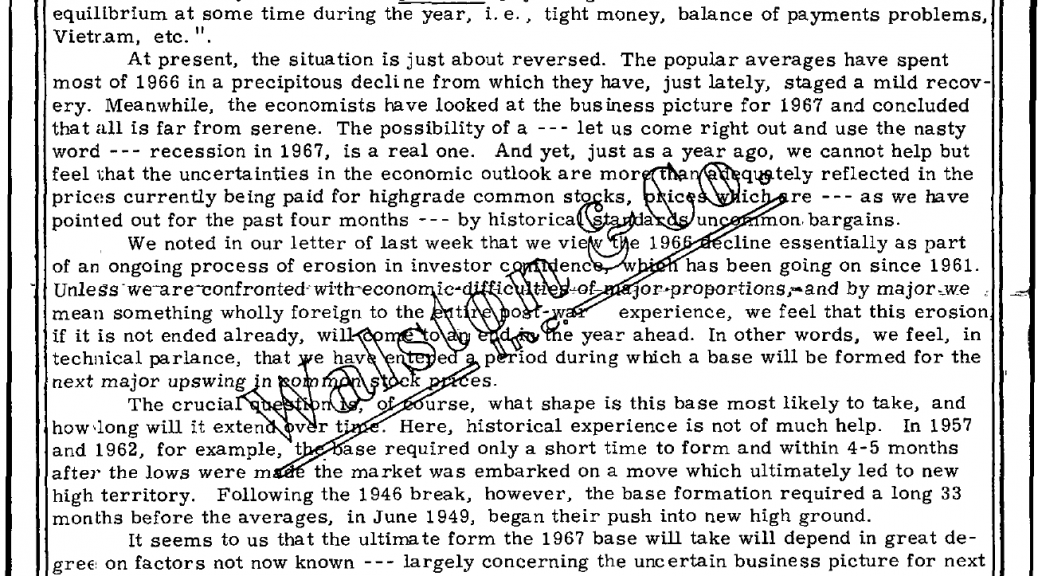 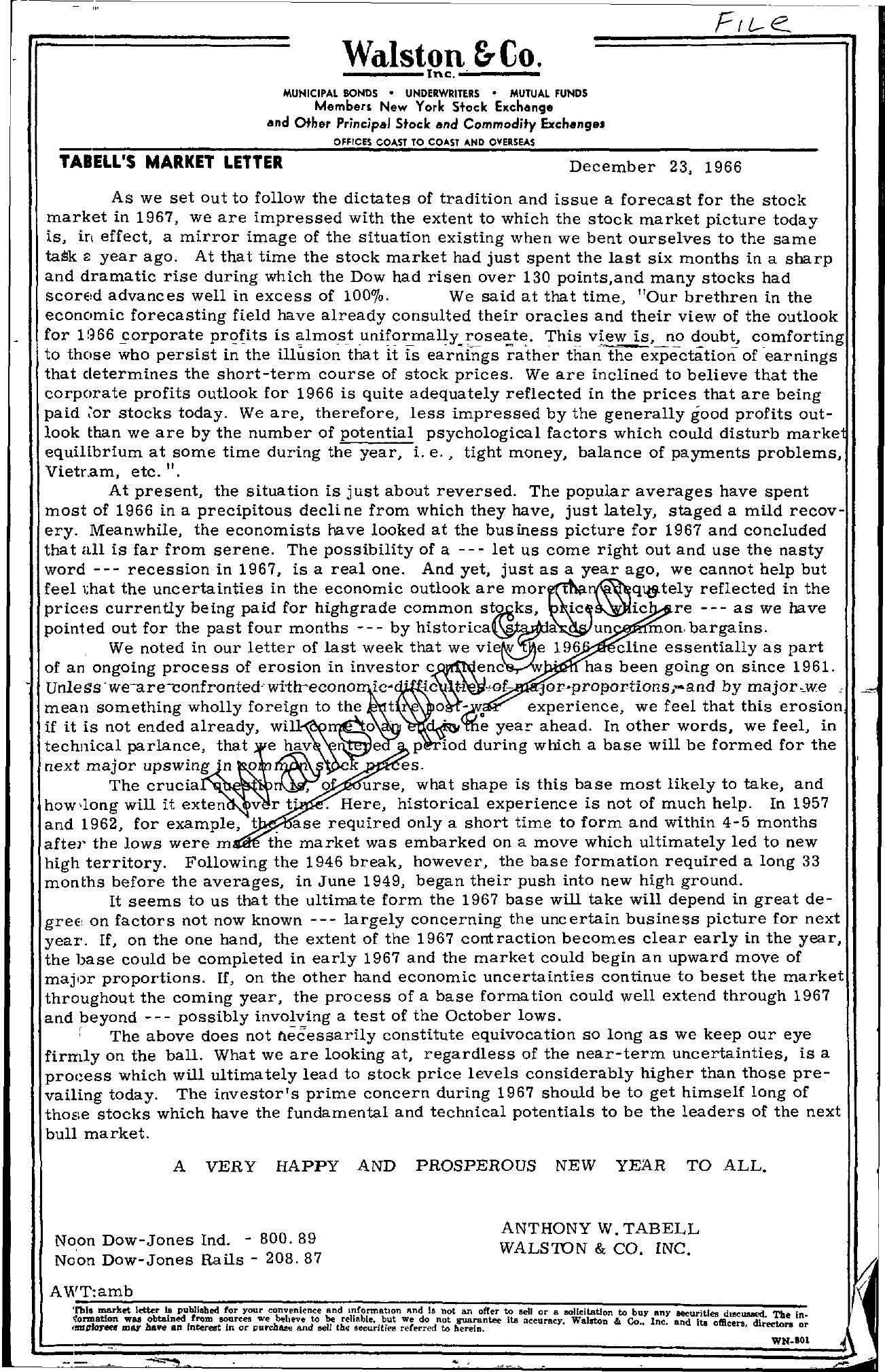 Walston &Co. – – – – I n c . …….- – – MUNICIPAL BONDS UNDERWRITERS MUTUAL FUNDS Members New York Stock Exchange and Other Principal Stock and Commodity Exchange. OFFICES COAST TO COAST AND OVERSEAS TABELL'S MARKET LETTER December 23, 1966 As we set out to follow the dictates of tradition and issue a forecast for the stock market in 1967, we are impressed with the extent to which the stock market picture today is, in effect, a mirror image of the situation existing when we bent ourselves to the same task 8 year ago. At that time the stock market had just spent the last six months in a sharp and dramatic rise during which the Dow had risen over 130 points,and many stocks had score,d advances well in excess of 1000/0. We said at that time, Our brethren in the economic forecasting field have already consulted their oracles and their view of the outlook for 1966 pr()fits is almost uniformally roseate. This view is, no doubt, comforting to those who persist in the illusion that it is ;ather tiian' the expe-ctatiori- of earnings that determines the short-term course of stock prices. We are inclined to believe that the corporate profits outlook for 1966 is quite adequately reflected in the prices that are being paid or stocks today. We are, therefore, less impressed by the generally good profits out- look than we are by the number of potential psychological factors which could disturb marke equilibrium at some time during the year, i. e., tight money, balance of payments problems, Vietr.am, etc.. At present, the situation is just about reversed. The popular averages have spent most of 1966 in a precipitous decli ne from which they have, just lately, staged a mild recov- ery. Meanwhile, the economists mve looked at the business picture for 1967 and concluded that all is far from serene. The possibility of a – – – let us come right out and use the nasty word — recession in 1967, is a real one. And yet, just as a year ago, we cannot help but feel1;hat the uncertainties in the economic outlook are reflected in the prices currently being paid for highgrade common ic re — as we have pointed out for the past four months – – – by historica a un mono bargains. , We noted in our letter of last week that we 196 cline essentially as part of an ongoing process of erosion in investor has been going on since 1961. – tr by , mean something wholly foreign to the t o . experience, we feel that this erosion if it is not ended already, technica.l parlane, e hav – yea!' ahead. In other words, we feel, in e p iod during which a base will be formed for the next major upswmg n 0 es. The crucia urse, what shape is this base most likely to take, and how,long will it exten r t' Here, historical experience is not of much help. In 1957 and 1962, for example, ase required only a short time to form and within 4-5 months after the lows were m the market was embarked on a move which ultimately led to new high territory. Following the 1946 break, however, the base formation required a long 33 months before the averages, in June 1949, began their push into new high ground. It seems to us that the ultima te form the 1967 base will take will depend in great de- gree, on factors not now known — largely concerning the uncertain business picture for next year. If, on the one hand, the extent of the 1967 contraction becomes clear early in the year, the base could be completed in early 1967 and the market could begin an upward move of major proportions. If, on the other hand economic uncertainties continue to beset the market throughout the coming year, the process of a base forma tion could well extend through 1967 and beyond — possibly involving a test of the October lows. r The above does not necessarily constitute equivocation so long as we keep our eye firmly on the ball. What we are looking at, regardless of the near-term uncertainties, is a proeess which will ultimately lead to stock price levels considerably higher than those pre- vailing tOday. The investor's prime concern during 1967 should be to get himself long of those stocks which have the fundamental and technical potentials to be the leaders of the next bull market. A VERY HAPPY AND PROSPEROUS NEW YEAR TO ALL. Noon Dow-Jones Ind. – 800.89 Noon Dow-Jones Rails – 208.87 ANTHONY W. TABELL WALSTON & CO. INC. AWTamb '(bIll market letter is published for your convenience and mformatlon And 15 tlot an offer to sell OT a IIOIleltaUon to buy any securities dll!cusaed Th I was obtained from sources we bl!heve to be reliable. (!DIDloYeee' DIS' have an Interest In or purchase and sell the we do not guarantee referred to herein. its aceurftcy. Walston &. Co.. Ine. and its officen ' di;-…….-..le'lI nor WN101