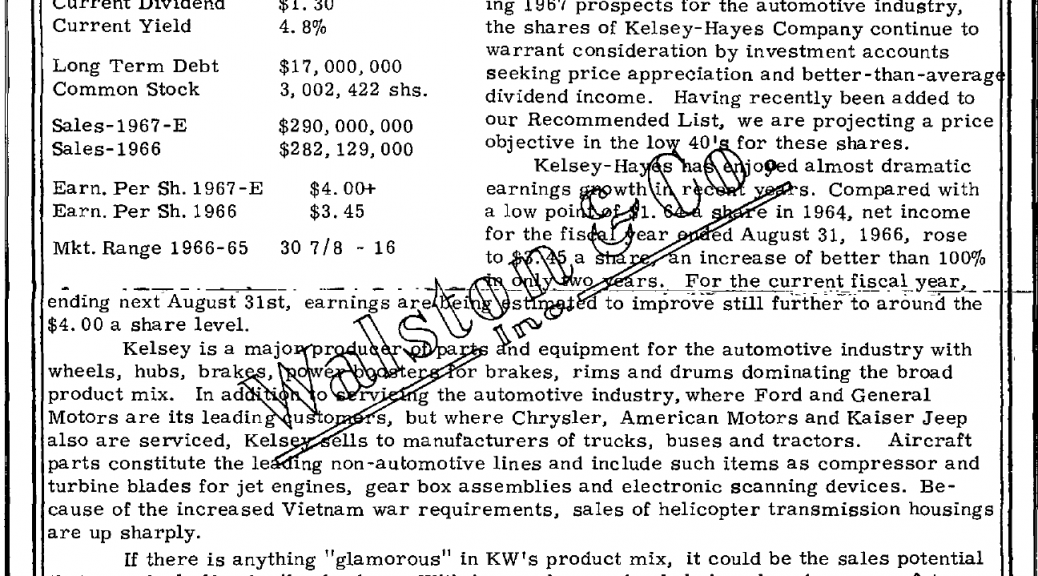 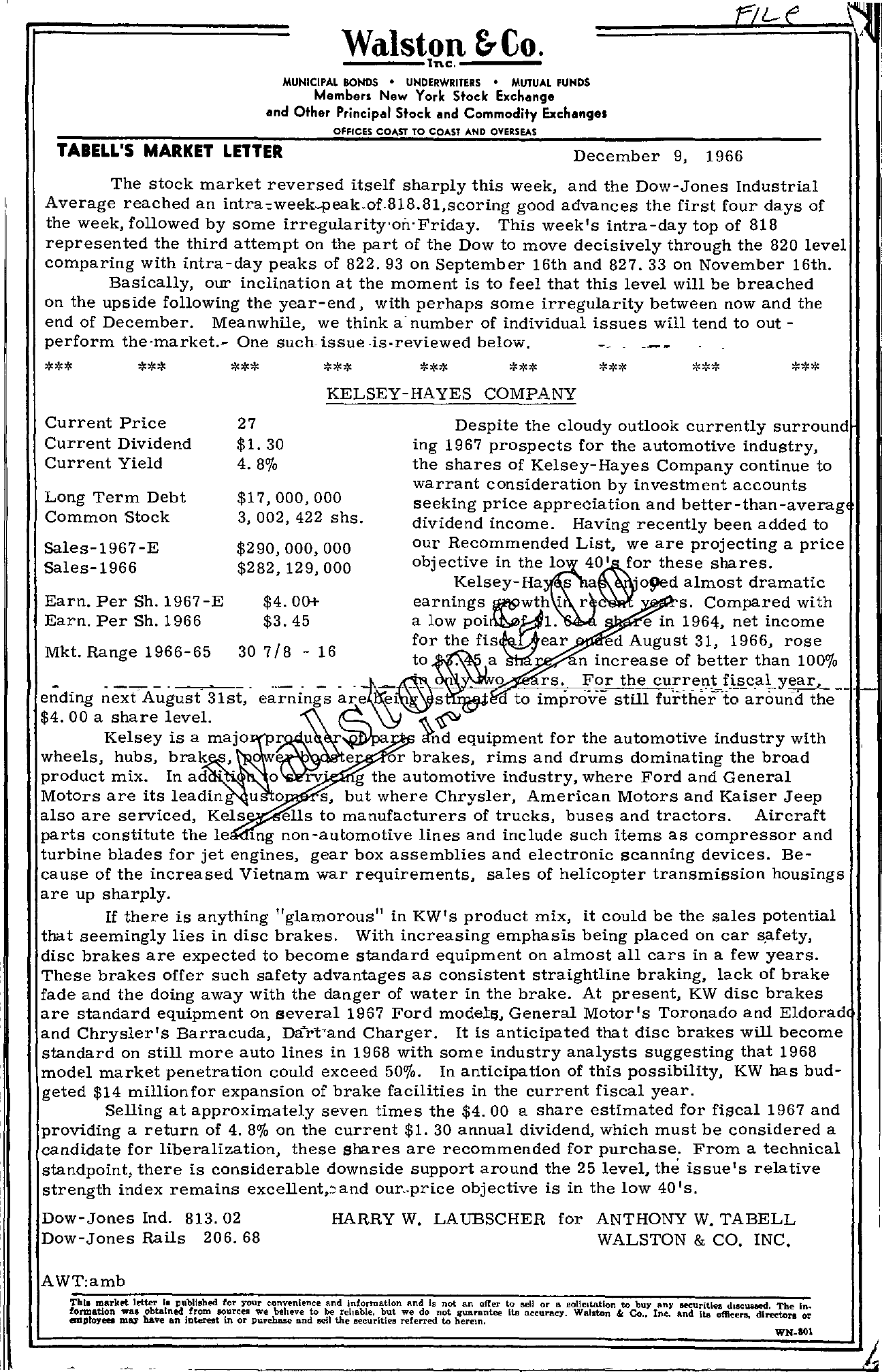 Walston &Co. —–Inc. —– MUNICIPAL BONOS UNDERWRITERS MUTUAL FUNDS Members New York Stock Exchange and Other Principal Stock and Commodity Exchanges OFFICES COAST TO COAST AND OVERSEAS TABELL'S MARKET LETTER December 9, 1966 The stock market reversed itself sharply this week, and the Dow-Jones Industrial Average reached an good advances the first four days of the week, followed by SOme irregularityon'Friday. This week's intra-day top of 818 represented the third attempt on the part of the Dow to move decisively through the 820 level comparing with intra-day peaks of 822.93 on September 16th and 827.33 on November 16th. Basically, our inclination at the moment is to feel that this level will be breached on the upside following the year-end, with perhaps some irregularity between now and the end of December. Meanwhile, we think a'number of individual issues will tend to out- perform the'market.- One such- issue ,isreviewed below. KELSEY-HAYES COMPANY Current Price Current Dividend Current Yield 27 1. 30 4.8 Long Term Debt Common Stock 17,000,000 3, 002, 422 shs. Sales-1967-E Sales-1966 290,000,000 282,129,000 Earn. Per Sh. 1967-E Earn. Per Sh. 1966 4.00 3.45 Mkt. Range 1966-65 307 I 8 – 16 Despite the cloudy outlook currently surround ing 1967 prospects for the automotive industry, the shares of Kelsey- Hayes Company continue to warrant consideration by investment accounts seeking price appreciation and better-than-averag dividend income. Having recently been added to our Recommended List, we are projecting a price objective in Kelsey-Ha s a these shares. 'oged almost dramatic earnings Wl9wth i r s . Compared with a low e in 1964, net income for the ed August 31, 1966, rose n increase of better than 1000/0 to –,- Kelsey is wheels, hubs, brak , product mix. In ad .. ru .rnd equipment for the automotive industry with e or brakes, rims and drums dominating the broad 0 rv' g the automotive industry, where Ford and General MotOrs are its leadin u 0 s, but where Chrysler, American Motors and Kaiser Jeep also are serviced, Kels ells to manufacturers of trucks, buses and tractors. Aircraft parts constitute the Ie lng non-automotive lines and include such items as compressor and turbine blades for jet engines, gear box assemblies and electronic scanning devices. Because of the increased Vietnam war requirements, sales of helicopter transmission housings are up sharply. If there is anything glamorous in KW's product mix, it could be the sales potential that seemingly lies in disc brakes. With increasing emphasis being placed on car S!J,fety, disc brakes are expected to become standard equipment on almost all cars in a few years. These brakes offer such safety advantages as consistent straightline braking, lack of brake fade and the doing away with the danger of water in the brake. At present, KW disc brakes are standard equipment on several 1967 Ford model!;!, General Motor's Toronado and Eldorad and Chrysler's Barracuda, Charger. It is anticipated that disc bra'kes will become standard on still more auto lines in 1968 with some industry analysts suggesting that 1968 model market penetration could exceed 500/0. In anticipation of this possibility, KW has bud- geted 14 million for expansion of brake facilities in the current fiscal year. Selling at approximately seven times the 4.00 a share estimated for fiscal 1967 and providing a return of 4. 8 on the current 1. 30 annual dividend, which must be considered a candidate for liberalization, these shares are recommended for purchase. From a technical standpoint, there is considerable downside support around the 25 level, the issue's relative strength index remains and our..price objective is in the low 40 'so Dow-Jones Ind. 813.02 Dow-Jones Rails 206. 68 HARRY W. LAUBSCHER for ANTHONY W. TABELL WALSTON & CO. INC. AWTamb Thll market letter I. publlebed for YOUr convenience and information Rnd Is not an offer to sell or a soliCitation to buy any IleCUritiea dl8Cuaaed. The In. formation was obtained from sources we beheve to be rehllble. but we do not guarantee its accuracy. Walston & Co., Inc. and Ita officers, direclon or employees may have an Intereflt In or pupcbase and sen the securities referred to herem. 6