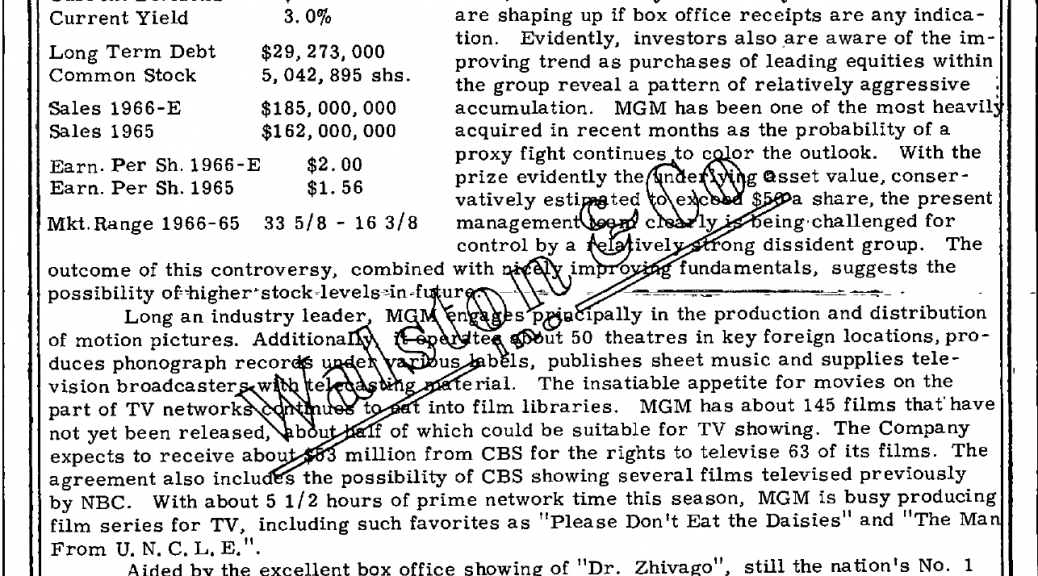 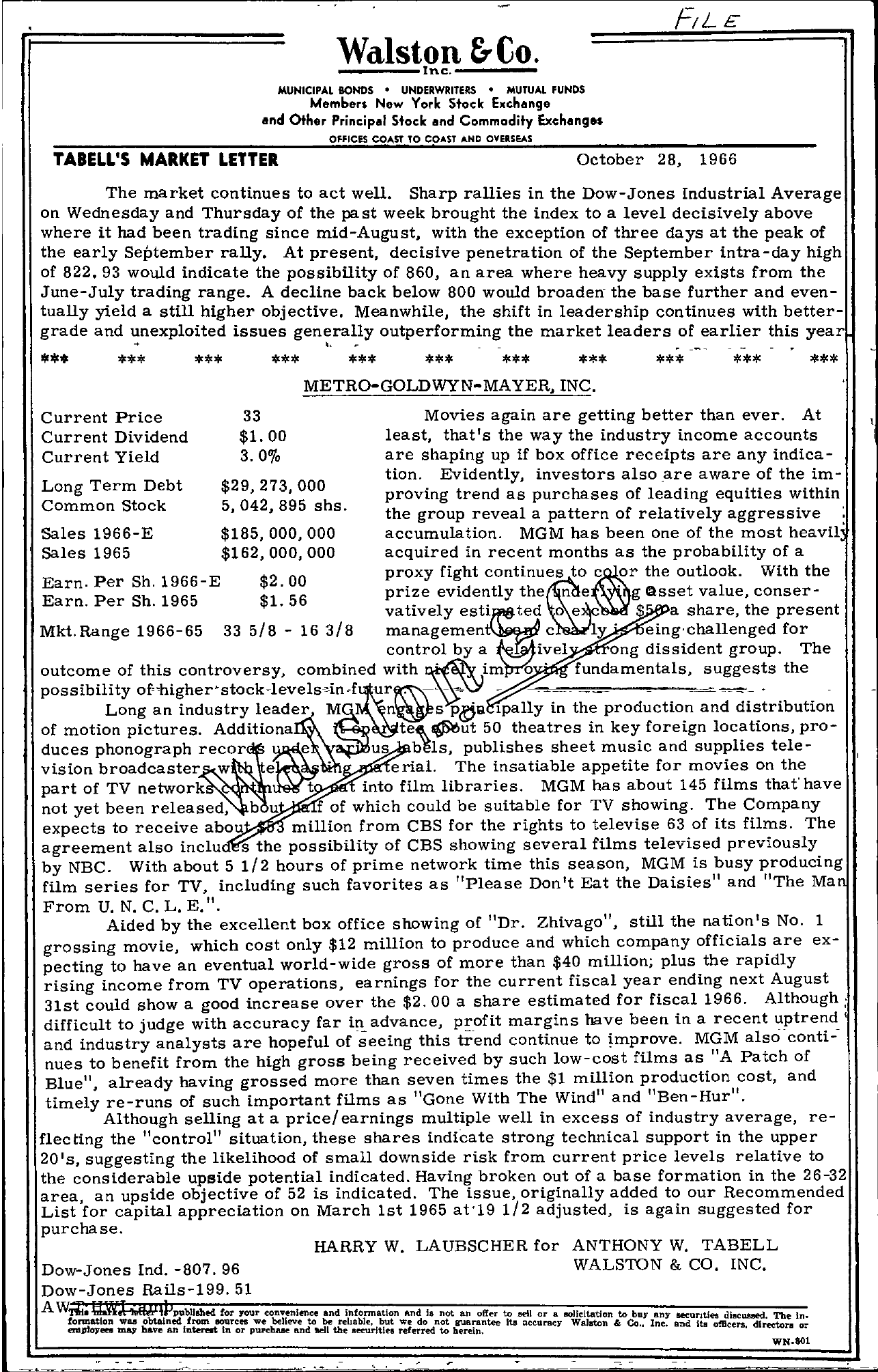 Walston &eo…;… Inc. ;…—..;… MUNICIPAL BONDS UNDERWRITERS MUTUAL FUNDS Members New York Stock Exchange and Other Principal Stock and Commodity Exchang OfFICES COA.ST TO COAST AND OVERSEAS TABELL'S MARKET LETTER October 28, 1966 The market continues to act well. Sharp rallies in the Dow-Jones Industrial Average on Wednesday and Thursday of the past week brought the index to a level decisively above where it had been trading since mid-August, with the exception of three days at the peak of the early September rally. At present, decisive penetration of the September intra-day high of 822.93 would indicate the possibility of 860, an area where heavy supply exists from the June-July trading range. A decline back below 800 would broaden the base further and eventually yield a still higher objective. Meanwhile, the shift in leadership continues with bettergrade and unexploited issues generally outperforming the market leaders of earlier this year …. . – METRO-GOLDWYN-MAYER, INC. Current Price Current Dividend Current Yield Long Term Debt Common Stock 33 1. 00 3. 0/. 29,273,000 5,042,895 shs. Movies again are getting better than ever. At least, that's the way the industry income accounts are shaping up if box office receipts are any indication. Evidently, investors also are aware of the improving trend as purchases of leading equities within the group reveal a pattern of relatively aggressive Sales 1966-E Sales 1965 185,000,000 162,000,000 accumulation. MGM has been one of the most heavil acquired in recent months as the probability of a Earn. Per Sh. 1966-E Earn. Per Sh. 1965 2.00 1. 56 Mkt.Range 1966-65 33 5/8 – 163/8 proxy fight continues to the outlook. With the prize evidently . g asset value, conser- vatively ted 0 e a share, the present managemen c ly' . eingchallenged for control by a ong dissident group. The of thiS. controversy, com.t'ined with fundamentals, suggests the ;p.lly nd .',;,lbutio; of motion pictures. Additiona 50 theatres in key foreign locations, pro- duces phonograph recor us publishes sheet music and supplies tele- vision broadcaster w e ' erial. The insatiable appetite for movies on the part of TV network t into film libraries. MGM has about 145 films that' have not yet been released, b u f of which could be suitable for TV showing. The Company expects to receive abou million from CBS for the rights to televise 63 of its films. The agreement also inclu s the possibility of CBS showing several films televised previously by NBC. With about 5 1/2 hours of prime network time this season, MGM is busy producing film series for TV, including such favorites as Please Don't Eat the Daisies and The Ma From U. N. C. L. E. . Aided by the excellent box office showing of Dr. Zhivago, still the nation's No. 1 grossing movie, which cost only 12 million to produce and which company officials are ex- pecting to have an eventual world-wide gross of more than 40 million; plus the rapidly rising income from TV operations, earnings for the current fiscal year ending next August 31st could show a good increase over the 2.00 a share estimated for fiscal 1966. Although; difficult to judge with accuracy far in advance, p!,ofit margins have been in a recent uptrend. \ and industry analysts are hopeful of seeing this trend continue to improve. MGM also conti- nues to benefit from the high gross being received by such low-cost films as A Patch of Blue, already having grossed more than seven times the 1 million production cost, and timely re-runs of such important films as Gone With The Wind and Ben-Hur. Although selling at a price/earnings multiple well in excess of industry average, re- flecting the control situation, these shares indicate strong technical support in the upper 20's, suggesting the likelihood of small downside risk from current price levels relative to the considerable upside potential indicated. Having broken out of a base formation in the 26-32 area, an upside objective of 52 is indicated. The issue, originally added to our Recommended List for capital appreciation on March 1st 1965 at'19 1/2 adjusted, is again suggested for purchase. HARRY W. LAUBSCHER for ANTHONY W. TABELL Dow-Jones Ind. -807. 96 WALSTON & CO. INC. Dow-Jones Rails-199. 51 AW'jif 4PttWlimlI PUbUllhed for your and infonnatlon and Is not an offer to !leU or a solicitation to buy any securIties di&e118lled Tb. i waa 0 btained from. II01lrees we believe to be reliable, but we do not guarantee Its accuracy Walston Co Ine and ita dl'-'- e em01et11 111&1 have an Intere.t in or pUPehaae and se11 the securities referred to herein. … …cera. .ox …..rll or