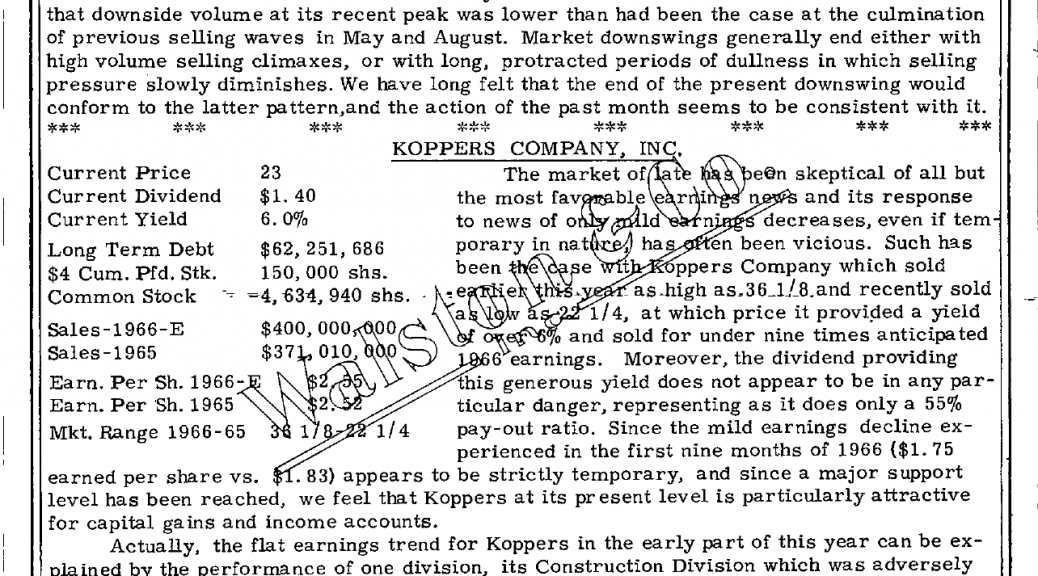 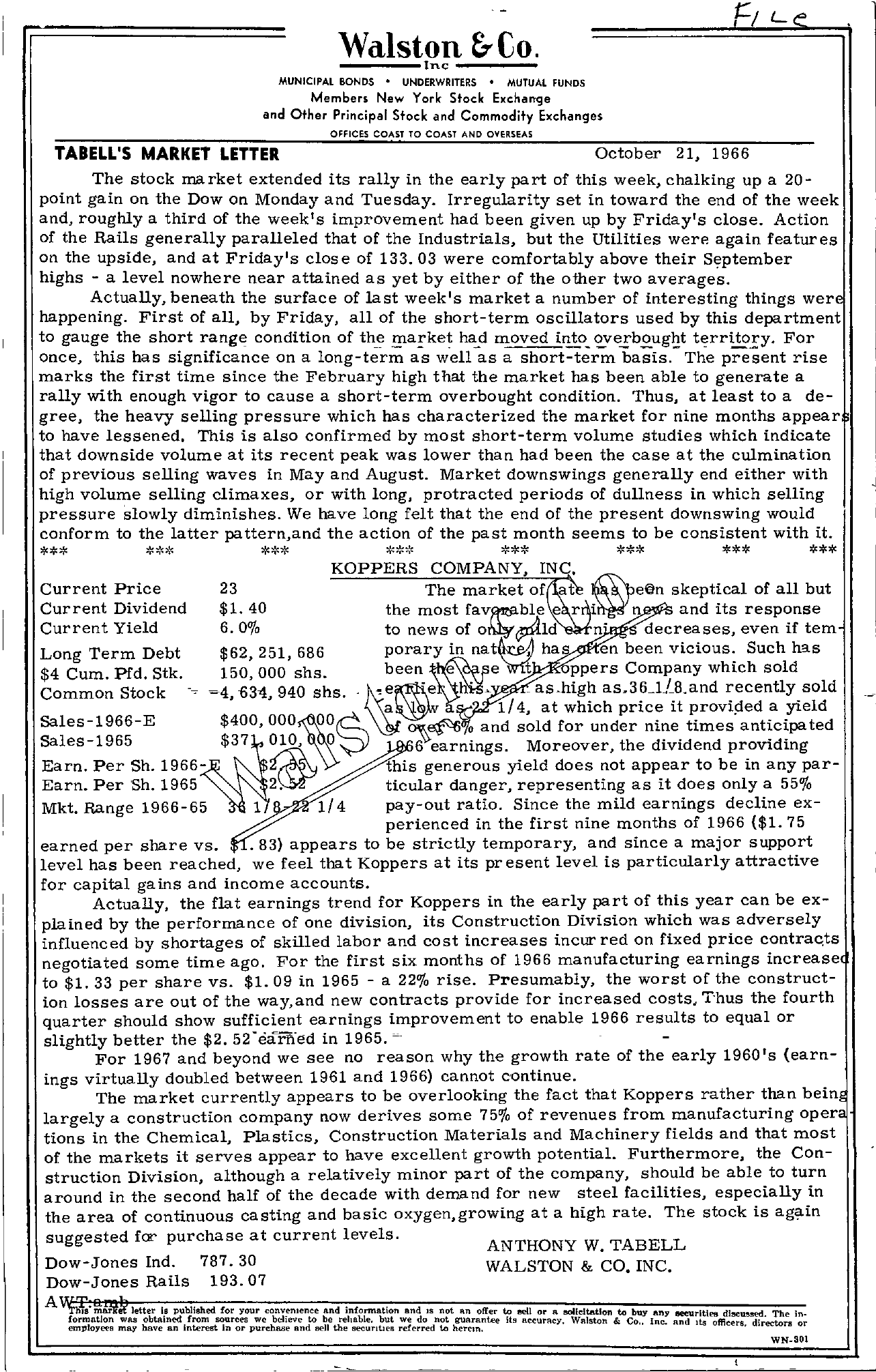 t/ L W—-a–l-s–tlonnc–&—C–o–. MUNICIPAL SONDS UNDERWRITERS MUTUAL FUNDS Members New York Stock Exchange and Other Principal Stock and Commodity Exchanges OFFICES COAST TO COAST AND OVERSEAS lABELL'S MARKET LETTER October 21, 1966 The stock market extended its rally in the early part of this week, chalking up a 20- point gain on the Dow on Monday and Tuesday. Irregularity set in toward the end of the week and, roughly a third of the week's improvement had been given up by Friday's close. Action of the Rails generally paralleled that of the Industrials, but the Utilities were again features on the upside, and at Friday's clos e of 133.03 were comfortably above their September highs – a level nowhere near attained as yet by either of the other two averages. Actually, beneath the surface of last week's market a number of interesting things wer happening. First of all, by Friday, all of the short-term oscillators used by this department to gauge the short range condition of the market had moved into overbought territory. For once, this has significance on a a's w-ell-as a short-term baSis.- The present rise marks the first time since the February high that the market has been able to generate a rally with enough vigor to cause a short-term overbought condition. Thus, at least to a de- gree, the heavy selling pressure which has characterized the market for nine months appear to have lessened. This is also confirmed by most short-term volume studies which indicate that downside volume at its recent peak was lower than had been the case at the culmination of previous selling waves in May and August. Market downswings generally end either with high volume selling climaxes, or with long, protracted periods of dullness in which selling pressure slowly diminishes. We have long felt that the end of the present downswing would conform to the latter pattern,and the action of the past month seems to be consistent with it. KOPPERS COMPANY, INC. Current Price 23 skeptical of all but Current Dividend 1. 40 the most e r n and its response Current Yield 6. 00/0 to news of n decreases, even if tem Long Term Debt 4 Cum. Pfd. Stk. Common Stock Sales-1966-E Sales-1965 Earn. Per Sh. 1966- 62,251, 686 150,000 shs. -634, 940 shs. 400, 010, oy; 1M. porary in been ha en been vicious. Such h8.s \ViiI ppers Company which sold em\e' Ii . as.high as.361L8.and recently sold 1/4, at which price it a yield and sold for under nine times anticipated 6 earnings. Moreover, the dividend providing this generous yield does not appear to be in any par- Earn. Per Sh. 1965 ticular danger, representing as it does only a 550/0 Mkt. Range 1966-65 1 1/4 pay-out ratio. Since the mild earnings decline ex- perienced in the first nine months of 1966 (1. 75 earned per share vs. .83) appears to be strictly temporary, and since a major support level has been reached, we feel that Koppers at its pr esent level is particularly attractive for capital gains and income accounts. Actually, the flat earnings trend for Koppers in the early part of this year can be ex- plained by the performance of one division, its Construction Division which was adversely influenced by shortages of skilled labor and cost increases incur red on fixed price contraqts negotiated some time ago. For the first six months of 1966 manufacturing earnings increase to 1. 33 per share vs. 1. 09 in 1965 – a 220/0 rise. Presumably, the worst of the construct- ion losses are out of the way,and new contracts provide for increased costs, Thus the fourth quarter should show sufficient earnings improvement to enable 1966 results to equal or slightly better the 2. 52ear'fied in 1965. — For 1967 and beyond we see no reason why the growth rate of the early 1960's (earn- ings virtually doubled between 1961 and 1966) cannot continue. The market currently appears to be overlooking the fact that Koppers rather than bein largely a construction company now derives some 750/0 of revenues from manufacturing oper tions in the Chemical, Plastics, Construction Materials and Machinery fields and that most of the markets it serves appear to have excellent growth potential. Furthermore, the Con- struction Division, although a relatively minor part of the company, should be able to turn around in the second half of the decade with demand for new steel facilities, especially in the area of continuous casting and basic oxygen,growing at a high rate. The stock is again suggested far purchase at current levels. Dow-Jones Ind. 787. 30 Dow-Jones Rails 193.07 ANTHONY W. TABELL WALSTON & CO. INC. formation was obtained from sources we believe to be rehable. but we do not guarantee its accuracy, Walswn & Co.. Inc and Its officers direct.o e m- eml'loyees may have an interest in or purchase and sell the secUTltws referred to herem. . rs or WNBOl