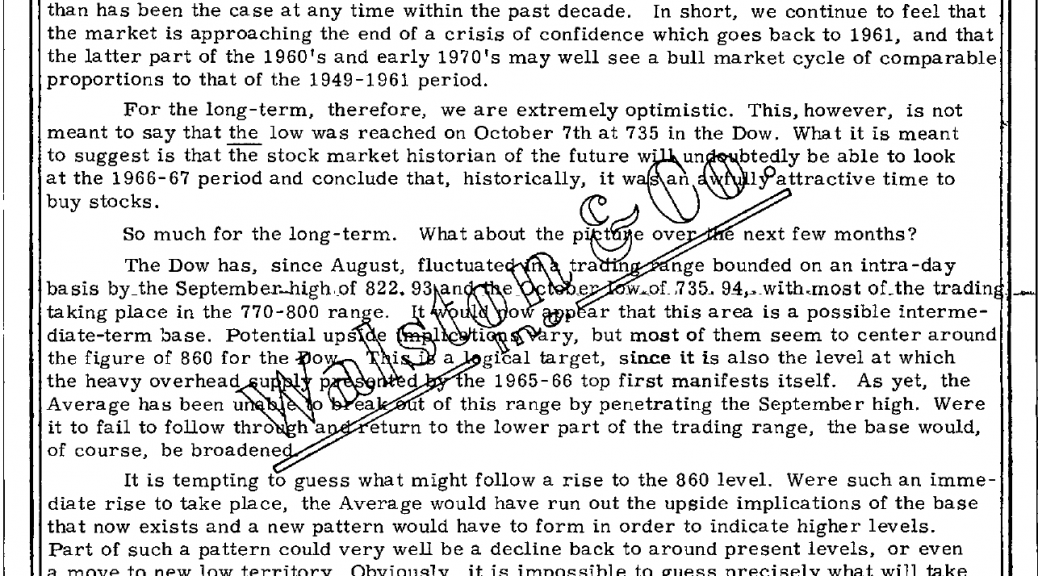 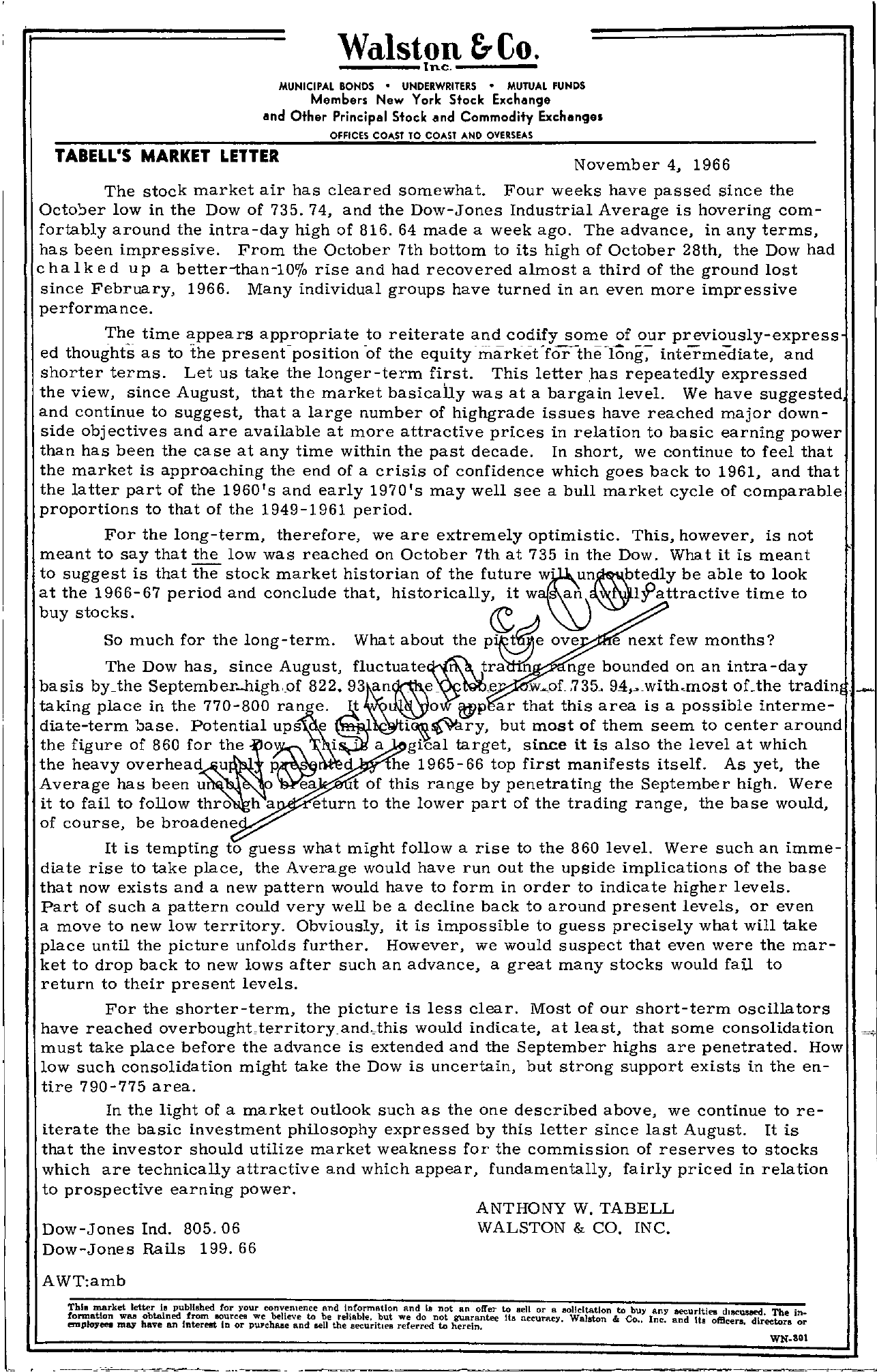 Walston &Co. ———lnc.——— MUNICIPAL BONDS UNDERWRITERS MUTUAL FUNDS Members New York Stock Exchange and Other Principal Stock and Commodity Exchanges OFFICES COAST TO COAST AND OVERSEAS TABELL'S MARKET LETTER November 4, 1966 The stock market air has cleared somewhat. Four weeks have passed since the Octo'ler low in the Dow of 735.74, and the Dow-Jones Industrial Average is hovering comfortably around the intra-day high of 816. 64 made a week ago. The advance, in any terms, has been impressive. From the October 7th bottom to its high of October 28th, the Dow had chalked up a better-than-100/0 rise and had recovered almost a third of the ground lost since February, 1966. Many individual groups have turned in an even more impressive performance. The time appears appropriate to reiterate and codify some of our previously-express ed thoughts as to the present-position 'of the equitymarket'for the-long-;- intermediate, and shorter terms. Let us take the longer-term first. This letter has repeatedly expressed the view, since August, that the market basically was at a bargain level. We have suggested and continue to suggest, that a large number of highgrade issues have reached major downside objectives and are available at more attractive prices in relation to basic earning power than has been the case at any time within the past decade. In short, we continue to feel that the market is approaching the end of a crisis of confidence which goes back to 1961, and that the latter part of the 1960's and early 1970's may well see a bull market cycle of comparable proportions to that of the 1949-1961 period. For the long-term, therefore, we are extremely optimistic. This, however, is not meant to say that the low was reached on October 7th at 735 in the Dow. What it is meant to suggest is that the stock market historian of the be able to look at the 1966-67 period and conclude that, historically, it w an time to buy stocks. So much for the long-term. What about the ove e next few months The Dow has, since August, nge bounded on an intra-day basis bythe September-high ..of 822. taking place in the 770-800 oe 9.4with.most oUhe tradin Wp ar that this area is a possible interme- diate-term base. Potential ups e but most of them seem to center around the figure of 860 i . a gical target, since it is also the level at which the heavy overhead u J1 d he 1965- 66 top first manifests itself. As yet, the Average has been u 0 ea t of this range by penetrating the September high. Were it to fail to follow thro h a eturn to the lower part of the trading range, the base would, of course, be broadene It is tempting to guess what might follow a rise to the 860 level. Were such an immediate rise to take place, the Average would have run out the upside implications of the base that now exists and a new pattern would have to form in order to indicate higher levels. Part of such a pattern could very well be a decline back to around present levels, or even a move to new low territory. Obviously, it is impossible to guess preCisely what will take place until the picture unfolds further. However, we would suspect that even were the market to drop back to new lows after such an advance, a great many stocks would fail to return to their present levels. For the shorter-term, the picture is less clear. Most of our short-term oscillators have reached would indicate, at least, that some consolidation must take place before the advance is extended and the September highs are penetrated. How low such consolidation might take the Dow is uncertain, but strong support exists in the en- tire 790-775 area. In the light of a market outlook such as the One described above, we continue to re- iterate the basic investment philosophy expressed by this letter since last August. It is that the investor should utilize market weakness for the commission of reserves to stocks which are technically attractive and which appear, fundamentally, fairly priced in relation to prospective earning power. ANTHONY W. TABELL Dow-Jones Ind. 805.06 WALSTON & CO. INC. Dow-Jones Rails 199.66 AWTamb Tbll market letter ill published for your convemence and Information and Is not an offer to sell or a aolldt&.tlon to bu), any aeeurltlea formation waa obtained from eourcea we believe to be reliable. but we do not guarantee Ita nccuracy Walston & Co Inc and ltl ftI eupioyee. may have an fnterm in or pupchaae and sell the 8eenritles referred to herein. .,. 0 eers, dl 'eeTtobc . In- r fa or WN.801