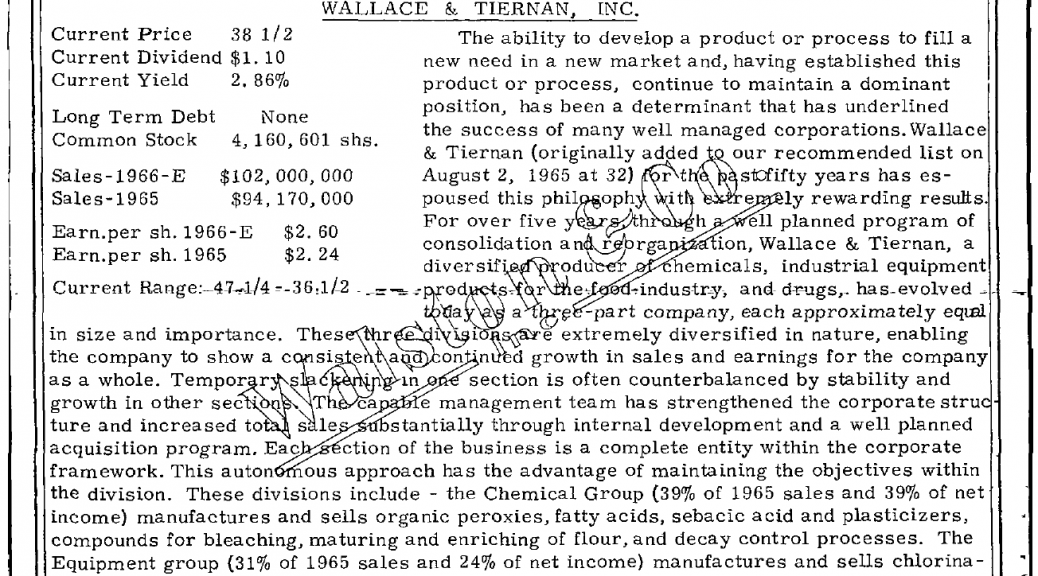 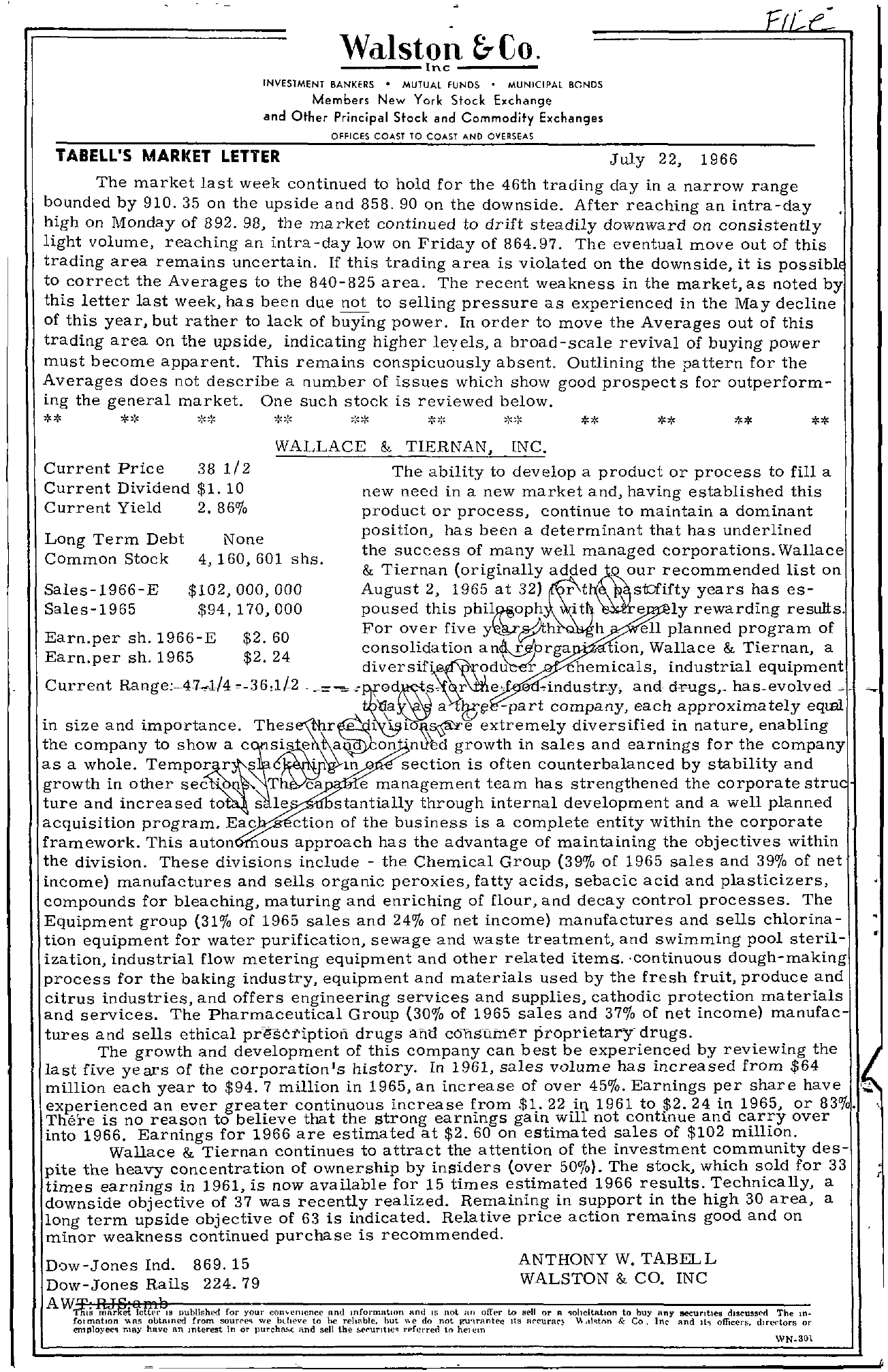 Walston &Co. ———lnc ——–INVESTMENT BANKERS MUTUAL FUNDS MUNICIPAL BONDS Members New York Stock Exchange and Other Principal Stock and Commodity Exchanges OFFICES COAST TO COAST AND OVERSEAS TABEll'S MARKET lETTER J u1Y 22, 1966 The market last week continued to hold for the 46th trading day in a narrow range by 910. 35 on the upside and 858. 90 on the downside. After reaching an intra-day on Monday of 892. 98, the market continued to drift steadily downward on consistently llght volume, reaching an intra-day low on Friday of 864.97. The eventual move out of this trading area remains uncertain. If this trading area is violated on the downside, it is possibl to correct the Averages to the 840-825 area. The recent weakness in the market, as noted by this letter last week, has been due not to selling pressure as experienced in the May decline of this year, but rather to lack of buying power. In order to move the Averages out of this trading area on the upside, indicating higher levels, a broad-scale revival of buying power must become apparent. This remains conspicuously absent. Outlining the pattern for the Averages does not describe a number of issues which show good prospect s for outperforming the general market. One such stock is reviewed below. WALLACE & TIERNAN, INC. Current Price 38 1/2 Current Dividend 1. 10 Current Yield 2. 860/0 Long Term Debt None COmmon Stock 4,160,601 shs. Sales-1966-E 102,000,000 Sales-1965 94,170,000 The ability to develop a product or process to fill a new need in a new market and, having established this product or process, continue to maintain a dominant position, has been a determinant that has underlined the success of many well managed corporations. Wallace & Tiernan (originally recommended list on August 2, 1965 at siDfifty years has es- poused this it e ly rewarding resulis. Earn.per sh. 1966-E 2.60 For over five E arn.per sh 1965 ' d2.24 consolidation 'lVerSi 0 u r h ell planned program of ion, Wallace & Tiernan, a hem'ica1s, i.nd ustriaI equi.pment Current -36,1/-2 ..'' r e, and d'l'ugs, has-evolved . a -part company, each approximately eqUll in size and importance. \. 1 extremely diversified in nature, enabling the company to show a e growth in sales and earnings for the company as a whole. . in section is often counterbalanced by stability and growth in other sec' ThJ ca e management team has strengthened the corporate stru ture and increased to s Ie stantially through internal development and a well planned acquisition program. Eac ction of the business is a complete entity within the corporate framework. This auton ous approach has the advantage of maintaining the objectives within the division. These divisions include – the Chemical Group (390/0 of 1965 sales and 390/0 of net income) manufactures and sells organic peroxies, fatty acids, sebacic acid and plasticizers, compounds for bleaching, maturing and enriching of flour, and decay control processes. The Equipment group (310/0 of 1965 sales and 240/0 of net income) manufactures and sells chlorina- tion equipment for water purification, sewage and waste treatment, and swimming pool steril- ization, industrial flow metering equipment and other related items. continuous dough-making process for the baking industry, equipment and materials used by the fresh fruit, produce and citrus industries, and offers engineering services and supplies, cathodic protection materials and services. The Pharmaceutical Group (300/0 of 1965 sales and 370/0 of net income) manufac- tures and sells ethical pr-esctiption drugs and cCfflSumer proprietary drugs. The growth and development of this company can best be experienced by reviewing the last five years of the corporation's history. In 1961, sales volume has increased from 64 million each year to 94.7 million in 1965, an increase of over 450/0. Earnings per share have experienced an ever greater continuous increase 1.. 22 .i111961 to 2.24 in 1965, or 830/0. The're is no reason to believe that the strong earmngs gam will not continue and carryover into 1966. Earnings for 1966 are estimated at 2. 60 on estimated sales of 102 million. Wallace & Tiernan continues to attract the attention of the investment community des- pite the heavy concentration of ownership by insiders (over 500/0). The stock, which s.old for 33 times earnings in 1961, is now available for 15 times estimated 1966 results. Techmcally, a downside objective of 37 was recently realized. Remaining in support in the high 30 area, a long term upside objective of 63 is indicated. Relative price action remains good and on I minor weakness continued purchase is recommended. D')w-Jones Ind. 869.15 Dow-Jones Rails 224.79 ANTHONY W. TABELL WALSTON & CO. INC A W IS mnr e Ie ter 19 published for your and mformatlOn IS not lin offer to sell OT 1\ 'loilcltatlon to buy any securities dlSl'ugsed TnI' In- fOlmation as obuuned Cram sourC'e'l we blheve to he relHlble, but I' do not g\l'lrantee Its ,II'Iton & Co, InC' and it., officers, dlr('('tors or emloyee'l raay have an mterest In or purcha.,(. and sell the rfferred to helcm WN301 J,