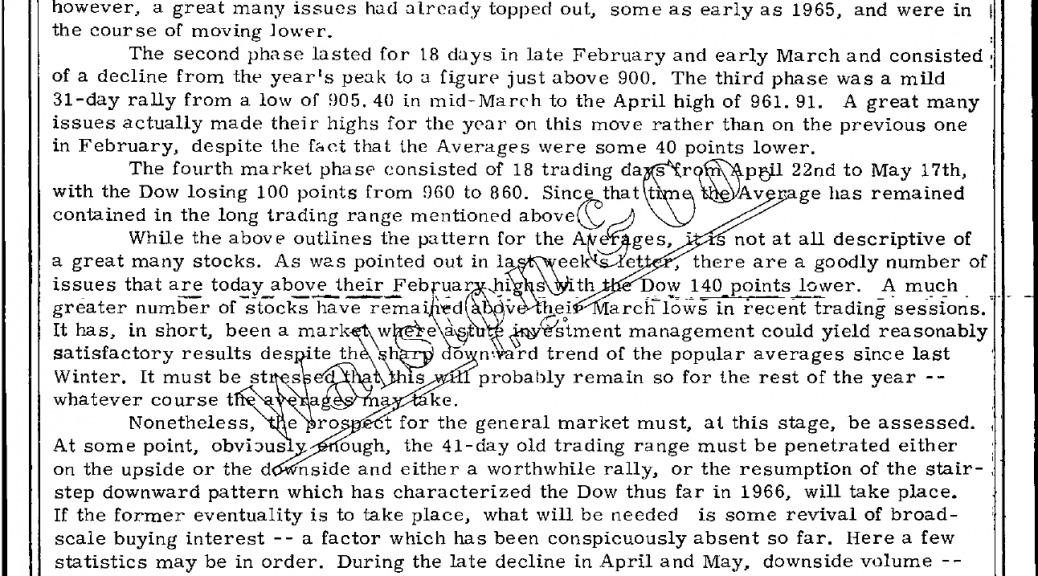 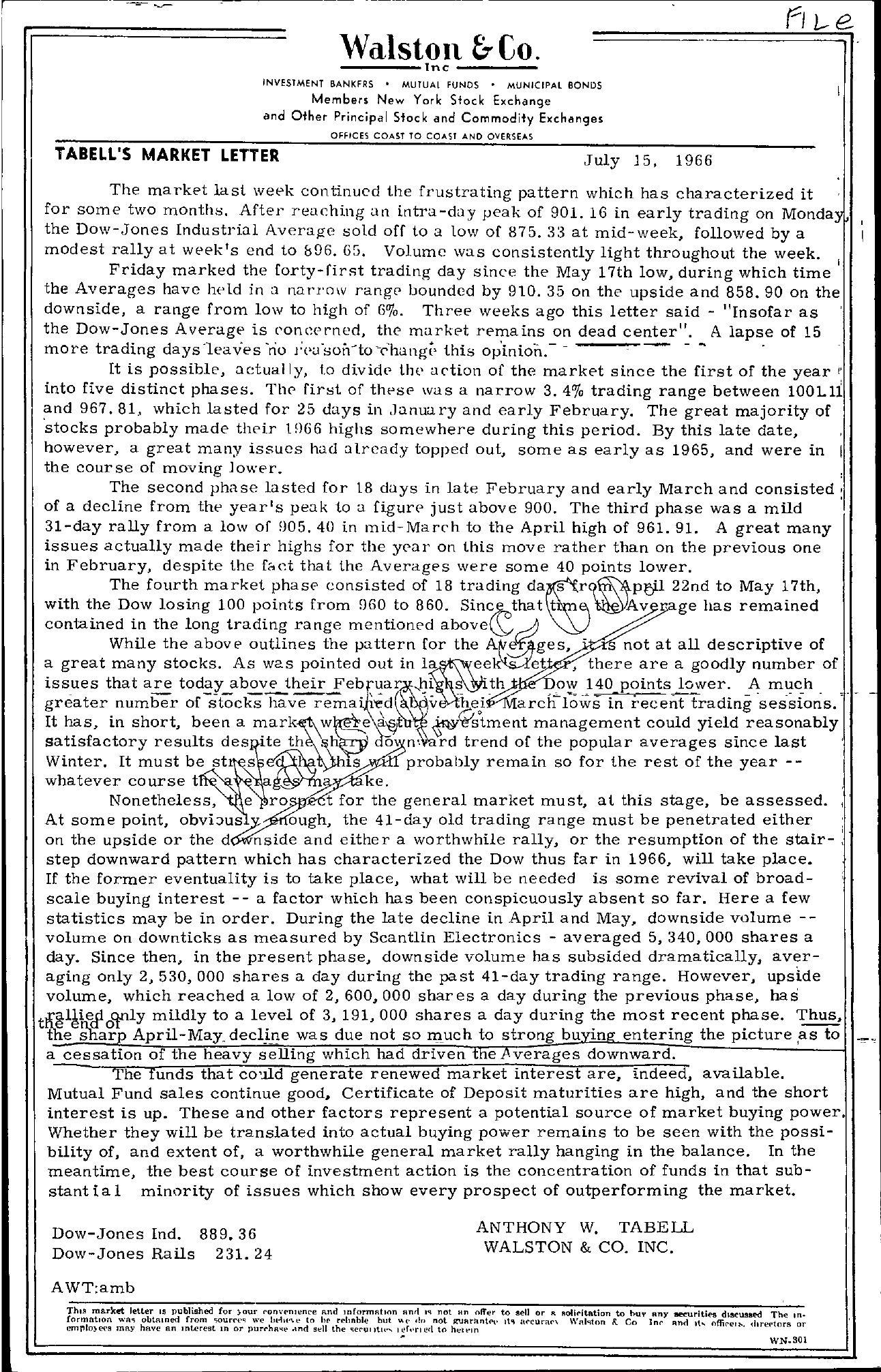 —- ——— Walston &- Co. Inc INVESTMENT BANKFRS MUTUAL FUNOS MUNICIPAL BONDS Members New York Stock Exchange and Other Principal Stock and Commodity Exchanges TABELl'S MARKET lETTER OFFICES COAST TO COAST AND OVERSEAS July J5, 1966 rJ 1…- e The market last week continued the frustrating pattern which has characterized it for some two months. After reaching an intra-duy peak of 901. 16 in early trading on Monda the Dow-Jones Industrial Average sold off to a low of 875. 33 at mid-week, followed by a modest rally at week's end to flD6. Ge;. Volumc was consistently light throughout the week. Friday marked the forty-first trading day since the May 17th low, during which time I the Averages have held in u narrow range bounded by 910.35 on the upside and 858.90 on the downside, a range from low to high of G. Three weeks ago this letter said – Insofar as the Dow-Jones Average is l'oncprned, the market remains on dead center. A lapse of 15 more trading days 'leaves 'rio ihis op'inion.- – – It is possible, actually, to dividp till' udion of the market since the first of the year I' into five distinct phases. TIl' first of these was a narrow 3.4 trading range between 100L11 967.81, which lasted for 25 days in ,January and early February. The great majority of stocks probably made tll'ir U1G6 highs somewhere during this period. By this late date, however, a great many issues hud already topped out, some as early as 1965, and were in the course of moving lower. The second phase lasted for 18 days in late February and early March and consisted, of a decline from the year's peak to a figure just above 900. The third phase was a mild ' 31-day rally from a low of D05. 40 in mid-March to the April high of 961. 91. A great many issues actually made their highs for the YE'ar On this move rather than on the previous one in February, despite the fd that the Averages were some 40 points lower. The fourth market phase consisted of 18 trading 22nd to May 17th, with the Dow losing 100 points from DGO to 860. Since that tr page has remained contained in the long trading range mentioned While the above outlines the pattern for the s not at all descriptive of a great many stocks. As was pointed out in ,there are a goodly number of issues that are today above their greater number ofstocks havuemai s 'th ow 140 points lower. A much he,i arch-(ows in recent trading 'sessions. It has, in short, been a satisfactory results des 'te th management could yield reasonably 0 n' rd trend of the popular averages since last ' Winter. It must be st s 15 probably remain so for the rest of the year — whatever course t ke. Nonetheless, e ro t for the general market must, at this stage, be assessed. , At some point, obvims ough, the 41-day old trading range must be penetrated either . on the upside or the d nside and either a worthwhile rally, or the resumption of the stair- step downward pattern which has characterized the Dow thus far in 1966, will take place. If the former eventuality is to take place, what will be needed is some revival of broad- scale buying interest — a factor which has been conspicuously absent so far. Here a few statistics may be in order. During the late decline in April and May, downside volume — volume on downticks as measured by Scantlin Electronics – averaged 5, 340,000 shares a day. Since then, in the present phase, downside volume has subsided dramatically, aver- aging only 2, 530,000 shares a day during the past 41-day trading range. However, upside volume, which reached a low of 2, 600,000 shar es a day during the previous phase, has ff!11y mildly to a level of 3,191,000 shares a day during the most recent phase. Thus, tfie April-May, decl,ine was due not so much to strong bu in entering the picture ,as to a cessation of the heavy selling which had driven t e verages downward. The funds that co'lid generate renewed market interest are, indeed, available. Mutual Fund sales continue good. Certificate of Deposit maturities are high, and the short interest is up. These and other factors represent a potential source of market buying power Whether they will be translated into actual buying power remains to be seen with the possi- bility of, and extent of, a worthwhile general market rally hanging in the balance. In the meantime, the best course of investment action is the concentration of funds in that sub- stantial minority of issues which show every prospect of outperforming the market. Dow-Jones Ind. 889.36 Dow-Jones Rails 231. 24 ANTHONY W. TABELL WALSTON & CO. INC. AWTamb ThiS market letter IS published for lour ron\'('numce and mformatlon nri 1'1 not Itn offer to sell or R lIoIll'itntion to houy Rny aeeurltiE'S dlst'usllE'd The In. formation WI\; obtained from WI.' hl'!W\e to h(l rehabh.' but …. 1' .\ not InlRrhntl'( It'I u('cUrn('\ \\'1\1'Iton So. Co lnr Rnd cm\'lIO)el'9 may have an mt('rest In or pUrrhR'Il' .md Sl'lI the 'Il'l'l,Illtl.., I ('f.'rl ell to he!ln offi!'('! Ilr ,t S 0 1'0. ( e( or r WN.301