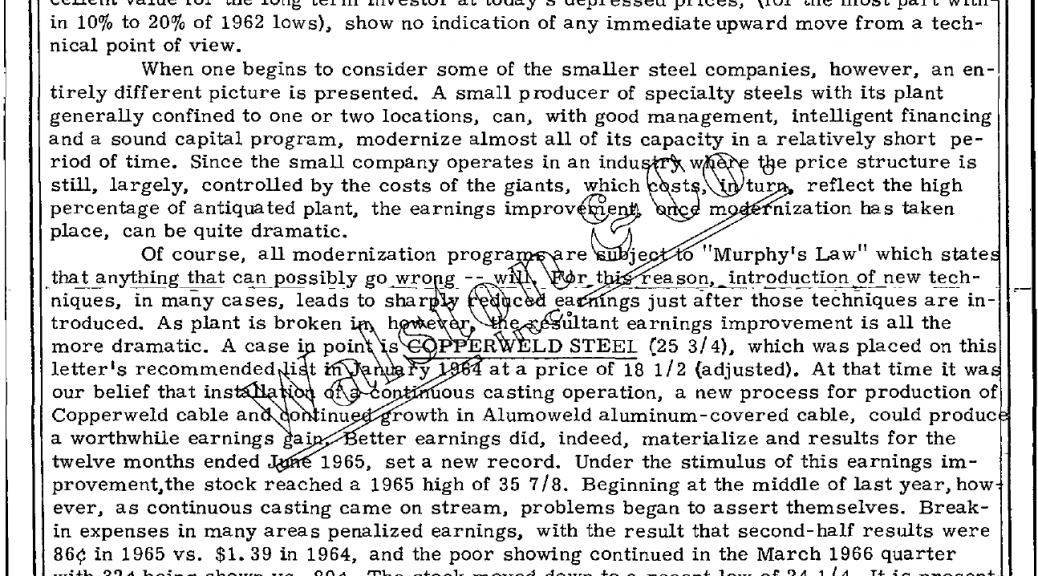 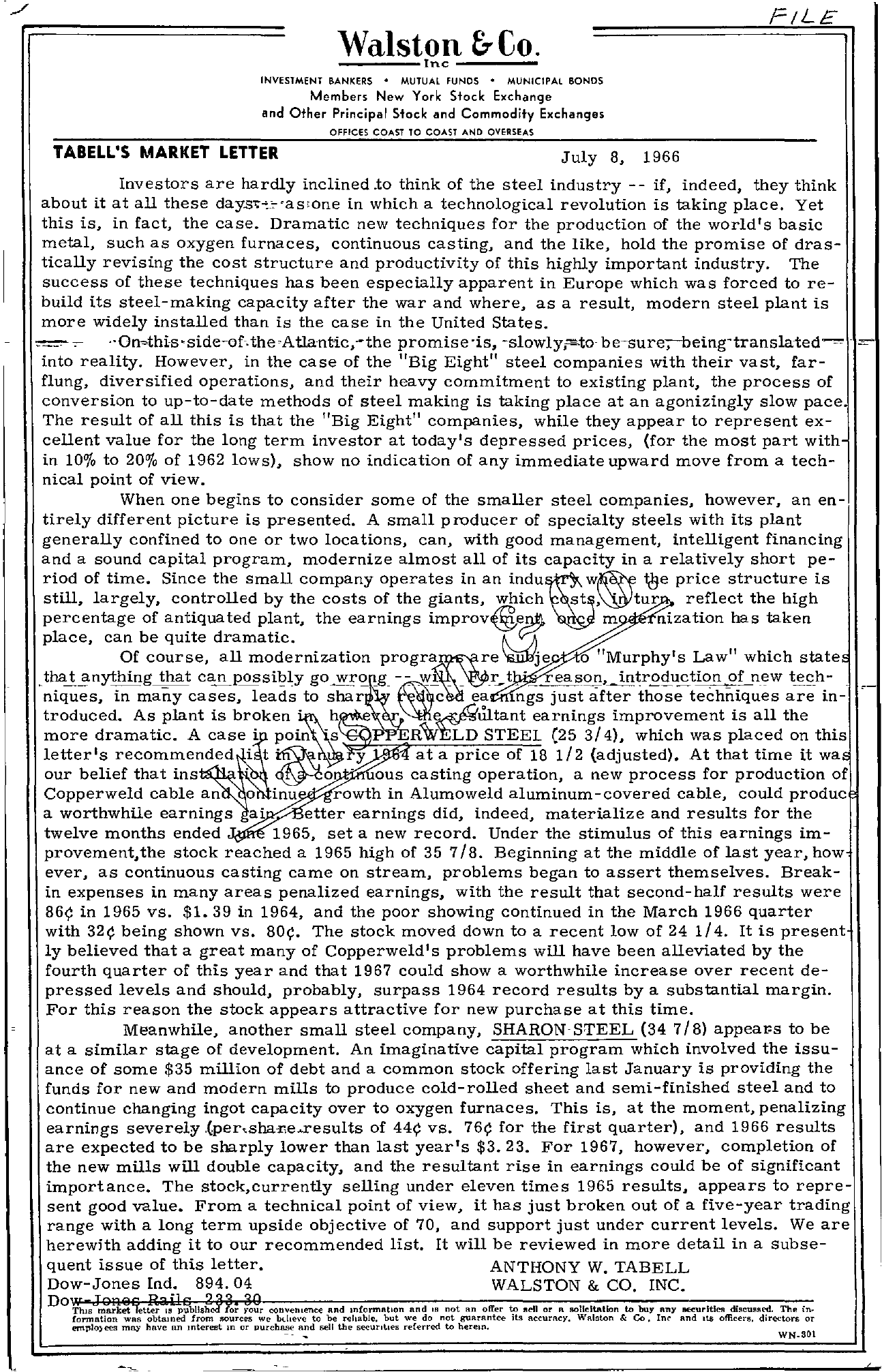 Walston &Co. —–Inc —-INVESTMENT BANKERS MUTUAl FUNDS MUNICIPAL BONDS Members New York Stock Exchange and Other Principal Stock and Commodity Exchanges OFFices COAST TO COAST AND OVERSEAS TABEll'S MARKET lETTER July 8, 1966 FILE Investors are hardly inclined ,to think of the steel industry — if, indeed, they think about it at all these day-s,-,,.'as,one in which a technological revolution is taking place. Yet this is, in fact, the case. Dramatic new techniques for the production of the world's basic metal, such as oxygen furnaces, continuous casting, and the like, hold the promise of dras- tically revising the cost structure and productivity of this highly important industry. The success of these techniques has been especially apparent in Europe which was forced to re- build its steel-making capacity after the war and where, as a result, modern steel plant is more widely installed than is the case in the United States. — promise'is, -slowly,-to be-sure-,being'translated– into reality. However, in the case of the Big Eight steel companies with their vast, far- flung, diversified operations, and their heavy commitment to existing plant, the process of conversion to up-to-date methods of steel making is taking place at an agonizingly slow pace The result of all this is that the Big Eight companies, while they appear to represent ex- cellent value for the long term investor at today's depressed prices, (for the most part with in 100/0 to 200/0 of 1962 lows), show no indication of any immediate upward move from a tech- nical point of view. When one begins to consider some of the smaller steel companies, however, an en- tirely different picture is presented. A small producer of specialty steels with its plant generally confined to one or two locations, can, with good management, intelligent financing and a sound capital program, modernize almost all of its capacity in a relatively short pe- riod of time. Since the small company operates in an 18e price structure is still, largely, controlled by the costs of the giants, which st reflect the high percentage of antiquated plant, the earnings place, can be quite dramatic. 1\ ex m nization has taken Of course, all modernization w,that ',-po,ib1y gOEri niques, in many cases, leads to shar 'Sfih'je 0 Murphy's Law which state tehngs just after those techniques are in- troduced. As plant is broken h e earnings improvement is all the more dramatic. A case i poin 's RW1;LD STEEL (25 3/4), which was placed on this letter's recommended i t y at a price of 18 1/2 (adjusted). At that time it wa our belief that ins ous casting operation, a new process for production of Copperweld cable an 0 inu rowth in Alumoweld aluminum-covered cable, could produc a worthwhile earnings etter earnings did, indeed, materialize and results for the twelve months ended 1965, set a new record. Under the stimulus of this earnings im- provement,the stock reached a 1965 high of 35 7/8. Beginning at the middle of last year, how ever, as continuous casting came on stream, problems began to assert themselves. Break- in expenses in many areas penalized earnings, with the result that second-half results were 86 in 1965 vs. 1. 39 in 1964, and the poor showing continued in the March 1966 quarter with 32 being shown vs. 80. The stock moved down to a recent low of 241/4. It is present ly believed that a great many of Copperweld's problems will have been alleviated by the fourth quarter of this year and that 1967 could show a worthwhile increase over recent de- pressed levels and should, probably, surpass 1964 record results by a substantial margin. For this reason the stock appears attractive for new purchase at this time. Meanwhile, another small steel company, SHARON'STEEL (34 7/8) appeal's to be at a similar stage of development. An imaginative capital program which involved the issu- ance of some 35 million of debt and a common stock offering last January is providing the funds for new and modern mills to produce cold-rolled sheet and semi-finished steel and to continue changing ingot capacity over to oxygen furnaces. This is, at the moment, penalizing earnings severely.(per,sha'ne..results of 44 vs. 76 for the first quarter), and 1966 results are expected to be sharply lower than last year's 3.23. For 1967, however, completion of the new mills will double capacity, and the resultant rise in earnings could be of significant importance. The stock,currently selling under eleven times 1965 results, appears to repre- sent good value. From a technical point of view, it has just broken out of a five-year trading range with a long term upside objective of 70, and support just under current levels. We are herewith adding it to our recommended list. It will be reviewed in more detail in a subse- quent issue of this letter. ANTHONY W. TABELL Dow-Jones Ind. 894.04 WALSTON & CO. INC. Do ThiS market etter IS- publish or )'our convemence and informatIOn and IS not an offer to tlell or R solidtAtlon to buy any IlECUrlties diseullS('d, The in. formation was obtained from sources we bdle\'c to be rehable. but we do not guafantce its accumcy. Walnton & Co. In(' and IU; officers. dir(!('tou or emJ'lo)ees may have an mterest In or purchase and sell the securities referred to herein. – – …. WNSOl