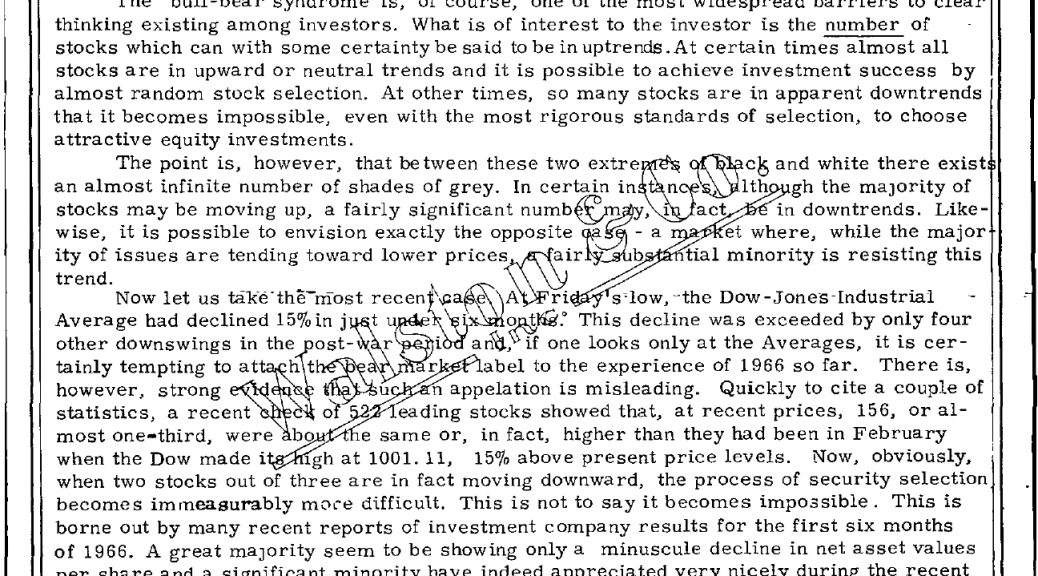 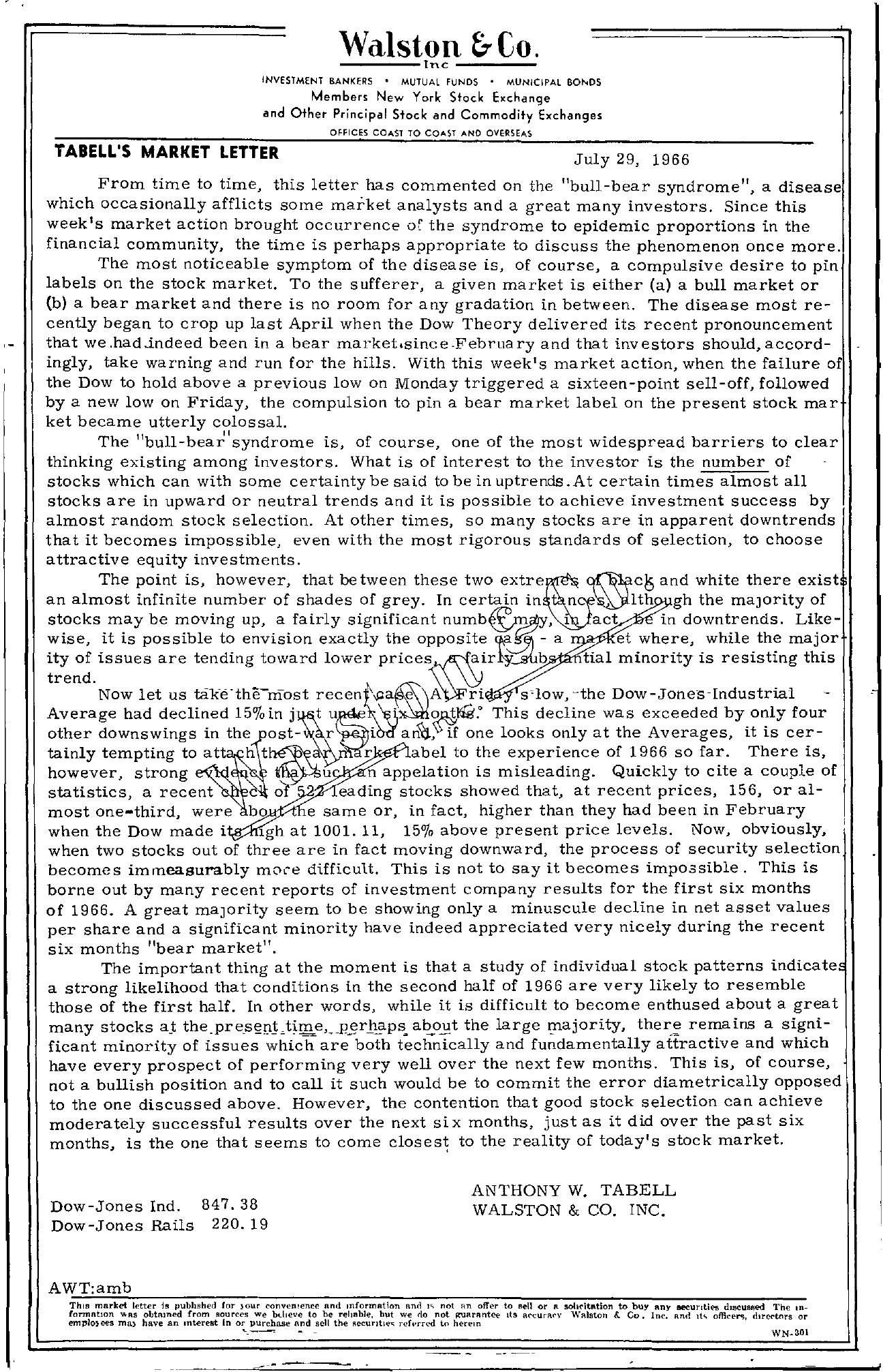 Walston &- Co. Inc INVESTMENT BANKERS MUTUAL FUNDS MUNICIPAL Members New York Stock Exchange and Other Principal Stock and Commodity Exchanges OFFICES COAST TO COAST AND OVERSEAS TABELL'S MARKET LETTER July 29, 1966 From time to time, this letter has commented on the bull-bear syndrome, a disease which occasionally afflicts some market analysts and a great many investors. Since this week's market action brought occurrence of the syndrome to epidemic proportions in the financial community, the time is perhaps appropriate to discuss the phenomenon once more. The most noticeable symptom of the disease is, of course, a compulsive desire to pin labels on the stock market. To the sufferer, a given market is either (a) a bull market or (b) a bear market and there is no room for any gradation in between. The disease most re- cently began to crop up last April when the Dow Theory delivered its recent pronouncement that we ,had.indeed been in a bear market-since -Februa ry and that investors should, accord- ingly, take warning and run for the hills. With this week's market action, when the failure of the Dow to hold above a previous low on Monday triggered a sixteen-point sell-off, followed by a new low on Friday, the compulsion to pin a bear market label on the present stock mar ket became utterly colossal. The bull-bearsyndrome is, of course, One of the most widespread barriers to clear thinking existing among investors. What is of interest to the investor is the number of stocks which can with some certainty be said to be in uptrends. At certain times almost all stocks are in upward or neutral trends and it is possible to achieve investment success by almost random stock selection. At other times, so many stocks are in apparent downtrends that it becomes impossible, even with the most rigorous standards of selection, to choose attractive equity investments. The point is, however, that between these two and white there exist an almost infinite number of shades of grey. In certain in n Wlth gh the maJority of stocks may be moving up, a fairly significant 1 act in downtrends. Like- wise, it is possible to envision exactly the opposite – a et where, while the major ity of issues are tending toward lower tial minority is resisting this Now let us take-the-rrfost ri -the Dow-Jones-Industriai – Average had declined 150/0 in This decline was exceeded by only four other downswings in the ost- r i ariil., if one looks only at the Averages, it is cer- tainly tempting to att h r abel to the experience of 1966 so far. There is, however, strong n appelation is misleading. Quickly to cite a couple of statistics, a recent 01 eading stocks showed that, at recent prices, 156, or al- most one-third, were bo e same or, in fact, higher than they had been in February when the Dow made i gh at 1001. 11, 15 above present price levels. Now, obviously, when two stocks out of three are in fact moving downward, the process of security selection becomes immeasurably mace difficult. This is not to say it becomes imp03sible. This is borne out by many recent reports of investment company results for the first six months of 1966. A great maJority seem to be showing only a minuscule decline in net asset values per share and a significant minority have indeed appreciated very nicely during the recent six months bear market. The important thing at the moment is that a study of individual stock patterns indicate a strong likelihood that conditions in the second half of 1966 are very likely to resemble those of the first half. In other words, while it is difficult to become enthused about a great many stocks a.t the large majority, remains a signi- ficant minority of issues which are both technically and fundamentally attractive and which have every prospect of performing very well over the next few months. This is, of course, not a bullish position and to call it such would be to commit the error diametrically opposed to the one discussed above. However, the contention that good stock selection can achieve moderately successful results over the next six months, just as it did over the past six months, is the one that seems to come closest, to the reality of today's stock market. — Dow-Jones Ind. 847.38 Dow-Jones Rails 220.19 ANTHONY W. TABELL WALSTON & CO. INC. AWTamb ThiS market letter is pubhshed for our convenience fLnd mformlltlon Rno ' not an offer to sell or II soil('ita.tion to buy Any !leC'!urlti(S dlS(!usfied The In- formatIOn 'RS obtmned from sources we bt-lieve to be rellable, but we rlo not Its tH'curRrv 'RIston &.. Co. Inc. Rnd It. officeI'). dlr(''tors or emJ'lo)ees mil) have an mterest in or vurchase nnd sell the secuntw; ref.rrell to herem ——… –