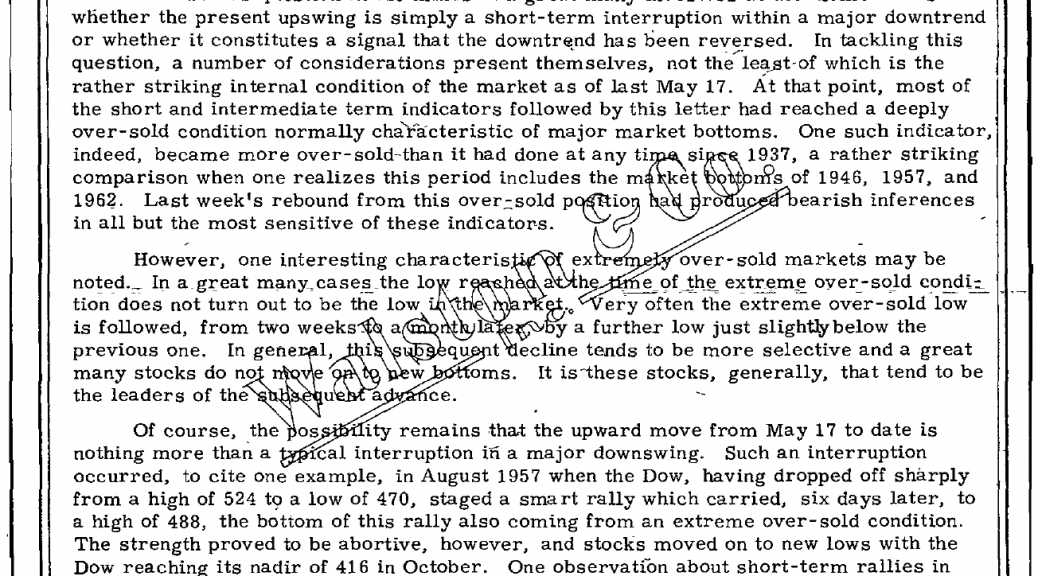 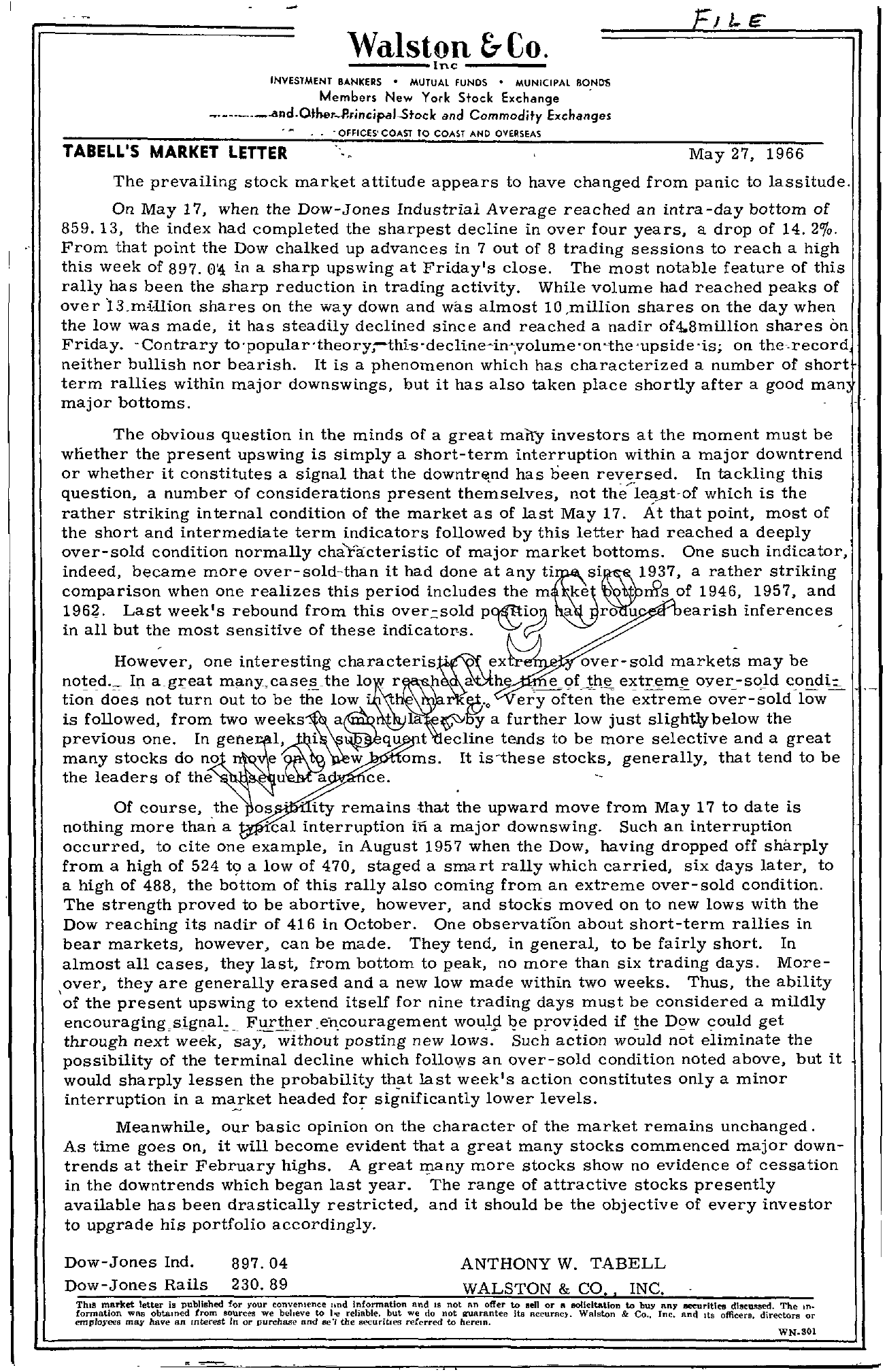 – Walston &- Co. Inc INVESTMENT BANKERS MUTUAL FUNDS MUNICIPAL BONOS Members New York Stock Exchange . and Commodity Exchanges – OFFICES' COAST TO COAST AND OVERSEAS TABELL'S MARKET LETTER May 27, 1966 The prevailing stock market attitude appears to have changed from panic to lassitude. On May 17, when the Dow-Jones Industrial Average reached an intra-day bottom of 859.13, the index had completed the sharpest decline in over four years, a drop of 14.20/0. From that point the Dow chalked up advances in 7 out of 8 trading sessions to reach a high this week of 897. in a sharp upswing at Friday's close. The most notable feature of this rally has been the sharp reduction in trading activity. While volume had reached peaks of over 13.mi-llion shares on the way down and was almost lO,million shares on the day when the low was made, it has steadily declined since and reached a nadir of4.8million shares on Friday, -Contrary on the.record neither bullish nor bearish. It is a phenomenon which has characterized a number of short term rallies within major downswings, but it has also taken place shortly after a good man major bottoms. The obvious question in the minds of a great many investors at the moment must be wliether the present upswing is simply a short-term interruption within a major downtrend or whether it constitutes a signal that the downtre.nd has been rev;rsed. In tackling this question, a number of considerations present themselves, not the lell.fit-of which is the rather striking internal condition of the market as of last May 17. At that point, most of the short and intermediate term indicators followed by this letter had reached a deeply over-sold condition normally chaYacteristic of major market bottoms. One such indicator, indeed, became more over-sold-than it had done at any a rather striking comparison when one realizes this period includes the m ke t rRs of 1946, 1957, and 1962. Last week's rebound from this over.sold poanio9J a ro u earish inferences -in all but the most sensitive of these indicator-so \yV However, one interesting over-sold markets may be – noted. In a.gr-eat manY,cases.the tion'does not turn out to be the low . a he . extremf! oyer-sojd condi,- ery often' the extreme over-sold'low- is followed, from two J1i a further low just sligh1lbelow the previous one. In gene t ecline tends to be more selective and a great many stocks do no e w oms. It is'ihese stocks, generally, that tend to be the leaders of the u ace. — Of course, the os – – ity remains .that the upward move from May 17 to date is nothing more than a 'cal interruption in a major downswing. Such an interruption occurred, to cite one example, in August 1957 when the Dow, having dropped off sharply from a high of 524 t9 a low of 470, staged a smart rally which carried, six days later, to a high of 488, the bottom of this rally also coming from an extreme over-sold condition. The strength proved to be abortive, however, and stocks moved on to new lows with the Dow reaching its nadir of 416 in October. One observation about short-term rallies in bear markets, however, can be made. They tend, in general, to be fairly short. In almost all cases, they last, from bottom to peak, no more than six trading days. More- ,over, they are generally erased and a new low made within two weeks. Thus, the ability of the present upswing to extend itself for nine trading days must be considered a mildly Further .e-ncouragement woulfl ie if !he D()w could get through next week, say, without posting new lows. Such action would not eliminate the possibility of the terminal decline which follows an over-sold condition noted above, but it would sharply lessen the probability th-t last week's action constitutes only a minor interruption in a headed for significantly lower levels. Meanwhile, our basic opinion on the character of the market remains unchanged. As time goes on, it will become evident that a great many stocks commenced major downtrends at their February highs. A great lllany more stocks show no evidence of cessation in the downtrends which began last year. The range of attractive stocks presently available has been drastically restricted, and it should be the objective of every investor to upgrade his portfolio accordingly. Dow-Jones Ind. 897.04 ANTHONY W. TABELL Dow-Jones Rails 230.89 WALSTON & CO. J INC. market letter is published for your lind Information and IS not an offer to lIell or solicitation to buy an)' aeeurltles discussed. The In- fonnatlon WAS obtamed from sources we bt'heve to loe reliable. but we do not guarantee ita accurflC. Walston & Co.. Inc. and Its officers directors or emrrloyees may have an mterest In or purchase Ilnd Be'j the 11I!'CUritles referred to herem. WNSOI