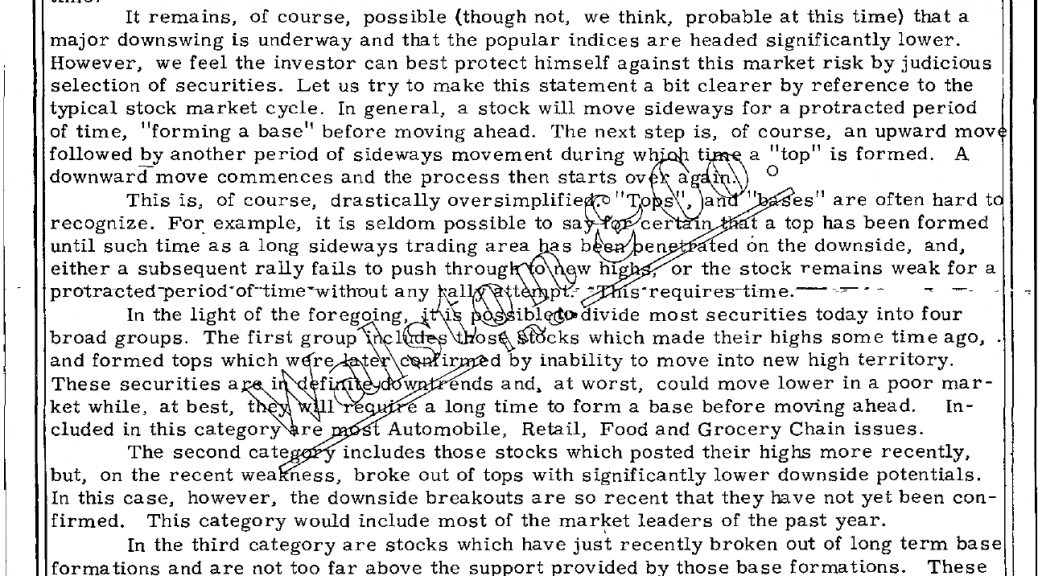 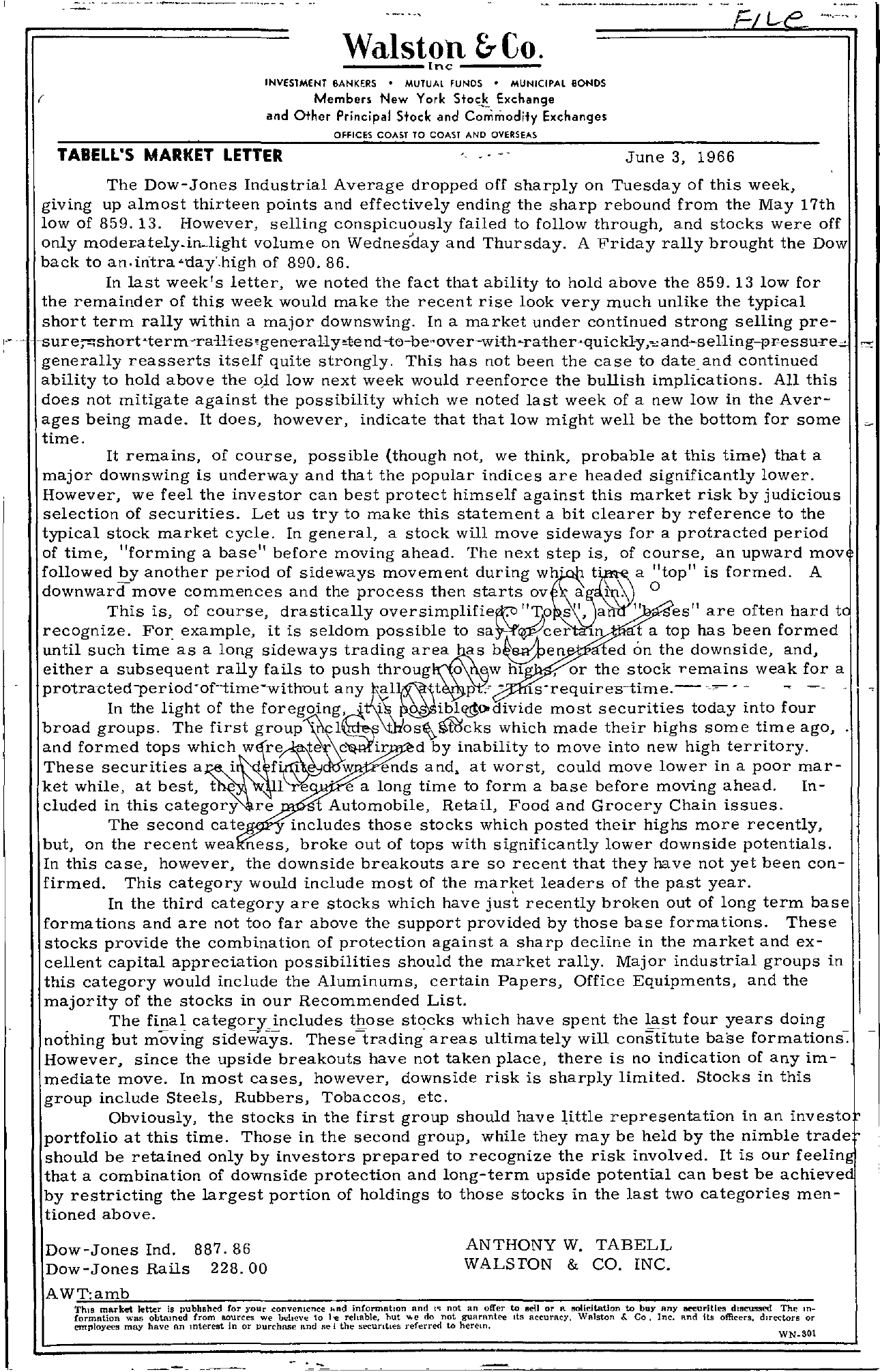 Walston &Co. Inc INVESTMENT BANKERS MUTUAL FUNDS MUNlClPAl eONDS ( Members New York Exchange and Other Principal Stock and Commodity Exchanges OFFICES COAST TO COAST AND OVERSEAS TABELL'S MARKET LETTER June 3, 1966 …… . The Dow-Jones Industrial Average dropped off sharply on Tuesday of this week, glVlng up almost thirteen points and effectively ending the sharp rebound from the May 17th low of 859.13. However, selling conspicuously failed to follow through, and stocks were off only moderately.ino-light volume on Wednesday and Thursday. A Friday rally brought the Dow back to an.iritrat1ay.high of 890.86. In last week's letter, we noted the fact that ability to hold above the 859.13 low for the remainder of this week would make the recent rise look very much unlike the typical short term rally within a major downswing. In a market under continued strong selling pre- ,-' — – generally reasserts itself quite strongly. This has not been the case to date, and continued ability to hold above the oJd low next week would reenforce the bullish implications. All this does not mitigate against the possibility which we noted last week of a new low in the Aver- ages being made. It does, however, indicate that that low might well be the bottom for some time. It remains, of course, possible (though not, we think, probable at this time) that a major downswing is underway and that the popular indices are headed significantly lower. However, we feel the investor can best protect himself against this market risk by judicious selection of securities. Let us try to make this statement a bit clearer by reference to the typical stock market cycle. In general, a stock will move sideways for a protracted period of time, forming a base before moving ahead The next step is, of course, an upward mov followed by another period of sideways movement during a top is formed. A downwardmove commences and the process then starts ov a r. 0 This is, of course, drastically oversimplifief\l 'ro s, an es are often hard t recognize. For example, it is seldom possible to 1 t a top has been formed until such time as a long sideways trading ted on the downside, and, either a subsequent rally fails to push throug 0 w hi ,or the stock remains weak for a protracted–period'of'-time-without In the light of the r p c' – is'requires-time.– —-' – – – , most securities today into four broad groups. The first which made their highs some time ago, and formed tops which w c ir d by inability to move into new high territory. These securities a i f' 1 wends and. at worst, could move lower in a poor mar- ket while, at best, t 11 e . e a long time to form a base before moving ahead. In- cluded in this category t Automobile, Retail, Food and Grocery Chain issues. The second cate includes those stocks which posted their highs more recently, but, on the recent wea ness, broke out of tops with significantly lower downside potentials. In this case, however, the downside breakouts are so recent that they have not yet been con- firmed. This category would include most of the leaders of the past year. In the third category are stocks which have just recently broken out of long term base formations and are not too far above the support provided by those base formations. These stocks provide the combination of protection against a sharp decline in the market and ex- cellent capital appreciation possibilities should the market rally. Major industrial groups in this category would include the Aluminums, certain Papers, Office Equipments, and the majority of the stocks in our Recommended List. The final categoryincludes tJ1.ose stocks which have spent the last four years doing nothing but moving sideways. These-trading areas ultimately will constitute base However, since the upside breakouts have not taken place, there is no indication of any im- mediate move. In most cases, however, downside risk is sharply limited. Stocks in this group include Steels, Rubbers, Tobaccos, etc. Obviously, the stocks in the first group should have representation in an investo portfolio at this time. Those in the second group, while they may be held by the nimble trade should be retained only by investors prepared to recognize the risk involved. It is our feelin that a combination of downside protection and long-term upside potential can best be achieve by restricting the largest portion of holdings to those stocks in the last two categories men- tioned above. Dow-Jones Ind. 887.86 Dow-Jones Rails 228.00 ANTHONY W. TABELL WALSTON & CO. INC. AWTamb Thill market letter \s Ilubbshed for your convemence I.nd inCoMnatlon and l'l not an offer to lleil or It olicitatlon to buy Any securities discussed The m (ormntion was obtnmed from BOurces we believe to l'e rehable, hut Vd.' do not guarantee Its accuracy. \Vnlston &. Co, Inc. and Its officers, dIrectors or employees may have An Interest in or purchase and fie I the securities referrtd to herein. WNSOI .-