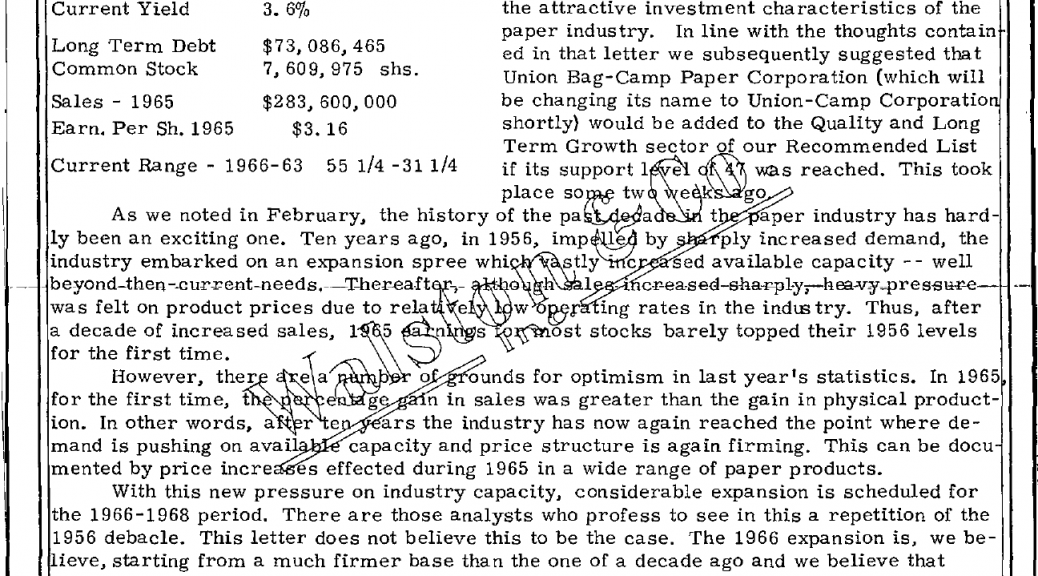 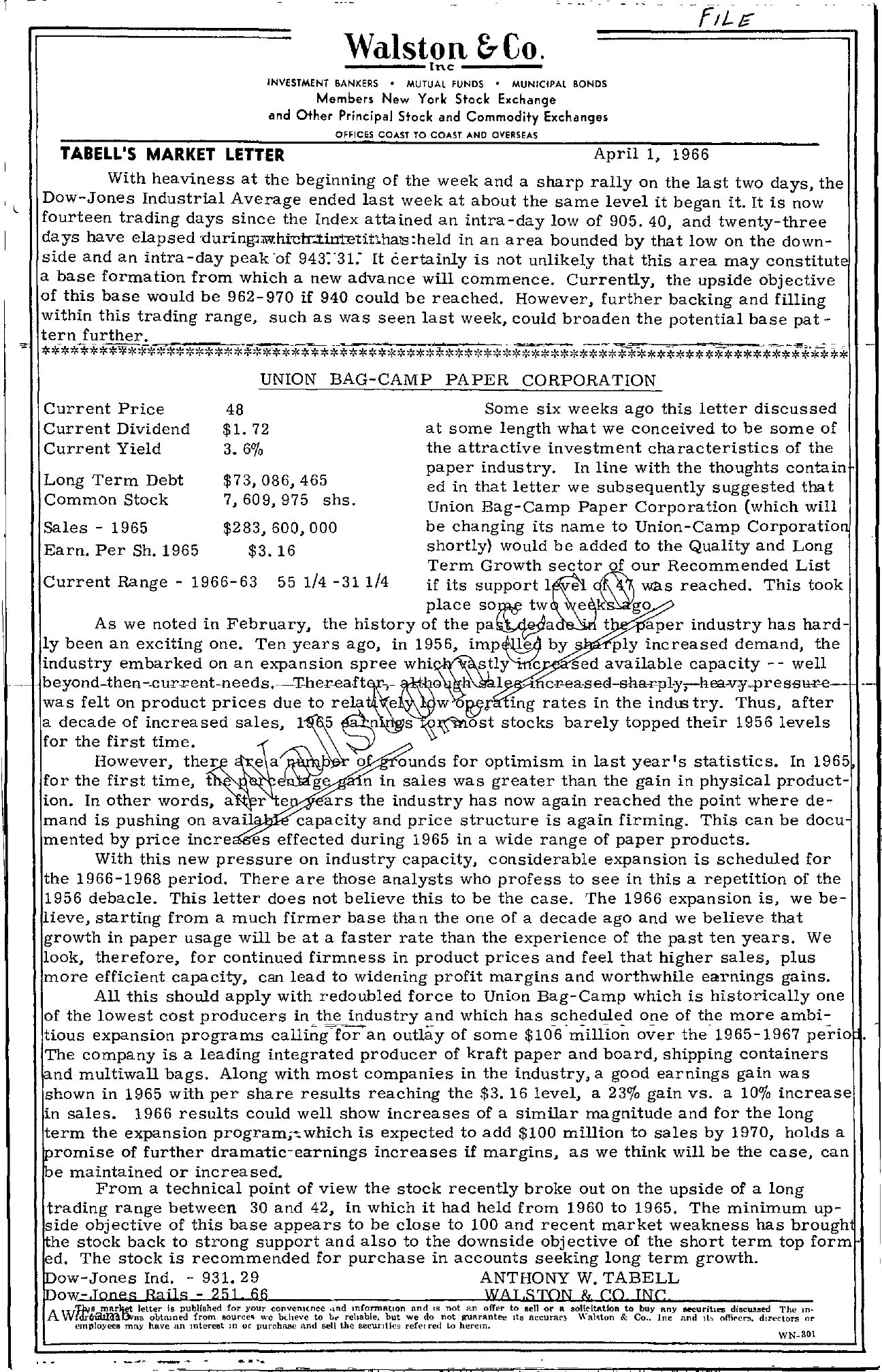 Walston &Co. Inc INVESTMENT BANKERS MUTUAL fUNDS MUNICIPAL BONDS Members New York Siock Exchange and Other Principal Stock and Commodity Exchanges OFFICES COAST TO COAST AND OVERSEAS TABEll'S MARKET lETTER April 1, 1966 With heaviness at the beginning of the week and a sharp rally on the last two days, the , l Dow-Jones Industrial Average ended last week at about the same level it began it. It is now fourteen trading days since the Index attained an intra-day low of 905.40, and twenty-three days have elapsed 'duringuwhi11r.tirltetitlhalsheld in an area bounded by that low on the downside and an intra-day peak -of 943'31 It certainly is not unlikely that this area may constitut a base formation from which a new advance will commence. Currently, the upside objective of this base would be 962-970 if 940 could be reached. However, further backing and filling within this trading range, such as was seen last week, could broaden the potential base pattern further. – UNION BAG-CAMP PAPER CORPORATION Current Price 48 Some six weeks ago this letter discussed Current Dividend Current Yield Long Term Debt Common Stock 1. 72 3. 60/0 73,086,465 7,609,975 shs. a t some length what we conceived to be some of the attractive investment characteristics of the paper industry. In line with the thoughts contain ed in that letter we subsequently suggested that Union Bag-Camp Paper Corporation (which will Sales – 1965 283,600,000 Earn. Per Sh. 1965 3.16 Current Range – 1966-63 55 1/4 -311/4 be changing its name to Union-Camp Corporatio shortly) would be added to the Quality and Long Term Growth sector of our Recommended List if its support was reached. This took place As we noted in February, the history of the e 't aper industry has hard- ly been an exciting one. Ten years ago, in 1956, by ply increased demand, the industry embarked on an expansion spree sed available capacity – – well -beYOndthen-'CUretlt-needs. was felt on product prices due to rela e ti 1 – ,- w gJ ing rates in the indlE try. Thus, after a decade of increased sales, for the first time. However, ther e s stocks barely topped their 1956 levels 'yJ a ounds for optimism in last year's statistics. In 1965 for the first time, t n in sales was greater than the gain in physical product- ion. In other words, a r e ars the industry has now again reached the point where de- mand is pushing on avail capacity and price structure is again firming. This can be docu mented by price incre es effected during 1965 in a wide range of paper products. With this new pressure on industry capacity, considerable expansion is scheduled for the 1966-1968 period. There are those analysts who profess to see in this a repetition of the 1956 debacle. This letter does not believe this to be the case. The 1966 expansion is, we be- lieve, starting from a much firmer base than the one of a decade ago and we believe that growth in paper usage will be at a faster rate than the experience of the past ten years. We loOk, therefore, for continued firmness in product prices and feel that higher sales, plus more efficient capacity, can lead to widening profit margins and worthwhile earnings gains. All this should apply with redoubled force to Union Bag-Camp which is historically one of the lowest cost producers inth.eindustry and which has scheduled one of the more ambi- tious expansion programs an outlay of some 10-6 -million over the 1965-1967 perio The company is a leading integrated prOducer of kraft paper and board, shipping containers nd multiwall bags. Along with most companies in the industry, a good earnings gain was shown in 1965 with per share results reaching the 3.16 level, a 230/0 gain vs. a 10 increase in sales. 1966 results could well show increases of a similar magnitude and for the long term the expansion program;which is expected to add 100 million to sales by 1970, holds a romise of further dramatic-earnings increases if margins, as we think will be the case, can e maintained or increased. From a technical point of view the stock recently broke out on the upside of a long trading range between 30 and 42, in which it had held from 1960 to 1965. The minimum upside objective of this base appears to be close to 100 and recent market weakness has brough he stock back to strong support and also to the downside objective of the short term top form ed. The stock is recommended for purchase in accounts seeking long term growth. ow-Jones Ind. – 931. 29 ANTHONY W. TABELL ow-,Tooes Bails – 251 66 WAT.STON & CO INC AW'J.ArB mfLr)r;et letter Is published for your COIlVe-nl(.llce nd mformatlon and IS not an offer to sell or R soIleltRtion to buy ftny lIfturibes discuued The mldiOiiit!ailllvns obtmned from source'! we btheve to t… reliable, but we do not guRrantee ItS aCCurar WRlqton & Co.. Inc and offirers. directors or eml'loye!8 may have an mtere8t m or purchR.Se and sell the securIties refel red to herem. WNSOI