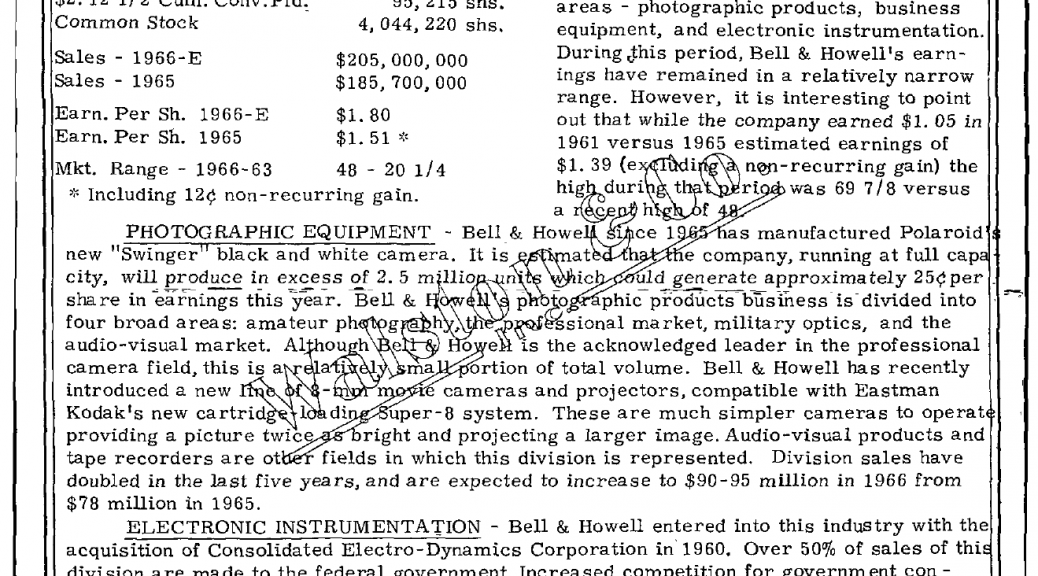 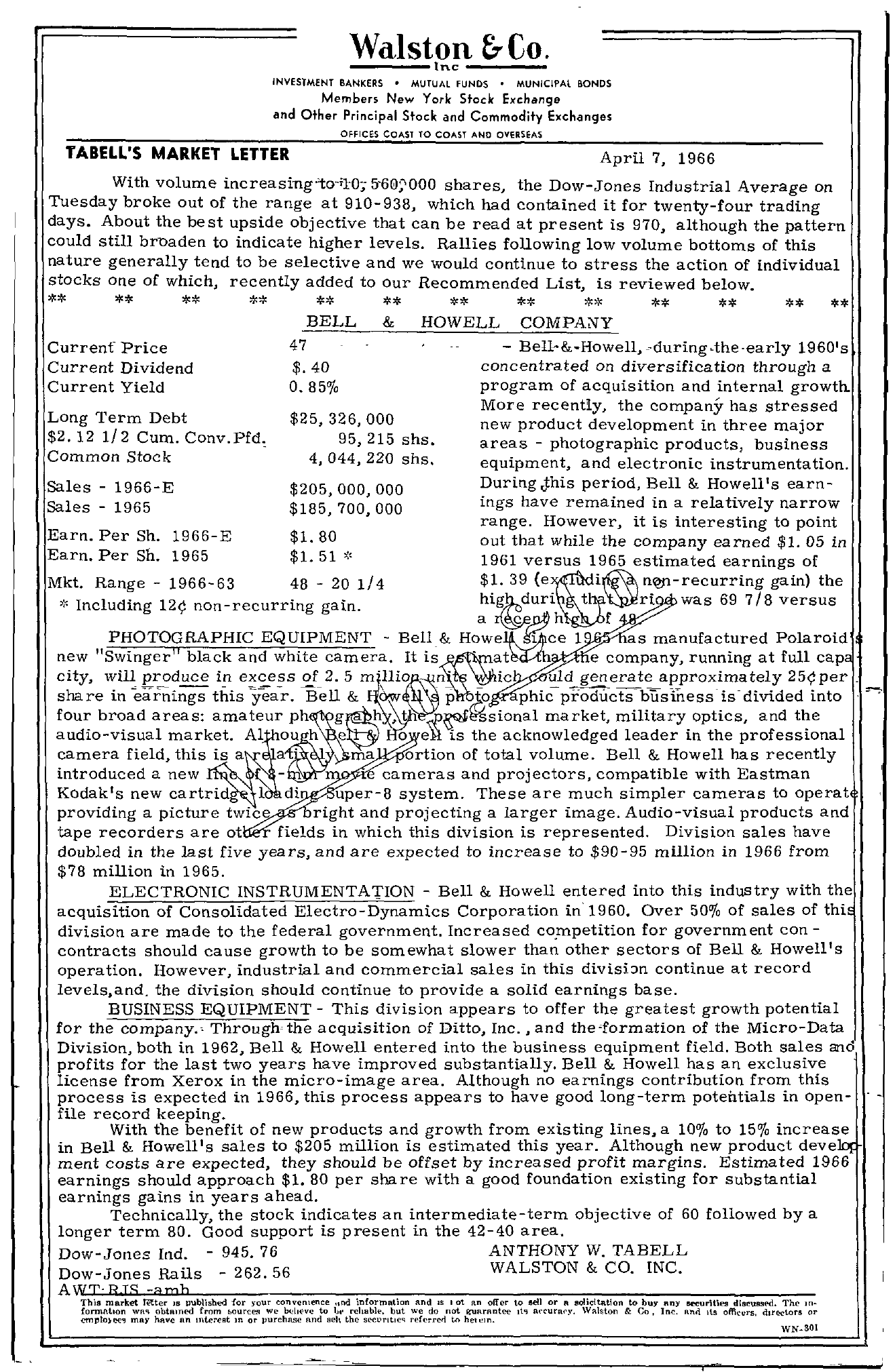 W—-a–l-s-tIoncn–&–C–o–. INVESlMENT BANKERS MUTUAL FUNDS MUNICIPAl BONDS Members New York Stock Exchange and Other Principal Stock and Commodity Exchanges OFfiCES COAST TO COAST AND OVERSEAS TABELL'S MARKET LETTER April 7, 1966 With volume increasing'to'iJO; 5'6;'OOO shares, the Dow-Jones Industrial Average on Tuesday broke out of the range at 910-938, which had contained it for twenty-four trading days. About the best upside objective that can be read at present is 970, although the pattern could still brtaden to indicate higher levels. Rallies following low volume bottoms of this nature generally tend to be selective and we would continue to stress the action of individual stocks one of which, recently added to our Recommended List, is reviewed below. BELL & HOWELL COMPANY Currenf Price Current Dividend Current Yield Long Term Debt 2.121/2 Cum. Conv.Pfd. Common Stock 47 .40 0.85 25,326,000 95,215 shs. 4, 044, 220 shs. – -,during.the-early 1960's concentrated on diversification through a program of acquisition and internal growth. More recently, the company has stressed new product development in three major areas – photographic products, business equipment, and electronic instrumentation. Sales – 1966-E Sales – 1965 Earn. Per Sh. 1966-E Earn. Per Sh. 1965 205,000,000 185,700,000 1. 80 1. 51 1. During Jhis period, Bell & Howell's earnings have remained in a relatively narrow range. However, it is interesting to pOint out that while the company earned 1. 05 in 1961 versus 1965 estimated earnings of Mkt. Range – 1966- 63 48 – 20 1/4 Including 12 non-recurring gain. PHOTOGRAPHIC EQUIPMENT – Bell & new Swinger black and white camera. It 1. 39 hig,lh,duri nl!fl-recurring gain) the t t'tW!ri was 69 7/8 versus f 1 as manufactured Polaroid e company, running at full cap city, i!l. of 2. 5 share 10 earmngs th1S year. Bell & OW four broad areas amateur ph g h, t ic . ''.ld generate P ph1C products busmess 1S dtVlded lOtO . – market, military optics, and the camera field, this is a a' rna ortion of total volume. Bell & Howell has recently introduced a new – e cameras and projectors, compatible with Eastman Kodak's new cartrid I di uper-8 system. These are much simpler cameras to operat providing a picture twice right and projecting a larger image. Audio-visual products and tape recorders are ot fields in which this division is represented. Division sales have doubled in the last five years, and are expected to increase to 90-95 million in 1966 from 78 million in 1965. ELECTRONIC INSTRUMENTATION – Bell & Howell entered into this industry with the acquisition of Consolidated Electro-Dynamics Corporation in'1960. Over 50 of sales of thi division are made to the federal government. Increased co.mpetition for government con- contracts should cause growth to be somewhat slower than other sectors of Bell & Howell's operation. However, industrial and commercial sales in this divisim continue at record levels,and. the division should continue to provide a solid earnings base. BUSINESS EQUIPMENT – This division appears to offer the greatest growth potential for the company. – Through, the acquisition of Ditto, Inc. ,and the -formation of the Micro-Data Division, both in 1962, Bell & Howell entered into the business equipment field. Both sales and profits for the last two years have improved substantially. Bell & Howell has an exclusive license from Xerox in the micrO-image area. Although no earnings contribution from this process is expected in 1966, this process appears to have good long-term potentials in open- file record keeping. With the benefit of new products and growth from existing lines, a 10 to 15 increase in Bell & Howell's sales to 205 million is estimated this year. Although new product deve ment costs are expected, they should be offset by increased profit margins. Estimated 1966 earnings should approach 1. 80 per share with a good foundation existing for substantial earnings gains in years ahead. Technically, the stock indicates an intermediate-term objective of 60 followed by a longer term 80. Good support is present in the 42-40 area. Dow-Jones Ind. – 945. 76 ANTHONY W. TABELL Dow-Jones Rails – 262.56 WALSTON & CO. INC. AWT'RIS -amb This mllTket Tetter IS published for your convenience TId information and IS lot an offer to sell or R solicltatlon to buy Rny lIt'Curities dlseussro. The In fonnntion wn… obtRmed from we to Lt' but we do not gunrflntee Ito; a(eurR(Y. Wl'Illiton & Co. Inc. find Ils officers. dlr(;Ctonl or cmI'lo)l.!eo; mny have an mterest In or purchase Rnd sell the SeCl'rltIC'I refcrrcrl. U. helt!ln. WN301 '