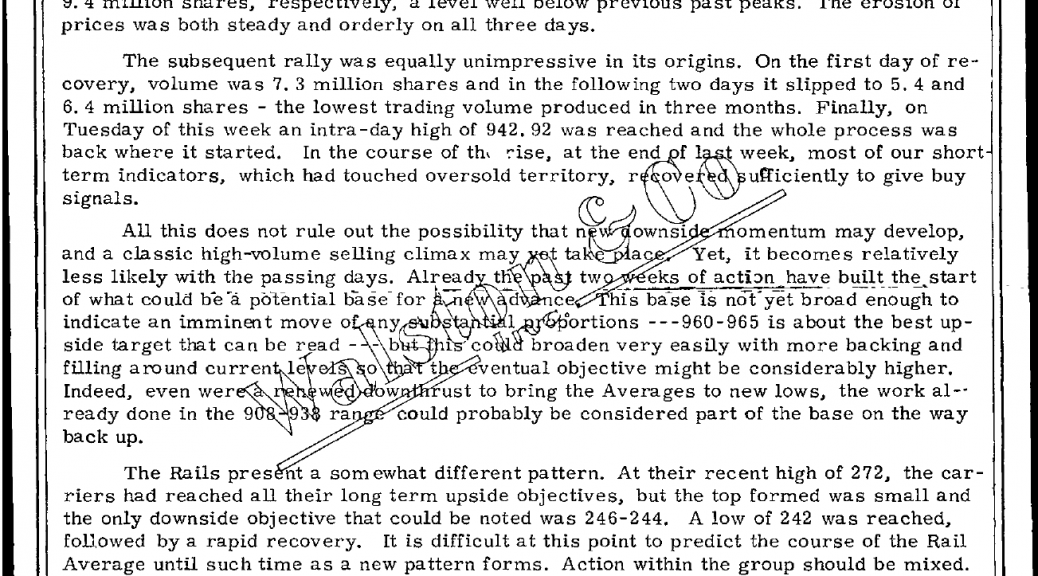 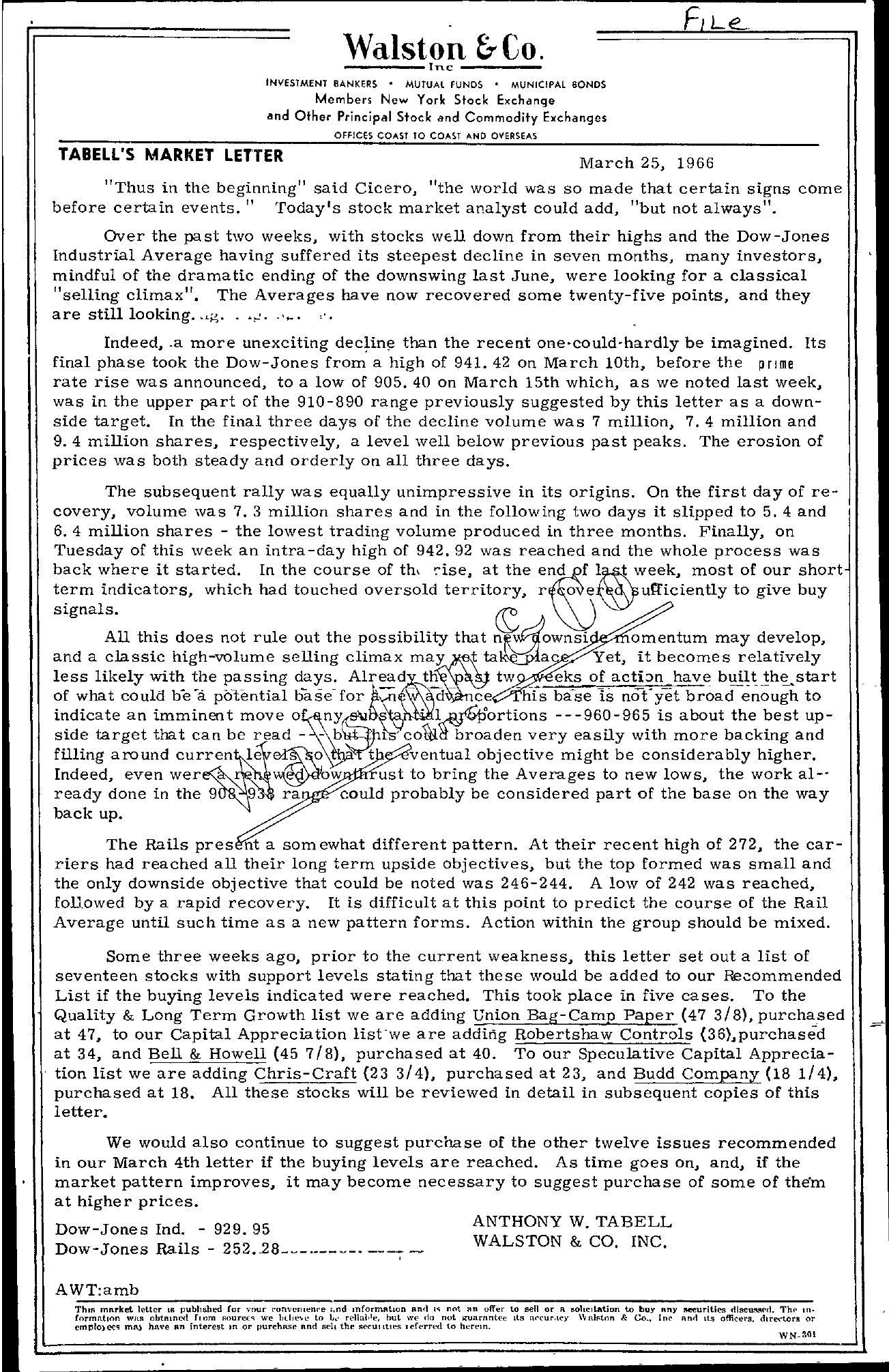 'Vdlston &Co. —–Inc —-INVESTMENT BANKERS 4 MUTUAL fUNDS MUNICIPAL 80NDS Members New York Stock Exchange and Other Principal Stock and Commodity Exchanges F L …- OFflCES COAST TO COAST AND OVERSEAS TABEll'S MARKET lETTER March 25, 1966 Thus in the beginning said Cicero, the world was so made that certain signs come before certain events. Today's stock market analyst could add, but not always. Over the past two weeks, with stocks wEll down from their highs and the Dow-Jones Industrial Average having suffered its steepest decline in seven months, many investors, mindful of the dramatic ending of the downswing last June, were looking for a classical selling climax. The Averages have now recovered some twenty-five points, and they are still looking..cg. . .,.!. Indeed, .a more unexciting decline than the recent onecouldhardly be imagined. Its final phase took the Dow-Jones from a high of 941. 42 on March lOth, before the prime rate rise was announced, to a low of 905.40 on March 15th which, as we noted last week, was in the upper part of the 910-S90 range previously suggested by this letter as a downside target. In the final three days of the decline volume was 7 million, 7.4 million and 9.4 million shares, respectively, a level well below previous past peaks. The erosion of prices was both steady and orderly on all three days. The subsequent rally was equally unimpressive in its ongms. On the first day of re- covery, volume was 7.3 million shares and in the following two days it slipped to 5.4 and 6.4 million shares – the lowest trading volume produced in three months. Finally, on Tuesday of this week an intra-day high of 942.92 was reached and the whole process was back where it started. In the course of th, eise, at the week, most of our short term indicators, which had touched oversold territory, r 0 eWufficiently to give buy signals. All this does not rule out the possibility that omentum may develop, and a classic high-volume selling climax Yet, it becomes relatively less likely passi.ng days. of what could be a potential base for tw – eks d ce h1S base 1S not yet broad enough to indicate an imminent move . —960-965 is about the best up- side target that can be read – – b filling around Ie eJ\0 t very easily with more backing and ventual objective might be considerably higher. Indeed, even wer ust to bring the Averages to new lows, the work al-' ready done in the 9 9 ra could probably be considered part of the base on the way back up. The Rails pres nt a somewhat different pattern. At their recent high of 272, the carriers had reached all their long term upside objectives, but the top formed was small and the only downside objective that could be noted was 246-244. A low of 242 was reached, followed by a rapid recovery. It is difficult at this point to predict the course of the Rail Average until such time as a new pattern forms. Action within the group should be mixed. Some three weeks ago, prior to the current weakness, this letter set out a list of seventeen stocks with support levels stating that these would be added to our Re;ommended List if the buying levels indicated were reached. This took place in five cases. To the Quality & Long Term Growth list we are adding Union Bag-Camp Paper (47 3/S), purchased at 47, to our Capital Appreciation list-we are adding Robertshaw Controls (36),purchased at 34, and Bell & Howell 45 7/S, purchased at 40. To our Speculative Capital Appreciation list we are adding Chris-Craft 23 3/4, purchased at 23, and Budd Company (IS 1/4), purchased at IS. All these stocks will be reviewed in detail in subsequent copies of this letter. We would also continue to suggest purchase of the other twelve issues recommended in our March 4th letter if the buying levels are reached. As time goes on, and, if the market pattern improves, it may become necessary to suggest purchase of some of them at higher prices. Dow-Jones Ind. – 929.95 Dow-Jones Rails – . . ANTHONY W. TABELL WALSTON & CO. INC. AWTamb ThIll market letter Iii pubhshed (or your I'on\'cmcnl'e .nd mformAtlOn Rnll not lin offer to sell or 1\ sohcltation to buy RflY lM!oI'!urities dlscu.'I,!I('(L Th(' )1\. (ormntlon WIlS obtained f!lm !lOUfl! we to 1., relial,le. but we do not lnIarlmtee Its L\cur,lcy \\-nll'otnn & Go., IIII' nnl Its officers. dlred,ors or emI'loC(''1 mll.) have an interest In or purchru;e and sell the SecUI Ltles lefel'red to hercin. WN301