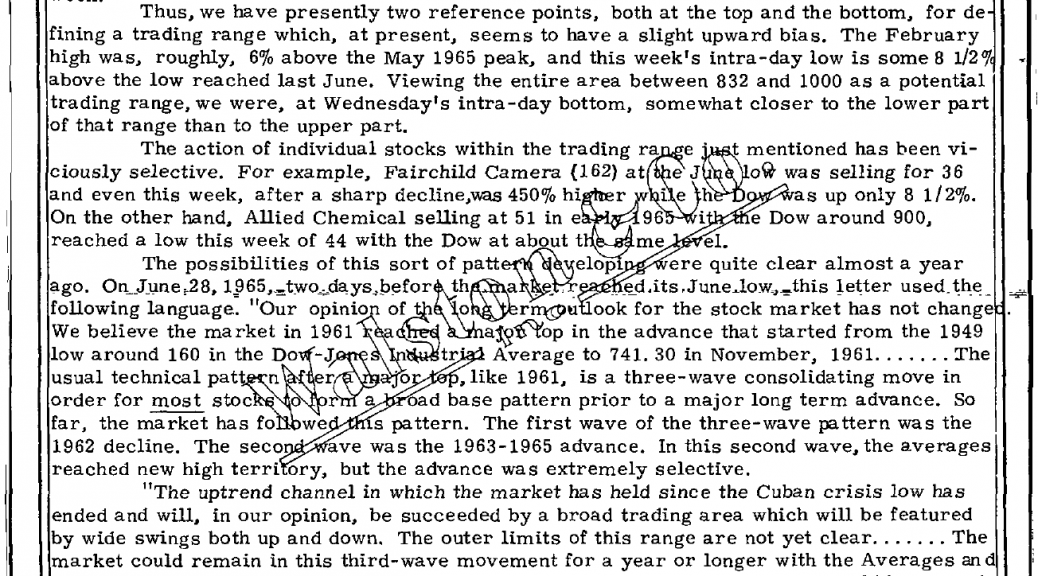 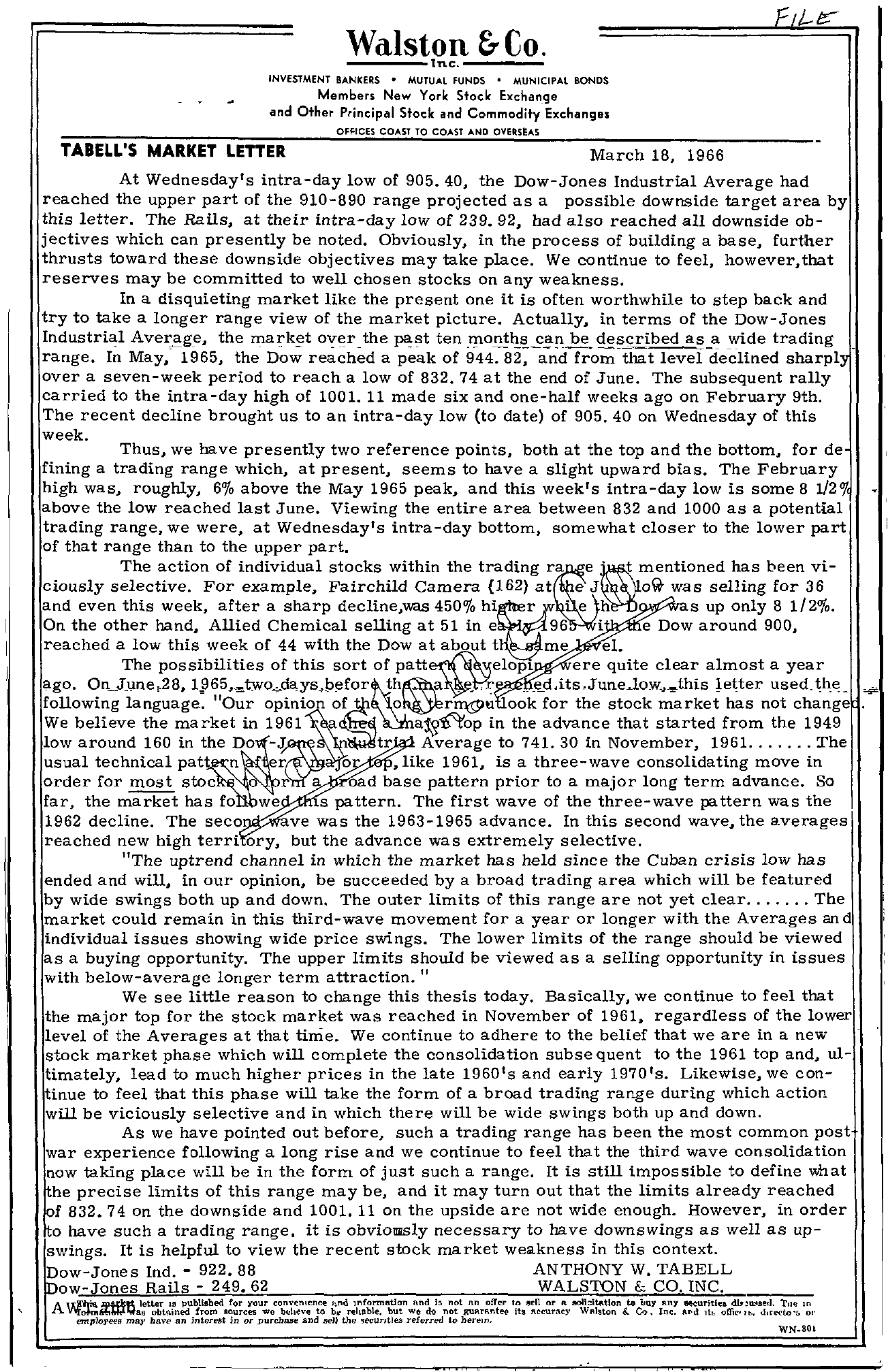 W—–a–l-s-tIoncn.–&—Co. INVESTMENT BANKERS MUTUAL FUNDS MUNICIPAL BONDS Members New York Stock Exchan.ge and Other Principal Stock and Commodity Exchange. TABEll'S MARKET lETTER OFFICES COAST TO COAST AND oVErtsbs March 18, 1966 At Wednesday's intra-day low of 905.40, the Dow-Jones Industrial Average had reached the upper part of the 910-890 range projected as a possible downside target area by this letter. The Rails, at their intra-day low of 239. 92, had also reached all downside ob- jectives which can presently be noted. Obviously, in the process of building a base, further thrusts toward these downside objectives may take place. We continue to feel, however, that reserves may be committed to well chosen stocks on any weakness. In a disquieting market like the present one it is often worthwhile to step back and try to take a longer range view of the market picture. Actually, in terms of the Dow-Jones Industrial Average, the market over the past ten months can be described as a wide trading range. In the a peak of from that level declined sharpl over a seven-week period to reach a low of 832. 74 at the end of June. The subsequent rally carried to the intra-day high of 1001. 11 made six and one-half weeks ago on February 9th. The recent decline brought us to an intra-day low (to date) of 905.40 on Wednesday of this week. Thus, we have presently two reference points, both at the top and the bottom, for de fining a trading range which, at present, seems to have a slight upward bias. The February high was, roughly, 60/0 above the May 1965 peak, and this week's intra-day low is some 8 1/20/. above the low reached last June. Viewing the entire area between 832 and 1000 as a potential trading range, we were, at Wednesday's intra-day bottom, somewhat closer to the lower part of that range than to the upper part. The action of individual stocks within the trading t mentioned has been vi- ciously selective. For example, Fairchild Camera (162) at e J was selling for 36 and even this week, after a sharp decline,w.lS 4500/0 )f i e Ii as up only 8 1/20/0. On the other hand, Allied Chemical selling at 51 in i e Dow around 900, reached a low this week of 44 with the Dow at about tyme el. The possibilities of this sort of ago. On.J.une,28, ere quite clear almost a year Jetter used.the. following language. Our opinion ook for the stock market has not change We believe the market in in the advance that started from the 1949 low around 160 in the Do tr' Average to 741. 30 in November, 1961. …… The usual technical patt n er '0 ,like 1961, is a three-wave consolidating move in order for most stoc a r a oad base pattern prior to a major long term advance. So far, the market has fo we s pattern. The first wave of the three-wave pattern was the 1962 decline. The seco ave was the 1963-1965 advance. In this second wave, the averages reached new high terri ory, but the advance was extremely selective. The uptrend channel in which the market has held since the Cuban crisis low has ended and will, in our opinion, be succeeded by a broad trading area which will be featured by wide swings both up and down. The outer limits of this range are not yet clear……. The market could remain in this third-wave movement for a year or longer with the Averages and individual issues showing wide price swings. The lower limits of the range should be viewed as a buying opportunity. The upper limits should be viewed as a selling opportunity in issues with below-average longer term attraction. We see little reason to change this thesis today. Basically, we continue to feel that the major top for the stock market was reached in November of 1961, regardless of the lower level of the Averages at that time. We continue to adhere to the belief that we are in a new stock market phase which will complete the consolidation subse quent to the 1961 top and, ul- timately, lead to much higher prices in the late 1960's and early 1970's. Likewise, we con- inue to feel that this phase will take the form of a broad trading range during which action will be viciously selective and in which there will be wide swings both up and down. As we have pointed out before, such a trading range has been the most common post war experience following a long rise and we continue to feel that the third wave consolidation now taking place will be in the form of just such a range. It is still impossible to define v.hat he precise limits of this range may be, and it may turn out that the limits already reached f 832.74 on the downside and 1001. 11 on the upside are not wide enough. However, in order o have such a trading range. it is obviolmSly necessary to have downswings as well as up- swings. It is helpful to view the recent stock market weakness in this context. Dow-Jones Ind. – 922.88 ow-Jones Rails – 249.62 ANTHONY W. TABELL WALSTON & CO. INC. A trK'irbl.IPadttt letter 18 published for your convemence !Ind Information and Is not an offer to edl or a solicitation to lIOY lI-llY Meurlttell Tile Hl obt!\ined from sources we boAleve to b, reliable. but we do not gURrflntee Its IU'curncy Wft.h!ton &. 0. Inc, llf'd lh officI n .-1,re'to'r, 01' eml110yees may have an jnterest jn 01' purchase and seU the ecuT/tles referred to herein. WN801