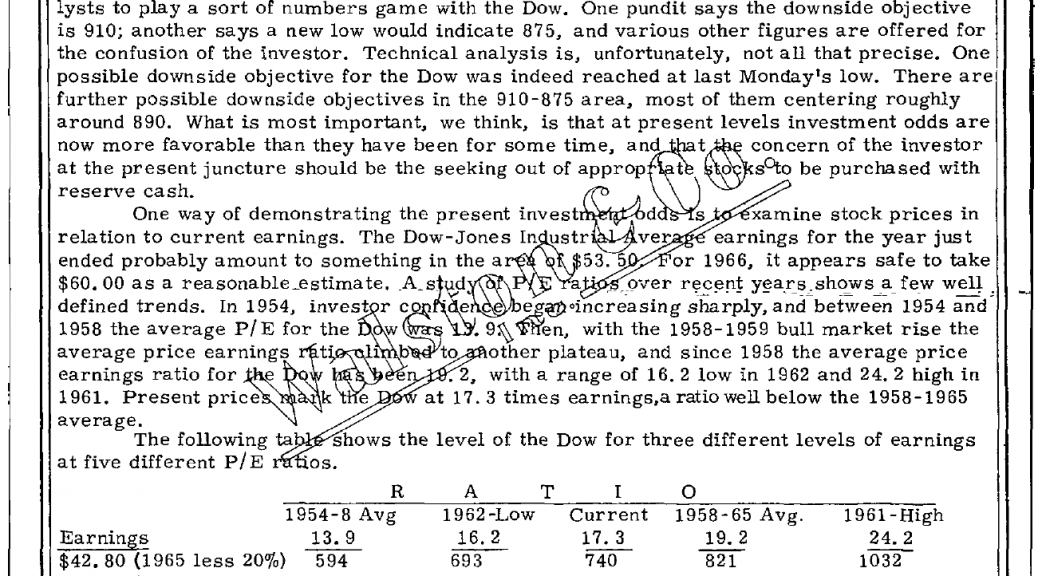 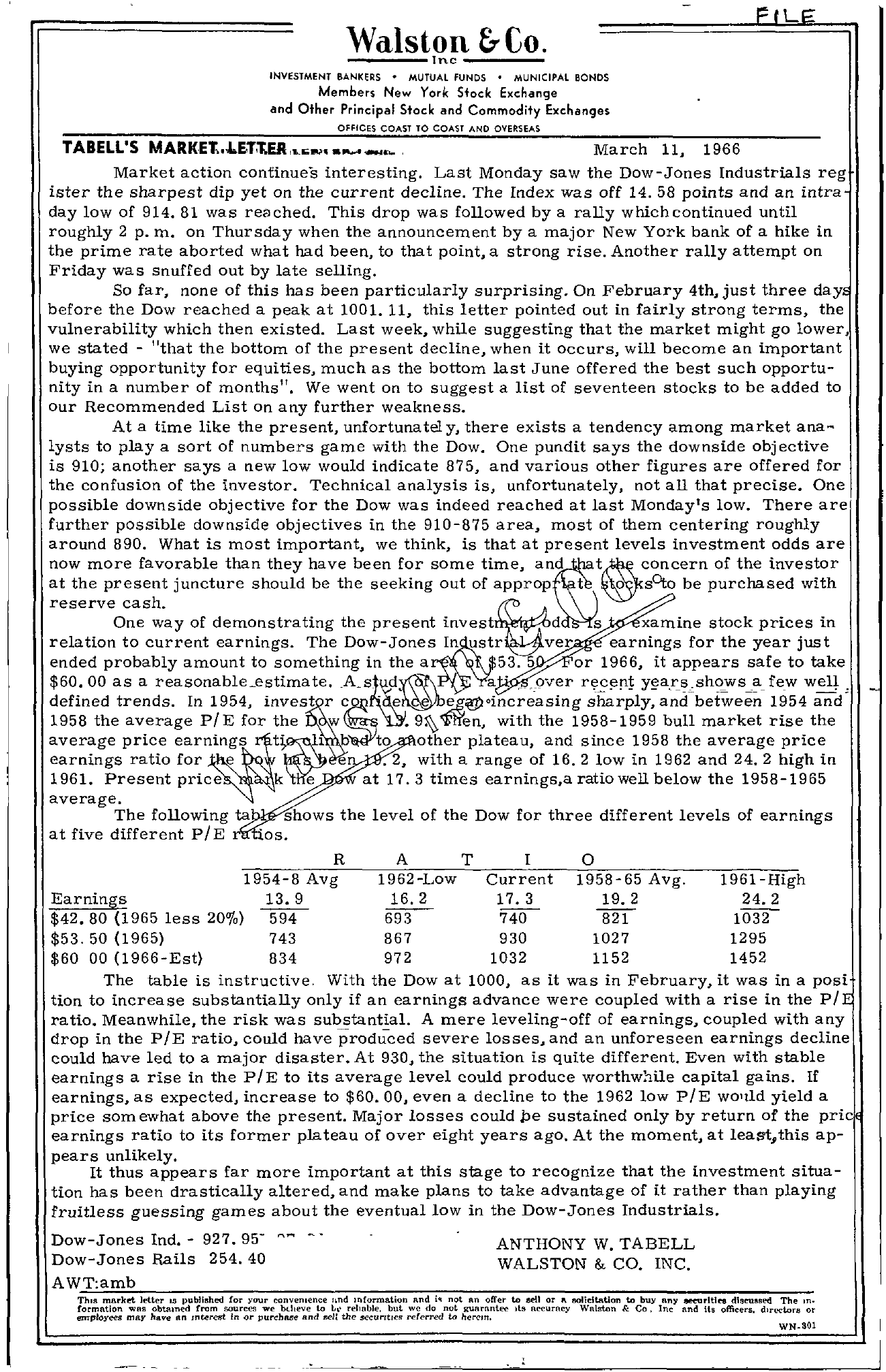 Walston &- Co. —-Inc INVESTMENT BANKERS MUTUAL FUNDS MUNICIPAL BONDS Members New York Stock Exchange and Other Principal Stock and Commodity Exchanges OFFICES COAST TO COAST AND OVERSEAS TABELL'S March 11, 1966 Market action continues interesting. Last Monday saw the Dow-Jones Industrials reg ister the sharpest dip yet on the current decline. The Index was off 14.58 points and an intra day low of 914.81 was reached. This drop was followed by a rally which continued until roughly 2 p. m. on Thursday when the announcement by a major New York bank of a hike in the prime rate aborted what had been, to that point, a strong rise. Another rally attempt on Friday was snuffed out by late selling. So far, none of this has been particularly surprising. On February 4th, just three day before the Dow reached a peak at 1001. 11, this letter pOinted out in fairly strong terms, the vulnerability which then existed. Last week, while suggesting that the market might go lower, we stated – that the bottom of the present decline, when it occurs, will become an important buying opportunity for equities, much as the bottom last June offered the best such opportunity in a number of months. We went on to suggest a list of seventeen stocks to be added to our Recommended List on any further weakness. At a time like the present, unfortunately, there exists a tendency among market analysts to playa sort of numbers game with the Dow. One pundit says the downside objective is 910; another says a new low would indicate 875, and various other figures are offered for the confusion of the investor. Technical analysis is, unfortunately, not all that precise. One possible downside objective for the Dow was indeed reached at last Monday's low. There are further possible downside objectives in the 910-875 area, most of them centering roughly around 890. What is most important, we think, is that at present levels investment odds are now more favorable than they have been for some time, at the present juncture should be the seeking out of approp t concern of the investor be purchased with reserve cash. One way of demonstrating the present invest d s xamine stock prices in relation to current earnings. The ustr ver earnings for the year just ended probably amount to something in the a 53.5 or 1966, it appears safe to take 60.00 as a defined trends. In 1954, 1958 the average pIE for the cS' w a . ..over well-, sharply, and between 1954 and 9l\,'1'i'en, with the 1958-1959 bull market rise the average price earnings ratio for e 1961. Present price average. The following ta at five different pIE b to other plateau, and since 1958 the average price e . 2, with a range of 16.2 low in 1962 and 24.2 high in ke at 17.3 times earnings,a ratio well below the 1958-1965 shows the level of the Dow for three different levels of earnings RA T I0 1954-8 Avg 1962-Low Current 1958-65 Avg. 1961-High Earnings 13.9 16.2 17. 3 19.2 24.2 42.80 (1965 less 20')'0) 594 693 740 821 1032 53.50 (1965) 743 867 930 1027 1295 60 00 (1966-Est) 834 972 1032 1152 1452 The table is instructive. With the Dow at 1000, as it was in February, it was in a posi tion to increase substantially only if an earnings advance were coupled with a rise in the pI ratio. Meanwhile, the risk was substantial. A mere leveling-off of earnings, coupled with any drop in the pIE ratio, could have produced severe losses, and an unforeseen earnings decline could have led to a major disaster. At 930, the situation is quite different. Even with stable earnings a rise in the pIE to its average level could produce worthw!1ile capital gains. If earnings, as expected, increase to 60.00, even a decline to the 1962 low pIE w011ld yield a price som ewhat above the present. Major losses could pe sustained only by return of the pric earnings ratio to its former plateau of over eight years ago. At the moment, at least,this ap- pears unlikely. It thus appears far more important at this stage to recognize that the investment situa- tion has been drastically altered, and make plans to take advantage of it rather than playing fruitless guessing games about the eventual low in the Dow-Jones Industrials. Dow-Jones Ind. – 927.95Dow-Jones Rails 254.40 ANTHONY W. TABELL WALSTON & CO. INC. AWTamb ThiS markl!t letter IS publillhed for your convenaence lInd Infonnation Rnd i'l not an offer to 811'l.1 or 1\ &OIicltation to buy any eeeurities dlseullsed The information was obtained from sources we blheve to L.., rellable, but we do not gUarantee Its accuracy Walston & Co, Inc and its officers, dlrl.'('tor8 or employees may have an Jnterffi in or pur-ehRBE.' and sell the securities referred to her,,