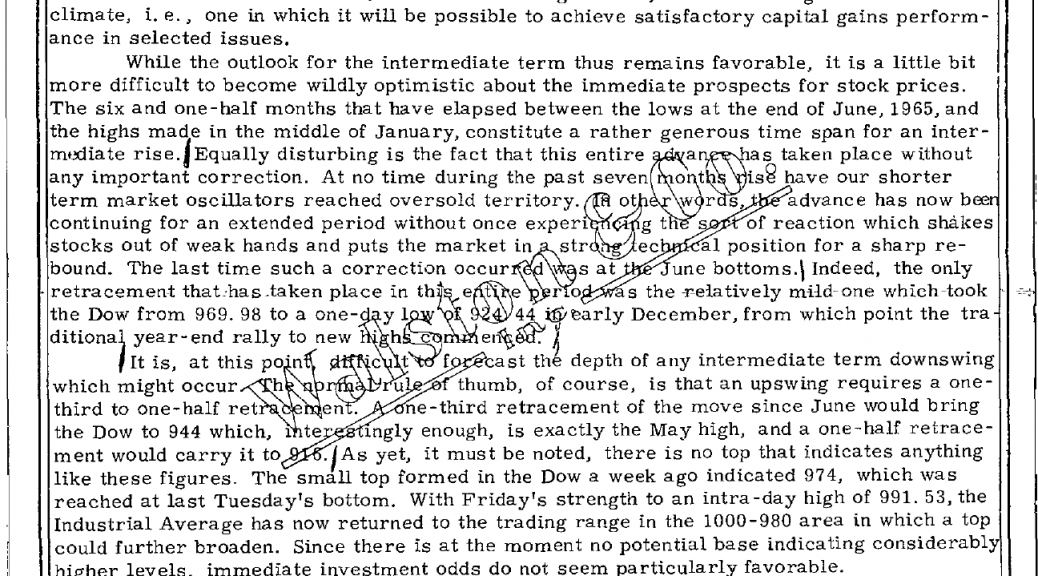 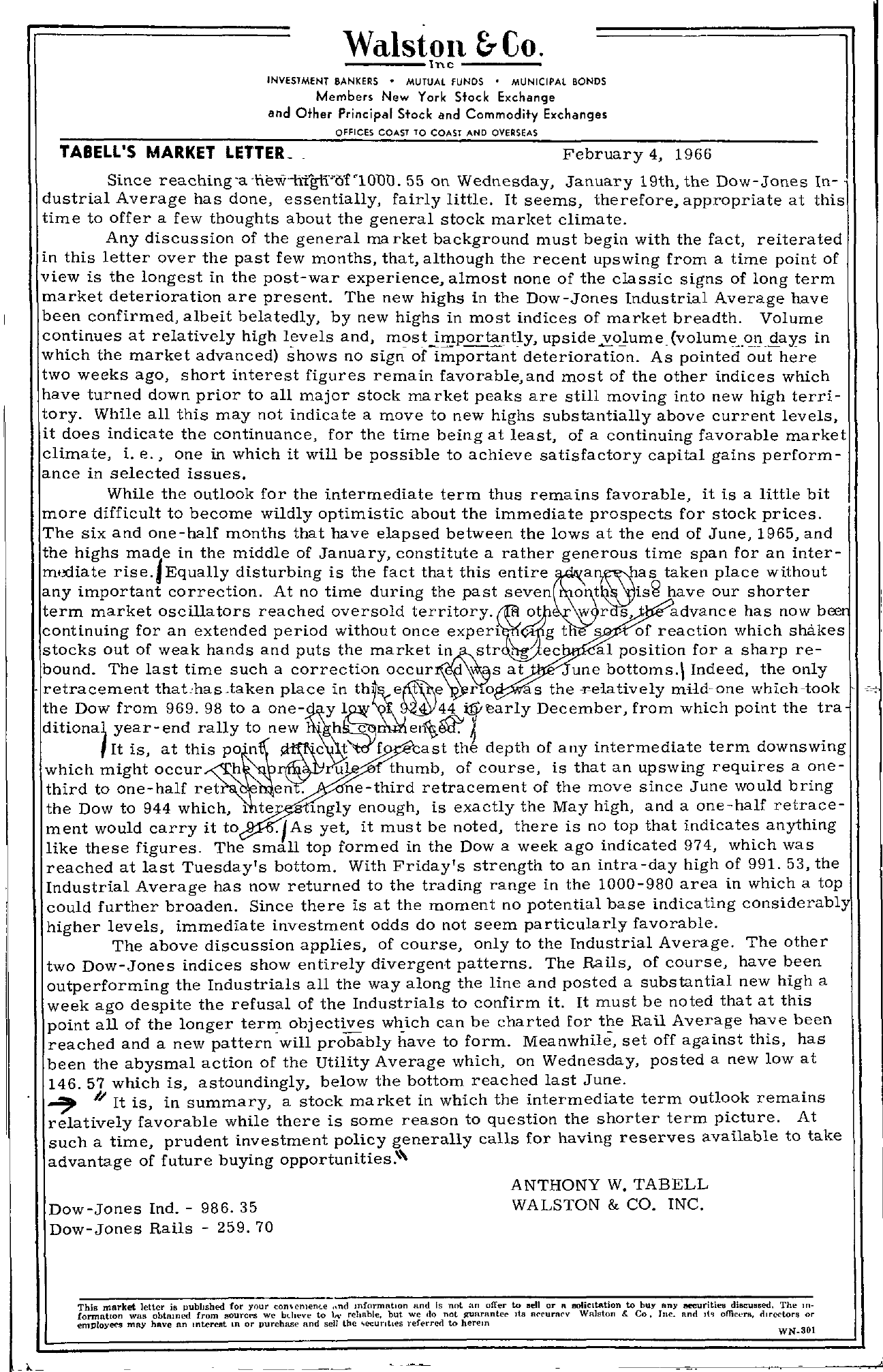 TABELL'S MARKET Walston &- Co. —–\nc —– INVESTMENT BANKERS MUTUAL FUNDS MUNICIPAL BONDS Members New York Stock Exchange and Other Principal Stock and Commodity Exchanges OFFICES COAST TO COAST AND OVER.SEAS LETTER February 4, 1966 Since reaching-a -new-iiign'Oi C10DD. 55 on Wednesday, January 19th, the Dow-Jones In- dustrial Average has done, essentially, fairly little. It seems, therefore, appropriate at this time to offer a few thoughts about the general stock market climate. Any discussion of the general market background must begin with the fact, reiterated in this letter over the past few months, that, although the recent upswing from a time point of view is the longest in the post-war experience, almost none of the classic signs of long term market deterioration are present. The new highs in the Dow-Jones Industrial Average have been confirmed, albeit belatedly, by new highs in most indices of market breadth. Volume continues at relatively high levels and, mostJmportantly, in which the market advanced) shows no sign of important deterioration. As pointed out here two weeks ago, short interest figures remain favorable, and most of the other indices which have turned down prior to all major stock rna rket peaks are still moving into new high terri- tory. While all this may not indicate a move to new highs substantially above current levels, it does indicate the continuance, for the time being at least, of a continuing favorable market climate, i. e., one in which it will be possible to achieve satisfactory capital gains perform- ance in selected issues. While the outlook for the intermediate term thus remains favorable, it is a little bit more difficult to become wildly optimistic about the immediate prospects for stock prices. The six and one-half months that have elapsed between the lows at the end of June, 1965, and the highs made in the middle of January, constitute a rather generous time span for an inter- m,xiiate rise.IEqually disturbing is the fact that this entire taken place without any important correction. At no time during the past seven 0 t is'! have our shorter term market oscillators reached oversold territOrY'at w r s, advance has now bee continuing for an extended period without once expen g t s of reaction which shakes stocks out of weak hands and puts the market str ec al position for a sharp re- bound. The last time such a correction occur 's at une bottoms., Indeed, the only – retracemen-t that,hastaken place in r 0 as the -l'eiatively which-took the Dow from 969.98 to a December, from which point the tra ditiOnai year-end rally to new – h c er&f' It is, at t f cast the depth of any intermediate term downswlllg which might occur h r u thumb, of course, is that an upswing requires a one- third to one-half ret en . ne-third retracement of the move since June would bring ./Asthe Dow to 944 which, 1 te ment would carry it to mglyenough, is exactly the May high, and a one-half retrace- yet, it must be noted, there is to that anything like these figures The small top formed in the Dow a week ago mdlCated 974, WhICh was reached at last Tuesday's bottom. With Friday's strength to an intra-day high of 991. 53, the Industrial Average has now returned to the trading range in the 1000-980 area in which a top could further broaden. Since there is at the moment no potential base indicating considerably higher levels, immediate investment odds do not seem particularly favorable. The above discussion applies, of course, only to the Industrial Average. The other two Dow-Jones indices show entirely divergent patterns. The Rails, of course, have been outperforming the Industrials all the way along the line and posted a substantial new high a week ago despite the refusal of the Industrials to confirm it. It must be noted that at this point all of the longer term objectives wh,ich can be charted for Rail Average have been reached and a new pattern will probably have to form. Meanwhile, set off against this, has been the abysmal action of the Utility Average which, on Wednesday, posted a new low at 146. 57 which is, astoundingly, below the bottom reached last June. // It is, in summary, a stock market in which the term remains relatively favorable while there is some reason to questlOn the shorter term pIcture. At such a time, prudent investment policy generally calls for having reserves available to take advantage of future buying opportunities.\\ Dow-Jones Ind. – 986.35 Dow-Jones Rails – 259.70 ANTHONY W. TABELL WALSTON & CO. INC. This market letter is publlshed for your nd mfoTnlf'tlon Rnd Is not an offer to ReI! or soIieltation to huy An)' M'CUritlea discussed, The In- formatIon was obtfuned from sourCl' we bdn've to I,, rclmble, but we 110 not gUfirantce lis fI('rurarv Wnlston I. Co, JIIC. nnd offict'rs, dlrC('Wrs or employees mAY hAve an tntereat In or purchase and sell the referred to herem WN301