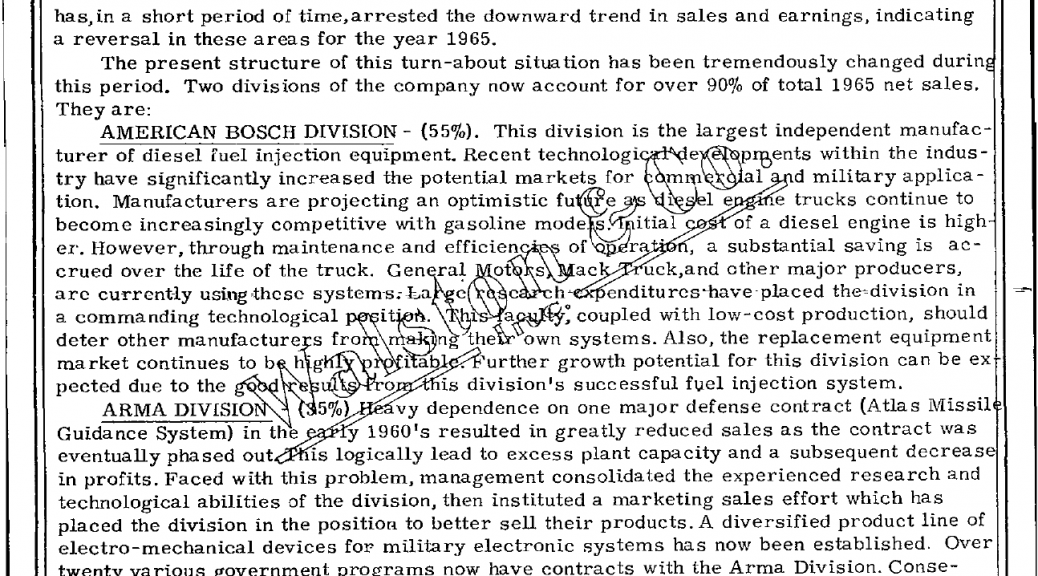 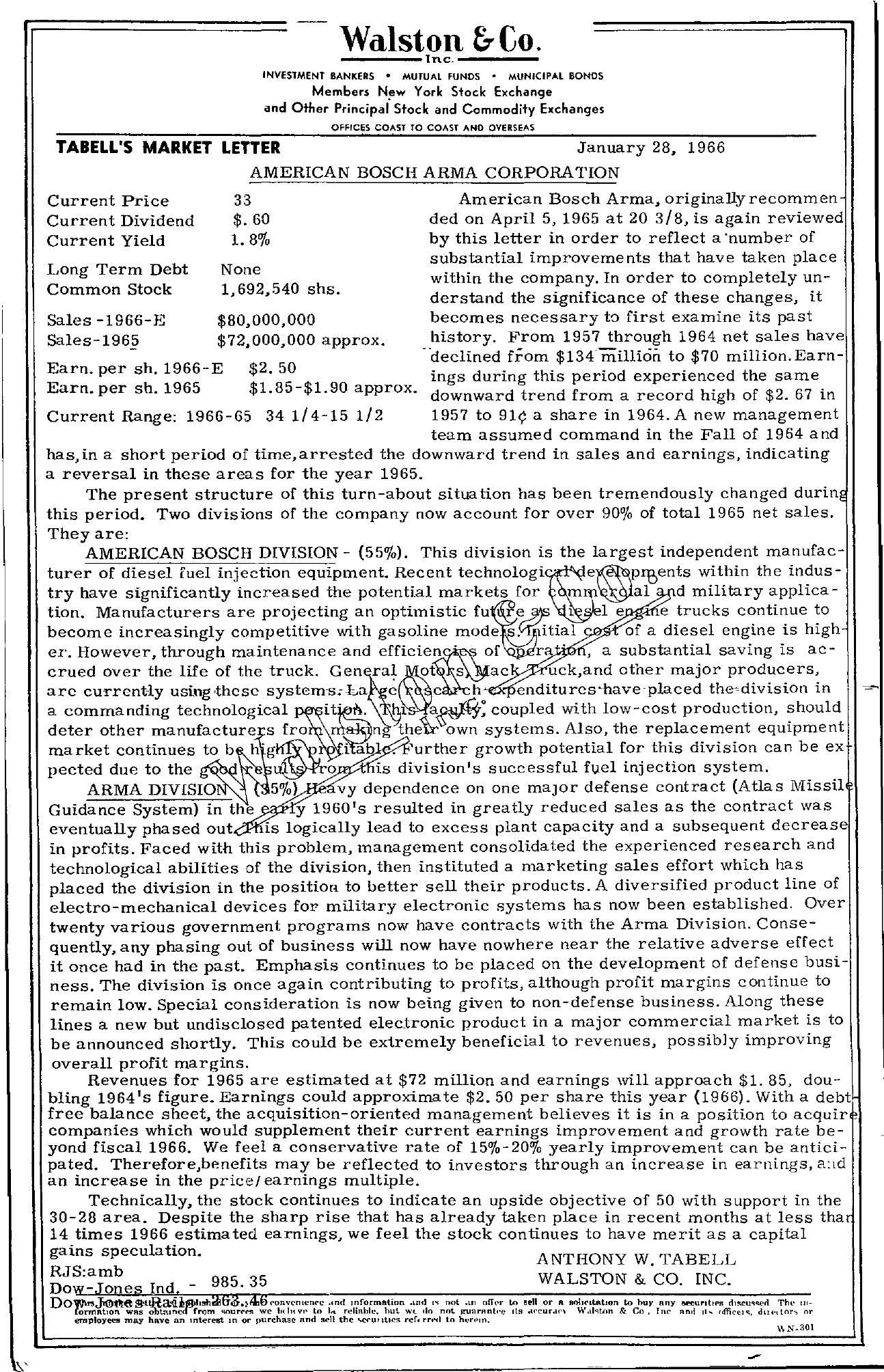 Walston &Co. —….;;….; Inc – …..- – INVESTMENT BANKERS MUTUAL FUNDS MUNICIPAL 60NnS Members N!'w York Stock Exchange and Other Principal Stock and Commodity Exchanges OFFICES COAST TO COAST AND OVERSEAS TABELL'S MARKET LETTER January 28, 1966 AMERICAN BOSCH ARMA CORPORATION Current Price Current Dividend Current Yield Long Term Debt Common Stock 33 . 60 1. 8 None 1,692,540 shs. American Bosch Arma, originallyrecommen ded on April 5, 1965 at 20 3/8, is again reviewed by this letter in order to reflect a 'number of substantial improvements that have taken place within the company. In order to completely understand the significance of these changes, it Sales -1966-E 80,000,000 becomes necessary to first examine its past Sales-1965 72,000,000 approx. history. From 1957 through 1964 net sales have Earn. per sh. 1966-E Earn. per sh. 1965 –declined from 134milliciil to 70 million.Earn- 2.50 ings during this period experienced the same 1.85-1.90 approx. downward trend from a record high of 2. 67 in Current Range 1966-65 341/4-151/2 1957 to 91 a share in 1964. A new management team assumed command in the Fall of 1964 and has, in a short period of time, arrested the downward trend in sales and earnings, indicating a reversal in these areas for the year 1965. The present structure of this turn-about situation has been tremendously changed durin this period. Two divisions of the company nOw account for over 90 of total 1965 net sales. They are AMERICAN BOSCH DIVISION – (55). This division is the largest independent manufac- turer of diesel fuel injection equipment. Recent within the indus- try have significantly increased the potential markets for mrnwal d military applica- tion. Manufacturers are projecting an optimistic 1 l e e trucks continue to become increasingly competitive with gasoline mode s.Gfi1itial of a diesel engine is high er. However, through maintenance and of ra, a substantial saving is ac- crued over the life of the truck. arc cu-rrent-Iy ustngthcsc system-s;-La s ac uck,and other major producers, c h' enditurcs-have-placed in a commanding technological is coupled with low-cost production, should deter other manufacture s fro n own systems. Also, the replacement equipment market continues to b i ab . 'urther growth potential for this division can be ex pected due to the is division's successful fuel injection system. ARMA DIVSIO 5) vy dependence on one major defense contract (Atlas Missil y 1960's resulted in greatly reduced sales as the contract was eventually phased out is logically lead to excess plant capacity and a subsequent decrease in profits. Faced with this problem, management consolidated the experienced research and technological abilities of the division, then instituted a marketing sales effort which has placed the division in the position. to better sell their products. A diversified product line of electro-mechanical devices for military electronic systems has now been established. Over twenty various government programs now have contracts with the Arma Division. Conse- quently, any phasing out of business will nOw have nowhere near the relative adverse effect it once had in the past. Emphasis continues to be placed on the development of defense busi- ness. The division is once again contributing to profits, although profit margins continue to remain low. Special consideration is now bei.ng given to non-defense business. Along these lines a new but undisclosed patented electronic product in a major commercial market is to be announced shortly. This could be extremely beneficial to revenues, possibly improving overall profit margins. Revenues for 1965 are estimated at 72 million and earnings will approach 1. 85, dou- bling 1964's figure. Earnings could approximate 2.50 per share this year (1966). With a debt free balance sheet, the acquisition-oriented management believes it is in a position to acquir companies which would supplement their current earnings improvement and growth rate beyond fiscal 1966. We feel a conservati.ve rate of 15-20 yearly improvement can be anticipated. Therefore,benefits may be reflected to investors through an increase in earnings,8.td an increase in the pricel earnings multiple. Technically, the stock continues to indicate an upside objective of 50 with support in the 30-28 area. Despite the sharp rise that has already taken place in recent months at less tha 14 times 1966 estimated earnings, we feel the stock continues to have merit as a capital ANTHONY W. TABELL Dow-Jones Ind. – 985.35 WALSTON & CO. INC. DOlJ'r,tSJi0tltft ('onVlntt.'nt'c ,end Information .uut I'! not .w ofT('r to eell or R Aohlltatlon to buy E1ny securltws 01lCU'lcwti Tnt' .11- tormatlOn Will 'IOur('('!l we tIv, to I…. rdinl,le. hut WI.. ,10 not guarRnte Its .,J.('cur.H'\ \V,II'Iton & Co. Inc anI! ,I … du .dor-, or emJ'lloyees may have an mterest In or purchase and sell the ,crulllleS ref. rn'(l to hO;'rt'!1l. \\ N301 .-