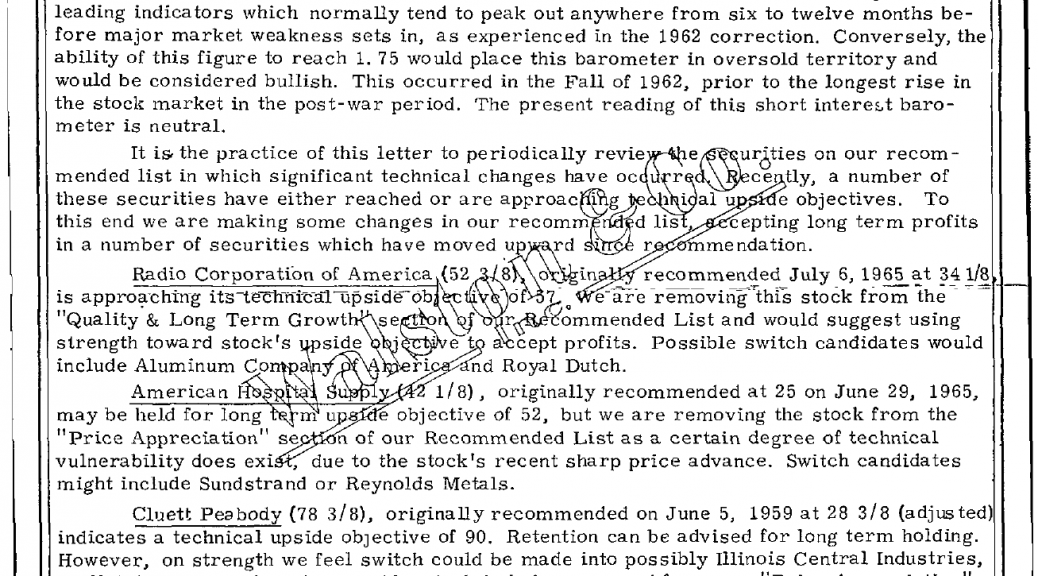 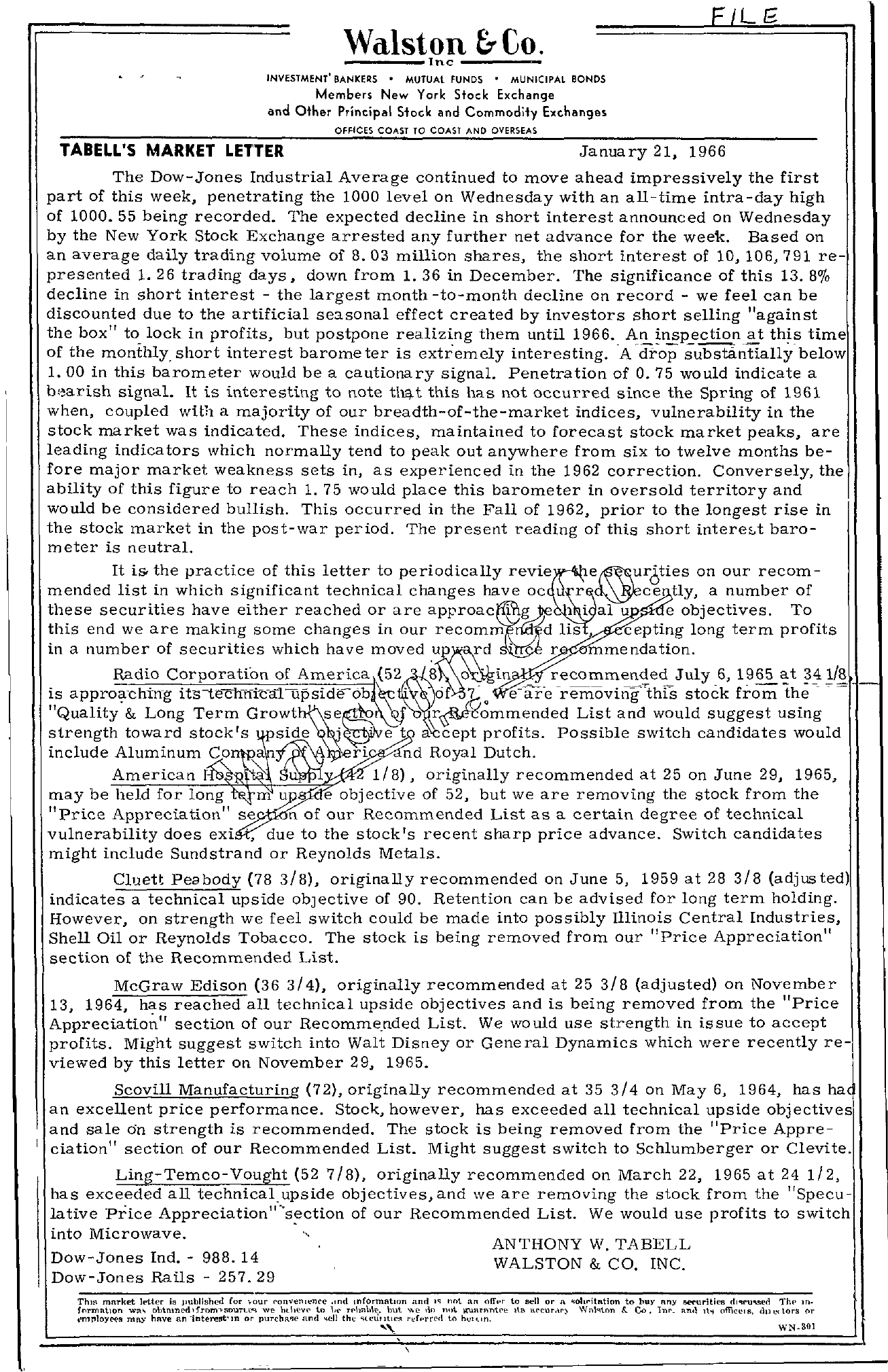 Walston &Co. —–Inc INVESTMENT' BANKERS MUTUAL FUNDS MUNICIPAL BONDS Members New York Stock Exchange and Other Principal Stock and Commodity Exchanges OFFICES COAST TO COAST AND OVERSEAS TABELL'S MARKET LETTER January 21, 1966 The Dow-Jones Industrial Average continued to move ahead impressively the first part of this week, penetrating the 1000 level on Wednesday with an all-time intra-day high of 1000.55 being recorded. The expected decline in short interest announced on Wednesday by the New York Stock Exchange arrested any further net advance for the week. Based on an average daily trading volume of 8. 03 million shares, the short interest of 10,106,791 represented 1. 26 trading days, down from 1. 36 in December. The significance of this 13. 8 decline in short interest – the largest month -to-month decline on record – we feel can be discounted due to the artificial seasonal effect created by investors short selling against the box to lock in profits, but postpone realizing them until 1966. An inspection at this time of the monthly, short interest barome ter is extremely interesting. A 'drop substantially below 1. 00 in this barometer would be a cautionary signal. Penetration of 0.75 would indicate a signal. It is interesting to note thll-t this has not occurred since the Spring of 1961 when, coupled with a majority of our breadth-of-the-market indices, vulnerability in the stock market was indicated. These indices, maintained to forecast stock market peaks, are leading indicators which normally tend to peak out anywhere from six to twelve months before major market weakness sets in, as experienced in the 1962 correction. Conversely, the ability of this figure to reach 1. 75 would place this barometer in oversold territory and would be considered bullish. This occurred in the Fall of 1962, prior to the longest rise in the stock market in the post-war period. The present reading of this short interest barometer is neutral. It is. the practice of this letter to periodically on our recom- mended list in which significant technical changes have oc r tly, a number of these securities have either reached or are 'tg J1e 1 i al u e objectives. To this end we are making some changes in our recomm lis cepting long term profits in a number of securities which have moved r mmendation. 'e;c4x'Radio Corporation of America is approa'chin'g its-technicllupside-ob o' in recommended July 6, 1965 at 341/8 o'-J;,o e-ar-e -removing-this stock fI'om the -, – ' Quality & Long Term QJ'd List and would suggest using strength toward stock's side t a cept profits. Possible switch candidates would include Aluminum Co a r s WAmerican ri nd Royal Dutch. 1/8), originally recommended at 25 on June 29, 1965, may be held for long m u e objective of 52, but we are removing the stock from the Price Appreciation se n of our Recommended List as a certain degree of technical vulnerability does exi , due to the stock's recent sharp price advance. Switch candidates might include Sundstrand or Reynolds Metals. Cluett Peabody (78 3/8), originally recommended on June 5, 1959 at 28 3/8 (adjusted) indicates a technical upside objective of 90. Retention can be advised for long term holding. However, on strength we feel switch could be made into possibly Illinois Central Industries, Shell Oil or ReynOlds Tobacco. The stock is being removed from our Price Appreciation section of the Recommended List. McGraw Edison (363/4), originally recommended at 25 3/8 (adjusted) on November 13, 1964, has reached all technical upside objectives and is being removed from the Price Appreciation section of our Recommended List. We would use strength in issue to accept profits. Might suggest switch into Walt Disney or Gene ral Dynamics which were recently reviewed by this letter on November 29, 1965. Scovill Manufacturing (72), originally recommended at 35 3/4 on May 6, 1964, has ha an excellent price performance. Stock, however, has exceeded all technical upside objectives and sale Cin strength is recommended. The stock is being removed from the Price AppreI ciation section of our Recommended List. Might suggest switch to Schlumberger or Clevite. Ling-Temco-Vought (52 7/8)' originally recommended on March 22, 1965 at 24 1/2, has exceeded all technical upside objectives, and we are removing the stock from the Specu- lative Price of our Recommended List. We would use profits to switch into Microwave. Dow-Jones Ind. – 988. 14 Dow-Jones Rails – 257.29 ANTHONY W. TABELL WALSTON & CO. INC. Thl mnTket letter ig JlUblishcn for I'OnVCllll'nCC .tnd InfOrmatIOn and nfit an olf..r to sell or ,fI, '1ohritRtlon to buy Any l!e('urities dl'lrU'Ised 'fht' m fnrmnt.lOn obt.mn.t\I'rom.!';(''UTu…. we l\lhv to but C ,if) nOlt j(UlIT1mtl'e ltS lI'(;ur.-\p) Wnhton F.. Co. Inp. nn.l1t'l officl'ls. dUl',tors or t'mf'!loYNs rnn)' hnve an or pUrchR'l ' and 'lell thl' '1ll'Ulltll'S rd.rred to h…ltlfl. …, WN301 ,