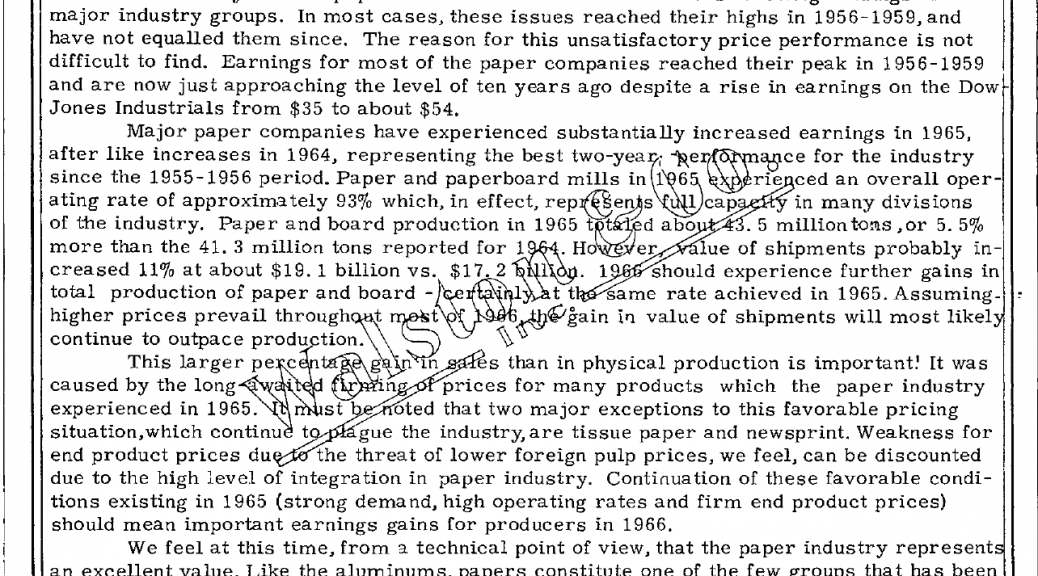 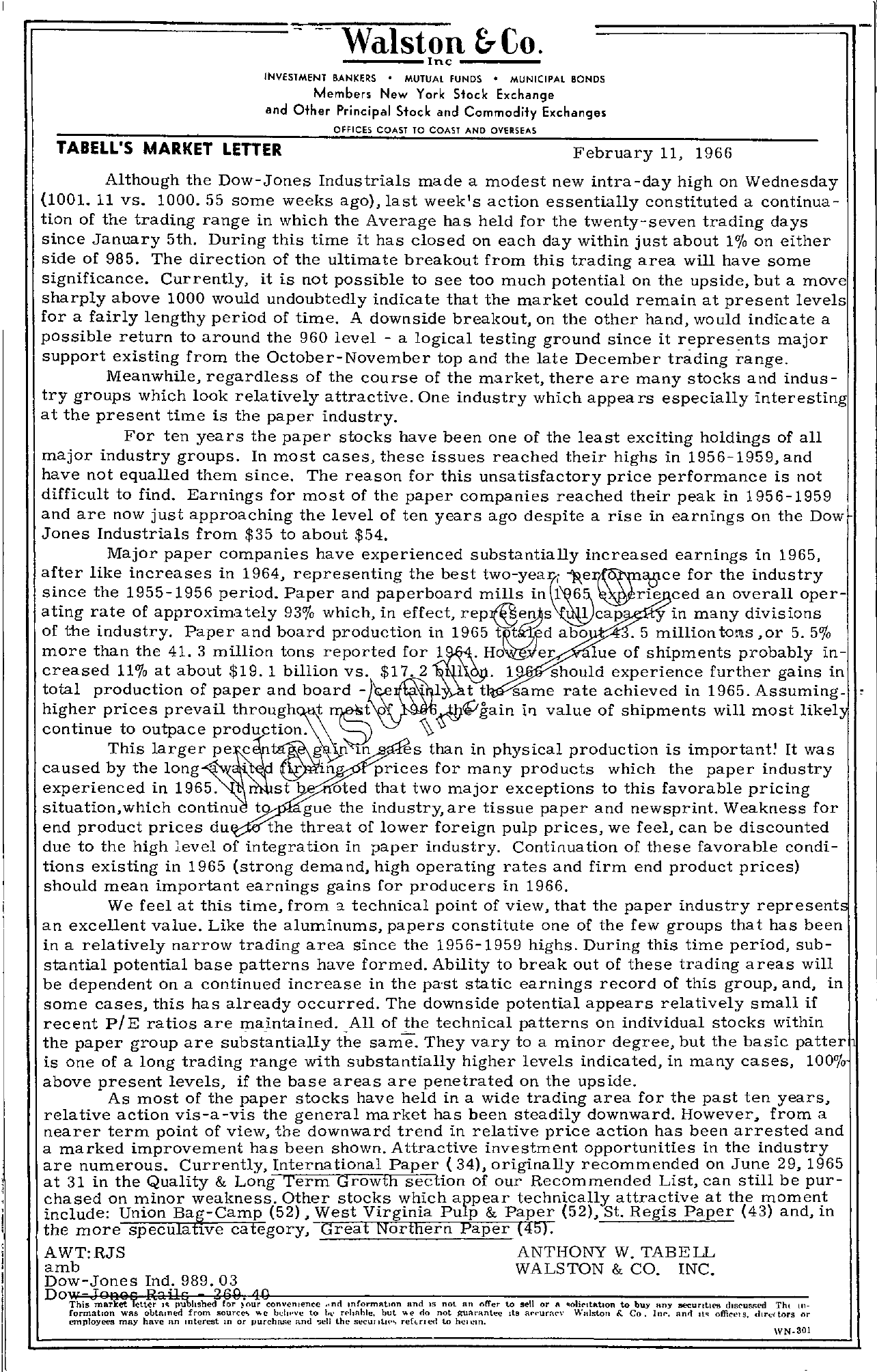 TABEll'S MARKET – Walston &- Co. —–Inc —– INVESTMENT BANKERS MUTUAL FUNDS MUNICIPAL BONDS Members New York Stock Exchange and Other Principal Stock and Commodity Exchanges lETTER OFfiCES COAST TO COAST AND OVERSEAS February 11, 1966 Although the Industrials made a modest new intra-day high on Wednesday (1001. 11 vs. 1000.55 some weeks ago), last week's action essentially constituted a continua- tion of the trading range in which the Average has held for the trading days since January 5th. During this time it has closed on each day within just about 1 on either side of 985. The direction of the ultimate breakout from this trading area will have some significance. Currently, it is not possible to see too much potential on the upside, but a move sharply above 1000 would undoubtedly indicate that the market could remain at present levels for a fairly lengthy period of time. A downside breakout, on the other hand, would indicate a possible return to around the 960 level a logical testing ground since it represents major support existing from the November top and the late December tra.ding range. Meanwhile, regardless of the course of the market, there are many stocks and indus- try groups which look relatively attractive. One industry which appears especially interesting at the present time is the paper industry. For ten years the paper stocks have been one of the least exciting holdings of all major industry groups. In most cases, these issues reached their highs in have not equalled them since. The reason for this unsatisfactory price performance is not difficult to find. Earnings for most of the paper companies reached their peak in and are now just approaching the level of ten years ago despite a rise in earnings on the Dow Jones Industrials from 35 to about 54. Major paper companies have experienced substantially increased earnings in 1965, after like increases in 1964, representing the best for the industry since the period. Paper and paperboard mills in 1 6 ced an overall ating rate of approximately 93 which, in effect, s I cap in many divisions of the industry. Paper and board production in 1965 t t d abo .5 million t-O1lS ,or 5.50/0 more than the 41. 3 million tons reported Ho er lue of shipments probably in- creased 11 at about 19.1 billion vs. 17.2 I . 1 should experience further gains in total production of paper and board t t same rate achieved in 1965. Assuming- higher prices prevail continue to outpace production. i'l value of shipments will most likel This c n n es than in physical production is important! It was caused by the long .I prices for many products which the paper industry experienced in 1965. st oted that two major exceptions to this favorable pricing situation,which continu t gue the industry,are tissue paper and newsprint. Weakness for end product prices du the threat of lower foreign pulp prices, we feel, can be discounted due to the high level of integration in paper industry. Continuation of these favorable tions existing in 1965 (strong demand, high operating rates and firm end product prices) should mean important earnings gains for producers in 1966. We feel at this time, from a technical pOint of view, that the paper industry represent an excellent value. Like the aluminums, papers constitute one of the few groups that has been in a relatively narrow trading area since the highs. During this time period, stantial potential base patterns have formed. Ability to break out of these trading areas will be dependent on a continued increase in the pa'st static earnings record of this group, and, in some cases, this has already occurred. The downside potential appears relatively small if recent pIE ratios are maintained. All of the technical patterns on individual stocks within the paper group are substantially the same. They vary to a minor degree, but the basic patter is one of a long trading range with substantially higher levels indicated, in many cases, 100 above present levels, if the base areas are penetrated on the upside. As most of the paper stocks have held in a wide trading area for the past ten years, relative action the general market has been steadily downward. However, from a nearer term point of view, the downward trend in relative price action has been arrested and a marked improvement has been shown. Attractive investment opportunities in the industry are numerous. Currently, International Paper (34), originally recommended on June 29,1965 at 31 in the Quality & Long Term Growth section of our Recommended List, can still be pur- chased on minor weakness. Other stocks which appear technically attractive at the momen.t include Union (52), West Virginia Pulp & Paper (52), St. Regis Paper (43) and, m the more speculatlVe category, Great Northern Paper (45). AWTRJS ANTHONY W. TABELL amb Dow-Jones Ind. 989.03 WALSTON & CO. INC. 211), 4Q This marketetter Ie; I,,hshed for lour convenIence nd InformatIOn and IS not lin olTer to sell or 1\ tolirltAtlOn to buy any secUrities dls('uued Th, In- formatIOn was obtmned from source, …. c bdwve to I., rf'hnille, but …. e tio not gunrnntee Its arrurr!rv WHiston &. Co. Inr. nnft office,s.hn.cwrs or ctnJlloyees may have nn Illterest III or and -;ell the reflorlcd to hClctn. WN301