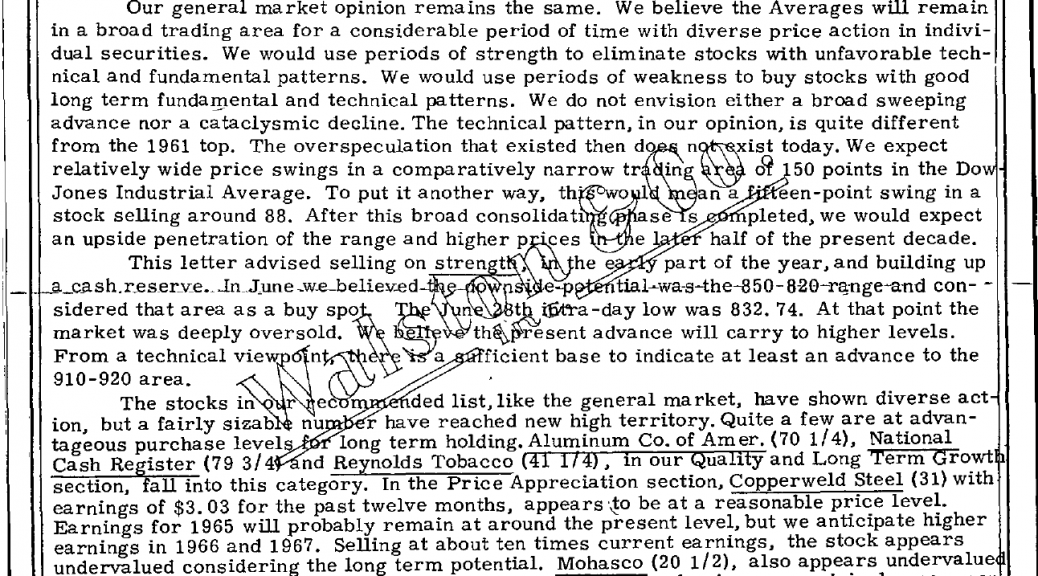 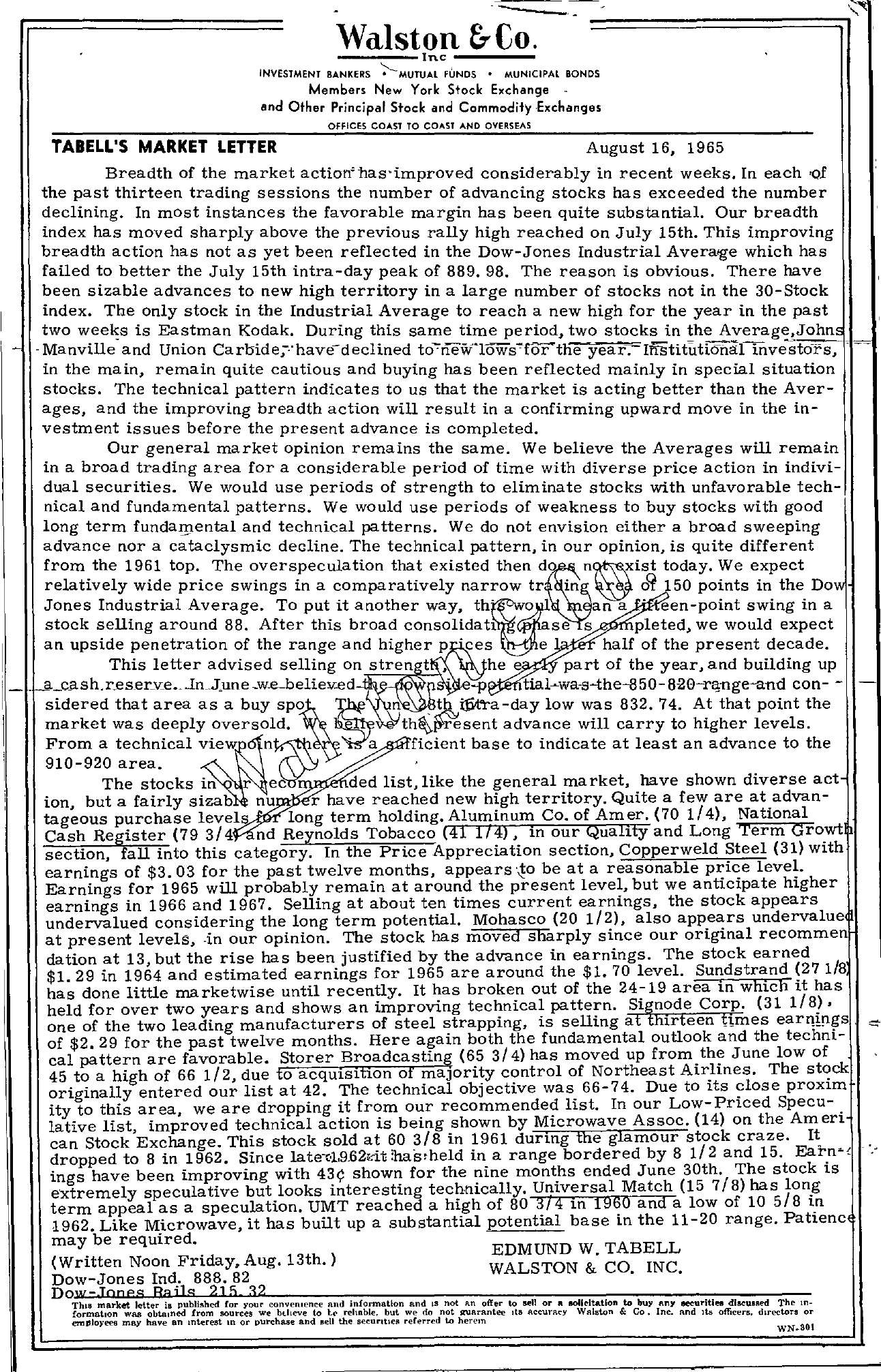 .- TABELL'S MARKET Walston &Co. Inc INVESTMENT BANKERS ''– MUTUAL FUNDS MUNICIPAL BONDS Members New York Stock Exchange . and Other Principal Stock and Commodity Exchanges OFFICES COAST TO COAST AND OVERSEAS LETTER August 16, 1965 Breadth of the market action'haS'improved considerably in recent weeks. In each '01 the past thirteen trading sessions the number of advancing stotks has exceeded the number declining. In most instances the favorable margin has been quite substantiaL Our breadth index has moved sharply above the previous rally high reached on July 15th. This improving breadth action has not as yet been reflected in the Dow-Jones Industrial Avera-ge which has failed to better the July 15th intra-day peak of 889. 98. The reason is obvious. There have been sizable advances to new high territory in a large number of stocks not in the 30-Stock index. The only stock in the Industrial Average to reach a new high for the year in the past two week;s is Eastman Kodak. During this same time period, two stocks in the Average,John -Manville and Union year. Institutional inve..st6rs, — in the main, remain quite cautious and buying has been reflected mainly in special situation stocks. The technical pattern indicates to us that the market is acting better than the Aver- ages, and the improving breadth action will result in a confirming upward move in the in- vestment issues before the present advance is completed. Our general market opinion remains the same. We believe the Averages will remain in a broad trading area for a considerable period of time with diverse price action in indivi- dual securities. We would use periods of strength to eliminate stocks with unfavorable tech- nical and fundamental patterns. We would use periods of weakness to buy stocks with good long term fundaI!1-ental and technical patterns. We do not envision either a broad sweeping advance nor a cataclysmic decline. The technical pattern, in our opinion, is quite different from the 1961 top. The overspeculation that existed then relatively wide price swings in a comparatively narrow tr in today. We expect 09 50 points in the Do Jones Industrial Average. To put it another way, 1 an a . een-point swing in a stock selling around 88. After this broad consolidati se s pleted, we would expect an upside penetration of the range and higher p 'ces e half of the present decade. This letter advised selling on stren t, he e part of the year, and building up . . .ln Junew.e-believ-ed . .e – p con– 1 sldered that area as a buy n th Wtra-day low was 832.74. At that point the market was deeply oversold. I From a technical view advance will carry to higher levels. . a ficient base to indicate at least an advance to the 910-920 area. . The stocks in ec ded list, like the general market, have shown diverse act ion, but a fairly sizab r have reached new high territory. Quite a few are at advan- tageous purchase levels long term holding. Aluminum Co. of Amer. (70 1/4), National Cash Register (79 3/4 nd Reynolds Tobacco (41 1/4), 10 our Quahty and Long Term Gro.wt section, fall into this category. In the Price Appreciation section, Copperweld Steel (31) wlth earnings of 3.03 for the past twelve appears be at a reasonable pxi;e Earnings for 1965 will probably remam at around the present level, but we antlclpate hlgher earnings in 1966 and 1967. Selling at about ten times current earnings, the stock appears undervalued considering the long term potentiaL Mohasco (20 also undervalue at present levels, in our opinion. The stock has moved sharply smce our ongmal recomme dation at 13, but the rise has been justified by the advance in earnings. The stock earned 1. 29 in 1964 and estimated earnings for 1965 are around the 1. 70 leveL Sur;dstrand 1/8 has done little marketwise until recently. It has broken out of the 24-19 area 10 WhlCh It has held for over two years and shows an improving technical pattern. Corp. (31 1/8J' one of the two leading manufacturers of steel strapping, is selling at hlrteen t1mes of 2.29 for the past twelve months. Here again both the fundamental outlook and the techm- – cal pattern are favorable. Storer (6.5 3/4) has moved up from June low of 45 to a high of 66 1/2, due to acqUlsltton of c;mtrol of Northeast Alr.l1Oes. The stck originally entered our list at 42. The techmcal objective was. 66-74. Due to ltS proxlm ity to this area, we are dropping it from our recommended hst. In our Low-Pnced Specu- . lative list improved technical action is being shown by Microwave Assoc. (14) on the Amen can Stock 'Exchange. This stock sold at 60 3/8 in 1961 dur10g the glamour stock craze. dropped to 8 in 1962. Since late1-1.9.62,d.tms,held in a range bordered by 8112 and 15. Ear.n' ings have been improving with 43 shown for the nine months ended June 30th. The stock lS extremely speculative but looks interesting technically. Universal Match (15 7/8) has lon.g term appeal as a speculation. UMT reached a high of 80 3/410 1960 and a low of 10 5/8 1.n 1962. Like Microwave, it has built up a substantial potential base in the 11-20 range. Patienc may be required. EDMUND W. TABELL (Written Noon Friday, Aug. 13th.) Dow-Jones Ind. 888. 82 WALSTON & CO. INC. DOHr-!ooes Rails 215 32 ThiS market Jetter is published for your convemenc(! nnd information and IS not an offer to sell or a solicitation to buy any 8eeUritle!l dlseuued The in- formation was obuuned from sources we bt.hcve to l rehnble. but we do not guRrantee Its accuracy WRiston & Co. Inc. And lUi officers. directors or emllJoyees may have an Interest in or purchase and llell the SeeUTltlcs referred to herem