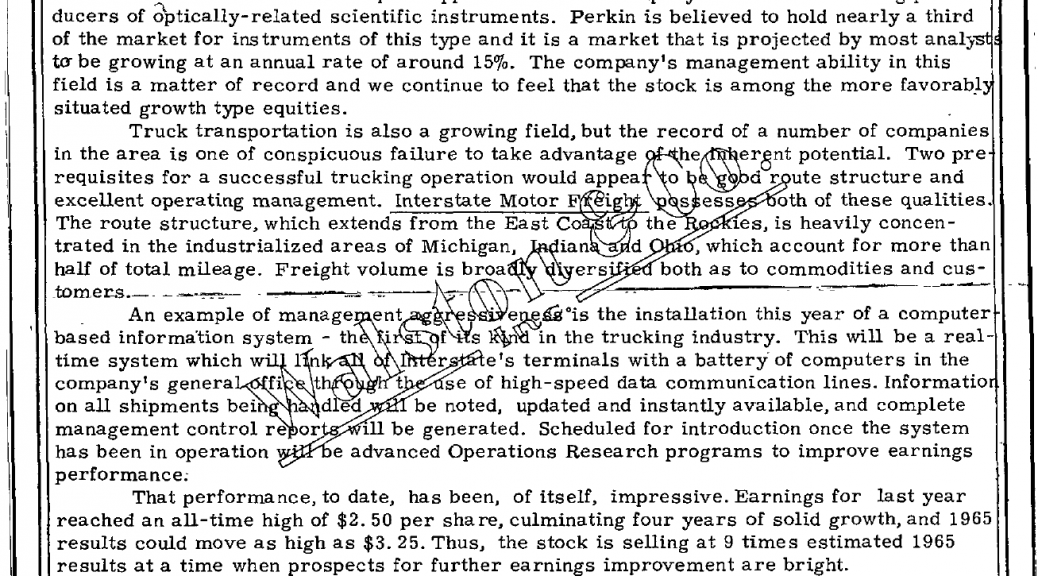 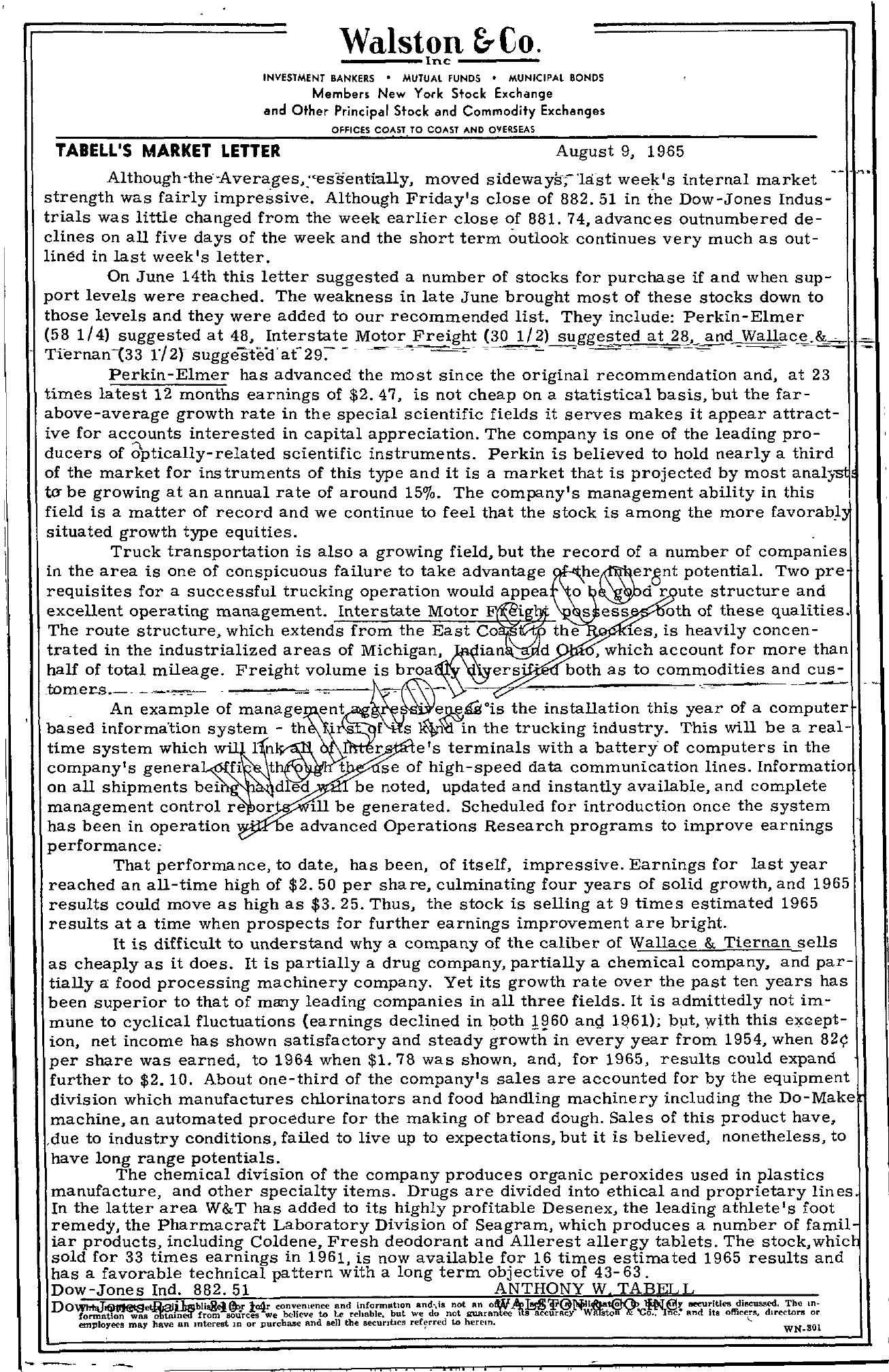 Walston &Co. Inc INVESTMENT BANKERS MUTUAL fUNDS MUNICIPAL BONDS Members New York Stock Exchange and Other Principal Stock and Commodity Exchanges OFFICES COAST TO COAST AND OVERSEAS TABELL'S MARKET LETTER August 9, 1965 Although-the-Averages,.essell.tially, moved sidewayi;;;-last week's internal market strength was fairly impressive. Although Friday's close of 882.51 in the Dow-Jones Indus- trials was little changed from the week earlier close of 881. 74, advances outnumbered de- clines on all five days of the week and the short term outlook continues very much as out- lined in last week's letter. On June 14th this letter suggested a number of stocks for purchase if and when sup- port levels were reached. The weakness in late June brought most of these stocks down to those levels and they were added to our recommended list. They include Perkin-Elmer (58 1 I 4) suggested at 48, Interstate Motor Freight (30 1/2) suggested at 28,.3!!!d '-.-. .', — Perkin-Elmer has advanced the most since the original recommendation and, at 23 times latest 12 months earnings of 2.47, is not cheap on a statistical basis, but the far- above-average growth rate in the special scientific fields it serves makes it appear attract- ive for accounts interested in capital appreciation. The company is one of the leading pro- ducers of dptically-related scientific instruments. Perkin is believed to hold nearly a third of the market for ins truments of this type and it is a market that is projected by most anal) to be growing at an annual rate of around 15. The company's management ability in this field is a matter of record and we continue to feel that the stock is among the more favorabl situated growth type equities. Truck transportation is also a growing field, but the record of a number of companies in the area is one of conspicuous failure to take advantage potential. Two pre requisites for a successful trucking operation would appea 0 r ute structure and excellent operating management. Interstate Motor B s ess oth of these qualities. The route structure, which extends from the East Co the les, is heavily concen- trated in the industrialized areas of d , which account for more than half of total mileage. Freight volume is both as to commodities and cus- tomersAn of manage- efujis this of a time system which wil I n r e's terminals with a battery of computers in the company's genera fi t t se of high-speed data communication lines. Informatio on all shipments bei d eo be noted, updated and instantly available, and complete management control re 111 be generated. Scheduled for introduction once the system has been in operation e advanced Operations Research programs to improve earnings performance; That performance, to date, has been, of itself, impressive. Earnings for last year reached an all-time high of 2.50 per share, culminating four years of solid growth, and 1965 results could move as high as 3.25. Thus, the stock is selling at 9 times estimated 1965 results at a time when prospects for further earnings improvement are bright. It is difficult to understand why a company of the caliber of Wallace & Tiernan sells as cheaply as it does. It is partially a drug company, partially a chemical company, and par- tiallya food processing machinery company. Yet its growth rate over the past ten years has been superior to that of many leading companies in all three fields. It is admittedly not im- mune to cyclical fluctuations (earnings declined in both ang 1f161); bllt, With this except- ion, net income has shown satisfactory and steady growth in every year from 1954, when 82 per share was earned, to 1964 when 1. 78 was shown, and, for 1965, results could expand further to 2. 10. About one-third of the company's sales are accounted for by the equipment division which manufactures chlorinators and food handling machinery including the Do-Make machine, an automated procedure for the making of bread dough. Sales of this product have, ,due to industry conditions, failed to live up to expectations, but it is believed, nonetheless, to have long range potentials. The chemical division of the company produces organic peroxides used in plastics manufacture, and other specialty items. Drugs are divided into ethical and proprietary lines. In the latter area W&T has added to its highly profitable Desenex, the leading athlete's foot remedy, the Pharmacraft Laboratory Division of Seagram, which produces a number of famil iar products, including Coldene, Fresh deodorant and Allerest allergy tablets. The stock, whic sold for 33 times earnings in 1961, is now available for 16 times estimated 1965 results and has a favorable technical pattern with a long term objective of 43- 63, Dow-Jones Ind. 882.51 ANTHONY W. TABELL 1 convenumce and Information and\is not an oW 10 'tJAT ti1t dil!eUSSed. The in- formation was from sources we believe to te reliable. but we do not guaranibtM accUrRCY Rnd Its office(s. dLredors or employeell may have an mterest In or purchase Rnd sell tlle securities ref;rred to hereIn. WNSOI I j I