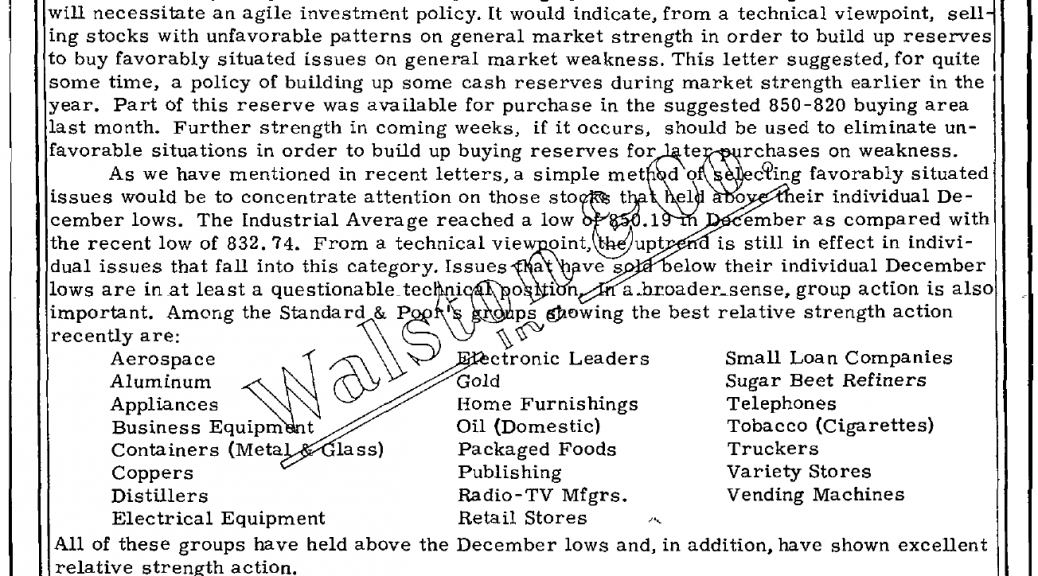 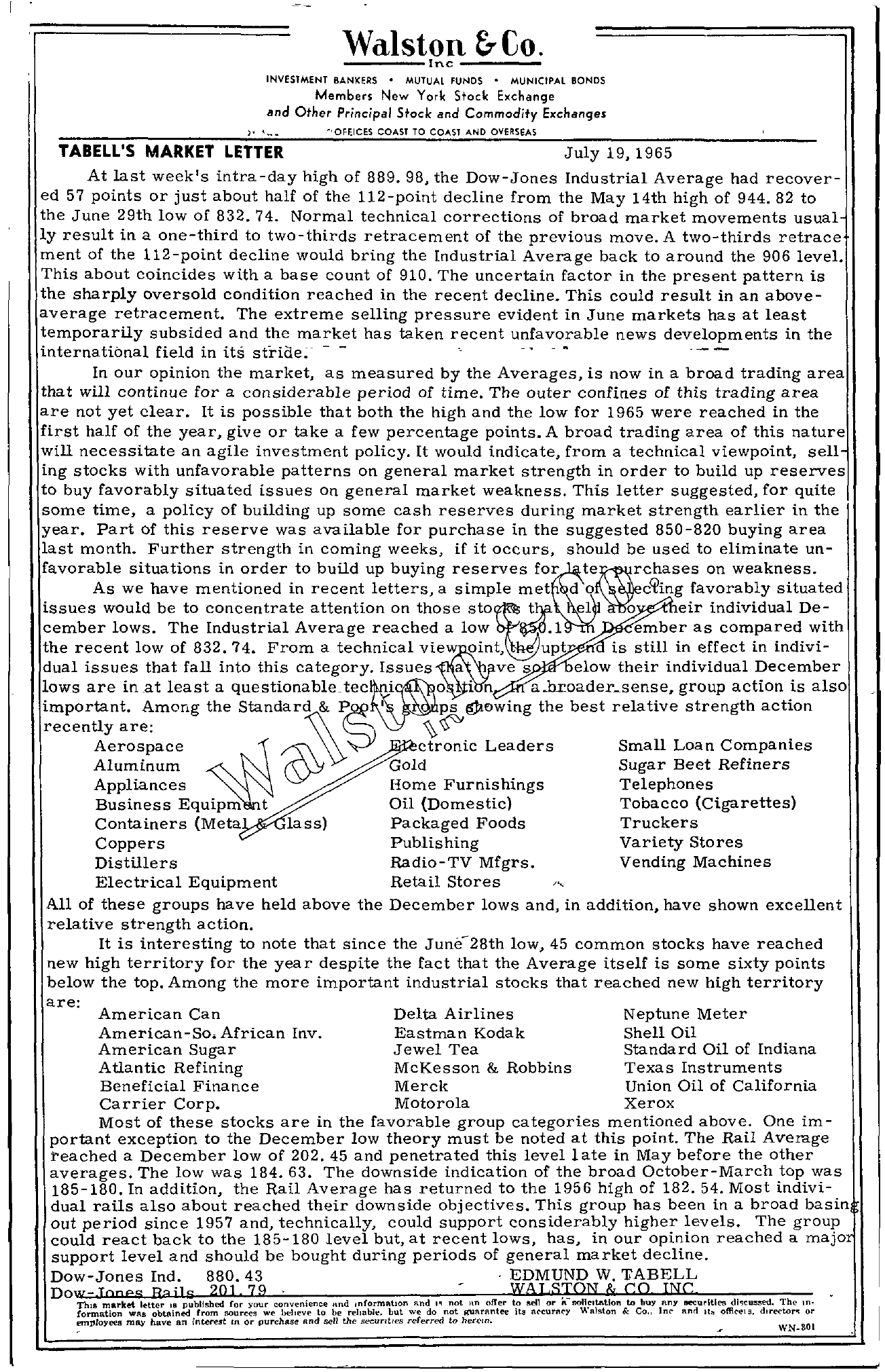 Walston &Co. Inc INVESTMENT BANKERS MUTUAL FUNDS MUNICIPAL BONDS Members New York Stock Exchange Bnci Other Principal Stock and Commodity Exchanges TABELL'S MARKET LETTER COAST TO COAST AND OVERSEAS July 19,1965 At last week's intra-day high of 889.98, the Dow-Jones Industrial Average had recover- ed 57 points or just about half of the 112-point decline from the May 14th high of 944.82 to the June 29th low of 832.74. Normal technical corrections of broad market movements usual ly result in a one-third to two-thirds retracement of the previous move. A two-thirds retrace ment of the 112-point decline would bring the Industrial Average back to around the 906 level. This about coincides with a base count of 910. The uncertain factor in the present pattern is the sharply oversold condition reached in the recent decline. This could result in an above- average retracement. The extreme selling pressure evident in June markets has at least temporarily subsided and the market has taken recent unfavorable news developments in the international field in its stride; – – – In our opinion the market, as measured by the Averages, is now in a broad trading area that will continue for a considerable period of time. The outer confines of this trading area are not yet clear. It is possible that both the high and the low for 1965 were reached in the first half of the year, give or take a few percentage points. A broad trading area of this nature will necessitate an agile investment policy. It would indicate, from a technical viewpoint, sell ing stocks with unfavorable patterns on general market strength in order to build up reserves to buy favorably situated issues on general market weakness. This letter suggested, for quite some time, a policy of building up some cash reserves during market strength earlier in the year. Part of this reserve was available for purchase in the suggested 850-820 buying area last month. Further strength in coming weeks, if it occurs, should be used to eliminate un- favorable situations in order to build up buying reserves on weakness. As we have mentioned in recent letters, a simple met d 0 ci!ing favorably situated issues would be to concentrate attention on those el 0 eir individual De- cember lows. The Industrial Average reached a low ember as compared with the recent low of 832.74. From a technical oint, upt is still in effect in indivi- dual issues that fall into this category. Issues a ve s elow their individual December lows are in at least a important. Among the Standard & &recently are 0 i n a.broadersense, group action is also ps owing the best relative strength action 0' Aerospace ctronic Leaders Small Loan Companies Aluminum Gold Sugar Beet Refiners Appliances Home Furnishings Telephones Business Equipm t Oil (Domestic) Tobacco (Cigarettes) Containers (Meta lass) Packaged Foods Truckers Coppers Publishing Variety Stores Distillers Radio-TV Mfgrs. Vending Machines Electrical Equipment Retail Stores All of these groups have held above the December lows and, in addition, have shown excellent relative strength action. It is interesting to note that since the June-28th low, 45 common stocks have reached new high territory for the year despite the fact that the Average itself is some sixty points below the top. Among the more important industrial stocks that reached new high territory are American Can Delta Airlines Neptune Meter American-So. African Inv. American Sugar Eastman Kodak Jewel Tea Shell Oil Standard Oil of Indiana Atlantic Refining McKesson & Robbins Texas Instruments Beneficial Finance Merck Union Oil of California Carrier Corp. Motorola Xerox Most of these stocks are in the favorable group categories mentioned above. One important exception to the December low theory must be noted at this point. The Rail Average reached a December low of 202. 45 and penetrated this level late in May before the other averages. The low was 184.63. The downside indication of the broad October-March top was 185-180. In addition, the Rail Average has returned to the 1956 high of 182.54. Most individual rails also about reached their downside objectives. This group has been in a broad basin out period since 1957 and, technically, could support considerably higher levels. The group could react back to the 185-180 level but, at recent lows, has, in our opinion reached a majo support level and should be bought during periods of general market decline. Dow-Jones Ind. 880.43 Dow-lanes Rans 201 79 . . EDMUND W. 'FABELL WALSJON & CO INC This market letter 18 published for your convenience Rnd mformatlon flnd not an offer to or II. !IOIlcltation to buy any M'CurlUes The In. formation WRS obtnlned from sources we believe to be reliable. but we do not gtlRrRntee its n('curn('y Walston & Co Ine anti It.. offi('t'ls. dlredor'! or emJ'ltoyees may have an interest In or purchase and sell the secUritIes referroo to her('ln. WNSOI