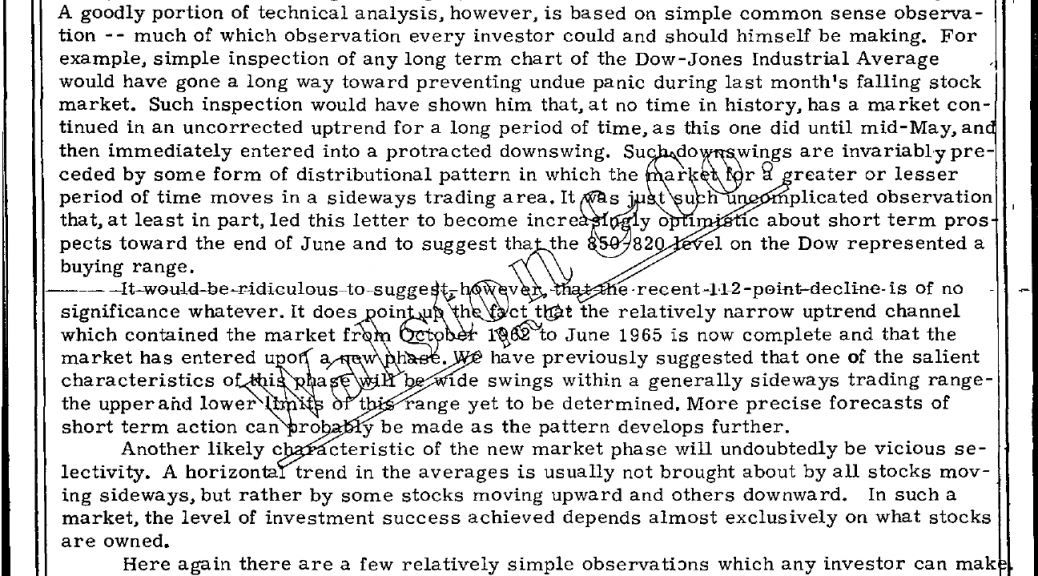 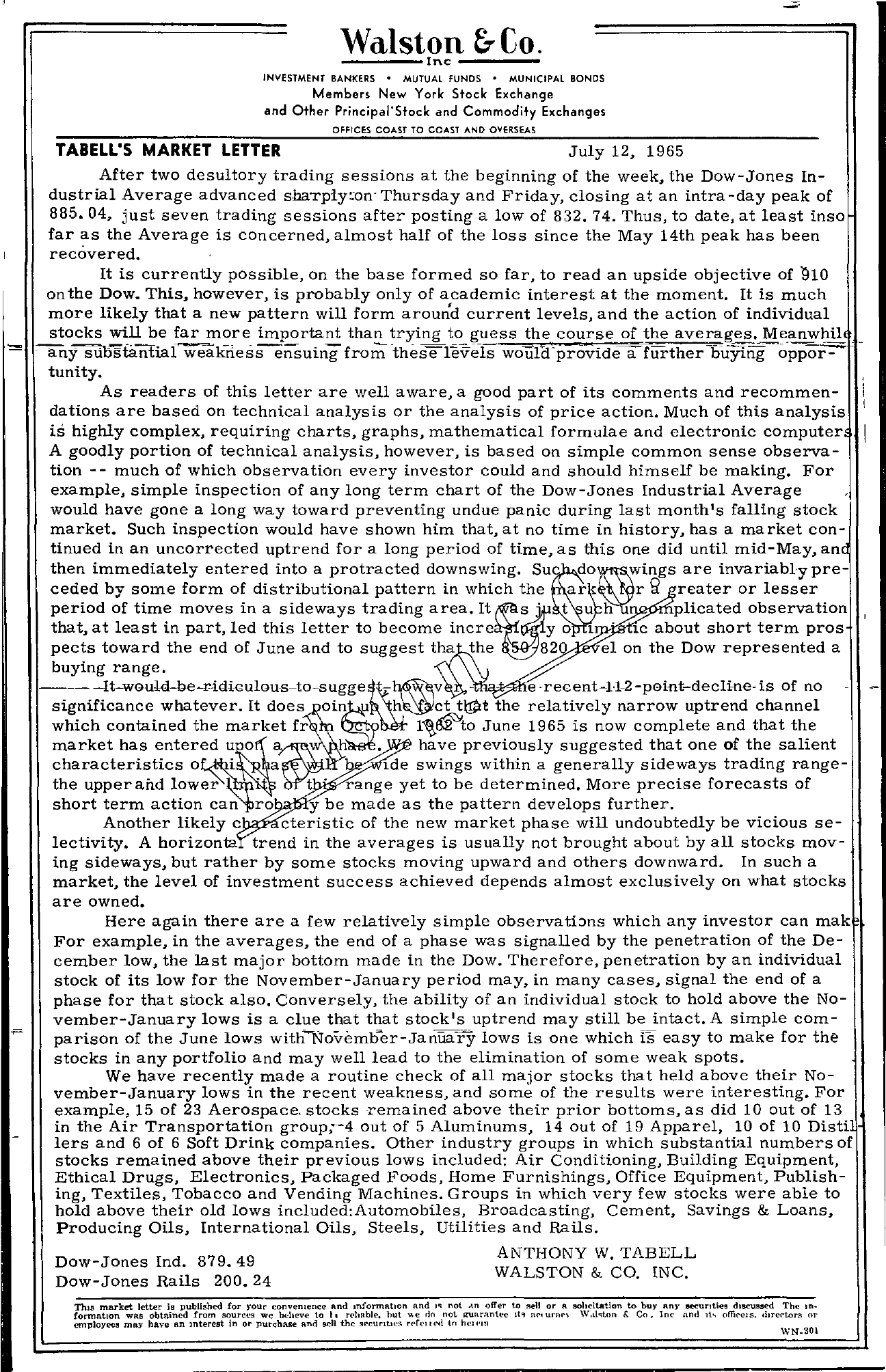 – Walston &- Co. Inc INVESTMENT BANKERS MUTUAL FUNDS MUNICIPAL BONDS Members New York Stock Exchange and Other Principal'Stock and Commodity Exchanges OFFICES COAST TO COAST AND OVERSEAS TABELL'S MARKET LETTER July 12, 1965 After two desultory trading sessions at the beginning of the week, the Dow-Jones In- dustrial Average advanced Thursday and Friday, closing at an intra-day peak of 885.04, just seven trading sessions after posting a low of 832.74. Thus, to date, at least inso far as the Average is concerned, almost half of the loss since the May 14th peak has been recovered. It is currently possible, on the base formed so far, to read an upside objective of '910 on the Dow. This, however, is probably only of a,cademic interest at the moment. It is much more likely that a new pattern will form around current levels, and the action of individual stocks will be far more important than trying to guess the course of the averages. Meanwhil – – any subStantial wealCri.essensuing Ieve1s woula-provide a further buying oppor– tunity. As readers of this letter are well aware, a good part of its comments and recommen- dations are based on technical analysis or the analysis of price action. Much of this analysis is highly complex, requiring charts, graphs, mathematical formulae and electronic computer A goodly portion of technical analysis, however, is based on simple common sense observa- tion – – much of which observation every investor could and should himself be making. For example, simple inspection of any long term chart of the Dow-Jones Industrial Average would have gone a long way toward preventing undue panic during last month's falling stock market. Such inspection would have shown him that, at no time in history, has a market con- tinued in an uncorrected uptrend for a long period of time, as this one did until mid-May, an then immediately entered into a protracted downswing. ceded by some form of distributional pattern in which the ar are invariably prer \jl reater or lesser period of time moves in a sideways trading area. that, at least in part, led this letter to become incre pects toward the end of June and to suggest tha the buying range. – — t u Ii plicated observation y 0 1 – 1C about short term pros 820 el on the Dow represented a e-recent-H-2-point-decline-is of no , significance whatever. It which contained the market fr tWtt the relatively narrow uptrend channel June 1965 is now complete and that the market has entered Ii . have previously suggested that one of the salient characteristics a 1de swings within a generally sideways trading range- the upperaild lower . t range yet to be determined. More precise forecasts of short term action can ro y be made as the pattern develops further. Another likely c cteristic of the new market phase will undoubtedly be vicious se- lectivity. A horizonta trend in the averages is usually not brought about by all stocks mov- ing sideways, but rather by some stocks moving upward and others downward. In such a market, the level of investment success achieved depends almost exclusively on what stocks are owned. Here again there are a few relatively simple observatims which any investor can mak For example, in the averages, the end of a phase was signalled by the penetration of the De- cember low, the last major bottom made in the Dow. Therefore, penetration by an individual stock of its low for the November-January period may, in many cases, signal the end of a phase for that stock also. Conversely, the ability of an individual stock to hold above the No- vember-January lows is a clue that that stock's uptrend may still be intact. A simple com- parison of the June lows lows is one which Is easy to make for the stocks in any portfolio and may well lead to the elimination of some weak spots. We have recently made a routine check of all major stocks that held above their No- vember-January lows in the recent weakness, and some of the results were interesting. For example, 15 of 23 Aerospace, stocks remained above their prior bottoms, as did 10 out of 13 in the Air Transportation group;-4 out of 5 Aluminums, 14 out of 19 Apparel, 10 of 10 Disti lers and 6 of 6 Soft Drink companies. Other industry groups in which substantial numbers of stocks remained above their previous lows included Air Conditioning, Building Equipment, Ethical Drugs, Electronics, Packaged Foods, Home Furnishings, Office Equipment, Publish- ing, Textiles, Tobacco and Vending Machines. Groups in which very few stocks were able to hold above their old lows includedAutomobiles, Broadcasting, Cement, Savings & Loans, Producing Oils, International Oils, Steels, Utilities and Rails. Dow-Jones Ind. 879.49 Dow-Jones Rails 200. 24 ANTHONY W. TAB ELL WALSTON & CO. INC. ThiS market letter is llubllshed for )'our convenience And mfOTmRtlon and I'! not .\1\ offer to sell or R sohdt.ation to buy Rny l!I('('untie!l dlseussed The In annntton WflS obtained from soure!..'!! we believe to I, r('llItble, l)ut \\c rio not. punrante(' It.. nC', unl('\ \V,\\;ton . Co, lnc lind (Iffi('('IS, .hr('('tors or employees may have fin mter!st in or purchase and sell the s('cuntll'S 1,.1 tn hCIlfl WN301