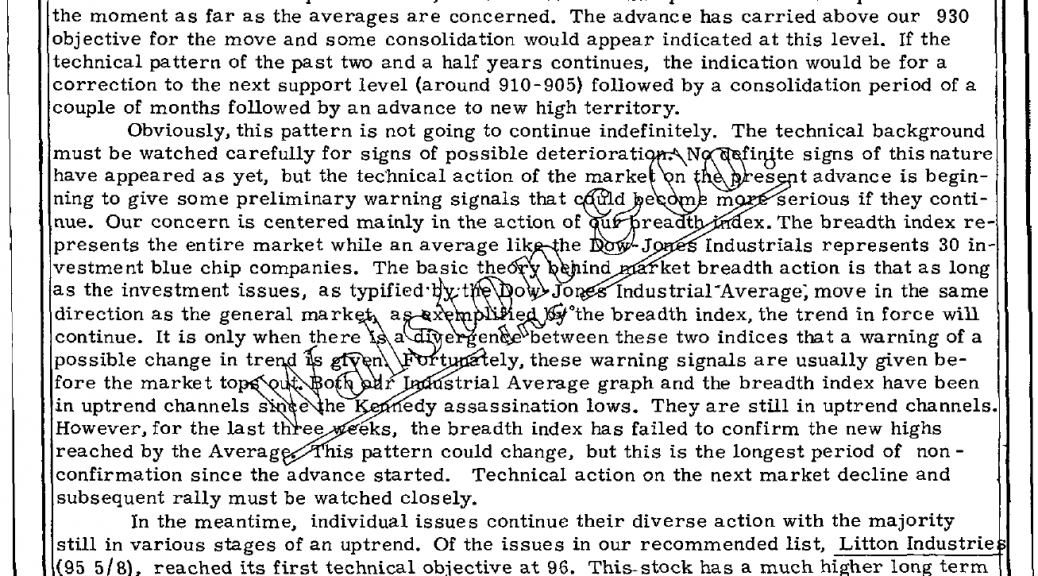 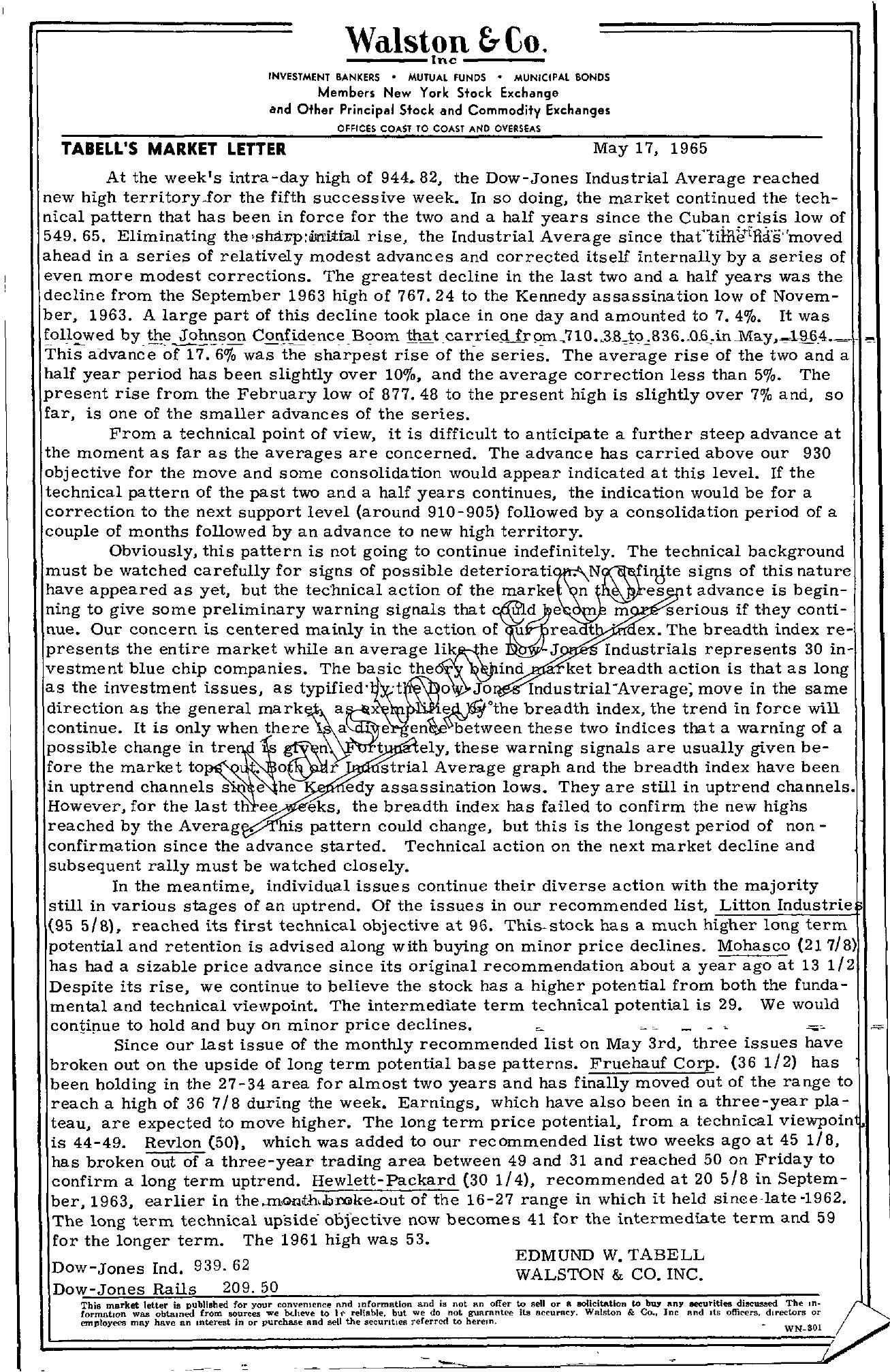 Walston &Co. —–Inc —-INVESTMENT BANKERS MUTUAL FUNOS MUNICIPAL BONDS Members New York Stock Exchange and Other Principal Stock and Commodity Exchanges OFFICES COAST TO COAST AND OVERSEAS TABELL'S MARKET LETTER May 17, 1965 At the week's intra-day high of 944.82, the Dow-Jones Industrial Average reached new high territoryfor the fifth successive week. In so doing, the market continued the tech- nical pattern that has been in force for the two and a half years since the Cuban crisis low of 549. 65. Eliminating the shaLpWni.tia!1 rise, the Industrial Average since thaCtiHl.l!lfiilsmoved ahead in a series of relatively modest advances and corrected itself internally by a series of even more modest corrections. The greatest decline in the last two and a half years was the decline from the September 1963 high of 767.24 to the Kennedy assassination low of Novem- ber, 1963. A large part of this decline took place in one day and amounted to 7.4. It was itlat.carrietlrom310.. . .,. This aavance of 17.6 was the sharpest rise of the series. The average rise of the two and a half year period has been slightly over 10, and the average correction less than 5. The present rise from the February low of 877.48 to the present high is slightly over 7 and, so far, is one of the smaller advances of the series. From a technical point of view, it is difficult to anticipate a further steep advance at the moment as far as the averages are concerned. The advance has carried above our 930 objective for the move and some consolidation would appear indicated at this level. If the technical pattern of the past two and a half years continues, the indication would be for a correction to the next support level (around 910-905) followed by a consolidation period of a couple of months followed by an advance to new high territory. Obviously, this pattern is not going to continue indefinitely. The technical background must be watched carefully for signs. of signs of have appeared as yet, but the tec'hmcal actlOn of the marke n P!W'es t advance 1S begm- ning to give some preliminary warning signals that r e e m serious if they conti- nue. Our concern is centered mainly in the action of urea t . ex. The breadth index re- presents the entire market while an average l ! i 'hke J Industrials represents 30 in- vestment blue chip companies. The basic the ind ket breadth action is that as long as the investment issues, as 0 0 Industrial-Average; move in the same direction as the general . breadth index, the trend in force will continue. It is only when there a e between these two indices that a warning of a possible change in t ely, these warning signals are usually given be- fore the market strial Average graph and the breadth index have been in uptrend channels s e he edy assassination lows. They are still in uptrend channels. However, for the last th ee eks, the breadth index has failed to confirm the new highs reached by the Averag his pattern could change, but this is the longest period of non- confirmation since the advance started. Technical action on the next market decline and subsequent rally must be watched closely. In the meantime, individual issues continue their diverse action with the majority still in various stages of an uptrend. Of the issues in our recommended list, Litton Industrie (95 5/8), reached its first technical objective at 96. This-stock has a much higher long term potential and retention is advised along with buying on minor price declines. Mohasco (217/8) has had a sizable price advance since its original recommendation about a year ago at 13 1/2 Despite its rise, we continue to believe the stock has a higher potential from both the funda- mental and technical viewpoint. The intermediate term technical potential is 29. We would conti!1ue to hold and buy on minor price declines. – Since our last issue of the monthly recommended list on May 3rd, three issues have broken out on the upside of long term potential base patterns. Fruehauf Corp. (36 1/2) has been holding in the 27-34 area for almost two years and has finally moved out of the range to reach a high of 367/8 during the week. Earnings, which have also been in a three-year pla- teau, are expected to move higher. The long term price potential, from a technical viewpoin is 44-49. Revlon (50), which was added to our recommended list two weeks ago at 45 1/8, has broken out of a three-year trading area between 49 and 31 and reached 50 on Friday to confirm a long term uptrend. Hewlett-Packard (30 1/4), recommended at 205/8 in Septem- ber,1963, earlier in the.m(w.dh,,crok-eLout of the 16-27 range in which it held sincelate1962. The long term technical upside' obJective now becomes 41 for the intermediate term and 59 for the longer term. The 1961 high was 53. DOW-Jones Ind. 939.62 EDMUND W. TABELL WALSTON & CO. INC. Dow-Jones Rails 209. 50This market letter is published for your convemence Bnd mformation and is not fl.n offer to sell or fL solicitAtion to buy any eeeurities diseus&ed The information was obtamed from sources we b.heve to 11' reliable. but we do not guarantee its 81IUraey, Walston & Co Inl and Its officers. dIrectors or Vemployees may have an lftU!rest in or purehlUle and sell the seeurltwlI referred to herem, -WNSOI