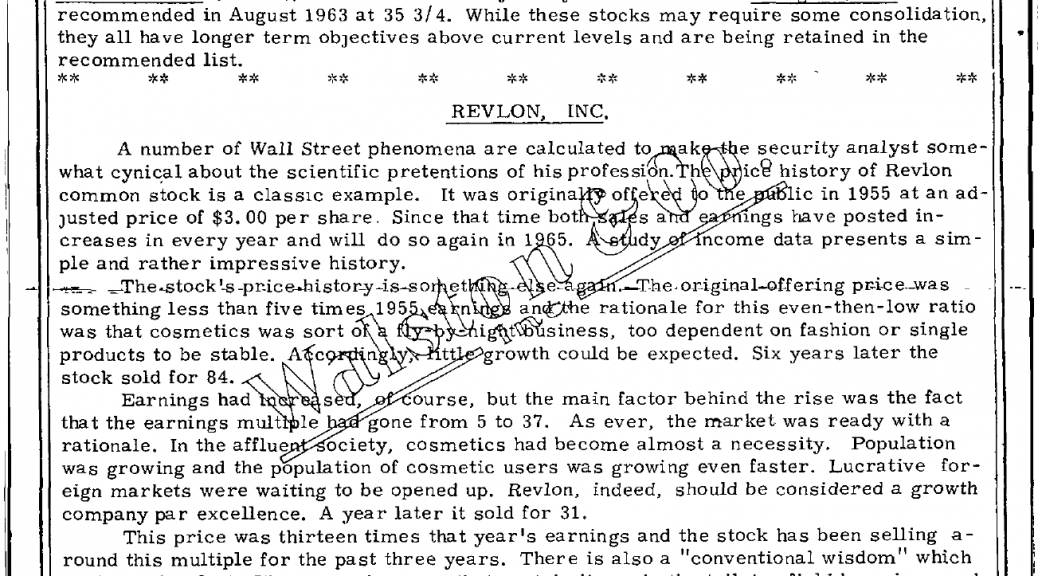 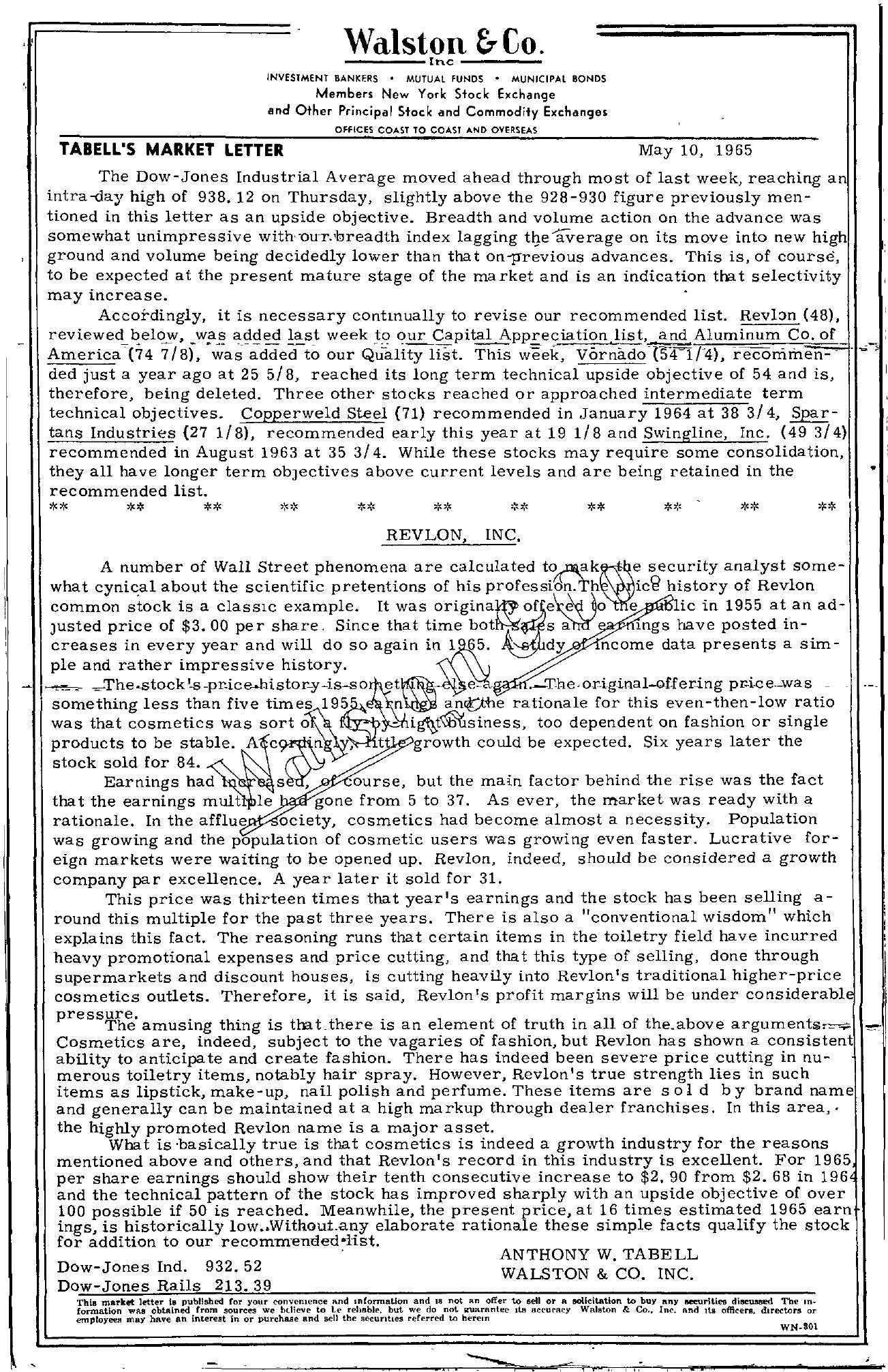 Walston &- Co. INVESTMENT BANKERS MUTUAL FUNDS MUNICIPAL BONDS Members New York Stock Exchange and Other Principal Stock and Commodity Exchanges OFfiCES COAST TO COAST AND OVERSEAS TABEll'S MARKET lETTER May 10, 1965 The Dow-Jones Industrial Average moved ahead through most of last week, reaching an intra-day high of 938.12 on Thursday, slightly above the 928-930 figure previously men- tioned in this letter as an upside objective. Breadth and volume action on the advance was somewhat unimpressive withouT.'IDreadth index lagging tleaverage on its move into new high ground and volume being decidedly lower than tha t on1Yrevious advances. This is, of course, to be expected at the present mature stage of the market and is an indication that selectivity may increase. Accordingly, it is necessary contmually to revise our recommended list. Revbn (48), reviewed adied last week t,o our list, an!LAluminum Co. of America (74 7/8), was added to our Qu-ality list. This week, recoriimen- ' … , ded just a year ago at 25 5/8, reached its long term technical upside objective of 54 and is, therefore, being deleted. Three other stocks reached or approached intermediate term technical objectives. Copperweld Steel (71) recommended in January 1964 at 38 3/4, Spar- tans Industries (27 1/8), recommended early this year at 19 1/ 8 and Swingline, Inc. (49 3/4) recommended in August 1963 at 35 3/4. While these stocks may require some consolidation, they all have longer term obJectives above current levels and are being retained in the recommended list. REVLON, INC. A number of Wall Street phenomena are calculated security analyst SOme- what cynical about the scientific pretentions of his professi8n.th icl history of Revlon common stock is a claSSiC example. It was to e ic in 1955 at an ad- Justed price of 3.00 per share. Since that time botfH.t s lOgS bave posted in- creases in every year and will do so again dy ncome data presents a sim- ple and rather impressive history. e- .The.oJOiginalotfer.ing pr.i.ce,.was – , something less than five anct;the rationale for this even-then-Iow ratio was that cosmetics was sort 0 – too dependent on fashion or single products to be A , t growth could be expected. Six years later the stock sold for 84. Earnings had s, ourse, but the main factor behind the rise was the fact that the earnings mult Ie gone from 5 to 37. As ever, the market was ready with a rationale. In the afflue ociety, cosmetics had become almost a necessity. Population was growing and the population of cosmetic users was growing even faster. Lucrative for- eign markets were waiting to be opened up. Revlon, indeed, should be considered a growth company par excellence. A year later it sold for 31. This price was thirteen times that year's earnings and the stock has been selling a- round this multiple for the past three years. There is also a conventional wisdom which explains this fact. The reasoning runs that certain items in the toiletry field have incurred heavy promotional expenses and price cutting, and tha t this type of selling, done through supermarkets and discount houses, is cutting heavily into Revlon's traditional higher-price cosmetics outlets. Therefore, it is said, Revlon's profit margins will be under considerabl pressuTrhee. amusing thing is thatthere is an element of truth in all of the.above Cosmetics are, indeed, subject to the vagaries of fashion, but Revlon has shown a consistent ability to anticipate and create fashion. There has indeed been severe price cutting in numerous toiletry items, notably hair spray. However, Revlon's true strength lies in such items as lipstick, make-up, nail polish and perfume. These items are sol d by brand name and generally can be maintained at a high markup through dealer franchises. In this area, . the highly promoted Revlon name is a major asset. What is basically true is that cosmetics is indeed a growth industry for the reasons mentioned above and others, and that Revlon's record in this industry is excellent. For 1965 per share earnings should show their tenth consecutive increase to 2.90 from 2. 68 in 196 and the technical pattern of the stock has improved sharply with an upside objective of over 100 possible if 50 is reached. MeanWhile, the present price, at 16 times estimated 1965 earn ings, is historically 10w.With.out.any elaborate rationale these simple facts qualify the stock for addition to our recomm-endedoJ.ist. Dow-Jones Ind. 932. 52 Dow-Jones Rails 213. 39 ANTHONY W. TABELL WALSTON & CO. INC. This market letter is published (or your convemence and information and IS not an offer to sell or II. solicitation to buy rlny eeeurlUes discussed The m formation WI'Ll! obtained from sourcl2'S we b(.1ieve to Le rehable. but we do not guarantee Ita accuracy Walston &. Co Inc. and 1tS offieers. dlreetors or employeefl may have an Interest In or purchue alld sell the securities referred to herein WNSOl