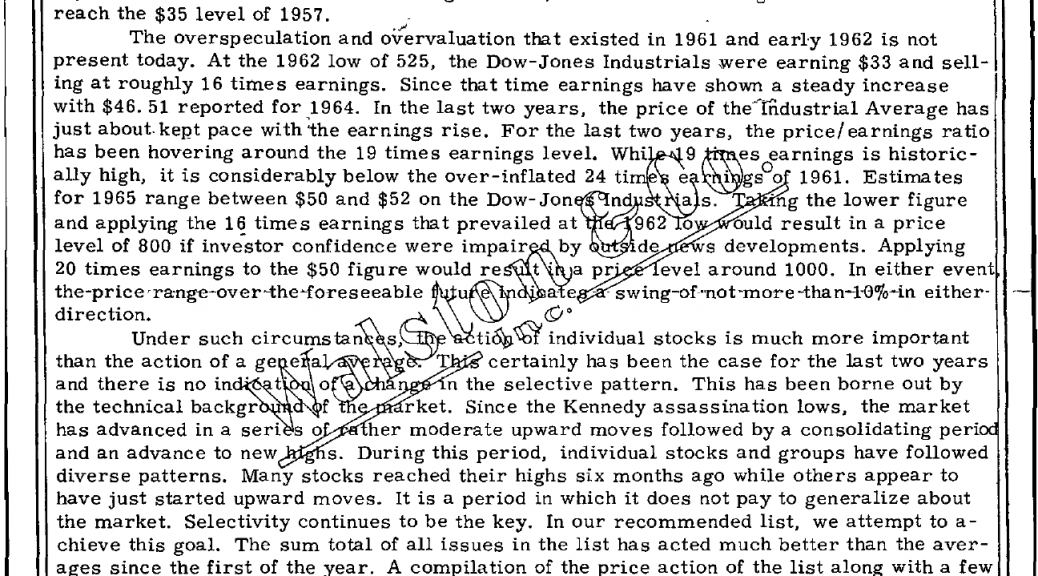 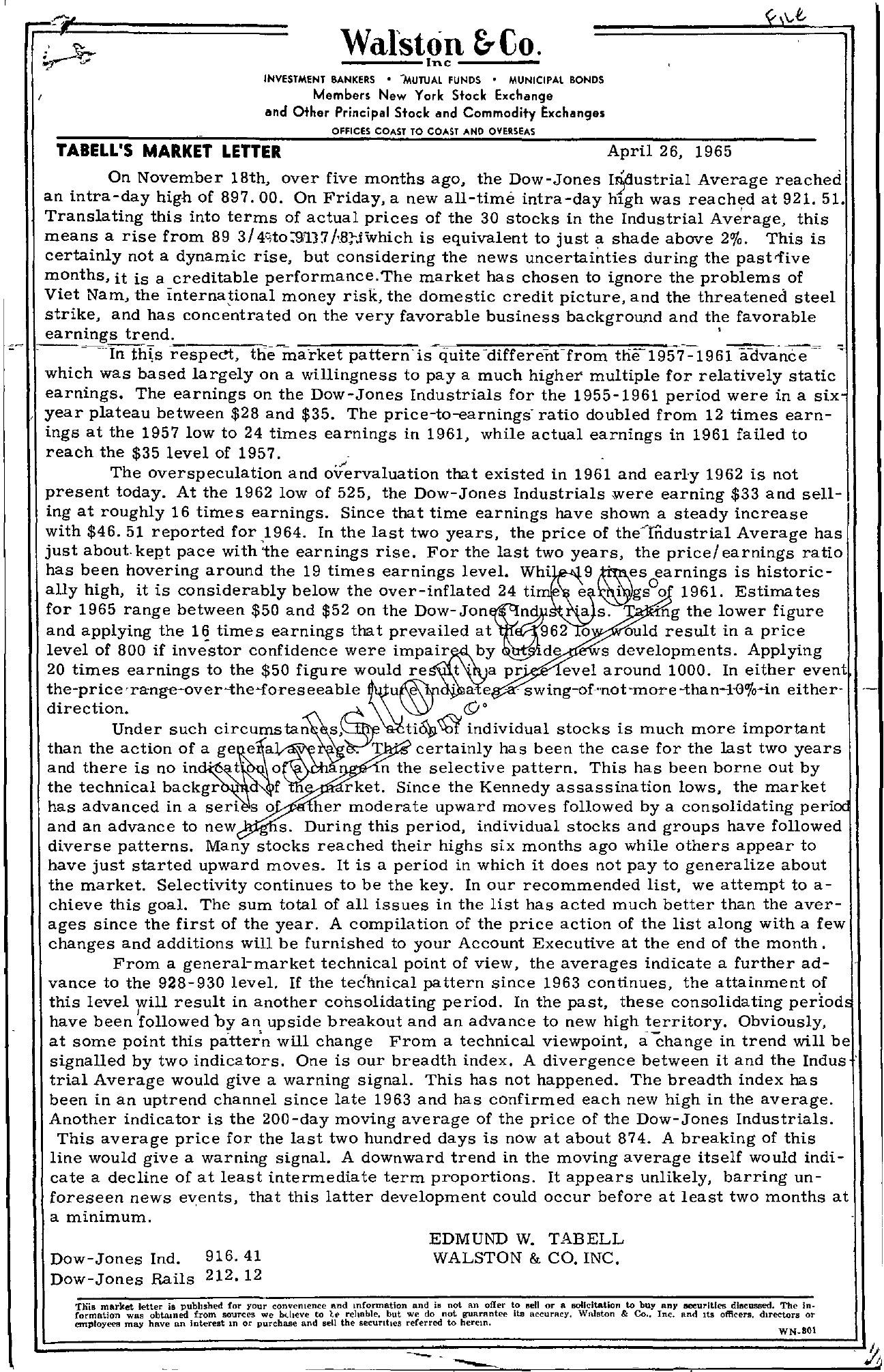 TABELL'S MARKET Walston &Co. —–Inc —-INVESTMENT BANKERS MUTUAL FUNDS MUNICIPAL BONDS Members New York Stock Exchange and Other Principal Stock and Commodity OFFICES COAST TO COAST AND OVERSEAS LEnER April 26, 1965 On November 18th, over five months ago, the Dow-Jones Iustria1 Average reached an intra-day high of 897.00. On Friday, a new ali-time intra-day high was reached at 921. 51. Translating this into terms of actual prices of the 30 stocks in the Industrial Average, this means a rise from 89 3/4Qto9'lJ1 is equivalent to just a shade above 2. This is certainly not a dynamic rise, but considering the news uncertainties during the past1ive months, it is a creditable performance.The market has chosen to ignore the problems of Viet Nam, the money risk, the domestic credit picture, and the threatened steel strike, and has concentrated on the very favorable business background and the favorable earnings trend. ' respect, tJie-market pattern-is-quite-different from tlie -. which was based largely on a willingness to pay a much higher multiple for relatively static earnings. The earnings on the Dow-Jones Industrials for the 1955-1961 period were in a six year plateau between 28 and 35. The price-to-earnings- ratio doubled from 12 times earn- ings at the 1957 low to 24 times earnings in 1961, while actual earnings in 1961 failed to reach the 35 level of 1957. .0' The overspeculation and overvaluation that existed in 1961 and early 1962 is not present today. At the 1962 low of 525, the Dow-Jones Industrials were earning 33 and sell- ing at roughly 16 times earnings. Since that time earnings have shown a steady increase with 46. 51 reported for )964. In the last two years, the price of the/rridustrial Average has just about. kegt pace with the earnings rise. For the last two years, the price! earnings ratio has been hovering around the 19 times earnings level. ally high, it is considerably below the over-inflated 24 ti 9 e earnings is historic1961. Estimates for 1965 range between 50 and 52 on the 'a s. -ng the lower figure and applying the 16 times earnings that prevailed at 962 0 ould result in a price level of 800 if investor confidence were 20 times earnings to the 50 figure would re direction. Under such W by de s developments. Applying t' apr' evel around 1000. In either event . a e – -swing-of-not-more-than-1-0-in either- yo individual stocks is much more important than the action e and there is no in' t' 0 the technical backgr f . T' certainly has been the case for the last two years n the selective pattern. This has been borne out by rket. Since the Kennedy assassination lows, the market has advanced in a seri s 0 her moderate upward moves followed by a consolidating peri and an advance to new s. During this period, individual stocks and groups have followed diverse patterns. Many stocks reached their highs six months ago while others appear to have just started upward moves. It is a period in which it does not pay to generalize about the market. Selectivity continues to be the key. In our recommended list, we attempt to a- chieve this goal. The sum total of all issues in the list has acted much better than the aver- ages since the first of the year. A compilation of the price action of the list along with a few changes and additions will be furnished to your Account Executive at the end of the month. From a general-market technical point of view, the averages indicate a further ad- vance to the 928-930 level. If the technical pattern since 1963 continues, the attainment of this level will result in another consolidating period. In the past, these consolidating period I have been followed by an upside breakout and an advance to new high territory. Obviously, at some point this patterOn will change From a technical viewpoint, achange in trend will be signalled by two indicators. One is our breadth index. A divergence between it and the Indus trial Average would give a warning signal. This has not happened. The breadth index has been in an uptrend channel since late 1963 and has confirmed each new high in the average. Another indicator is the 200-day moving average of the price of the Dow-Jones Industrials. This average price for the last two hundred days is now at about 874. A breaking of this line would give a warning signal. A downward trend in the moving average itself would indi- cate a decline of at least intermediate term proportions. It appears unlikely, barring un- foreseen news events, that this latter development could occur before at least two months at a minimum. Dow-Jones Ind. 916.41 EDMUND W. TABELL WALSTON & CO. INC. Dow-Jones Rails 212. 12 ThiS market letter is published for your convenience and mformatlon and is not an offer to Bell or a BollcltatloJl to buy Rny eeeurities discussed. The in- formation was obtamed from sources We b..lieve to tt reliable. but we do not IfURrantee Its accurRCY, Wl\lston & Co,. Inc. and Its offieers, directors or emZ'loyeea may have an Interest In or purchase and sell the securities referred to herein. — – WN.801