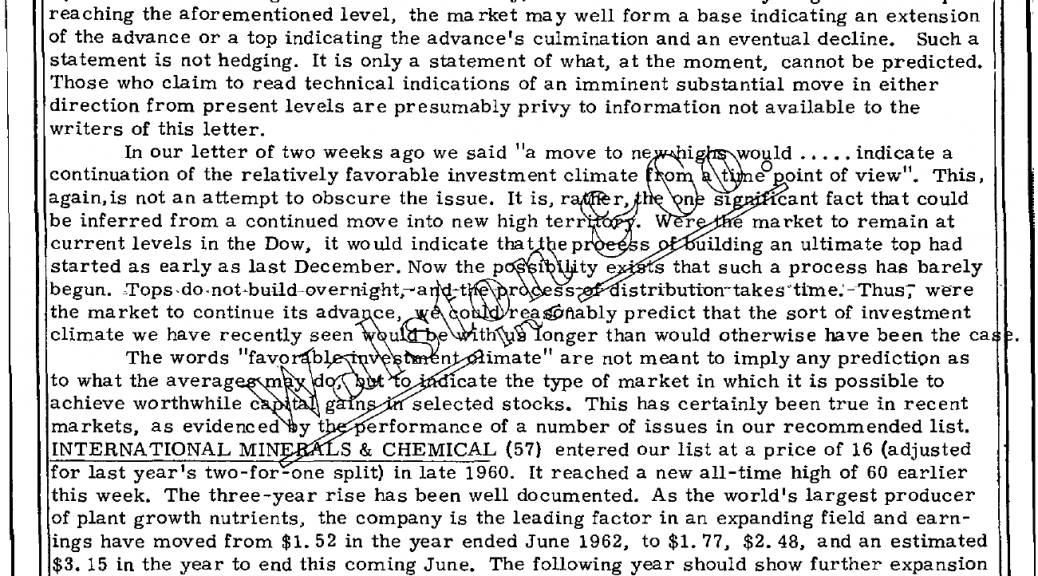 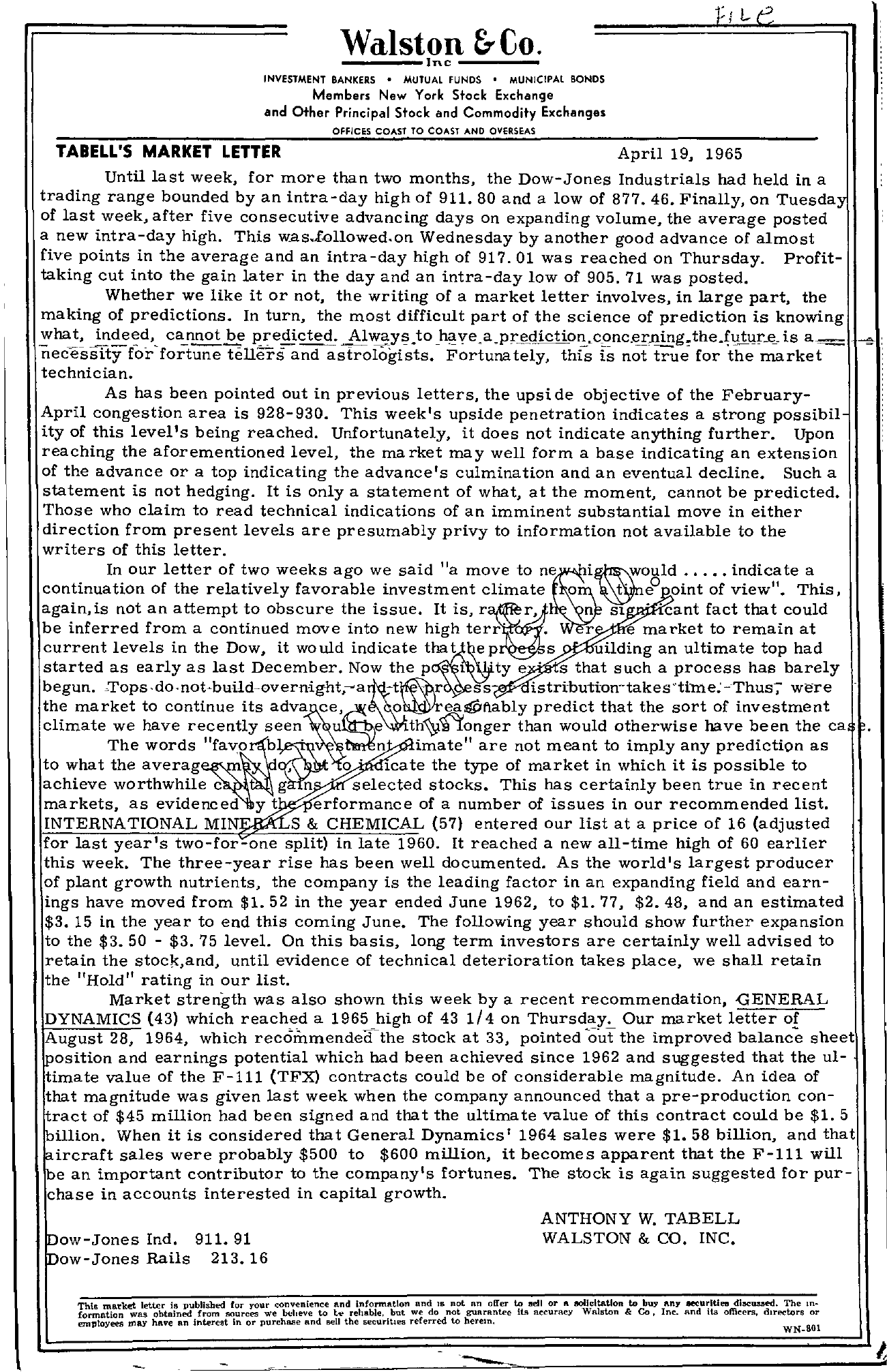 Walston &- Co. — Inc ——— INVESTMENT BANKERS MUTUAL FUNDS MUNICIPAL BONDS Members New York Stock Exchange and Other Principal Stock and Commodity Exchanges OFFICES COAST TO COAST AND OVERSEAS TABELL'S MARKET LETTER April 19, 1965 Until last week, for more than two months, the Dow-Jones Industrials had held in a trading range bounded by an intra-day high of 911. 80 and a low of 877.46. Finally, on Tuesday of last week, after five consecutive advancing days on expanding volume, the average posted a new intra-day high. This w.as..f.ollowed.on Wednesday by another good advance of almost five points in the average and an intra-day high of 917.01 was reached on Thursday. Profit- taking cut into the gain later in the day and an intra-day low of 905.71 was posted. Whether we like it or not, the writing of a market letter involves, in large part, the making of predictions. In turn, the most difficult part of the science of prediction is knowing jJredicted. Alw.ays.to hlve,a,prS'dicti0fl.. is a -. necessity for fortune tellers and astrologists. Fortunately, this is not true for the market technician. As has been pointed out in previous letters, the upsi de objective of the February- April congestion area is 928-930. This week's upside penetration indicates a strong possibil ityof this level's being reached. Unfortunately, it does not indicate anything further. Upon reaching the aforementioned level, the ma rket may well form a base indicating an extension of the advance or a top indicating the advance's culmination and an eventual decline. Such a statement is not hedging. It is only a statement of what, at the moment, cannot be predicted. Those who claim to read technical indications of an imminent substantial move in either direction from present levels are presumably privy to information not available to the writers of this letter. In our letter of two weeks ago we said a move to ne' ….. indicate a continuation of the relatively favorable investment climate 0 of view. This, again,is not an attempt to obscure the issue. It is, r a ' n Sl cant fact that could be inferred from a continued move into new high terr' . r e ma rket to remain at current levels in the Dow, it would indicate p s uilding an ultimate top had started as early as last December. Now the p l ' 'ty e' s that such a process has barely begun. ss- istrtbutton-takestime;-Thus7 were . the market to continue its ohhbJreaiWfiably predict that the sort of investment climate we have recently seen u e than would otherwise have been the ca The words to what the averag n imate are not meant to imply any prediction as , 0 ' lcate the type of market in which it is possible to achieve worthwhile c g n selected stocks. This has certainly been true in recent markets, as evidenced y t erformance of a number of issues in our recommended list. INTERNATIONAL MINFJ S & CHEMICAL (57) entered our list at a price of 16 (adjusted for last year's two-for'one split) in late 1960. It reached a newall-time high of 60 earlier this week. The three-year rise has been well documented. As the world's largest prOducer of plant growth nutrients, the company is the leading factor in an expanding field and earn- ings have moved from 1. 52 in the year ended June 1962, to 1. 77, 2.48, and an estimated 3. 15 in the year to end this coming June. The following year should show further expansion to the 3.50 – 3.75 level. On this basis, long term investors are certainly well advised to retain the stock,and, until evidence of technical deterioration takes place, we shall retain the Hold rating in our list. Market strength was also shown this week by a recent recommendation, GENERAL DYNAMICS (43) which reached a 1965 high of 43 1/4 on Thursday. Our market letter of August 28, 1964, which recommendecrthe stock at 33, pointed '-Out the improved balance sheet position and earnings potential which had been achieved since 1962 and suggested that the ul- timate value of the F-111 (TFX) contracts could be of considerable magnitude. An idea of that magnitude was given last week when the company announced that a pre-production con- tract of 45 million had been signed and tha t the ultima te value of this contract could be 1. 5 When it is considered that General Dynamics' 1964 sales were 1. 58 billion, and that fircraft sales were probably 500 to 600 million, it becomes apparent that the F-111 will be an important contributor to the company's fortunes. The stock is again suggested for pur- chase in accounts interested in capital growth. pow-Jones Ind. 911. 91 iDow-Jones Rails 213.16 ANTHONY W. TAB ELL WALSTON & CO. INC. This letter is published for your convenience and information and 18 not an offer to tleU or 8OI1c1tatlon to buy Any MCurltiea The in- formntion was obtained from ROurces we to t rehable, but we do not guaranu-e its accuracy Walllton & Co, Inc. Rnd ita officers, dlrl.'('tors or en1J1loyees may have an intere8t In or purchase Rnd sell the securities referred to herein, WNSOl