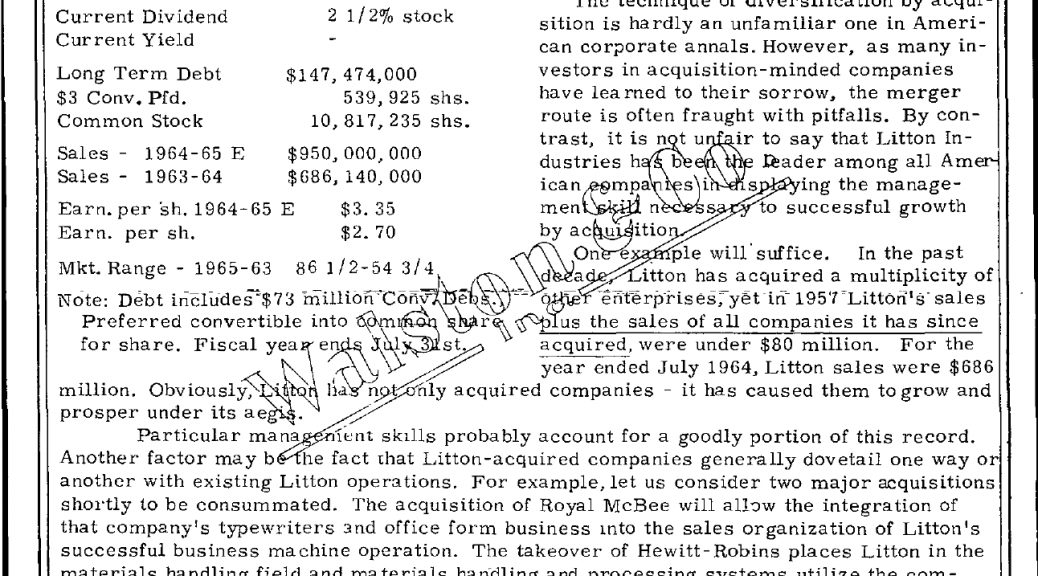 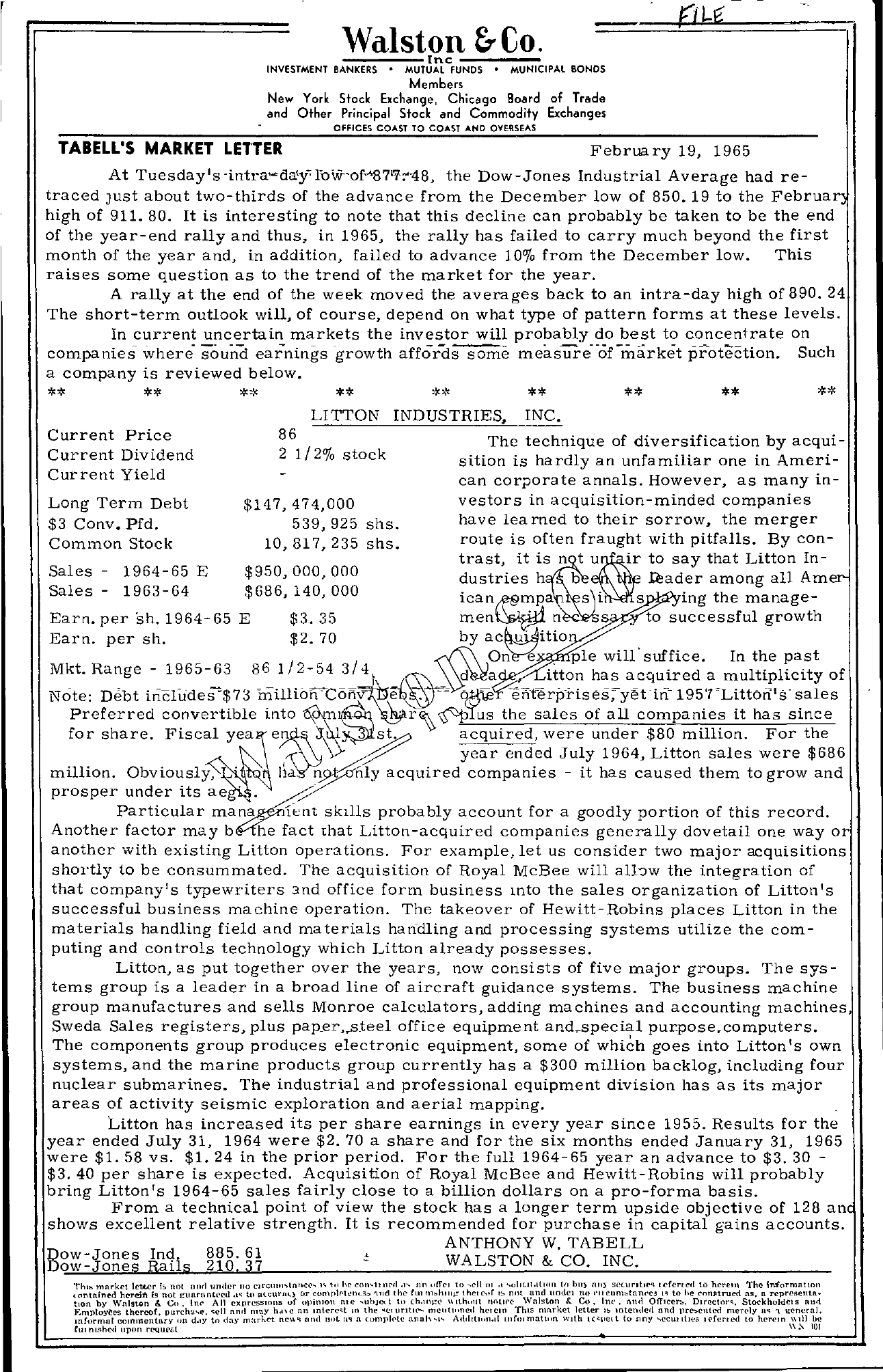 I Walston &Co. (iLf INveSTMENT BANKERS MUTUIAnLcFUNDS MUNICIPAL SONDS Members New York Stock Exchange, Chicago Board of Trade and Other Principal Stock and Commodity Exchanges OFFICES COAST TO COAST AND OVERSEAS lABEll'S MARKET lETTER February 19, 1965 At Tuesday's intra'da'yluw-of'87'''l–48, the Dow-Jones Industrial Average had re- traced Just about two-thirds of the advance from the December low of 850.19 to the Februa high of 911. 80. It is interesting to note that this decline can probably be taken to be the end of the year-end rally and thus, in 1965, the rally has failed to carry much beyond the first month of the year and, in addition, failed to advance 100/0 from the December low. This raises some question as to the trend of the market for the year. A rally at the end of the week moved the averages back to an intra-day high of 890.24 The short-term outlook will, of course, depend on what type of pattern forms at these levels. In current uncertain markets the investor will probably do best to concentrate on companies where sound earnings growth affor-ds some measureaf-market protection. Such a company is reviewed below. LITTON INDUSTRIES, INC. Current Price Current Dividend Current Yield 86 2 1/20/0 stock The technique of diversification by acquisition is hardly an unfamiliar one in American corporate annals. However, as many in- Long Term Debt 147,474,000 vestors in acquisition-minded companies 3 Conv. Pfd. Common Stock 539,925 shs. 10,817,235 shs. have learned to their sorrow, the merger route is often fraught with pitfalls. By con- Sales – 1964-65 E Sales – 1963-64 950,000,000 686, 140, 000 trast, it dustries h to say that Litton Inb reader among all Am s i s ing the manage- Earn. per sh. 1964-65 E 3. 35 n s to successful growth Earn. per sh. 2. 70 Mkt. Range – 1965-63 86 1/2-54 -f'\\by aci'Lu'1Aitio ,on;' pIe will' suffice. In the past itton has acquired a multiplicity of Note Debt iricludeS'73 enteriYiises;'yet iri195'7-Littori'f; sales Preferred convertible into the sales of all companies it has since for share. acquired, were under 80 million. For the ;;. year ended July 1964, Litton sales were 686 million. Obviously,' llag' acquired companies – it has caused them to grow and prosper under its ae Particular mana lent sktlls probably account for a gOOdly portion of this record. Another factor may b he fact that Litton-acquired companies generally dovetail one way or another with existing Litton operations. For example, let us consider two major acquisitions shortly to be consummated. The acquisition of Royal McBee will albw the integration of that company's typewriters 3nd office form business mto the sales organization of Litton's successful business machine operation. The takeover of Hewitt- Robins places Litton in the materials handling field and ma terials handling and processing systems utilize the com- puting and controls technology which Litton already possesses. Litton, as put together over the years, now consists of five major groups. The sys- tems group is a leader in a broad line of aircraft guidance systems. The business machine group manufactures and sells Monroe calculators, adding machines and accounting machines Sweda Sales registers, plus pap.ersteel office equipment andspecial purpose.computers. The components group produces electronic equipment, some of goes into Litton's own systems, and the marine products group currently has a 300 million backlog, including four nuclear submarines. The industrial and professional equipment division has as its major areas of activity seismic exploration and aerial mapping. Litton has increased its per share earnings in every year since 1955. Results for the year ended July 31, 1964 were 2. 70 a share and for the six months ended January 31, 1965 were 1. 58 vs. 1. 24 in the prior period. For the full 1964-65 year an advance to 3.30 3.40 per share is expected. Acquisition of Royal McBee and Hewitt-Robins will probably bring Litton's 1964-65 sales fairly close to a billion dollars on a pro-forma basis. From a technical point of view the stock has a longer term upside objective of 128 an shows excellent relative strength. It is recommended for purchase in capital g'ains accounts. Dow-Jones Ind. 885. 61 Dow-Jones Rails 210.37 ANTHONY W. TABELL WALSTON & CO. INC. Th'h market letter not linn under I1U I' t he Ull ffel to I ., 01,(.11.11'11 to 1m) an) se(.untl(''' ccr, cd to hcrCII\ The informatIOn (lIHnined herein is not to H(CurUO or '1lld the fUllllhlllll- Ihclc.. r 10. lint and lIndcl 110 (I.cum.tan'cs to hc ,ol\J;trued n repr!!1;entn- hon by \VaJ9tQn &. Co. In' All CXIJrCSSlOllS uf opinion !.IC uhJc t tn (h,lIl-' \\ Ithut lIotl(,', \Vnlston &. Co, hI'. 311 QlTlcer. Director. St()('kholdelS nnn F.mpioyl'es thereof. purch\\,,,. nn,lmuy h.ne nil III the mcnhnc, helCIl! fhls mnrkel lettcr!!o Intendcrl and merl'1y 11 'l gl'IICral, mformul cotl'ln1cntllry d.\y to day marhet lind lI)t a (umJlI('tc A,\,lrtln.d IIlfmmatln With to any C('lIlllles .fcned to hercln \\i!l he CUI nighed upon request \\-. 101