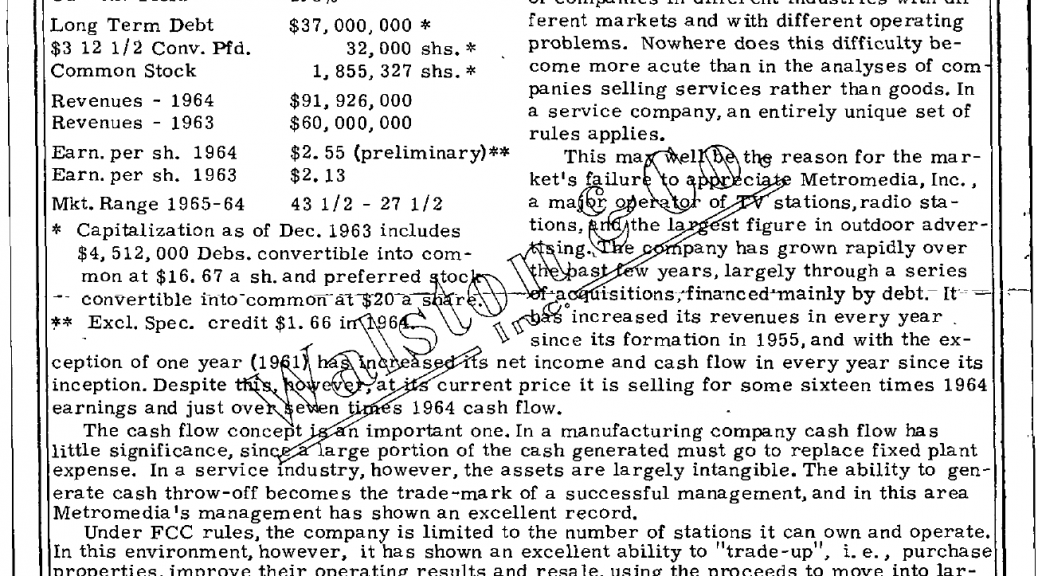 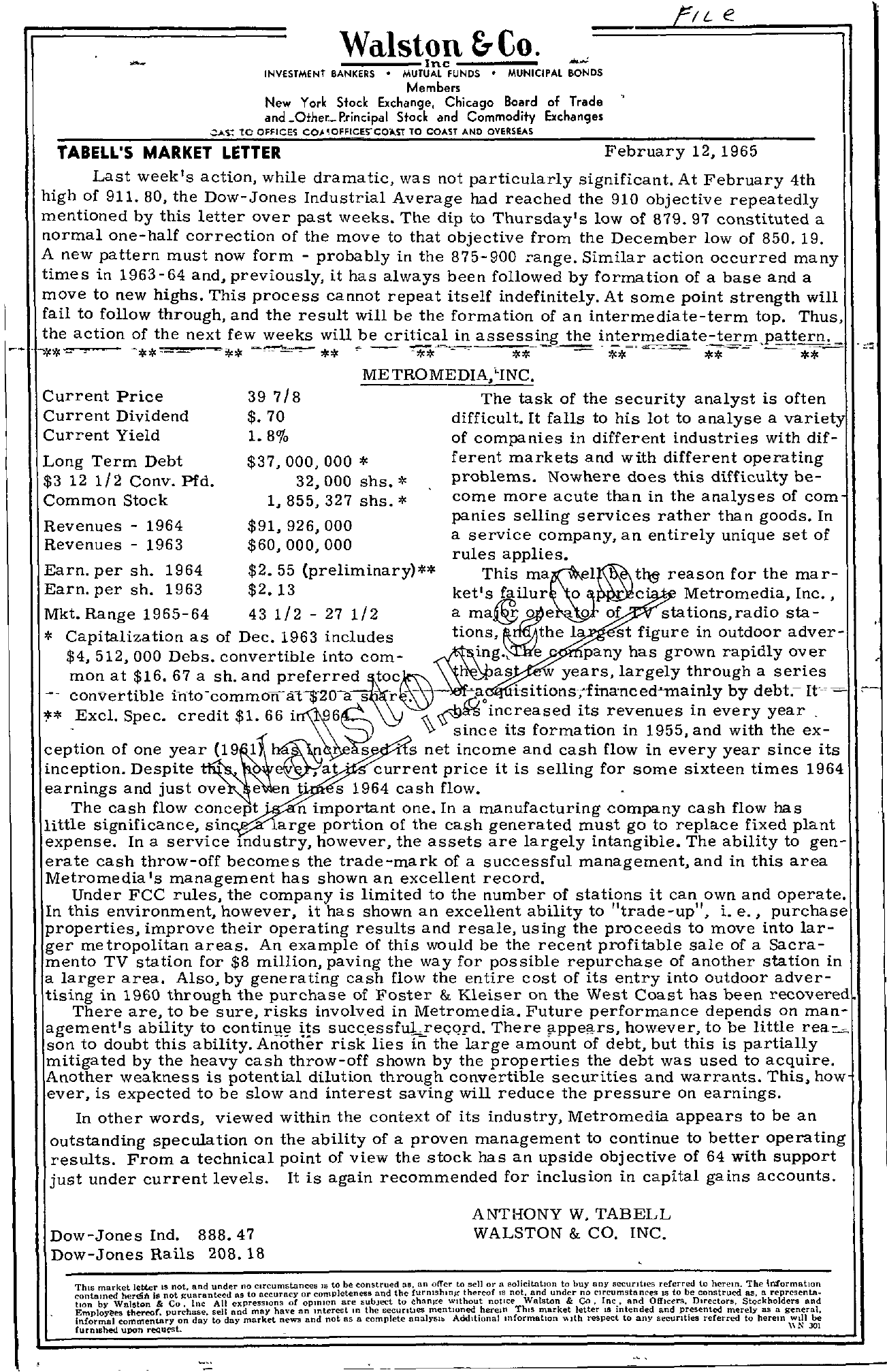 Walston &Co. IL e INVESTMENT BANKERS MUTUAL fUNDS MUNICIPAL BONDS Members New York Stock Exchange, Chicago Board of Trade and OtherP.rincipal Stock and Commodity Exchanges tc OFFICES to COAST AND OVERSEAS TABELL'S MARKET LETTER February 12,1965 Last week's action, while dramatic, was not particularly significant. At February 4th high of 911. 80, the Dow-Jones Industrial Average had reached the 910 objective repeatedly mentioned by this letter over past weeks. The dip to Thursday's low of 879.97 constituted a normal one-half correction of the move to that objective from the December low of 850. 19. A new pattern must now form – probably in the 875-900 range. Similar action occurred many times in 1963 – 64 and, previously, it has always been followed by formation of a base and a move to new highs. This process cannot repeat itself indefinitely. At some point strength will fail to follow through, and the result will be the formation of an intermediate-term top. Thus, the action of the next few weeks will be critical in assessing the intermediate-term pattern. '1 – – ' – — – – – – -0……00- – ME TROMEDIA/INC. Current Price Current Dividend Current Yield 39 7/8 .70 1.80/0 The task of the security analyst is often difficult. It falls to his lot to analyse a variet of companies in different industries with dif- Long Term Debt 3 12 1/2 Conv. pfd. Common Stock Revenues – 1964 Revenues – 1963 37,000,000 32,000 shs. 1,855, 327 shs. 91,926,000 60,000,000 ferent markets and with different operating problems. Nowhere does this difficulty become more acute than in the analyses of com panies selling services rather than goods. In a service company, an entirely unique set of rules applies. Earn. per sh. 1964 2.55 (preliminary) This reason for the mar- Earn. per sh. 1963 2.13 ket's failur 0 Metromedia, Inc., Mkt. Range 1965-64 43 1/2 – 27 1/2 a 0 of stations,radio sta- Capitalization as of Dec. 1963 includes tios, la st figure in outd.oor adver- 4,512,000 Debs. convertible into com- pany has grown rapldly over mon at 16.67 a sh. and preferred convertible – as years, largely through a series isitions;financed'mainly by debt.- It ' Excl. Spec. credit 1. 66 – increased its revenues in every year \\. since its formation in 1955, and with the ex- ception of one inception. Despite 1 S S net income and cash flow in every year since its current price it is selling for some sixteen times 1964 earnings and just ove e n t s 1964 cash flow. The cash flow concept' n important one. In a manufacturing company cash flow has little significance, sin arge portion of the cash generated must go to replace fixed plant expense. In a service wdustry, however, the assets are largely intangible. The ability to gen- erate cash throw-off becomes the trade-mark of a successful management, and in this area Metromedia's management has shown an excellent record. Under FCC rules, the company is limited to the number of stations it can own and operate. In this environment, however, it has shown an excellent ability to trade-up, i. e., purchase properties, improve their operating results and resale, using the proceeds to move into lar- ger metropolitan areas. An example of this would be the recent profitable sale of a Sacra- mento TV station for 8 million, paving the way for possible repurchase of another station in a larger area. Also, by generating cash flow the entire cost of its entry into outdoor adver- tising in 1960 through the purchase of Foster & Kleiser on the West Coast has been recovered There are, to be sure, risks involved in Metromedia. Future performance depends on man- agement's ability to Us successfuLFecQ,d. There f-ppegrs, however, to be little rea- son to doubt this ability. Another risk lies in the large amount of debt, but this is partially mitigated by the heavy cash throw-off shown by the properties the debt was used to acquire. Another weakness is potential dilution through convertible securities and warrants. This, how ever, is expected to be slow and interest saving will reduce the pressure on earnings. In other words, viewed within the context of its industry, Metromedia appears to be an outstanding speculation On the ability of a proven management to continue to better operating results. From a technical point of view the stock has an upside objective of 64 with support just under current levels. It is again recommended for inclusion in capital gains accounts. Dow-Jones Ind. 888.47 Dow-Jones Rails 208.18 ANTHONY W. TABELL WALSTON & CO. INC. ThIS market i(!ttcr IS not. and under 1'10 Circumstances II, to be construed (1S, aD offer to sell or Il solicitatiOn to l.uy any securIties referred to herein. The tnformahon contamed hereA is not guaranteedns to necurncy or completeness and the furmshlIl).! thereof 1I! not, and under no CIrcumstances IS to be construed as, a representa. tlon by Waleton & Co, Inc All expreSSIons of OPiniOn are subject to chnn)!e WIthout notice Walston & Co, Inc. and OffICers, DIrectors, Stockholders and EmployOes then!O(, purchase, sell nnd may ha\'e nn mterest In the seCUrities mentioned .hereln ThiS market letter IS mtended and presented merely as a general, informal commentary on day to day mnrket neW!! and not as a complete annlysill mformatlon respect to any securities referred to herem WI!! be furnIshed upon reQuest. \\ N J01