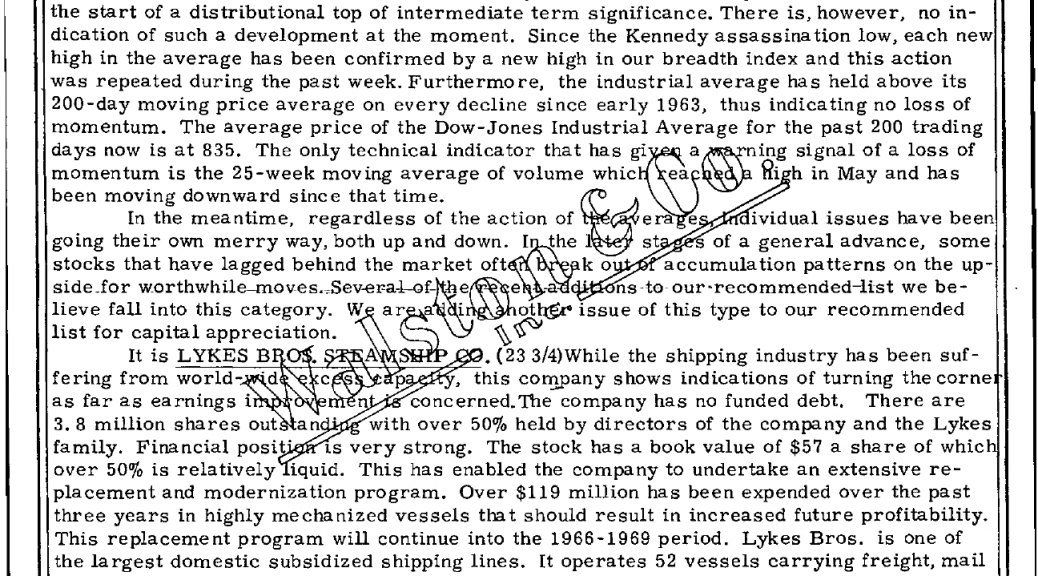 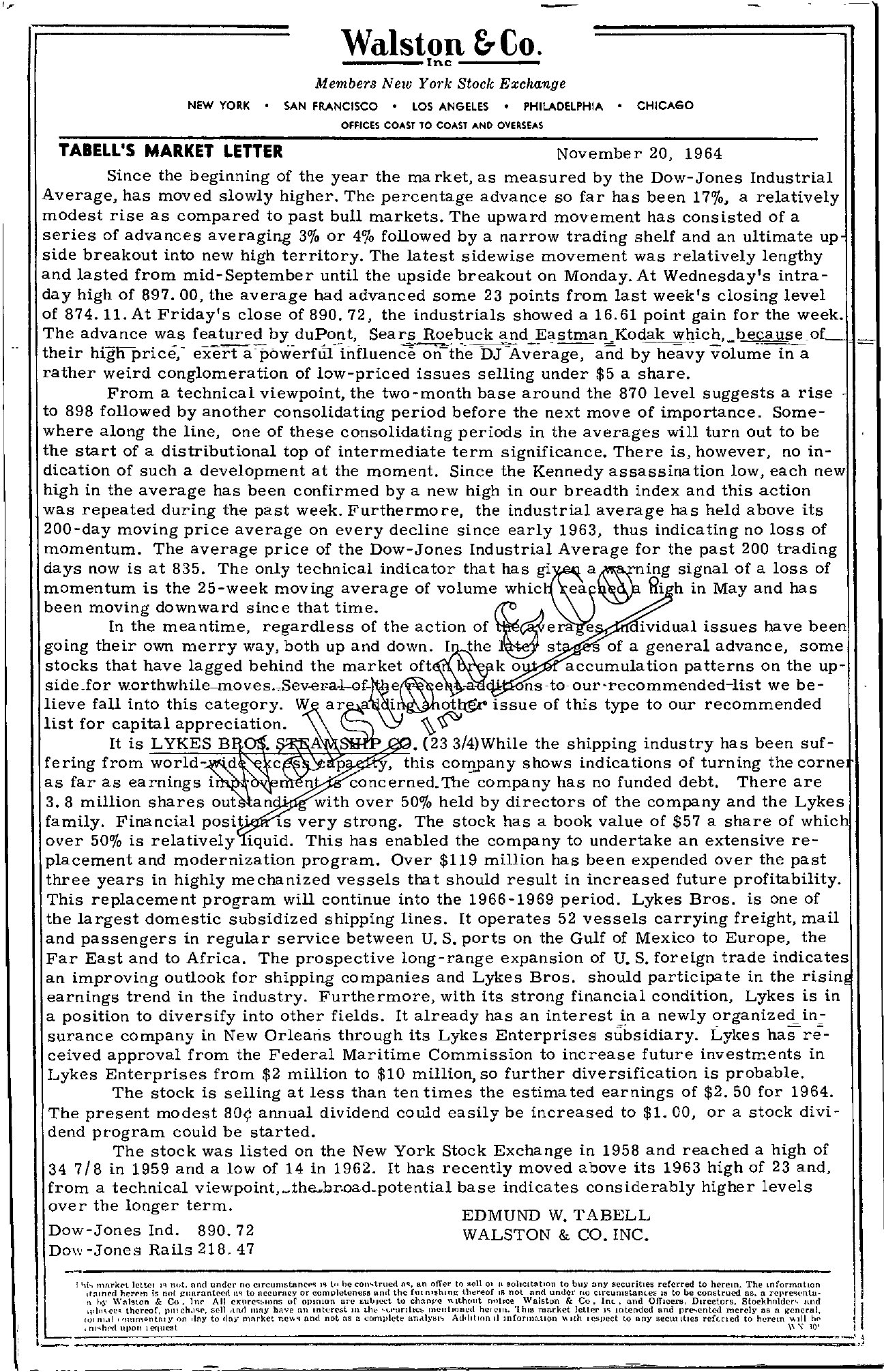 Walston &Co. Members New YOk Stock Exc/w,nge NEW YORK SAN FRANCISCO LOS ANGELES PHILADELPHIA CHICAGO OFFICES COAST TO COAST AND OVERSEAS lABEll'S MARKET lEnER November 20, 1964 Since the beginning of the year the ma rket, as measured by the Dow-Jones Industrial Average, has moved slowly higher. The percentage advance so far has been 17, a relatively modest rise as compared to past bull markets. The upward movement has consisted of a series of advances averaging 3 or 4 followed by a narrow trading shelf and an ultimate up side breakout into new high territory. The latest sidewise movement was relatively lengthy and lasted from mid-September until the upside breakout on Monday. At Wednesday's intra- day high of 897.00, the average had advanced some 23 points from last week's closing level of 874.11. At Friday's close of 890. 72, the industrials showed a 16.61 point gain for the week. The advance was featured by duPont, Sears Roebuck and Eastman.Kodak wl!ich,becauseof their higllprice,- exert bJ-A;erage, by heavy volurri'e in a rather weird conglomeration of low-priced issues selling under 5 a share. From a technical viewpoint, the two-month base around the 870 level suggests a rise to 898 followed by another consolidating period before the next move of importance. Some- where along the line, one of these consolidating periods in the averages will turn out to be the start of a distributional top of intermediate term significance. There is, however, no in- dication of such a development at the moment. Since the Kennedy assassina tion low, each new high in the average has been confirmed by a new high in our breadth index and this action was repeated during the past week. Furthermore, the industrial average has held above its 200-day moving price average on every decline since early 1963, thus indicating no loss of momentum. The average price of the Dow-Jones Industrial Average for the past 200 trading days now is at 835. The only technical indicator that has afflning signal of a loss of momentum is the 25-week moving average of volume whic ea Ri h in May and has been moving downward since that time. In the meantime, regardless of the action of era e ividual issues have been going their own merry way, both up and 1 st of a general advance, some stocks that have lagged behind the market oft k a accumulation patterns on the up- side.for a '. nstoourrecommended-list we be- lieve fall into this category. W issue of this type to our recommended list for capital appreciation. It is LYKES B PI. (23 3/4)While the shipping industry has been suf- fering from world- 'd this cOIlPany shows indications of turning the corne as far as earnings i n concerned.The company has no funded debt. There are 3.8 million shares out an with over 50 held by directors of the company and the Lykes family. Financial posit 1S very strong. The stock has a book value of 57 a share of whic over 50 is relatively iquid. This has enabled the company to undertake an extensive re- placement and modernization program. Over 119 million has been expended over the past three years in highly mechanized vessels tha t should result in increased future profitability. This replacement program will continue into the 1966-1969 period. Lykes Bros. is one of the largest domestic subsidized shipping lines. It operates 52 vessels carrying freight, mail and passengers in regular service between U. S. ports on the Gulf of Mexico to Europe, the Far East and to Africa. The prospective long-range expansion of U. S. foreign trade indicates an improving outlook for shipping companies and Lykes Bros. should participate in the risin earnings trend in the industry. Furthermore, with its strong financial condition, Lykes is in a position to diversify into other fields. It already has an interest in a newly organized surance company in New Orlearis through its Lykes Enterprises subsidiary. Lykes hasre- ceived approval from the Federal Maritime Commission to increase future investments in Lykes Enterprises from 2 million to 10 million, so further diversification is probable. The stock is selling at less than ten times the estima ted earnings of 2. 50 for 1964. The present modest 80 annual dividend could easily be increased to 1. 00, or a stock divi- dend program could be started. The stock was listed on the New York Stock Exchange in 1958 and reached a high of 347/8 in 1959 and a low of 14 in 1962. It has recently moved above its 1963 high of 23 and, from a technical viewpoint,the.,br.oad.potential base indicates considerably higher levels over the longer term. Dow-Jones Ind. 890.72 Dow-Jones Rails 218. 47 EDMUND W. T ABELL WALSTON & CO. INC. ! mnrk't Jette! lIt. and under no t l1e contruca n'l, an offer to !lell 01 U sohcltatlOn to buy any securities referred to herem. The Jnformntlon ,famed hcrpm is not gUllrantccd to IICCliracy or cOfllllleleness unrl the ell! lllereof III nOl nnd under 110 clrcumstBntes 15 to be construed ns. a rel'rc'I('nlu- n by \\'Il1'3ton & Co. 11\(' All of opinIOn lire suhJcct to chanve \\Ithollt nntJce \Vnlston &. Co. Int. nnd Officers. Directors, llUd I thereof. 1111Ich.l'1'. sell ,Inri lIlay have (In IIIt,-,rcilt m tht (ollll.1I '''lIHn''lltlllY on day to rillY nlnrkct And not as a ,fllhf'flltllOIl lequcst .. mentlOlIcd hel'IIl. lhls market 1; Intendcd and pre-.cntcd mere!' as n generlll, unah'III' AddItIon II mformll11on 'Jth t('SjJcct to IIny seem Itles reitrlcd to herem '111 h.. \\ '\ 10' 1—