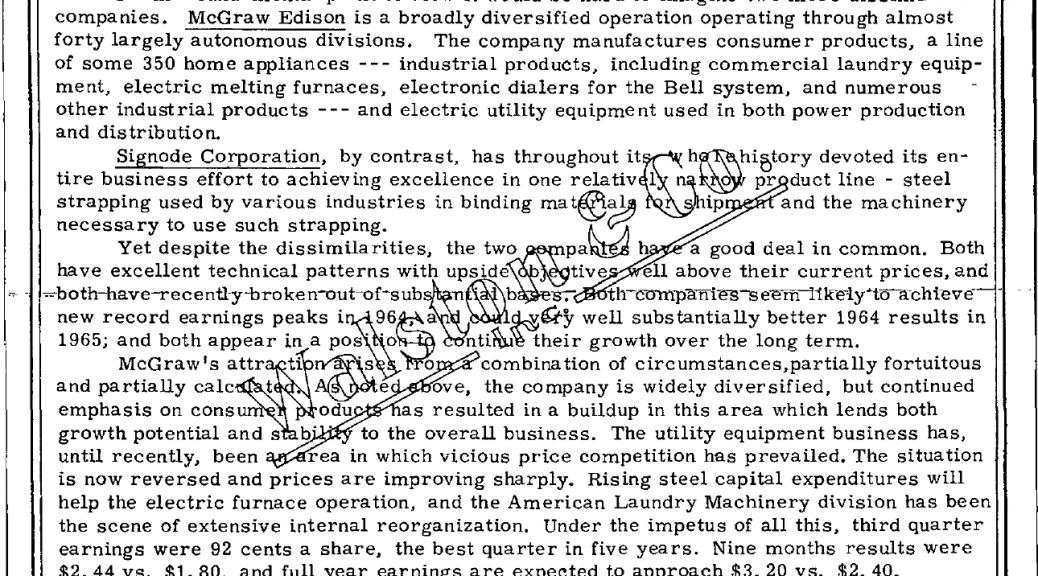 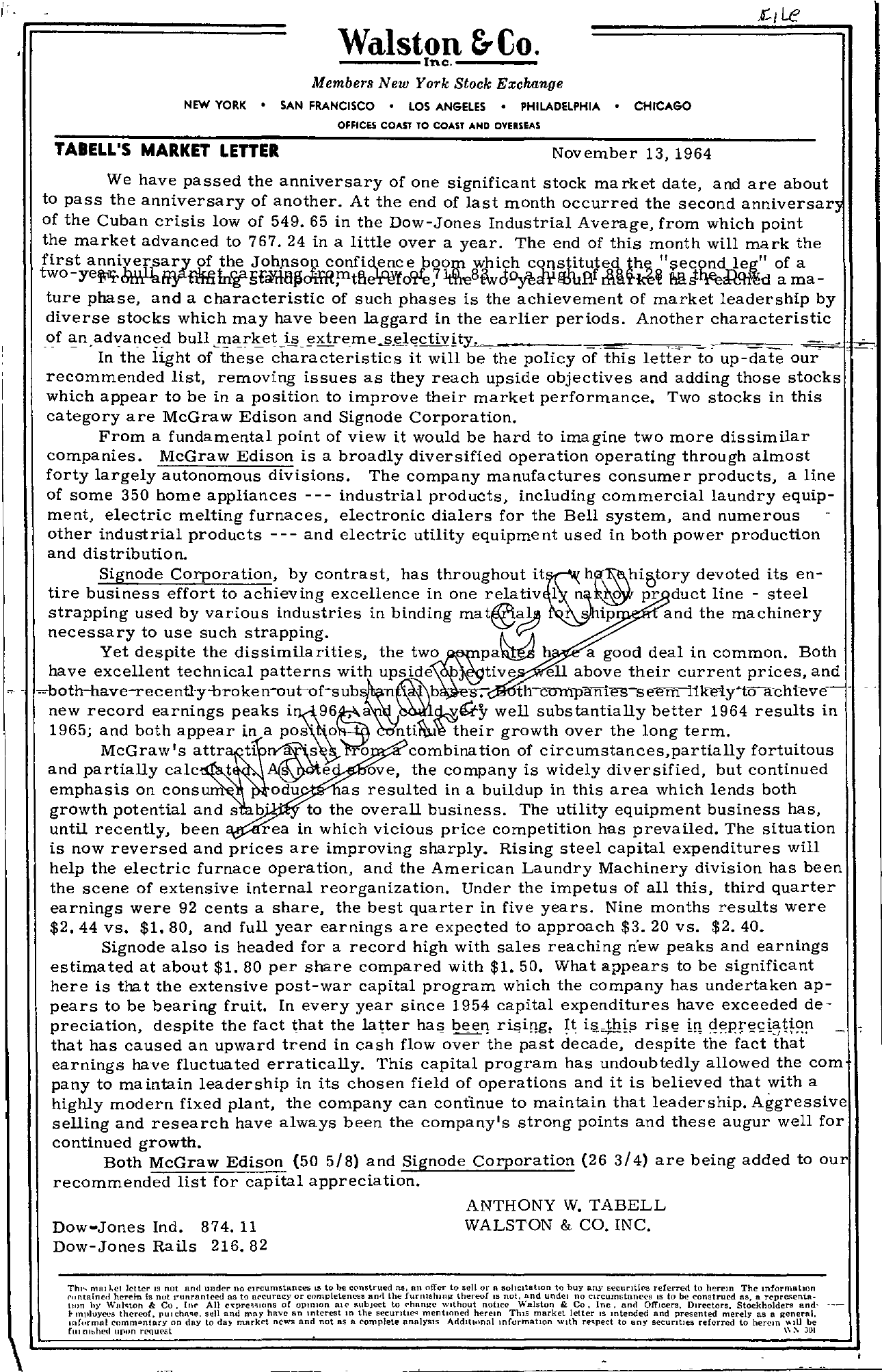 I'' . rr Walston &- Co. Members New York Stock Exchange NEW YORK SAN FRANCISCO LOS ANGELES PHILADELPHIA CHICAGO OFFICES COAST TO COAST AND OVERSEAS TABELL'S MARKET LEnER November 13,1964 We have passed the anniversary of one significant stock ma rket date, and are about to pass the anniversary of another. At the end of last month occurred the second anniversar of the Cuban crisis low of 549. 65 in the Dow-Jones Industrial Average, from which point the market advanced to 767.24 in a little over a year. The end of this month will mark the first of the Joh.nsop 0p.o,7;W which cqrjstituted th\; ;;ec\nd.)eg of a a ma- ture phase, and a characteristic of such phases is the achievement of market leadership by diverse stocks which may have been laggard in the earlier periods. Another characteristic of bull .. . In the light of these characteristics it will be the policy of this letter to up-date our recommended list, removing issues as they reach upside objectives and adding those stocks which appear to be in a position to improve their market performance. Two stocks in this category are McGraw Edison and Signode Corporation. From a fundamental point of view it would be hard to imagine two more dissimilar companies. McGraw Edison is a broadly diversified operation operating through almost forty largely autonomous divisions. The company manufactures consumer products, a line of some 350 home appliances — industrial products, including commercial laundry equip- ment, electric melting furnaces, electronic dialers for the Bell system, and numerous other industrial products — and electric utility equipment used in both power production and dis tributio n. Signode Corporation, by contrast, has throughout devoted its en- tire business effort to achieving excellence in one relativ 1 n pr duct line – steel strapping used by various industries in binding necessary to use such strapping. 1\ V;\ ip and the machinery Yet despite the dissimilarities, the h a good deal in common. Both have excellent technical patterns with tive ell their current 8- th-COmparfle-S-setm111ke1ytoachreve new record earnings peaks well substantially better 1964 results in 1965; and both appear in a pos' '0 their growth over the long term. McGraw's ti ro combination of circumstances,partially fortuitous and partially calc t ove, the company is widely diversified, but continued emphasis on consu odu as resulted in a buildup in this area which lends both growth potential and s b' to the overall business. The utility equipment business has, until recently, been rea in which vicious price competition has prevailed. The situation is now reversed and prices are improving sharply. Rising steel capital expenditures will help the electric furnace operation, and the American Laundry Machinery division has been the scene of extensive internal reorganization. Under the impetus of all this, third quarter earnings were 92 cents a share, the best quarter in five years. Nine months results were 2.44 vs. 1.80, and full year earnings are expected to approach 3. 20 vs. 2.40. Signode also is headed for a record high with sales reaching new peaks and earnings estimated at about 1. 80 per share compared with 1. 50. What appears to be significant here is tha t the extensive post-war capital program which the company has undertaken ap- pears to be bearing fruit. In every year since 1954 capital expenditures have exceeded de- preciation' despite the fact that the latter bElel) It in that has caused an upward trend in cash flow over the past decade, despite the fact that earnings have fluctuated erratically. This capital program has undoubtedly allowed the com pany to maintain leadership in its chosen field of operations and it is believed that with a highly modern fixed plant, the company can continue to maintain that leadership. Aggressive selling and research have always been the company's strong pOints and these augur well for continued growth. Both McGraw Edison (50 5/8) and Signode Corporation (26 3/4) are being added to our recommended list for capital appreciation. Dow-Jones Ind. 874.11 Dow-Jones Rails 216.82 ANTHONY W. TABELL WALSTON & CO. INC. Thl mill J..cl letter IS not nnd under no CIrcumstances 15 to be construed AS, An nITer to sell or R soilCltatlOn to buy any SeC\lrltirs referred to herem The lnformatlon rntained herein is nut 1unrantc-ed as to a('curncy or ant the furnlshmg thereof IS not, nnd undel no circumstances IS to be construed as a reprCentn- lIOn hy \'/ll..ton & Cu, In(' All or opmlOn aI(' lIubJect to Without notice ,'alston & Co, Inc, and Officers, Dneetors, and- .. ITIll)UYe\.';'I thereof, Illilchn'le, sell and mny have an mtercst In the seCUrltw mentioned herem ThiS market letter IS mtended and presented merely as a general, 1Il..rmal commontary on dllY to du) market neWS and not as a complete nnnl)'sls Additional mformatJon With re..pect to nny SeCUrities referred to herem …. 111 be (UI mlhed llllHn re-quest \\-. 301