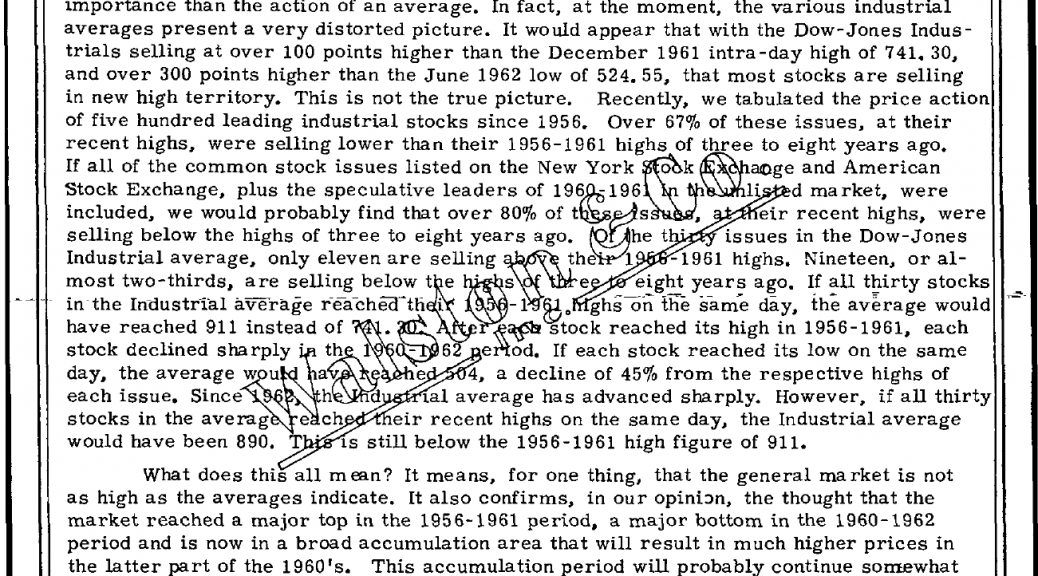 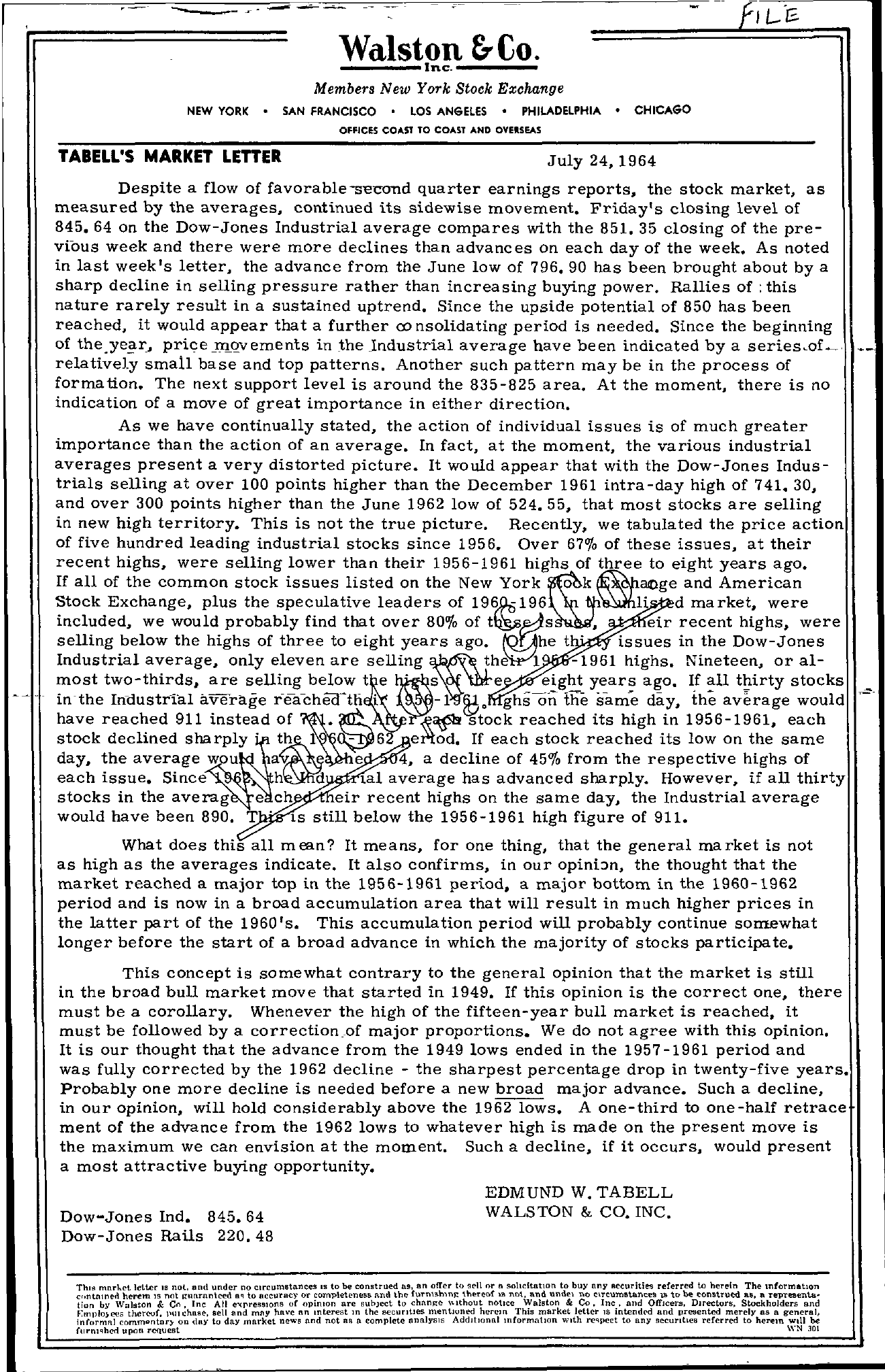 . . – – — –..-;.- —– – . Walston &- Co. Members New York Stock Exchange NEW YORK SAN FRANCISCO LOS ANGELES PHILADELPHIA CHICAGO OFFICES COAST TO COAST AND OVERSEAS TABELL'S MARKET LEnER July 24,1964 Despite a flow of favorable-s-econd quarter earnings reports, the stock market, as measured by the averages, continued its sidewise movement. Friday's closing level of 845.64 on the Dow-Jones Industrial average compares with the 851. 35 closing of the pre- vious week and there were more declines than advances on each day of the week. As noted in last week's letter, the advance from the June low of 796.90 has been brought about by a sharp decline in selling pressure rather than increasing buying power. Rallies of this nature rarely result in a sustained uptrend. Since the upside potential of 850 has been reached, it would appear that a further consolidating period is needed. Since the beginning of the.ye3lr, price ll.Qvements in the Jndustrial average have been indicated by a relativel.y small base and top patterns. Another such pattern may be in the process of forma tion. The next support level is around the 835-825 area. At the moment, there is no indication of a move of great importance in either direction. As we have continually stated, the action of individual issues is of much greater importance than the action of an average. In fact, at the moment, the various industrial averages present a very distorted picture. It would appear that with the Dow-Jones Indus- trials selling at over 100 points higher than the December 1961 intra-day high of 741.30, and over 300 points higher than the June 1962 low of 524.55, that most stocks are selling in new high territory. This is not the true picture. Recently, we tabulated the price action of five hundred leading industrial stocks since 1956. Over 67 of these issues, at their recent highs, were selling lower than their 1956-1961 highs of three to eight years ago. If all of the common stock issues listed on the New York Stock Exchange, plus the speculative leaders of 19!W6196 and American d market, were included, we would probably find that over 80 of , eir recent highs, were selling below the highs of three to eight years ago. to!'Jhe t issues in the Dow-Jones Industrial average, only eleven are selling -1961 highs. Nineteen, or al- most two-thirds, are selling below in the Inaustrfal average r'ea-chenli i e eight years ago. If all t!J.irty stocks -1 ghson the same day, the average would have reached 911 instead of stock reached its high in 1956-1961, each stock declined ei'lod. If each stock reached its low on the same day, the average wou each issue. Since a h a e 4, a decline of 45 from the respective highs of 1al average has advanced sharply. However, if all thirty stocks in the averag e ch eir recent highs on the same day, the Industrial average would have been 890. T 1S still below the 1956-1961 high figure of 911. What does this all mean It means, for one thing, that the general ma rket is not as high as the averages indicate. It also confirms, in our opinin, the thought that the market reached a major top in the 1956-1961 period, a major bottom in the 1960-1962 period and is now in a broad accumulation area that will result in much higher prices in the latter part of the 1960's. This accumulation period will probably continue somewhat longer before the start of a broad advance in which the majority of stocks participate. This concept is somewhat contrary to the general opinion that the market is still in the broad bull market move that started in 1949. If this opinion is the correct one, there must be a corollary. Whenever the high of the fifteen-year bull market is reached, it must be followed by a correction.of major proportions. We do not agree with this opinion. It is our thought that the advance from the 1949 lows ended in the 1957-1961 period and was fully corrected by the 1962 decline – the sharpest percentage drop in twenty-five years. Probably one more decline is needed before a new broad major advance. Such a decline, in our opinion, will hold considerably above the 1962 lows. A one-third to one-half retrace ment of the advance from the 1962 lows to whatever high is made on the present move is the maximum we can envision at the moment. Such a decline, if it occurs, would present a most attractive buying opportunity. Dow-Jones Ind. 845.64 Dow-Jones Rails 220.48 EDMUND W. TABELL WALSTON & CO. INC. ThiS mnrh.et letter IS not, lind under no circumstances IS to be construed as, an ofTer to SE'lI or n solicitatiOn to buy any Recurities referred to herein The information ntmnen herem IS not Illnrantced to accuracy or comp!.eteness and the fUTntBtnn, thereof lS not, and unde1 no clrcumatances 18 to be construed 8a, a rep-resenta tiun by Walston & Co, Inc All e'l(presslOns of opimon are suhJcct to chan!'!!! \qthout notice \yalston & Co, Inc.' and OffICers, DIrectors, Stockholders and thereof, I'ul chllse-, sell and may bll\'c nn anterest 10 the securItIes mentIOned hereIn ThiS market letter 18 mtcrld('d and presented merely as a general, informal comm..ntar.j. on dny to day market news and not 08 a complete Ilnalysls AddItIonal informatIOn With reqpect to any securltleB referred to herein be furmqhC'cl upon rcquC!st \\ N 301