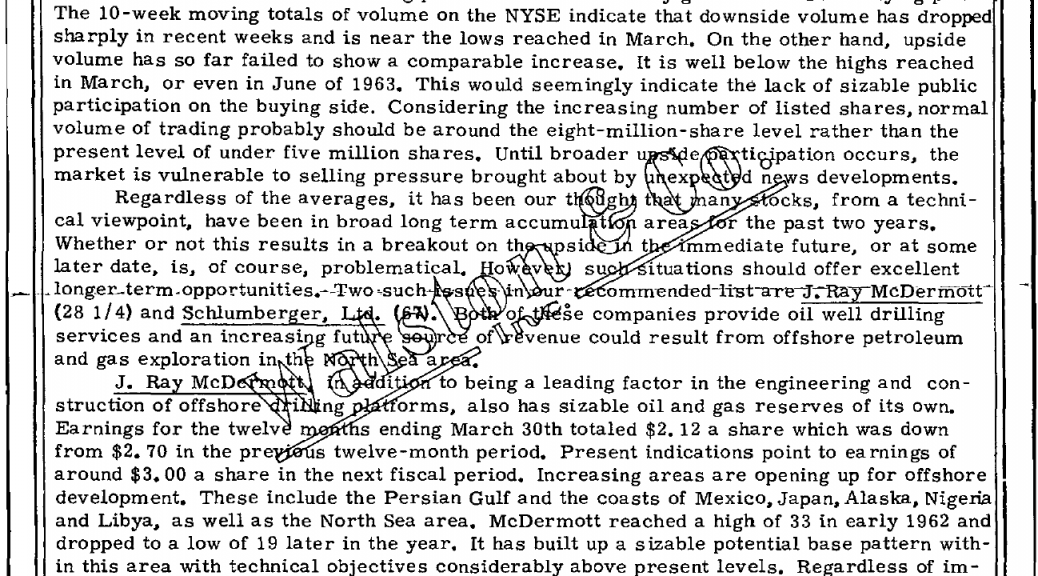 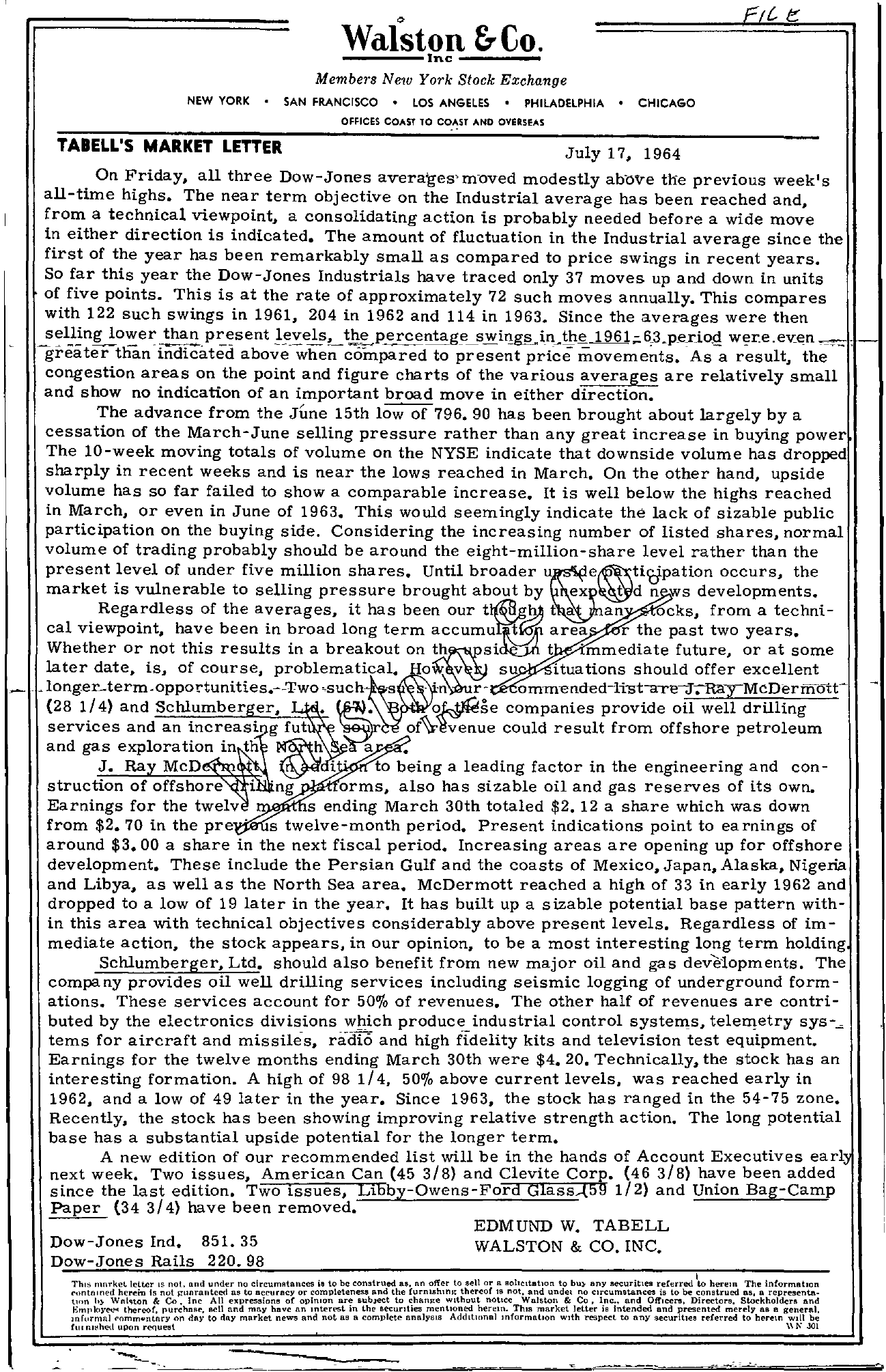 Walston &Co. —–Inc —– Members New York Stock Exchange NEW YORK SAN FRANCISCO LOS ANGELES PHILADELPHIA CHICAGO OFFICES COAST TO COAST AND OVERSEAS TABELL'S MARKET LETTER July 17, 1964 On Friday, all three Dow-Jones avera'ges'm-oved modestly above the previous week's all-time highs. The near term objective on the Industrial average has been reached and, from a technical viewpoint, a consolidating action is probably needed before a wide move in either direction is indicated. The amount of fluctuation in the Industrial average since the first of the year has been remarkably small as compared to price swings in recent years. So far this year the Dow-Jones Industrials have traced only 37 moves up and down in units of five points. This is at the rate of approximately 72 such moves annually. This compares with 122 such swings in 1961, 204 in 1962 and 114 in 1963. Since the averages were then greater than indicated above when the compared to present price mo19v6e1m;.e6nc3t.ps..e,dAos9a result, the congestion areas on the point and figure charts of the various averages are relatively small and show no indication of an important broad move in either direction. The advance from the June 15th low of 796. 90 has been brought about largely by a cessation of the March-June selling pressure rather than any great increase in buying power The 10-week moving totals of volume on the NYSE indicate that downside volume has dropped sharply in recent weeks and is near the lows reached in March. On the other hand, upside volume has so far failed to show a comparable increase. It is well below the highs reached in March, or even in June of 1963. This would seemingly indicate the lack of sizable public participation on the buying side. Considering the increasing number of listed shares, normal volume of trading probably should be around the eight-million-share level rather than the present level of under five million shares. Until broader occurs, the market is vulnerable to selling pressure brought about by ex n INS developments. Regardless of the averages, it has been our t a an ocks, from a techni- cal viewpoint, have been in broad long term area r the past two years. Whether or not this results in a breakout on t mmediate future, or at some later date, is, of o. v su should offer excellent. . long.er-term.opportumttes.–Two ,such -s . -n r- o mTIlended-bst-aTeJ' RayMcDermOlt (28 1/4) and Schlumber er, oJ..tMse companies provide oil well drilling services and an increasi g fut could result from offshore petroleum and gas exploration in th a J. Ra McD i to being a leading factor in the engineering and con- orms, also has sizable oil and gas reserves of its own. Earnings for the twelv s ending March 30th totaled 2.12 a share which was down from 2.70 in the pre' s twelve-month period. Present indications point to earnings of around 3.00 a share in the next fiscal period. Increasing areas are opening up for offshore development. These include the Persian Gulf and the coasts of Mexico, Japan, Alaska, Nigeria and Libya, as well as the North Sea area. McDermott reached a high of 33 in early 1962 and dropped to a low of 19 later in the year. It has built up a sizable potential base pattern with- in this area with technical objectives considerably above present levels. Regardless of im- mediate action, the stock appears, in our opinion, to be a most interesting long term holding Schlumberger, Ltd. should also benefit from new major oil and gas developments. The company provides oil well drilling services including seismic logging of underground form- ations. These services account for 50 of revenues. The other half of revenues are contri- buted by the electronics divisions which industrial control systems, telelI!etry tems for aircraft and missiles, radio and high fidelity kits and television test equipment. Earnings for the twelve months ending March 30th were 4. 20. Technically, the stock has an interesting formation. A high of 981/4, 50 above current levels, was reached early in 1962, and a low of 49 later in the year. Since 1963, the stock has ranged in the 54-75 zone. Recently, the stock has been showing improving relative strength action. The long potential base has a substantial upside potential for the longer term. A new edition of our recommended list will be in the hands of Account Executives earl next week. Two issues, American Can (45 3/8) and Clevite Corp. (46 3/8) have been added since the last edition. Two issues, Libby-Owens-Ford Glass(59 1/2) and Union Bag-Camp Paper (34 3/4) have been removed. Dow-Jones Ind. 851. 35 Dow-Jones Rails 220.98 EDMUND W. TABELL WALSTON & CO. INC. ThIS mnrket Idwr LS nOI. and under no elrcumRtnnces is to be eonstrued as. nn after to sell or a Boh(';ltBtlOn to bu) any !leeuritleH reCl!rred Ito herem The information contamed herem Is not guaranteed as to BCcUrncy or completeness and the !urnlshml! therco! IS not, and undel no circumstances is to be as, a representa- tH.n h & Co Inc All el'pressione of opinion are subJect to ehanJ!e Without notice Walston & Co, Inc., and Officers, Directors. Stockholders and thereot, sell and may have an Interest in the lIecurlties mentlOned herem. ThiS market Jetter is intended and presented merely 8S 8 general. mformal f'omm ..ntnry 6n day to dny market news and not as II. complete annlysis AdditIOnal mformatlon WIth respect to any securltlee referred to herem WIll be hu IIpon request \\ r.; J01