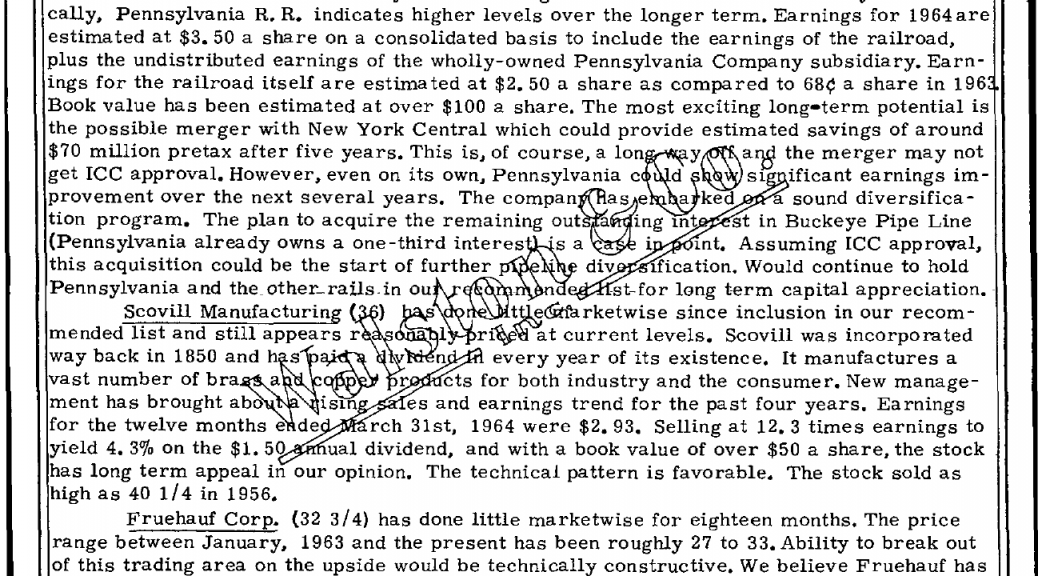 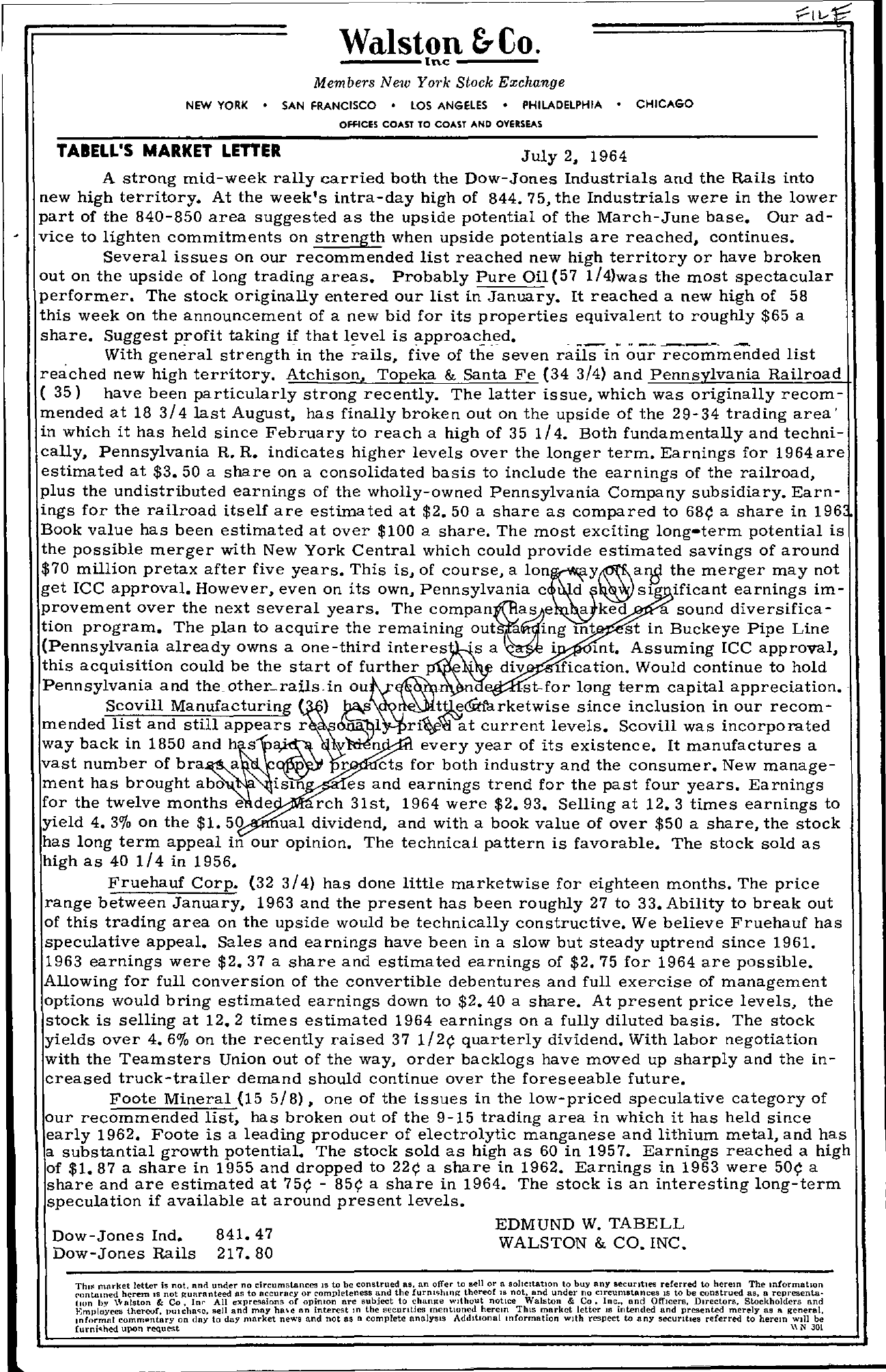 Walston &Co. Inc Members New YOTk Stock Exchange NEW YORK SAN FRANCISCO lOS ANGELES PHILADELPHIA CHICAGO OFFICES COAST TO COAST AND OVERSEAS TABELL'S MARKET LmER July 2, 1964 A strong mid-week rally carried both the Dow-Jones Industrials and the Rails into new high territory. At the week's intra-day high of 844.75, the Industrials were in the lower part of the 840-850 area suggested as the upside potential of the March-June base. Our ad- vice to lighten commitments on strength when upside potentials are reached, continues. Several issues on our recommended list reached new high territory or have broken out on the upside of long trading areas. Probably Pure Oil(57 1/4)was the most spectacular performer. The stock originally entered our list in January. It reached a new high of 58 this week on the announcement of a new bid for its properties equivalent to roughly 65 a share. Suggest profit taking if that is approached. With general strength in the rails, five of the seven rails in our recommended list reached new high territory. Atchison, Topeka & Santa Fe (34 3/4) and Pennsvlvania Railroad ( 35) have been particularly strong recently. The latter issue, which was originally recom- mended at 18 3/4 last August, has finally broken out on the upside of the 29-34 trading area' in which it has held since February to reach a high of 351/4. Both fundamentally and techni- cally, Pennsylvania R. R. indicates higher levels over the longer term. Earnings for 1964are estimated at 3.50 a share on a consolidated basis to include the earnings of the railroad, plus the undistributed earnings of the wholly-owned Pennsylvania Company subsidiary. Earn- ings for the railroad itself are estima ted at 2.50 a share as compared to 68 a share in 196, Book value has been estimated at over 100 a share. The most exciting long-term potential is the possible merger with New York Central which could provide estimated savings of around 70 million pretax after five years. This is, of course, a the merger may not get ICC approval. However, even on its own, Pennsylvania c d ificant earnings im- provement over the next several years. The e a ked a sound diversifica- tion program. The plan to acquire the remaining ing lOt st in Buckeye Pipe Line (Pennsylvania already owns a one-third 's a i lOt. Assuming ICC approval, this acquisition could be the start of further 'div lfication. Would continue to hold Pennsylvania and theother.railsin long term capital appreciation.- Scovill Manufacturing mended list and still appears r I since inclusion in our recomcurrent levels. Scovill was incorporated way back in 1850 s vast number of bra a 1 ' n every year of its existence. It manufactures a r cts for both industry and the consumer. New manage- ment has brought abo ism es and earnings trend for the past four years. Earnings for the twelve months e de rch 31st, 1964 were 2.93. Selling at 12.3 times earnings to it'yield 4.30/0 on the 1. 50 ual dividend, and with a book value of over 50 a share, the stock has long term appeal our opinion. The technical pattern is favorable. The stock sold as high as 40114 in 1956. Fruehauf Corp. (32 3/4) has done little marketwise for eighteen months. The price range between January, 1963 and the present has been roughly 27 to 33. Ability to break out of this trading area on the upside would be technically constructive. We believe Fruehauf has speculative appeal. Sales and earnings have been in a slow but steady uptrend since 1961. 1963 earnings were 2.37 a share and estimated earnings of 2.75 for 1964 are possible. Allowing for full conversion of the convertible debentures and full exercise of management options would bring estimated earnings down to 2.40 a share. At present price levels, the stock is selling at 12.2 times estimated 1964 earnings on a fully diluted basis. The stock yields over 4.60/0 on the recently raised 37 1/2 quarterly dividend. With labor negotiation with the Teamsters Union out of the way, order backlogs have moved up sharply and the in- creased truck-trailer demand should continue over the foreseeable future. Foote Mineral (155/8), one of the issues in the low-priced speculative category of our recommended list, has broken out of the 9-15 trading area in which it has held since early 1962. Foote is a leading producer of electrolytic manganese and lithium metal, and has a substantial growth potential. The stock sold as high as 60 in 1957. Earnings reached a high of 1.87 a share in 1955 and dropped to 22 a share in 1962. Earnings in 1963 were 50 a share and are estimated at 75 – 85 a share in 1964. The stock is an interesting long-term speculation if available at around present levels. Dow-Jones Ind. 841. 47 Dow-Jones Rails 217. 80 EDMUND W. TABELL WALSTON & CO. INC. Thill mnrket letter is not. and under no eircumstances IS to be construed as. an offer to sell or n soitcltatlOn to buy any SecUrities referred to herein The information ('ontnlIled herem IS not gunrnnteed 8S to nccuracy or completeness and the furnl9hlng thereof 18 not. and under no circumstances IS to be construed as, a representa- tIOn by \'alston & Co In,. All expressions of opinion arc subject to chanJ!;e Without notice Walston & Co. Inc., and Officers, Directors, Stockholders and thereof, sell Bnd may ha\e an In the securities mentlUned herem ThiS letter IS intended and presented merely us a general, Infflrmal comm..ntnry on day to day market news nnd not as a complete analYSIS Adthtlonal mformatlOn With respect to any securities referred to herem Will be furnio;hed upon request \\ N 301 I