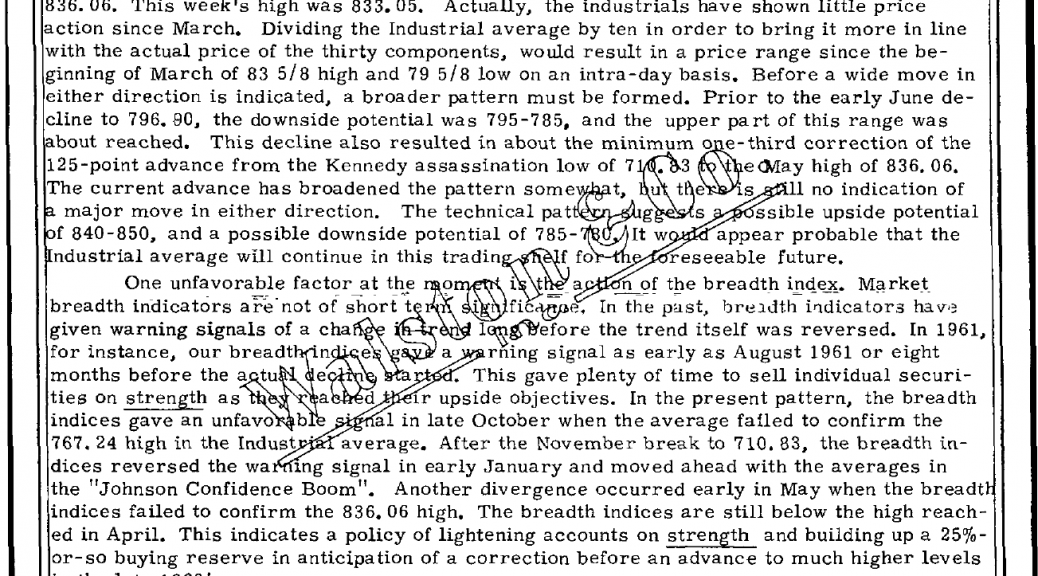 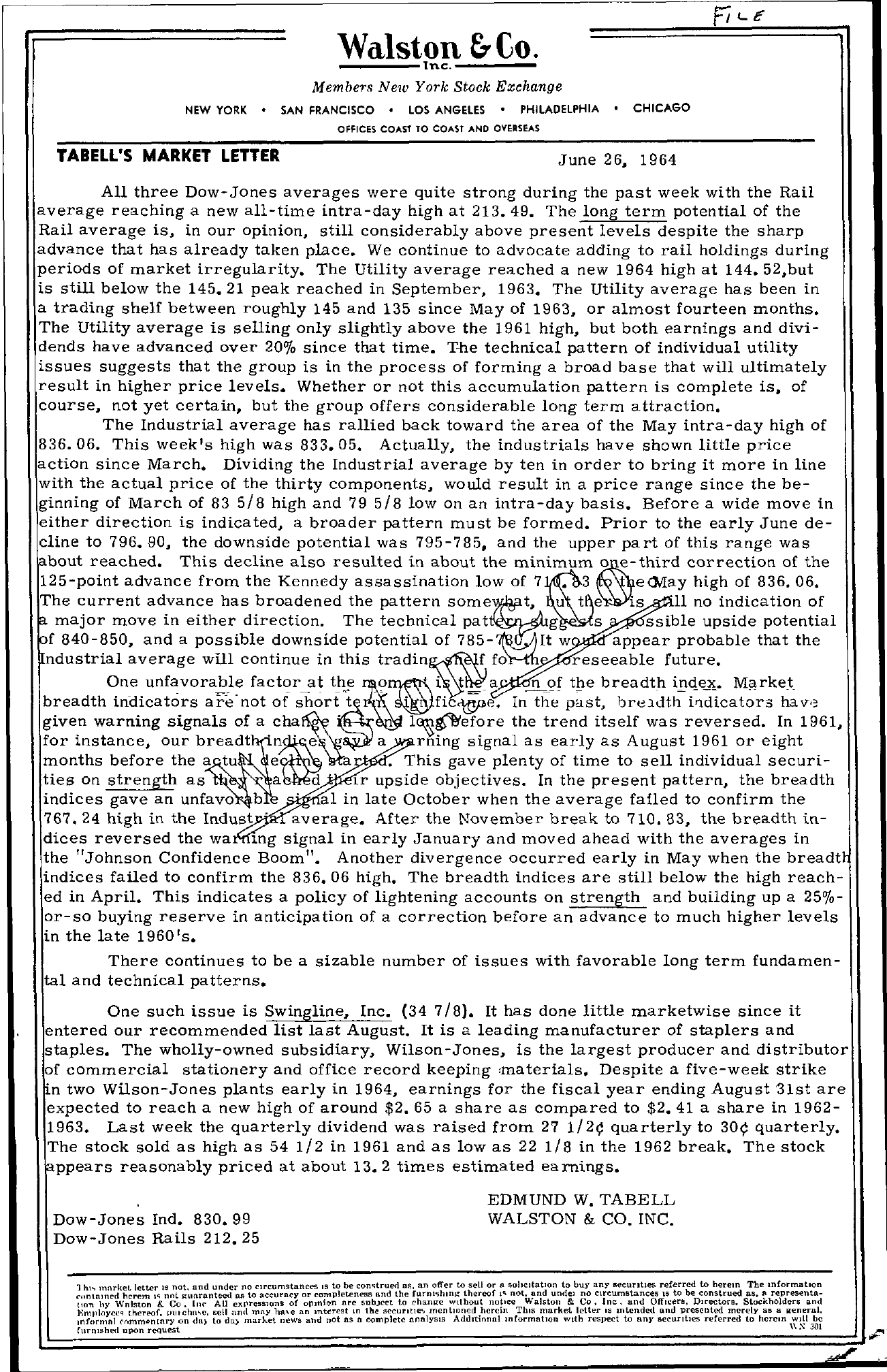 Walston &Co ….. Inc….. Member.. New York Stock Exchange NEW YORK SAN FRANCISCO LOS ANGELES PHILADELPHIA CHICAGO OFFICES COAST TO COAST AND OVERSEAS TABELL'S MARKET LETTER June 26, 1964 All three Dow-Jones averages were quite strong during the past week with the Rail average reaching a newall-time intra-day high at 213.49. The long term potential of the Rail average is, in our opinion, still considerably above present levels despite the sharp advance that has already taken place. We continue to advocate adding to rail holdings during periods of market irregularity. The Utility average reached a new 1964 high at 144. 52,but is still below the 145.21 peak reached in September, 1963. The Utility average has been in a trading shelf between roughly 145 and 135 since May of 1963, or almost fourteen months. The Utility average is selling only slightly above the 1961 high, but both earnings and divi- dends have advanced over 200/0 since that time. The technical pattern of individual utility issues suggests that the group is in the process of forming a broad base that will ultimately result in higher price levels. Whether or not this accumulation pattern is complete is, of course, not yet certain, but the group offers considerable long term attraction. The Industrial average has rallied back toward the area of the May intra-day high of 836.06. This week's high was 833.05. Actually, the industrials have shown little price action since March. Dividing the Industrial average by ten in order to bring it more in line with the actual price of the thirty components, would result in a price range since the be- ginning of March of 83 5/8 high and 79 5/8 low on an intra-day basis. Before a wide move in either direction is indicated, a broader pattern must be formed. Prior to the early June de- cline to 796.90, the downside potential was 795-785, and the upper part of this range was bout reached. This decline also resulted in about the correction of the 125-point advance from the Kennedy assassination low of eMay high of 836.06. The current advance has broadened the pattern u t e 1S 11 no indication of major move in either direction. The technical pat gs ssible upside potential f 840-850, and a possible downside potential of 785-7(1t0'.;\U w appear probable that the ndustrial average will continue in this fo)th reseeable future. One unfavorable factor at the n of the breadth index. Market breadth indicators are' not of In p;st, hav given warning signals of a the trend itself was reversed. In 1961, for instance, our breadt .nS)e a rning signal as early as August 1961 or eight months before the a tu e a . This gave plenty of time to sell individual securi- ties on strength as a d 1r upside objectives. In the present pattern, the breadth indices gave an unfavo al in late October when the average failed to confirm the 767.24 high in the Indust average. After the November break to 710.83, the breadth in- dices reversed the wa mg signal in early January and moved ahead with the averages in the Johnson Confidence Boom. Another divergence occurred early in May when the breadt indices failed to confirm the 836.06 high. The breadth indices are still below the high reach- ed in April. This indicates a policy of lightening accounts on strength and building up a 250/0- or-so buying reserve in anticipation of a correction before an advance to much higher levels in the late 1960's. There continues to be a sizable number of issues with favorable long term fundamental and technical patterns. One such issue is Swingline, Inc. (34 7/8). It has done little marketwise since it entered our recommended list last August. It is a leading manufacturer of staplers and staples. The wholly-owned subsidiary, Wilson-Jones, is the largest producer and distributor of commercial stationery and office record keeping 'materials. Despite a five-week strike 'n two Wilson-Jones plants early in 1964, earnings for the fiscal year ending August '31st are expected to reach a new high of around 2.65 a share as compared to 2.41 a share in 19621963. Last week the quarterly dividend was raised from 27 1/2 quarterly to 30 quarterly. The stock sold as high as 54 1/2 in 1961 and as low as 22 1/8 in the 1962 break. The stock ppears reasonably priced at about 13.2 times estimated earnings. Dow-Jones Ind. 830.99 Dow-Jones Rails 212.25 EDMUND W. TABELL WALSTON & CO. INC. 1 IS not, and no circumstances IS to be aI;, an offer to sell or Il solicitation to buy any lIeCUrities referred to herem The mformatlOn ('ntalned herem nnt !'unranteed as to accuracy or completeness and the fUrnl;hlll!' thereof I not, !lnd undCI no circumstances 19 to be construed as, a representa- (Hill hy \Vnlston &. Co, In( All eXll1'CSSlons of opmion are sub)cet to change Without Walston & Co, Inc, and Officers, Dlreetore. Stockholders and thereof. sell lInd may ha\c an mtcrest In the mentlOned.hereln ThiS market letter IS lntended and presented merely as a general, Informal ('(,mmontary on da) to da) market news and not as a complete analySIS AdditIOnal mformatlOn With respect to any secunt1es referred to herem will be