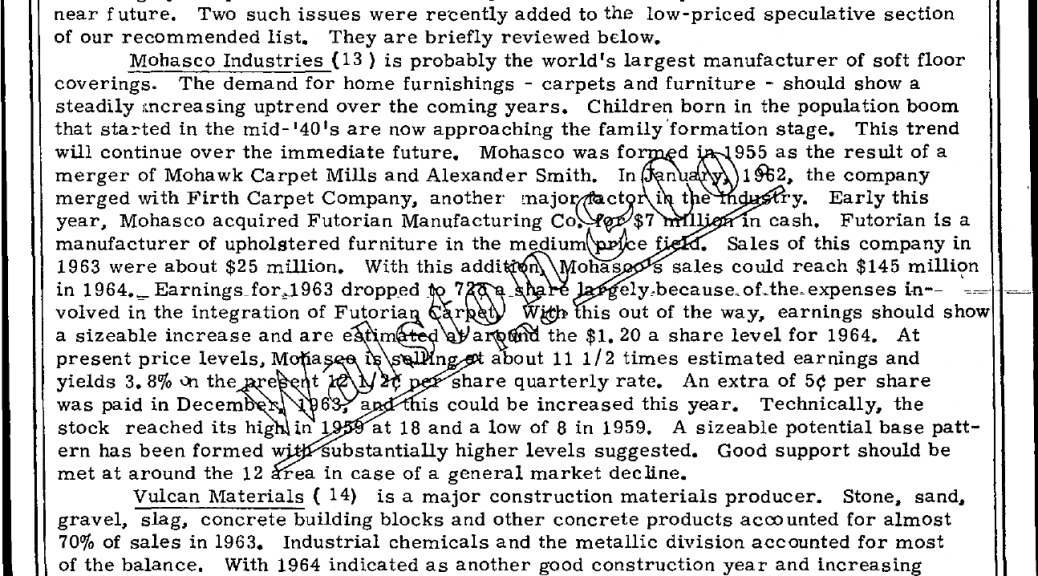 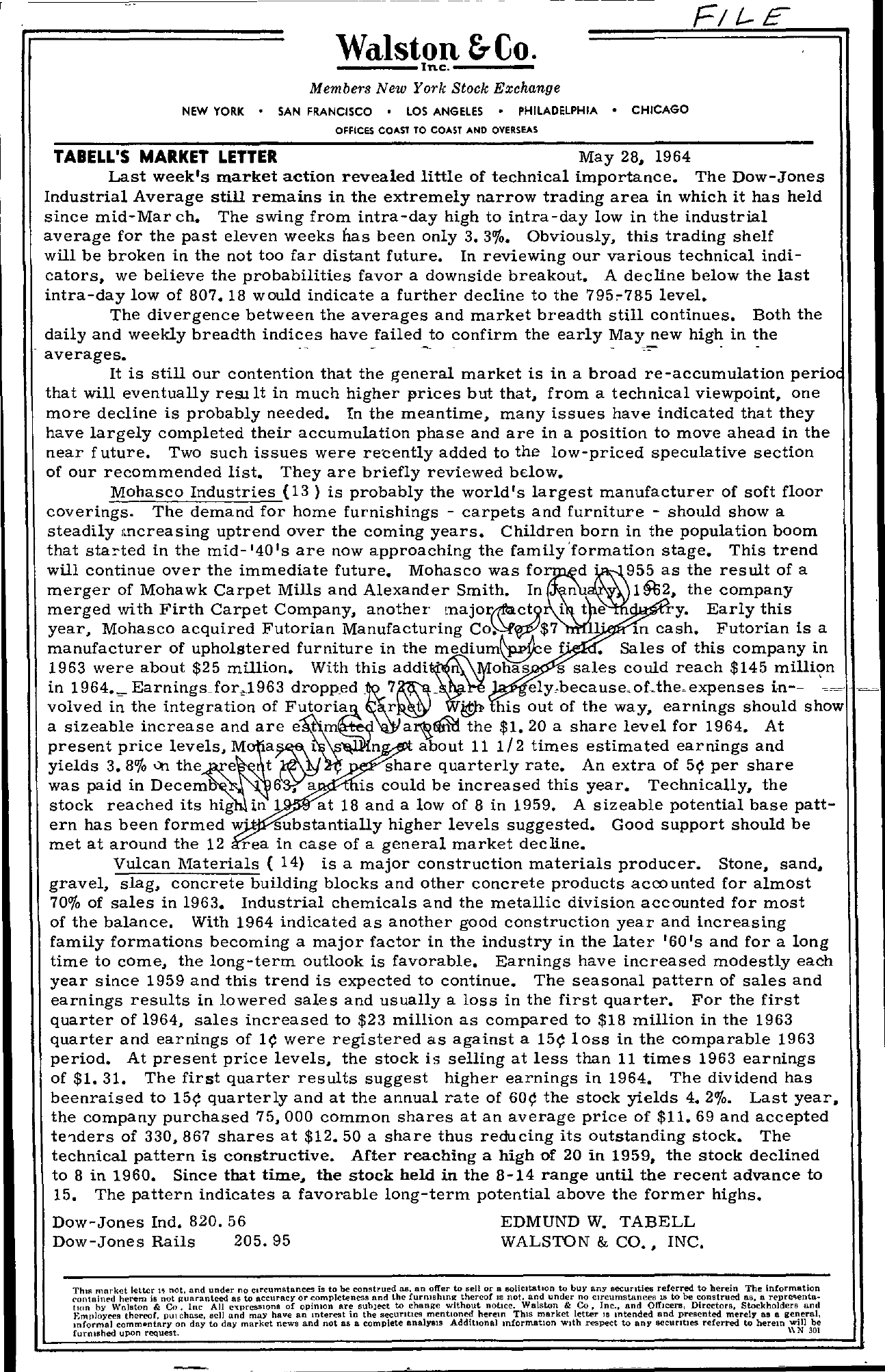 — Walston &Co. Inc. F/L-E Members New York Stock Exchange NEW YORK SAN FRANCISCO LOS ANGELES PHILADELPHIA CHICAGO OFfiCES COAST TO COAST AND OVERSEAS TABELL'S MARKET LEnER May 28. 1964 Last week's market action revealed little of technical importance. The Dow-Jones Industrial Average still remains in the extremely narrow trading area in which it has held since mid-Mar ch. The swing from intra-day high to intra-day low in the industrial average for the past eleven weeks has been only 3.3. Obviously, this trading shelf will be broken in the not too far distant future. In reviewing our various technical indi- cators, we believe the probabilities favor a downside breakout. A decline below the last intra-day low of 807.18 would indicate a further decline to the level. The divergence between the averages and market breadth still continues. Both the daily and weekly breadth indices have failed to confirm the early May new high in the averages. – —'- It is still our contention that the general market is in a broad re-accumulation perio that will eventually rewlt in much higher prices but that. from a technical viewpoint, one more decline is probably needed. rn the meantime, many issues have indicated that they have largely completed their accumulation phase and are in a position to move ahead in the near future. Two such issues were re'cently added to the low-priced speculative section of our recommended list. They are briefly reviewed bElow. Mohasco Industries (13) is probably the world's largest manufacturer of soft floor coverings, The demand for home furnishings – carpets and furniture – should show a steadily mcreasing uptrend over the coming years. Children born in the population boom that sta!'ted in the mid-'40's are now approaching the family'formation stage. This trend will continue over the immediate future. Mohasco was as the result of a merger of Mohawk Carpet Mills and Alexander Smith. In n the company merged with Firth Carpet Company, another i te rYe Early this year, Mohasco acquired Futorian Manufacturing '10 cash. Futorian is a manufacturer of upholstered furniture in the f' Sales of this company in 1963 were about 25 million. With this ohas sales could reach 145 millic,m in Earningsfor,,1963 dropped volved in the integration of rRW ilth' his out of the way, earnings in-should show a sizeable increase and are the 1.20 a share level for 1964. At present price M yields 3.8 vn the e t n about 11 1/2 times estimated earnings and share quarterly rate. An extra of 5 per share was paid in Decem 6, a is could be increased this year. Technically, the stock reached its hig in 1 at 18 and a low of 8 in 1959. A sizeable potential base patt- ern has been formed w' substantially higher levels suggested. Good support should be met at around the 12 rea in case of a general market decline. Vulcan Materials (14) is a major construction materials producer. Stone, sand. gravel, slag, concrete building blocks and other concrete products accounted for almost 70 of sales in 1963. Industrial chemicals and the metallic division accounted for most of the balance. With 1964 indicated as another good construction year and increasing family formations becoming a major factor in the industry in the later '60 's and for a long time to come, the long-term outlook is favorable. Earnings have increased mOdestly each year since 1959 and this trend is expected to continue. The seasonal pattern of sales and earnings results in lowered sales and usually a loss in the first quarter. For the first quarter of 1964, sales increased to 23 million as compared to 18 million in the 1963 quarter and earnings of 1 were registered as against a 15 loss in the comparable 1963 period. At present price levels, the stock is selling at less than 11 times 1963 earnings of 1. 31. The first quarter results suggest higher earnings in 1964. The dividend has beenraised to 15 quarterly and at the annual rate of 60 the stock yields 4.2. Last year, the company purchased 75,000 common shares at an average price of 11.69 and accepted te'1ders of 330,867 shares at 12.50 a share thus reducing its outstanding stock. The technical pattern is constructive. After reaching a high of 20 in 1959, the stock declined to 8 in 1960. Since that time. the stock held in the 8-14 range until the recent advance to 15. The pattern indicates a favorable long-term potential above the former highs. Dow-Jones Ind. 820.56 Dow-Jones Rails 205.95 EDMUND W. TABELL WALSTON & CO., INC. morket letter not. and under no cIrcumstances is to be construed os. an offer to sell or a SOliCitation to buy any secuntles referred to herein The information (ontnined herem twn by Walston Is not Ituaranlced as to aCCUraCY & Co, Inc All c(pr(!SBlOns of or completeness and the oplmon subject to furnlshtnlt thereof IS not. and under change without notlce Walston & no Co c . Ircumstanc Inc. and es 18 to Officers be construed . Directors. as. 11 repre'lentaStockholders and t'mployees thereof pUlchase sell and may have an Interest In the securltles mentIOned herem ThIS market letter 16 Intended and presented merely .116 a general, c o m m .. on day to day market news and not as a complete analYSIS AdditlOnal mformatlOn With respect to any securities referred to herem will be urfllshed upon request \\ N 301