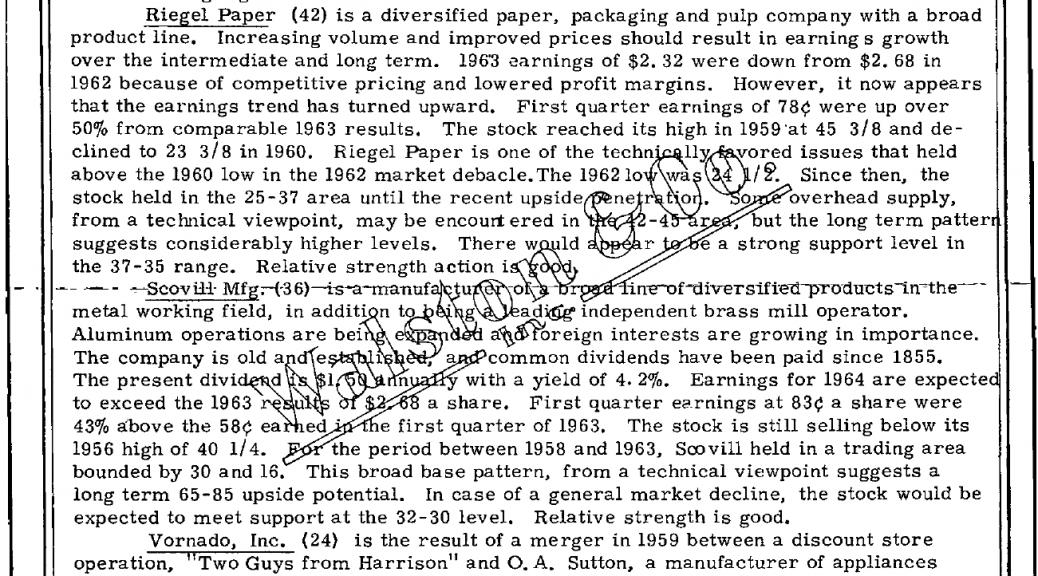 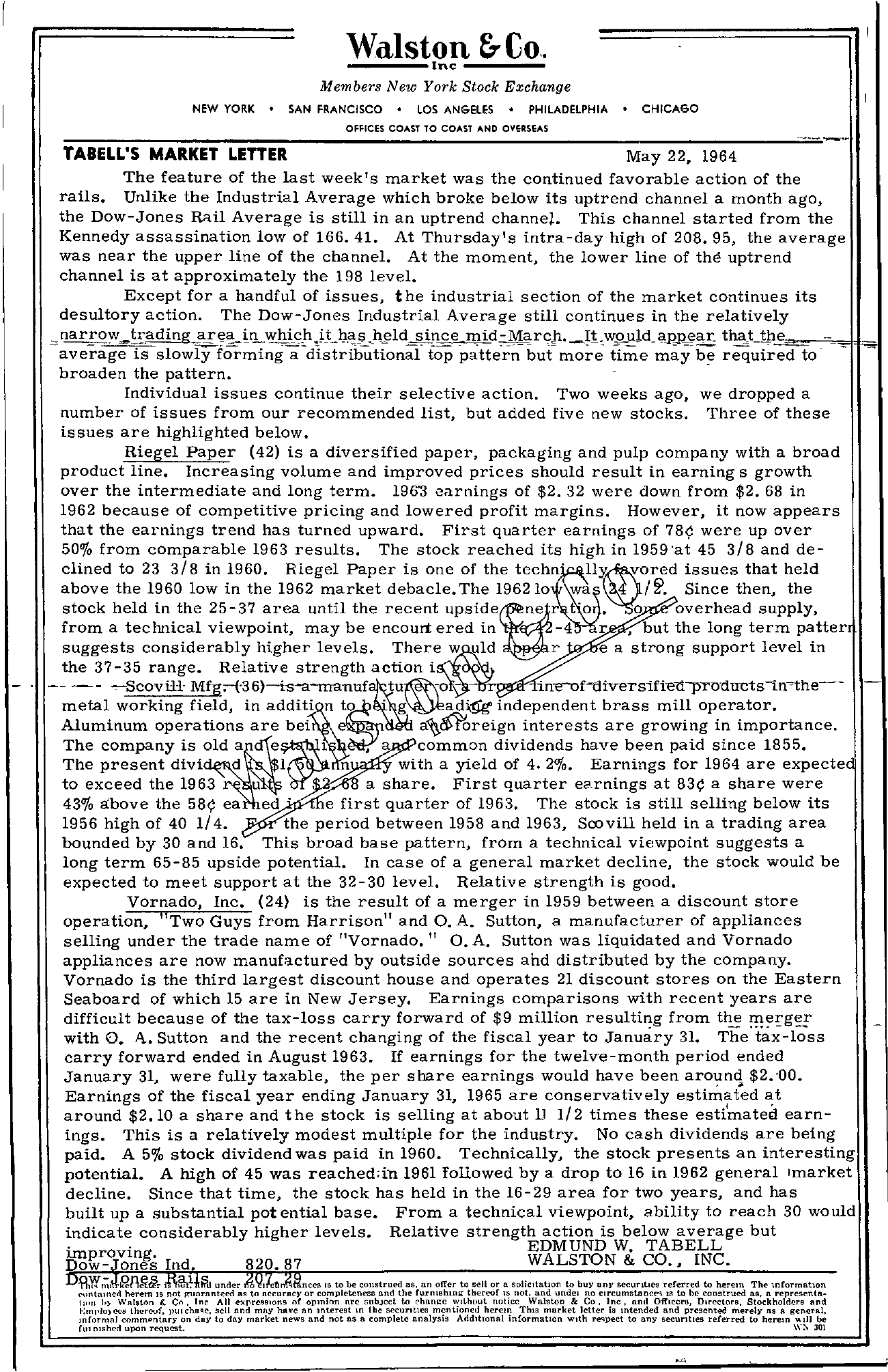 Walston &- Co.. – Inc – – – – – Membe,'s New York Stock Exchange NEW YORK SAN FRANCISCO LOS ANGELES PHILADELPHIA CHICAGO OFFICES COAST TO COAST AND OVERSEAS TABEll'S MARKET lEnER May 22, 1964 The feature of the last week's market was the continued favorable action of the rails. Unlike the Industrial Average which broke below its uptrend channel a month ago, the Dow-Jones Rrtil Average is still in an uptrend channel. This channel started from the Kennedy assassination low of 166.41. At Thursday's intra-day high of 208.95, the average was near the upper line of the channel. At the moment, the lower line of the uptrend channel is at approximately the 198 level. Except for a handful of issues, t he industrial section of the market continues its desultory action. The Dow-Jones Industrial Average still continues in the relatively since mid-average is slowly forming a-distrib-utionaI fop tha.Ube .. moi-e' time maybe requii–ectto' . …..,. broaden the pattern. Individual issues continue their selective action. Two weeks ago, we dropped a number of issues from our recommended list, but added five new stocks. Three of these issues are highlighted below. Riegel Paper (42) is a diversified paper, packaging and pulp company with a broad product line. Increasing volume and improved prices should result in earning s growth over the intermediate and long term. 196'3 earnings of 2.32 were down from 2. 68 in 1962 because of competitive pricing and lowered profit margins, However, it now appears that the earnings trend has turned upward. First quarter earnings of 78 were up over 500/0 from comparable 1963 results. The stock reached its high in 1959'at 45 3/8 and de- clined to 23 3/8 in 1960. Riegel Paper is one of the issues that held above the 1960 low in the 1962 market debacle. The 196210 wa Since then, the stock held in the 25-37 area until the recent uPsideaer t'o. 0 overhead supply, from a technical viewpoint, may be encourt ered in -4 r ,but the long term patter suggests considerably higher levels. r e a strong support level in the 37-35 range. Relative strength action i -. – – Mfg;-'3 metal working field, in n Aluminum operations are bei . g\\)kadi(!j'g' independent brass mill operator. interests are growing in importance, The company is old a ,a common dividends have been paid since 1855. The present divi d I n with a yield of 4.2. Earnings for 1964 are expecte to exceed the 1963 a share. First quarter earnings at 83 a share were 43/0 above the 58 ea ed e first quarter of 1963. The stock is still selling below its 1956 high of 40 1/4. the period between 1958 and 1963, Scovill held in a trading area bounded by 30 and 16. This broad base pattern, from a technical viewpoint suggests a long term 65-85 upside potential. In case of a general market decline, the stock would be expected to meet support at the 32-30 level. Relative strength is good. Vornado, Inc. (24) is the result of a merger in 1959 between a discount store operation, Two Guys from Harrison and O. A. Sutton, a manufacturer of appliances selling under the trade name of Vornado. O. A. Sutton was liquidated and Vornado appliances are now manufactured by outside sources ahd distributed by the company. Vornado is the third largest discount house and operates 21 discount stores on the Eastern Seaboard of which 15 are in New Jersey. Earnings comparisons with recent years are difficult because of the tax-loss carry forward of 9 million resulting from the merger with O. 1\. Sutton and the recent changing of the fiscal year to January 31. The'ia;-l-;ss carry forward ended in August 1963. If earnings for the twelve-month period ended January 31, were fully taxable, the per share earnings would have been arounq 2. '00. Earnings of the fiscal year ending January 31, 1965 are conservatively estimated at around 2.10 a share and t he stock is selling at about lJ 1/2 times these esti'mated earn- ings. This is a relatively modest multiple for the industry. No cash dividends are being paid. A 50/0 stock dividend was paid in 1960. Technically, the stock presents an interesting potential. A high of 45 was reached'ill 1961 followed by a drop to 16 in 1962 general 'market decline. Since that time, the stock has held in the 16-29 area for two years, and has built up a substantial pot ential base. From a technical viewpoint, ability to reach 30 would indicate considerably higher levels. Relative strength action is below average but EDMUND W. TABELL WALSTON & CO., INC. 0 I eft nces IS to be construed as, an offer to sell or a soliCitation to buy any secuTltJes referred to herem The 1nformation C'untmncd herem IS not Jnmrnntced as to accuracy or completeness and the furnlshmJ thereof IS not, and undel no circumstance-; IS to be construed 8S, a rcpresent8- lum h Walston & Co, Inc All expressions of opmion nrc subJect to chnnl!e Without notice Walston & Co, Inc, and Officers, Directors. Stockholders and thcreof, pUlchlllC, sell and mllY have an Interest m the securities mentioned herem ThiS market letter is mtended and presented merely as 11 general, mformal commntary on dny to day market news and not as a complete analysis AdditIOnal information With re;pect to any securities referred to herein be fUI nlshed upon 301