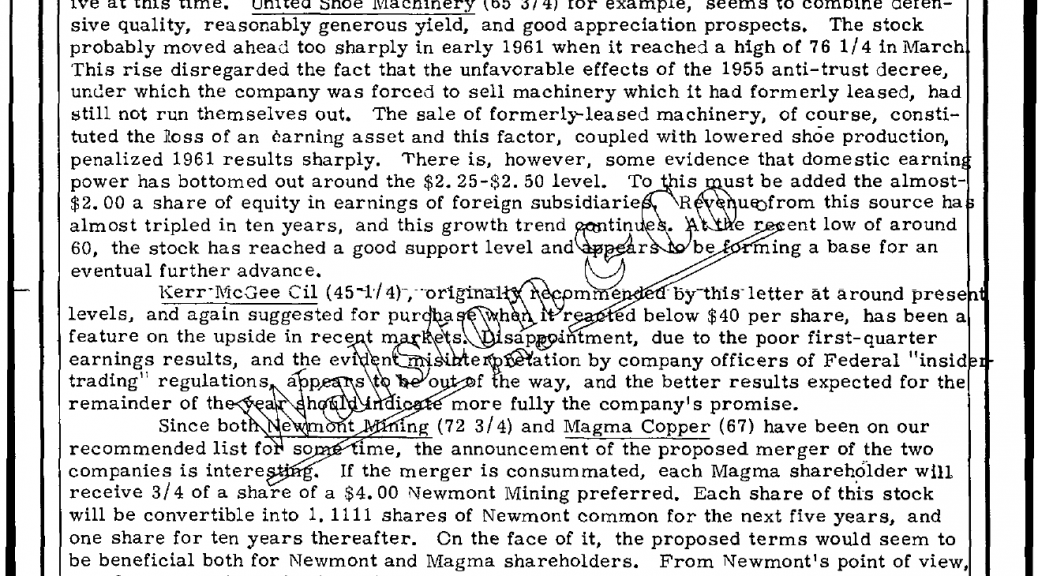 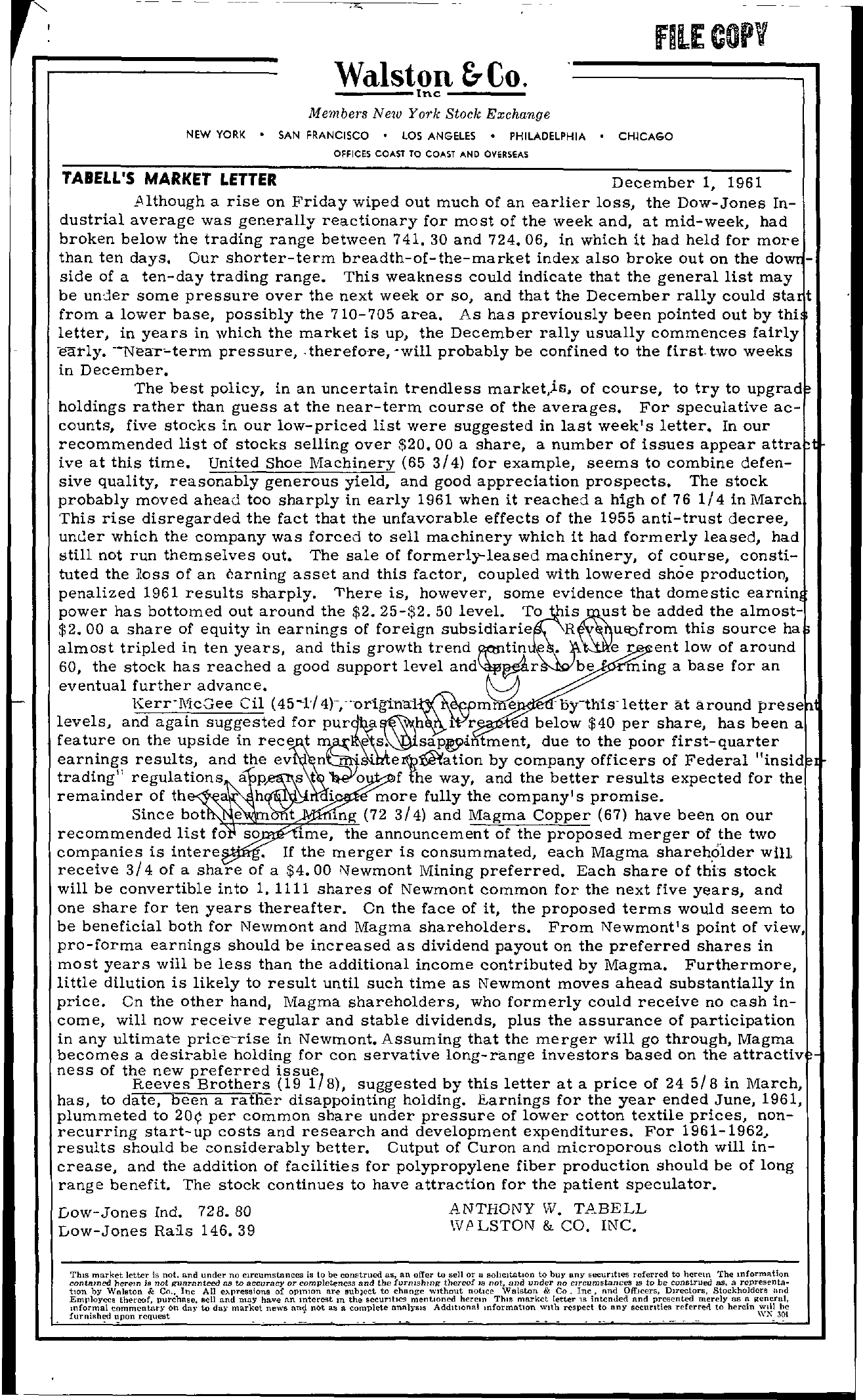 -, fILE COpy NEW YORK Walston &- Co. —-Inc –..;…- Members New York Stock Exchange SAN FRANCISCO LOS ANGELES PHILADELPHIA CH1CAGO OFFICES COAST TO COAST AND OVERSEAS TABELL'S MARKET LETTER December 1, 1961 Although a rise on Friday wiped out much of an earlier loss, the Dow-Jones In- dustrial average was generally reactionary for most of the week and, at mid-week, had broken below the trading range between 741.30 and 724.06, in which it had held for more than ten days. Our shorter-term breadth-of-the-market index also broke out on the do side of a ten-day trading range. This weakness could indicate that the general list may be under some pressure over the next week or so, and that the December rally could sta t from a lower base, possibly the 710-705 area. As has previously been pointed out by thi letter, in years in which the market is up, the December rally usually commences fairly -early. –Nearterm pressure, -therefore, 'will probably be confined to the first, two weeks in December. The best policy, in an uncertain trendless market!l, of course, to try to upgrad holdings rather than guess at the near-term course of the averages. For speculative ac- counts, five stocks in our low-priced list were suggested in last week's letter. In our recommended list of stocks selling over 20.00 a share, a number of issues appear attra ive at this time. United Shoe Machinery (65 3/4) for example, seems to combine defen- sive quality, reasonably generous yield, and good appreciation prospects. The stock probably moved ahead too sharply in early 1961 when it reached a high of 76 1/4 in March This rise disregarded the fact that the unfavorable effects of the 1955 anti-trust decree, unuer which the company was forced to sell machinery which it had formerly leased, had still not run themselves out. The sale of formerlJ-leased machinery, of course, consti- tuted the noss of an earning asset and this factor, coupled with lowered shoe production, penalized 1961 results sharply. 'T'here is, however, some evidence that domestic earnin power has bottomed out around the 2.25-2.50 level'i\1 be added the almost- 2.00 a share of equity in earnings of foreign subsidiarie R uEtJfrom this source ha almost tripled in ten years, and this growth trend ptmtin. e rent low of around 60, the stock has reached a good support level eventual further advance. Kerr-McGee eil 0 be ming a base for an at around prese levels, and again suggested for ed below 40 per share, has been a feature on the upside in earnings results, and the eVl n .. due to the poor first-quarter by company officers of Federal insid trading regulations a remainder of th a h 0 f the way, and the better results expected for the i more fully the company's promise. Since bot l e t lng (72 3/4) and Magma Copper (67) have been on our recommended list fo ime, the announcement of the proposed merger of the two companies is intere If the merger is consummated, each Magma shareholder will receive 3/4 of a share of a 4.00 Newmont Mining preferred. Each share of thb stock will be convertible into 1. 1111 shares of Newmont common for the next five years, and one share for ten years thereafter. On the face of it, the proposed terms would seem to be beneficial both for Newmont and Magma shareholders. From I\ewmont's point of view, pro-forma earnings should be increased as dividend payout on the preferred shares in most years will be less than the additional income contributed by Magma. Furthermore, little dilution is likely to result until such time as Newmont moves ahead substantially in price. On the other hand, Magma shareholders, who formerly could receive no cash in- come, will now receive regular and stable dividends, plus the assurance of participation in any ultimate pric-e-rise in Newmont. Assuming that the merger will go through, Magma becomes a desirable holding for con servative long-range investors based on the attractiv ness of the new preferred issue Reeves Brothers (191/8), suggested by this letter at a price of 24 5/8 in March, has, to date, been a rattier disappointing holding. arnings for the year ended June, 1961, plummeted to 20 per common share under pressure of lower cotton textile prices, nonrecurring start-up costs and research and development expenditures. For 1961-1962, results should be considerably better. Output of Curon and microporous cloth will in- crease, and the addition of facilities for polypropylene fiber production should be of long range benefit. The stock continues to have attraction for the patient speculator. Low-Jones Ind. 728.80 Low-Jones Rals 146.39 ANTHONY lTV. TABELL WI'LSTON & CO. INC. This market letter is not, and under no cIrcumstances is to bot' construed as, an offer to sell or a BoilcltatJOn to bu)' any securttles referred to herem The Information contmned herem is not /orUllrllntced IlB to accuracy or complet4;oncss and the fUTlIIshmg thereof J8 not. and under no Clrcumstancell 15 to be construed as, a rcpre5enta t10n by '''olston & Co Inc All cpTessions of OPlnlOn BI'e BubJcct to change wlthout notIce Walston & Co, Inc. nnd Oft'lcers, D1Tcctors, Stockholders lind Emliloyece thereof, purchase, Bell and may have an Interest m the SCCUrItles mentIOned herein ThiS market. letter IS intended find presented merely as a general, lllormal commentnr)' on dny to day market news and not as a complete annlysls Additional mformatlOn With respect to any secUrIties referrerl to herein will he request' \\'X 30l