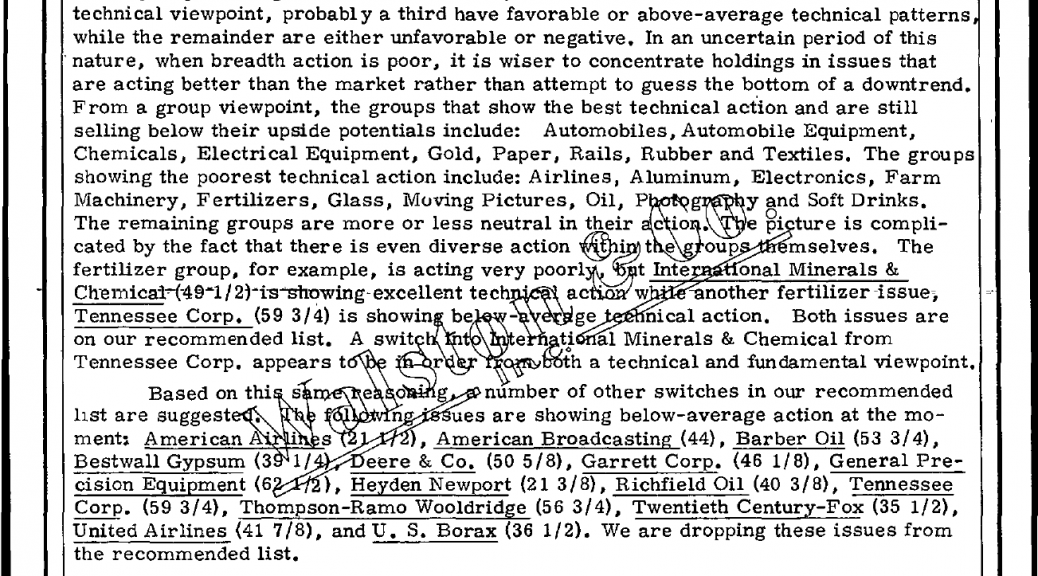 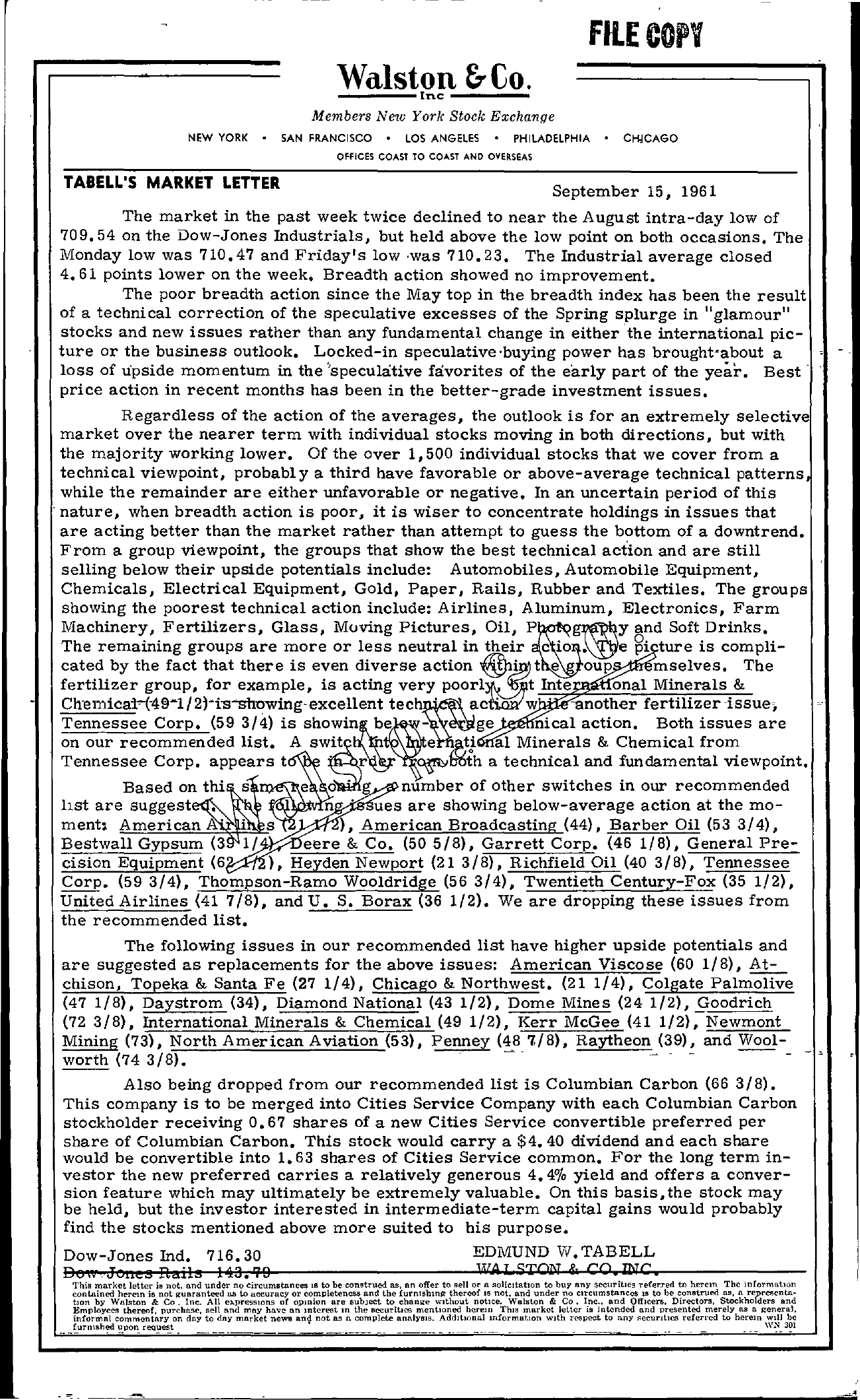 FilE COpy Walston &Co. Inc Members New York Stock Exchange NEW YORK SAN FRANCISCO LOS ANGELES PHILADELPHIA CH,lCAGO OfFICES COAST TO COAST AND OVERSEAS TABELL'S MARKET LETTER September 15, 1961 The market in the past week twice declined to near the August intra-day low of 709.54 on the Dow-Jones Industrials, but held above the low point on both occasions. The Monday low was 710.47 and Friday's low -was 710.23. The Industrial average closed 4.61 pOints lower on the week. Breadth action showed no improvement. The poor breadth action since the May top in the breadth index has been the result of a technical correction of the speculative excesses of the Spring splurge in glamour stocks and new issues rather than any fundamental change in either the international picture or the business outlook. Locked-in speculativebuying power has brought-about a loss of upside momentum in the speculative favorites of the early part of the year. Best' price action in recent months has been in the better-grade investment issues. Regardless of the action of the averages, the outlook is for an extremely selective market over the nearer term with individual stocks moving in both directions, but with the majority working lower. Of the over 1,500 individual stocks that we cover from a technical viewpoint, probably a third have favorable or above-average technical patterns while the remainder are either unfavorable or negative. In an uncertain period of this -nature, when breadth action is poor, it is wiser to concentrate holdings in issues that are acting better than the market rather than attempt to guess the bottom of a downtrend. From a group viewpoint, the groups that show the best technical action and are still selling below their upside potentials include Automobiles, Automobile Equipment, Chemicals, Electrical Equipment, Gold, Paper, Rails, Rubber and Textiles. The groups showing the poorest technical action include Airlines, Aluminum, Electronics, Farm Machinery, Fertilizers, Glass, Moving Pictures, Oil, and Soft Drinks. The remaining groups are more or less neutral in their c io ture is compli- cated by the fact that there is even diverse action t e oup mselves. The fertilizer group, for example, is acting very Inte onal Minerals & w -another fertilizer -issue, Tennessee Corp. (59 3/4) is showin be – ge nical action. Both issues are on our recommended list. A swit e ti al Minerals & Chemical from Based on thi s eo' g number of other switches in our recommended llst are suggest n ' ues are showing below-average action at the mo- menh American A' i s ) , American Broadcasting (44), Barber Oil (53 3/4), Bestwall Gypsum (3 1/ eere & Co. (505/8), Garrett Corp. (461/8), General Pre- cision Equipment (6 ), Heyden Newport (21 3/8), Richfield Oil (403/8), Tennessee Corp. (593/4), Thompson-Ramo Wooldridge (56 3/4), Twentieth Century-Fox (35 1/2), United Airlines (41 7/8), and U. S. Borax (36 1/2). We are dropping these issues from the recommended list. The following issues in our recommended list have higher upside potentials and are suggested as replacements for the above issues American Viscose (60 1/8), At- chison, Topeka & Santa Fe (27 1/4), Chicago & Northwest. (21 1/4), Colgate Palmolive (471/8), Daystrom (34), Diamond National (431/2), Dome Mines (24 1/2), Goodrich (72 3/8), International Minerals & Chemical (491/2), Kerr McGee (41 1/2), Newmont Mining (73), North American Aviation (53), Penney '1./8), Raytheon (39), and Wool- worth (74 3/8). — – Also being dropped from our recommended list is Columbian Carbon (66 3/8). This company is to be merged into Cities Service Company with each Columbian Carbon stockholder receiving 0.67 shares of a new Cities Service convertible preferred per share of Columbian Carbon. This stock would carry a 4.40 dividend and each share would be convertible into 1.63 shares of Cities Service common. For the long term investor the new preferred carries a relatively generous 4.40/0 yield and offers a conversion feature which may ultimately be extremely valuable. On this baSiS, the stock may be held, but the investor interested in intermediate-term capital gains would probably find the stocks mentioned above more suited to his purpose. Dow-Jones Ind. 716.30 EDMUND vV.TABELL B e.. . n cfls'ias !i4a. SXC)N & CO.ThIC. This market letter is not, and under no circumBtnnces IS to be construed as, an offer to sell or a soliCitatIOn to buy any securities referred to herem The mformatlon conwined hereIn is not guaranteed lUI to accuracy or completeness and the furnlshmg thereof IS not, and under no Circumstances IS to be construed as, a representa- tIOn by Walston &, Co. Inc. All e.presslOns of opmion are subJect to change Without notice. Walston & Co, Inc.. and Officers, Directors, Stockholders and Employees thereof, purchase, sell and may ha\'C an mterest m the securities mentioned herem ThiS market letter is intended and presented merely as a general, informal commentary on dny to day market news an9 not as n complete analYSIS. AddltlOnal information WJth respect to any feCurltlcs referred to herem wlil be .. . . . . WN 301