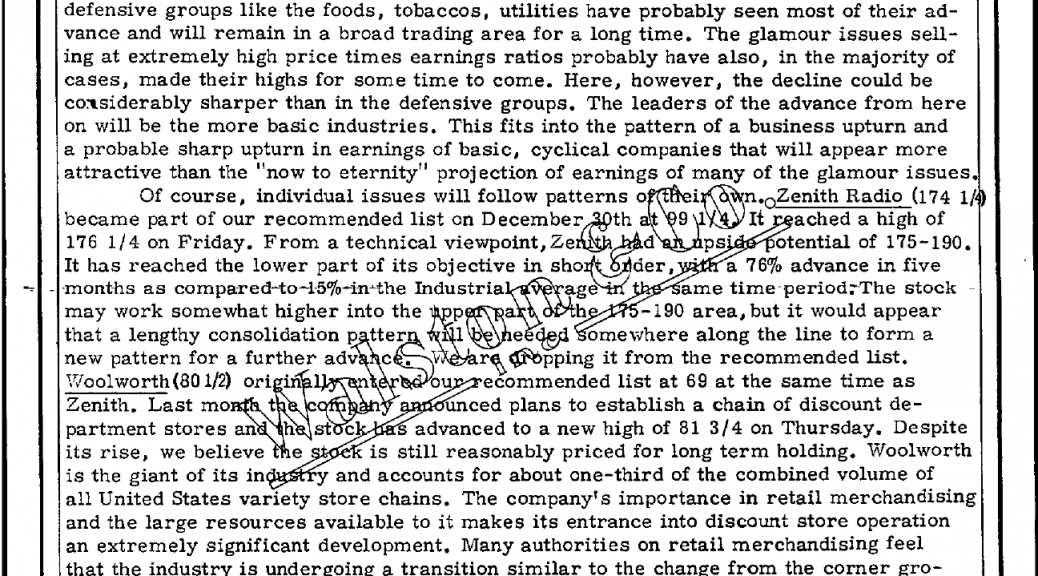 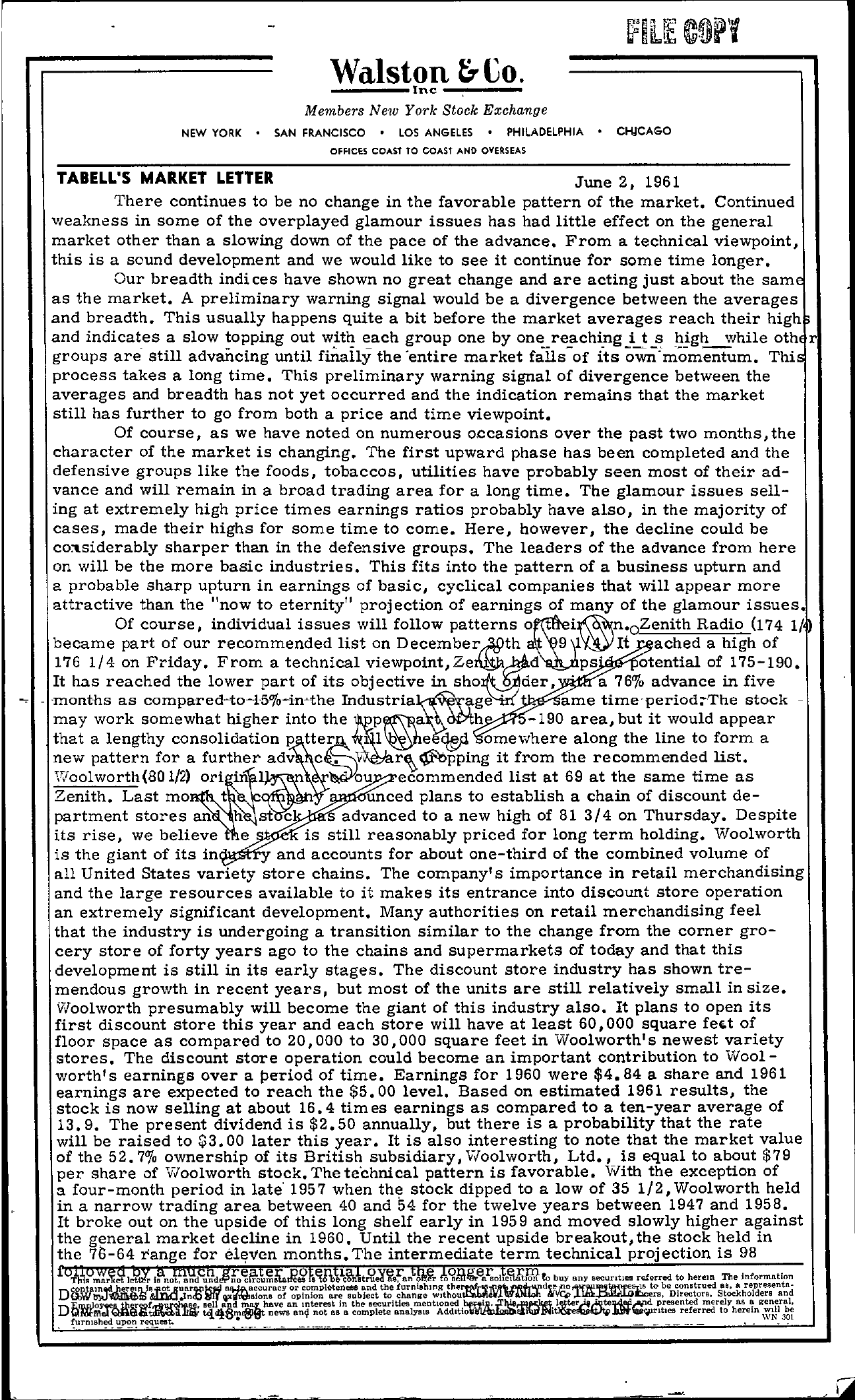 Walston &Co. Inc – Members New York Stock Exchange NEW YORK SAN FRANCISCO LOS ANGELES PHILADELPHIA CHlCAGO OFFICES COAST TO COAST AND OVERSEAS TABELL'S MARKET LETTER June 2, 1961 There continues to be no change in the favorable pattern of the market. Continued weakness in some of the overplayed glamour issues has had little effect on the general market other than a slowing down of the pace of the advance. From a technical viewpoint, this is a sound development and we would like to see it continue for some time longer. Our breadth indices have shown no great change and are acting just about the -'lll as the market. A preliminary warning signal would be a divergence between the averages and breadth. This usually happens quite a bit before the market averages reach their 'Ul;!;P and indicates a slow topping out with each group one by one reaching its high while otllE/Jr1 groups are' still advancing until finaily the 'entire market fails-of its process takes a long time. This preliminary warning signal of divergence between the averages and breadth has not yet occurred and the indication remains that the market still has further to go from both a price and time viewpoint. Of course, as we have noted on numerous occasions over the past two months, the character of the market is changing. The first upward phase has been completed and the defensive groups like the foods, tobaccos, utilities have probably seen most of their ad- vance and will remain in a broad trading area for a long time. The glamour issues sell- ing at extremely high price times earnings ratios probably have also, in the majority of cases, made their highs for some time to come. Here, however, the decline could be cotsiderably sharper than in the defensive groups. The leaders of the advance from here on will be the more basic industries. This fits into the pattern of a business upturn and a probable sharp upturn in earnings of basic, cyclical companies that will appear more attractive than the now to eternity projection of earnings of many of the glamour iss'ues.1 Of course, individual issues will follow patterns Radio (174 became part of our recommended list on t 9 lWIt ached a high of 176 1/4 on Friday. From a technical ps otential of 175-190. It has reached the lower part of its objective in shotf\ as Industria . a 76 advance in five ame time'period;–The stock – may work somewhat higher into the p a h -190 area, but it would appear new pattern for a further adv c. N r\ it from the recommended list. V/oolworth(80 in liE Zenith. Last mo t ou ecommended list at 69 at the same time as unced plans to establish a chain of discount de- partment stores an Ii st c s advanced to a new high of 81 3/4 on Thursday. Despite its rise, we believe e is still reasonably priced for long term holding. Woolworth is the giant of its in y and accounts for about one-third of the combined volume of all United States variety store chains. The company's importance in retail merchandising and the large resources available to it makes its entrance into discount store operation an extremely significant development. Many authorities on retail merchandising feel that the industry is undergoing a transition similar to the change from the corner gro- cery store of forty years ago to the chains and supermarkets of today and that this development is still in its early stages. The discount store industry has shown tre- mendous growth in recent years, but most of the units are still relatively small in size. Woolworth presumably will become the giant of this industry also. It plans to open its first discount store this year and each store will have at least 60,000 square fe'-t of floor space as compared to 20,000 to 30,000 square feet in Woolworth's newest variety stores. The discount store operation could become an important contribution to Wool- worth's earnings over a period of time. Earnings for 1960 were 4.84 a share and 1961 earnings are expected to reach the 5.00 level. Based on estimated 1961 results, the stock is now selling at about 16.4 tim es earnings as compared to a ten-year average of 13.9. The present dividend is 2.50 annually, but there is a probability that the rate will be raised to 03.00 later this year. It is also interesting to note that the market value of the 52.7 ownership of its British subsidiary, Y/oolworth, Ltd., is equal to about 79 per share of Vloolworth stock. The technical pattern is favorable. With the exception of 3. four-month period in late' 1957 when the stock dipped to a low of 35 1/2, Woolworth held in a narrow trading area between 40 and 54 for the twelve years between 1947 and 1958. It broke out on the upside of this long shelf early in 1959 and moved slowly higher against the general market decline in 1960. Until the recent upside breakout, the stock held in the 713-64 range for elE!V'en months. The intermediate term technical ection is 98 and ns a general, herein WIll be WN 301