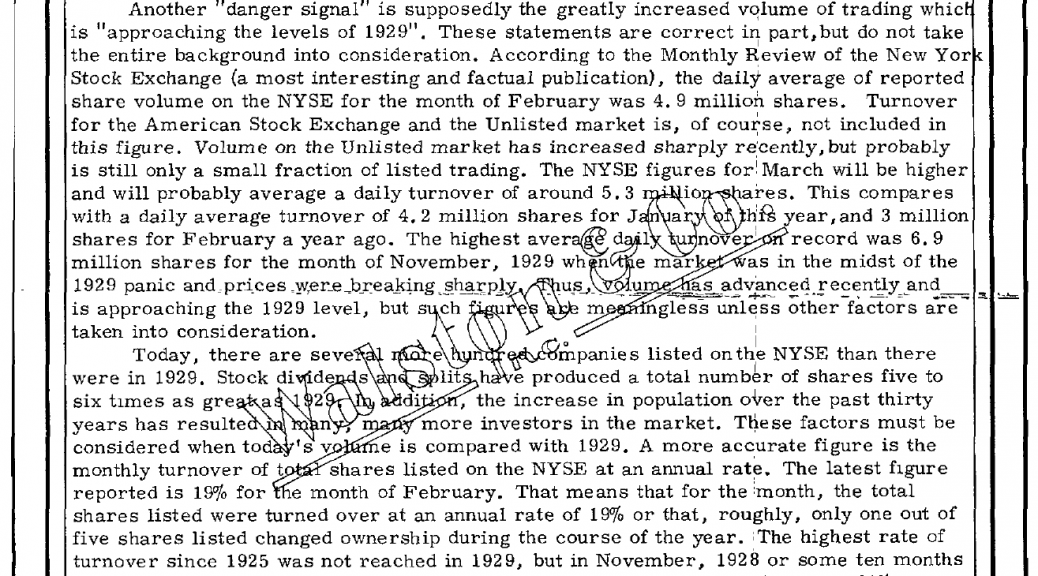 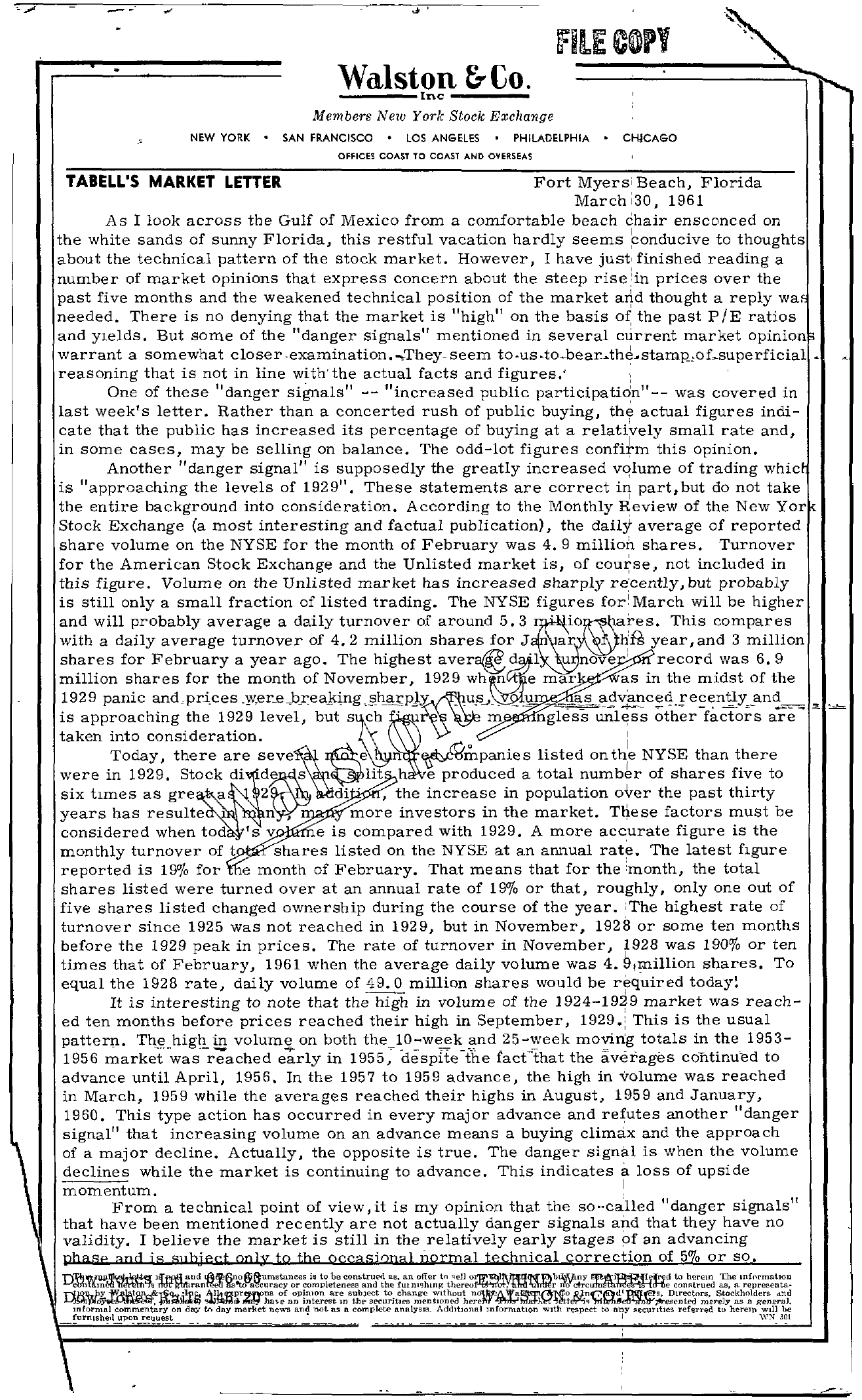 fiLE COpy Walston fTCo. Inc —- Members New York Stock Exchange NEW YORK SAN FRANCISCO LOS ANGELES PHILADELPHIA OFfiCES COAST TO COAST AND OVERSEAS CHlCAGO TABELL'S MARKET LETTER Fort Myers Beach, Florida Marchi30, 1961 As I look across the Gulf of Mexico from a comfortable beach chair ensconced on the white sands of sunny Florida, this restful vacation hardly seems conducive to thoughts about the technical pattern of the stock market. However, I have just, finished reading a number of market opinions that express concern about the steep rise lin prices over the past five months and the weakened technical position of the market thought a reply wa, needed. There is no denying that the market is high on the basis the past piE ratios and YIelds. But some of the danger signals mentioned in several current market opinion warrant a somewhat closer -examination ..,They- seem to-us reasoning that is not in line with'the actual facts and figures ' One of these danger signals — increased public participatidn– was covered in last week's letter. Rather than a concerted rush of public buying, actual figures indi- I cate that the public has increased its percentage of buying at a relatively small rate and, in some cases, may be selling on balance. The odd-lot figures confitm this opinion. Another danger signal is supposedly the greatly increased vqlume of trading whic is approaching the levels of 1929. These statements are correct in part, but do not take I the entire background into consideration. According to the Monthly Review of the New Yor Stock Exchange (a most interesting and factual publication), the daily average of reported share volume on the NYSE for the month of February was 4.9 millioh shares. Turnover for the American Stock Exchange and the Unlisted market is, of course, not included in this figure. Volume on the Unlisted market has increased sharply recently, but probably is still only a small fraction of listed trading. The NYSE figures for! March will be higher and will probably average a daily turnover of around 5.3 ares. This compares with a daily average turnover of 4.2 million shares for J aT liB; year, and 3 million shares for February a year ago. The highest -1 u nove I record was 6.9 million shares for the month of November, 1929 wh n e mar as in the midst of the taken into consideration. Today, there are seve en 0i s listed on the NYSE than there six hmes as gre 2 d i ' , the increase in population OVer the past thirty years has resulte n , more investors in the market. Tnese factors must be considered when tod 's v e is compared with 1929. A more accurate figure is the monthly turnover of t shares listed on the NYSE at an annual rate. The latest fIgure reported is 190/0 for e month of February. That means that for the month, the total shares listed were turned over at an annual rate of 190/0 or that, roughly, only one out of five shares listed changed ownership during the course of the year. The highest rate of turnover since 1925 was not reached in 1929, but in November, 1928 or some ten months before the 1929 peak in prices. The rate of turnover in November, 1928 was 1900/0 or ten I times that of February, 1961 when the average daily volume was 4. 9,million shares. To equal the 1928 rate, daily volume of 49.0 million shares would be required today! It is interesting to note that t h e- – h — igh in volume of the 1924-192I 9 market was reach- ed ten months before prices reached their high in September, 1929.; This is the usual pattern. on both thelO-week and 25-week moving totals in the 1953- 1956 market was r7ached in 1955; desplte-the fact-that the averages continued to advance until April, 1956. In the 1957 to 1959 advance, the high in volume was reached in March, 1959 while the averages reached their highs in August, 1959 and January, 1960. This type action has occurred in every major advance and refutes another danger signal that increasing volume on an advance means a buying climax and the approach of a major decline. Actually, the opposite is true. The danger signal is when the volume adeclines while the market is continuing to advance. This indicates loss of upside momentum. I From a technical point of view,it is my opinion that the so-called danger signals that have been mentioned recently are not actually danger signals and that they have no validity. I believe the market is still in the relatively early stages 9f an advancing phase and js sllbject only to the occasional Dormal technical correction of 5 or so. and is to be con!otruerlas, an offer to ell to ho!rem The informatIon cUbUi.mM lfEM!lhh a'l!'curacy or completeness and the no cOlllltrued as, a representa N).QlJ…b,! of op!mon are subJect to, change without Directors, Stockholders dnd Jun-e an mterest In the securities mentlonM hereM mereJy as a l!'encraJ. mformal commentary on day to day market ne….S and not as a complete analYSIS. AdditIonal mforJnatlOn With respect to any secunttes referred tu herem Will be 1