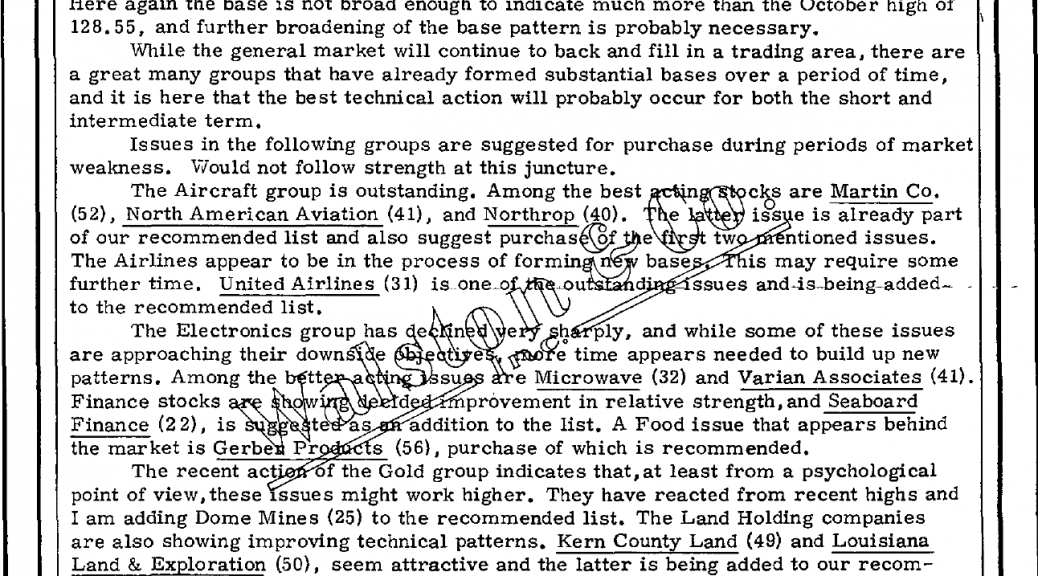 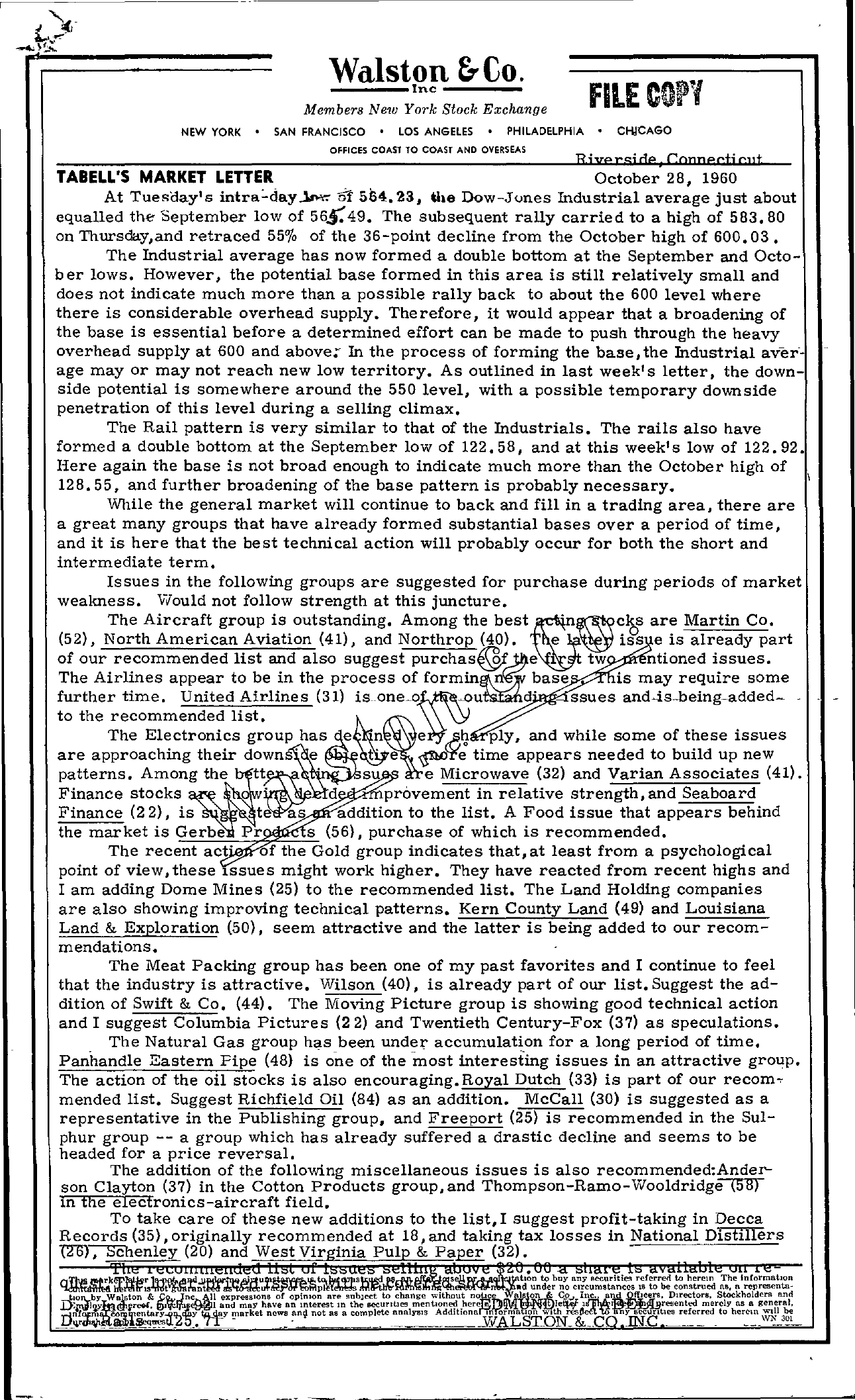 – – – – – – – – – – – – – – – – – – – – – – – – – – —— Walston &Co. lnc —– Members New York Stock Exchange NEW YORK SAN FRANCISCO LOS ANGELES PHILADELPHIA CI-\ICAGO OFFICES COAST TO COAST AND OVERSEAS Riverside , ConnecHCllt TABEll'S MARKET lEnER October 28, 1960 At Tuesday's 5f 564.23, the Dow-Jones Industrial average just about equalled the September low of 56.(.'49. The subsequent rally carried to a high of 583.80 on Thursday,and retraced 550/0 of the 36-point decline from the October high of 600.03. The Industrial average has now formed a double bottom at the September and Octo- b er lows. However, the potential base formed in this area is still relatively small and does not indicate much more than a possible rally back to about the 600 level where there is considerable overhead supply. The refore, it would appear that a broadening of the base is essential before a determined effort can be made to push through the heavy overhead supply at 600 and above In the process of forming the base, the Industrial aver– age mayor may not reach new low territory. As outlined in last week's letter, the down- side potential is somewhere around the 550 level, with a possible temporary downside penetration of this level during a selling climax. The Rail pattern is very similar to that of the Industrials. The rails also have formed a double bottom at the September low of 122.58, and at this week's low of 122.92. Here again the base is not broad enough to indicate much more than the October high of 128.55, and further broadening of the base pattern is probably necessary. While the general market will continue to back and fill in a trading area, there are a great many groups that have already formed substantial bases over a period of time, and it is here that the best technical action will probably occur for both the short and intermediate term. Issues in the following groups are suggested for purchase during periods of market weakness. Yv'ould not follow strength at this juncture. The Aircraft group is outstanding. Among the are Martin Co. (52), North American Aviation (41), and Northrop (40). e e is already part of our recommended list and also suggest purchasW,.Jle 1 tw ntioned issues. The Airlines appear to be in the process of base is may require some further time. United Airlines (31) ssues and..is–being-added- – to the recommended list. The Electronics en e ply, and while some of these issues are approaching their downs e t e time appears needed to build up new patterns. Among the su e Microwave (32) and Varian Associates (41). Finance stocks . d provement in relative strength, and Seaboard Finance (22), is t as addition to the list. A Food issue that appears behind the market is Gerbe Pr s (56), purchase of which is recommended. The recent act of the Gold group indicates that, at least from a psychological point of view, these lssues might work higher. They have reacted from recent highs and I am adding Dome Mines (25) to the recommended list. The Land Holding companies are also showing improving technical patterns. Kern County Land (49) and Louisiana Land & Exploration (50), seem attractive and the latter is being added to our recom- mendations. The Meat Packing group has been one of my past favorites and I continue to feel that the industry is attractive. Wilson (40), is already part of our list. Suggest the ad- dition of Swift & Co. (44). The Moving Picture group is showing good technical action and I suggest Columbia Pictures (22) and Twentieth Century-Fox (37) as speCUlations. The Natural Gas group has been under accumulation for a long period of time. Panhandle Eastern Pipe (48) is one of the most interesting issues in an attractive gro,-!p. The action of the oil stocks is also encouraging. Royal Dutch (33) is part of our recom- mended list. Suggest Richfield Oil (84) as an addition. McCall (30) is suggested as a representative in the Publishing group. and Freeport (25) is recommended in the Sul- phur group — a group which has already suffered a drastic decline and seems to be headed for a price reversal. The addition of the following miscellaneous issues is also recommendedAnderson Clayton (37) in the Cotton Products group, and Thompson-Ramo- Wooldridge (58) 10 the electronics-aircraft field. To take care of these new additions to the list, I suggest profit-taking in Decca Records (35), originally recommended at 18, and taking tax losses in National Distillers T2or;–SChenley (20) and West Virginia Pulp & Paper (32). ptseJlW..e…tll to buy any securities referred to herein The Informa.tIon ikMlr'lsrtdtVffimntWt! ad under no circumstances IS to be eonstrued as, Ii representa- .,….Jlo'\,by Walston & expressions of opimon are subJect to change without notice n & ep…. an fflcers, Directors. Stockholders and tltreM' and maY have an mterest m the securltJes mentIoned here t leW 1 resented merely as a general, . !I1arket news – notasa complete analy;lS WALSIoTn DWlNth &C IDLC secUrities referred to herem be IV' 301