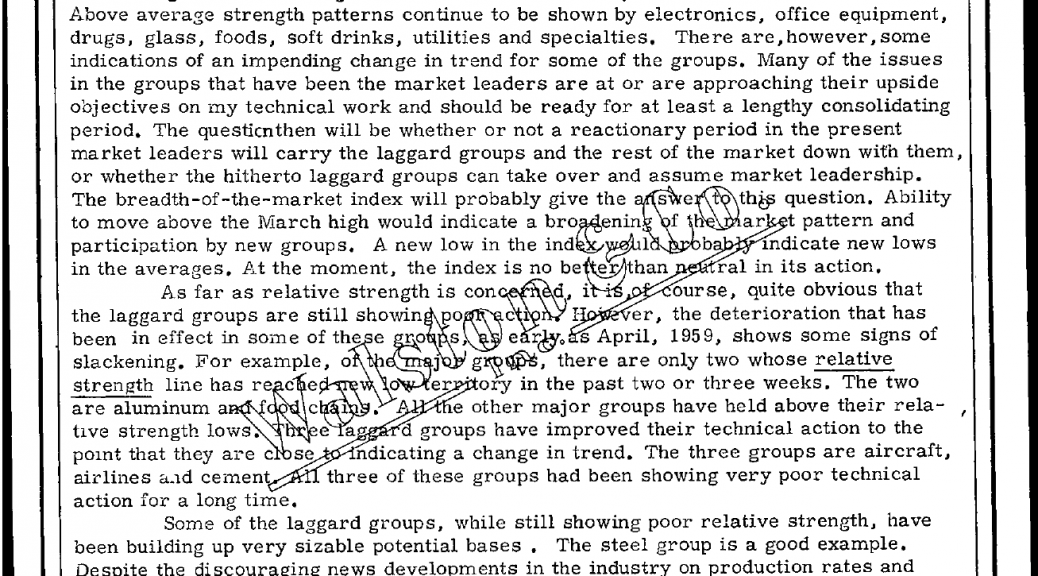 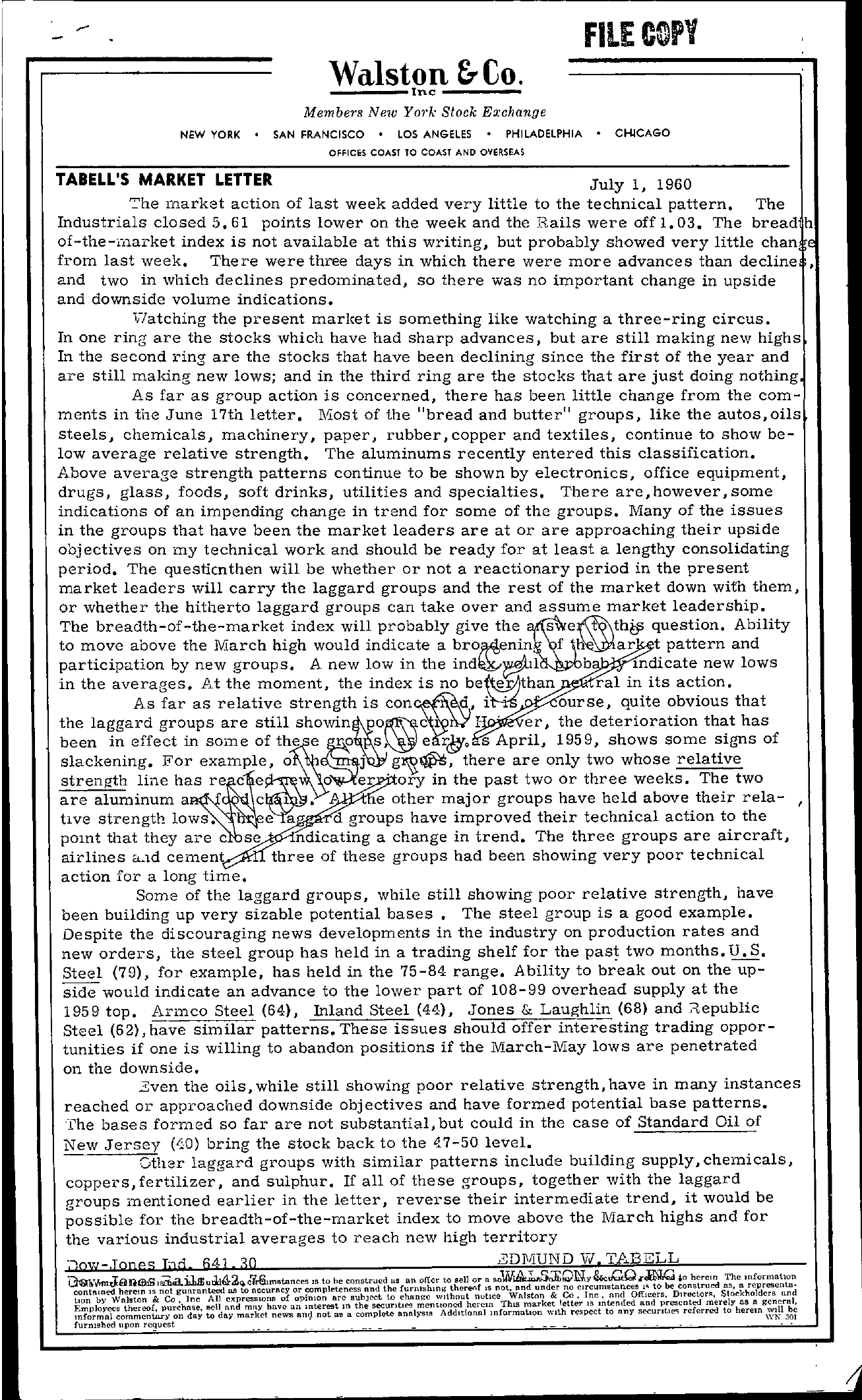 FILE COpy Walston &- Co. Membe,s New Ym Stock Exchange NEW YORK SAN FRANCISCO LOS ANGELES PHILADELPHIA CHICAGO OF-fICES COAST TO COAST AND OVERSEAS TABELL'S MARKET LETTER July I, 1960 '''he market action of last week added very little to the technical pattern. The Industrials closed 5.61 points lower on the week and the Rails were off 1.03. The bread h of-the-mal'ket index is not available at this writing, but probably showed very little chan from last week. There were three days in which there were more advances than decline , and two in which declines predominated, so there was no important change in upside and downside volume indications. 1,7atching the present market is something like watching a three-ring circus. In one ring are the stocks which have had sharp advances, but are still making new highs In the second ring are the stocks that have been declining since the first of the year and are still making new lows; and in the third ring are the stocks that are just doing nothing As far as group action is concerned, there has been little change from the com- ments in the June 17th letter. lViost of the bread and butter groups, like the autos,oils steels, chemicals, machinery, paper, rubber, copper and textiles, continue to show be- low average relative strength. The aluminums recently entered this classification. Above average strength patterns continue to be shown by electronics, office equipment, drugs, glass, foods, soft drinks, utilities and specialties. There are, however, some indications of an impending change in trend for some of the groups. Many of the issues in the groups that have been the market leaders are at or are approaching their upside objectives on my technical work and should be ready for at least a lengthy consolidating period. The questicnthen will be whether or not a reactionary period in the present market leaders will carry the laggard groups and the rest of the market down with them, or whether the hitherto laggard groups can take over and assume market leadership. The breadth-of-the-market index will probably give the question. Ability to move above the March high would indicate a bro,S6enin f t pattern and participation by new groups. A new low in the b mdicate new lows in the averages. At the moment, the index is no beRe!;;lthan ral in its action. As far as relative strength is itiS' ourse, quite obvious that the laggard groups are still r er, the deterioration that has been in effect in some of e rb',as April, 1959, shows some signs of slackening. For example, 0 J there are only two whose relative strength line c 0 er ory in the past two or three weeks. The two are aluminum a tlve strength lows. c 1 A e other major groups have held above their rela- I e a a groups have improved their technical action to the pomt that they are c se ndicating a change in trend. The three groups are aircraft, airlines .ld cement three of these groups had been showing very poor technical action for a long Some of the laggard groups, while still showing poor relative strength, have been building up very sizable potential bases. The steel group is a good example. Despite the discouraging news developments in the industry on production rates and new orders, the steel group has held in a trading shelf for the two months. U. S. Steel (79), for example, has held in the 75-84 range. Ability to break out on the up- side would indicate an advance to the lower part of 108-99 overhead supply at the 1959 top. Armco Steel (64), Inland Steel (44), Jones & Laughlin (68) and ;tepublic Steel (62), have similar patterns. These issues should offer interesting trading oppor- tunities if one is willing to abandon positions if the March-May lows are penetrated on the downside. 3ven the oils, while still showing poor relative strength, have in many instances reached or approached downside objectives and have formed potential base patterns. The bases formed so far are not substantial, but could in the case of Standard Oil of New Jersey (10) bring the stock back to the 47-50 level. Gther laggard groups with similar patterns include building supply, chemicals, coppers, fertilizer, and sulphur. If all of these groups, together with the laggard groups mentioned earlier in the letter, reverse their intermediate trend, it would be possible for the breadth-of-the-market index to move above the March highs and for the various industrial averages to reach new high territory -'tOW-TrOOeS lilO 6.11 30 .3DlVUI\TD VI. TP.l.BELL c7r hmstances IS to he construed us an offer to sell or a &C,GQm&d herem The informatIon contained herem IS not guaranteed us to accuracy or completeness and the furnishing thereor IS not. and under no CIrcumstances 1; to be construed 85, a representn. tlOn by Wnlston & Co lnc All expresSIOns of opimon arc subJect to ehnnpe WIthout nutice Walston & Co. Inc, nnd OffIcers, Stockholders and Employeee thereof sell and mllY have an Interest iR the securItIes mentloned herem ThlS market letter IS mtended and presented merely as II general, commenWrY on day to day market news nng not as a complete annlysls Addltionnl mformatlon WIth respect to any secuntlei referred to herem furnlsheo rC9uest . . .. . ..