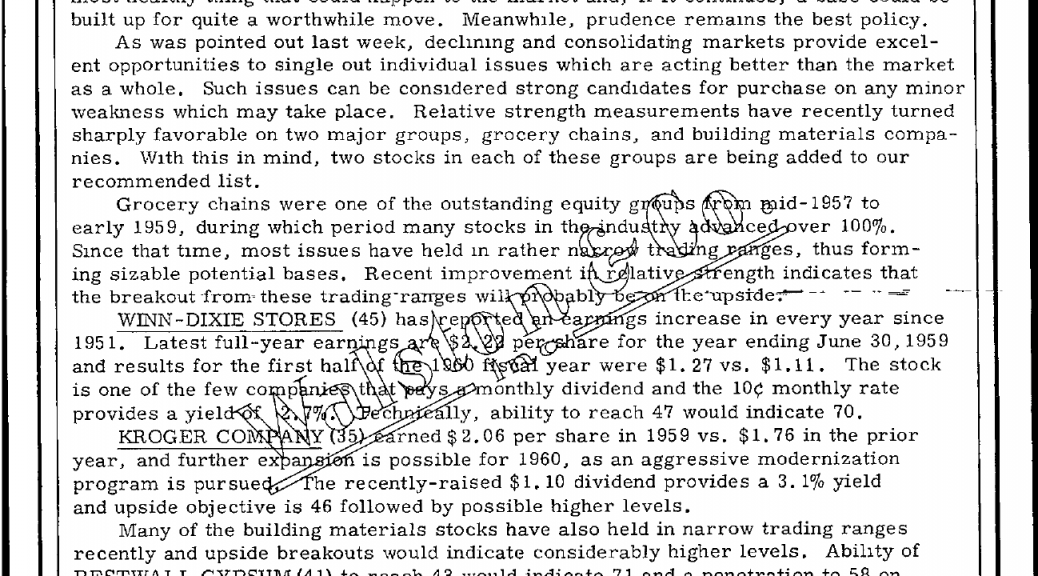 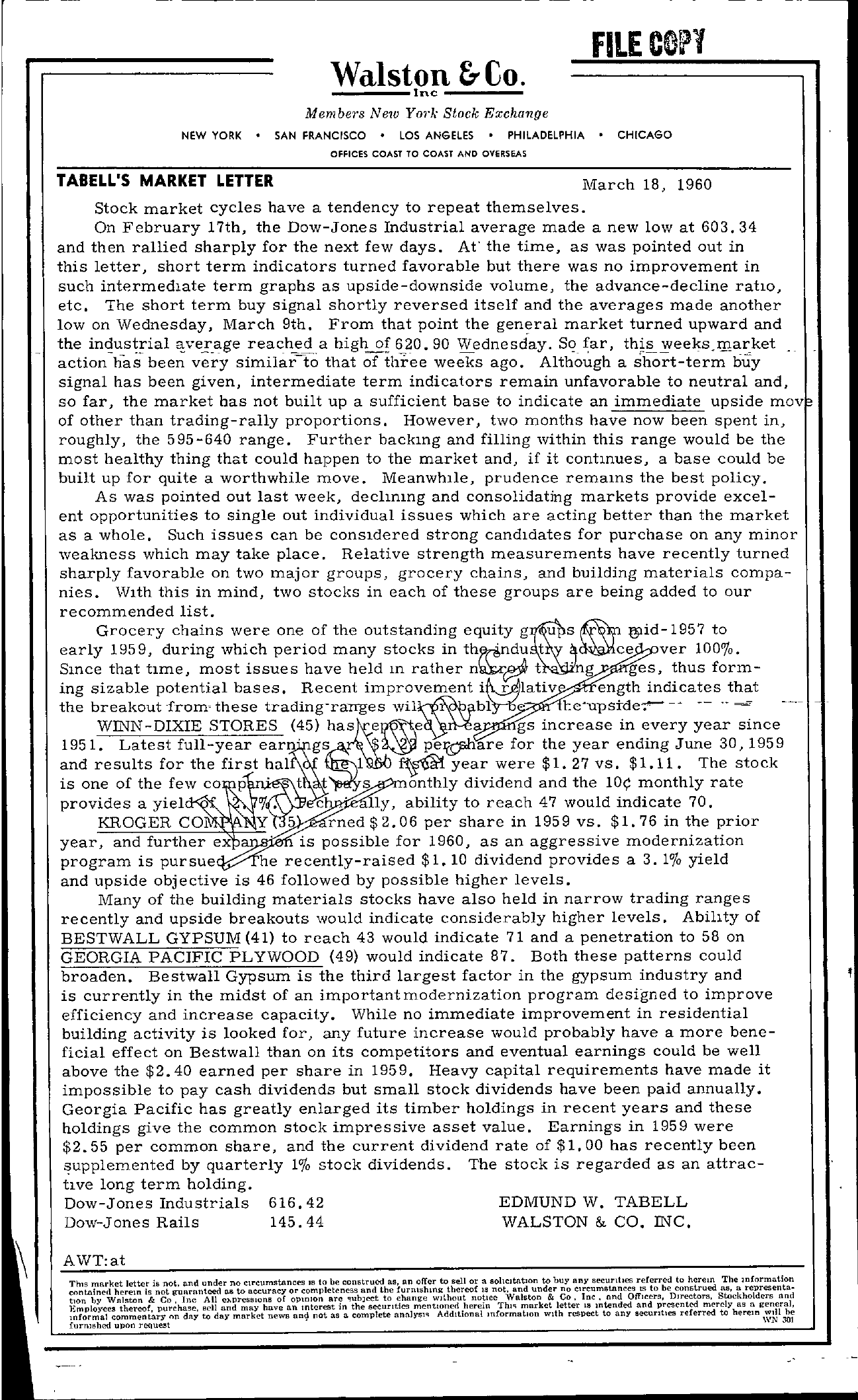 —————— — Walston &Co. FILE Mem bers N elO YOT; Stock Exchange NEW YORK SAN FRANCISCO LOS ANGELES PHILADELPHIA CHICAGO OFFICES COAST TO COAST AND OVERSEAS TABELL'S MARKET LETTER March 18, 1960 Stock market cycles have a tendency to repeat themselves. On February 17th, the Dow-Jones Industrial average made a new low at 603.34 and then rallied sharply for the next few days. At' the time, as was pointed out in this letter, short term indicators turned favorable but there was no improvement in such intermedlate term graphs as upside-downside volume, the advance-decline raho, etc. The short term buy signal shortly reversed itself and the averages made another low on Wednesday, March 9th. From that point the general market turned upward and the high..-f 90 Wednesday. Sq far, th!'\VeekslI!arket action has been very similar-to that of three weeks ago. Although a short-term buy signal has been given, intermediate term indicators remain unfavorable to neutral and, so far, the market has not built up a sufficient base to indicate an immediate upside mov of other than trading-rally proportions. However, two months have now been spent in, roughly, the 595 -640 range. Further backmg and filling within this range would be the most healthy thing that could happen to the market and, if it contmues, a base could be built up for quite a worthwhile move. Meanwhlle, prudence remams the best policy. As was pointed out last week, declmmg and consolidating markets provide excel- ent opportunities to single out individual issues which are acting better than the market as a whole. Such issues can be consldered strong candldates for purchase on any minor weakness which may take place. Relative strength measurements have recently turned sharply favorable on two major groups, grocery chains, and building materials compa- nies. Wlth this in mind, two stocks in each of these groups are being added to our recommended list. Grocery chains were one of the outstanding equity to early 1959, during which period many stocks in t ver 1000/0. Smce that hme, most issues have held m rather t 'ng ges, thus form- ing sizable potential bases. Recent improvement i(\..le)lativ ength indicates that the breakout from- these trading-ranges te'upstde-;— — — — — — WINN-DIXIE STORES (45) 1951. Latest full-year 2& gs increase in every year since for the year ending June 30,1959 and results for the first hal 1 m 'is one of the few co p tt s year were 1. 27 vs. 1.11. The stock onthly dividend and the 10 monthly rate provides a yiel 0;, c ' lly, ability to reach 47 would indicate 70. KROGER COl\ Y 5 rned 2.06 per share in 1959 vs. 1.76 in the prior year, and further ex a is possible for 1960, as an aggressive modernization program is pursue he recently-raised 1. 10 dividend provides a 3. 170 yield and upside objective is 46 followed by possible higher levels. Many of the building materials stocks have also held in narrow trading ranges recently and upside breakouts would indicate considerably higher levels. Abihty of BESTWALL GYPSUM (41) to reach 43 would indicate 71 and a penetration to 58 on GEORGIA PACIFIC PLYWOOD (49) would indicate 87. Both these patterns could broaden. Bestwall Gypsum is the third largest factor in the gypsum industry and is currently in the midst of an important modernization program designed to improve efficiency and increase capacity. While no immediate improvement in residential building activity is looked for, any future increase would probably have a more bene- ficial effect on Bestwall than on its competitors and eventual earnings could be well above the 2.40 earned per share in 1959. Heavy capital requirements have made it impossible to pay cash dividends but small stock dividends have been paid annually. Georgia Pacific has greatly enlarged its timber holdings in recent years and these holdings give the common stock impressive asset value. Earnings in 1959 were 2.55 per common share, and the current dividend rate of 1.00 has recently been ,upplemented by quarterly 170 stock dividends. The stock is regarded as an attrac- hve long term holding. Dow-Jones Industrials 616.42 Dow-Jones Rails 145.44 EDMUND W. TABELL WALSTON & CO. INC. AWTat ThiS market letter is not. and under no Circumstances IS to be constl'ucd as, an offer to sell or a sohCltatlOn to buy any securitIes referred to herem The mformation contnined herem is not gunrantced M to accuracy or completeness and the furntshmg thcrco! IS not, Bnd under no Circumstances IS to be construed as, a representa- tIOn by Walston & Co Inc All e.prCSSlOns or opmlon are 9uhJcct to chllnge wIthout notice Walston & Co, Inc, ond Officers, DIrectors, Stockholders find Employees thereof, Bell and may have an mtcrest in the SCCUrIties mentIOned ,herein Thl'l market letter IS Intended and presented merely as 11. general, mformal commentary on day to day market news and not as a complete anniYSl9 AdditIOnal mformatlOlI with respect to any secUrIties referred to herem Will be urmshed upon r e q u e s t ' \\'N 301