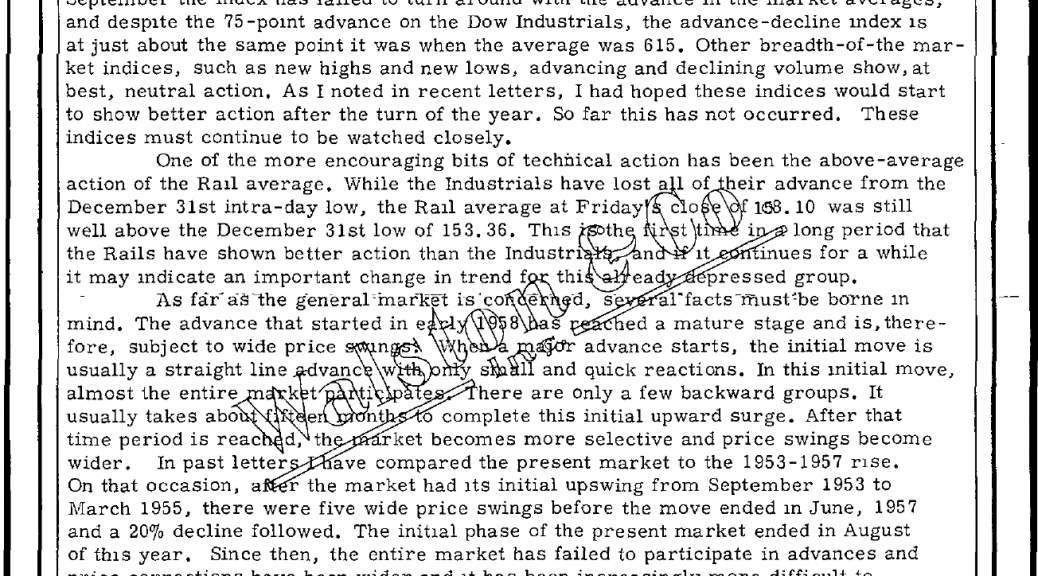 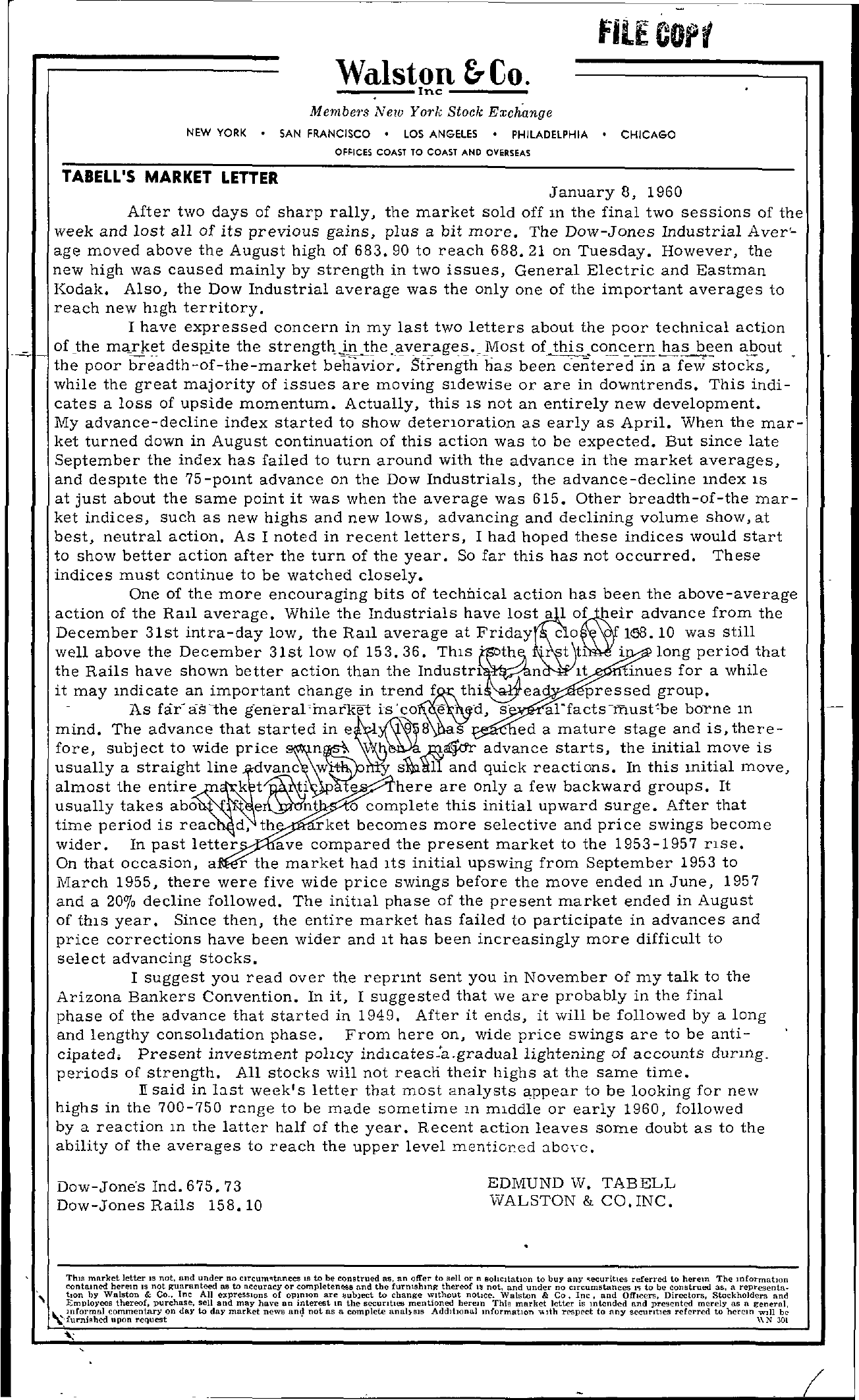 filE COft Walston &- Co. Inc Mernbe,'s New York Stock Exchange NEW YORK SAN FRANCISCO LOS ANGELES PHILADELPHIA CHICAGO OFFICES COAST TO COAST AND OVERSEAS TABELL'S MARKET LETTER January 8, 1960 After two days of sharp rally, the market sold off m the final two sessions of the week and lost all of its previous gains, plus a bit more. The Dow-Jones Industrial Aver'- age moved above the August high of 683.90 to reach 688.21 on Tuesday. However, the new high was caused mainly by strength in two issues, General Electric and Eastman Kodak. Also, the Dow Industrial average was the only one of the important averages to reach new h1gh territory. I have expressed concern in my last two letters about the poor technical action of Jhe ma,r!et despjte the strength,jn the .averages . lVIost of this concern has been about '-0. the poor breadth-of-the-market behavior.- Strength has been cen'tered in -afew stocks, . while the great majority of issues are moving sldewise or are in downtrends. This indi- cates a loss of upside momentum. Actually, this 1S not an entirely new development. lVIy advance-decline index started to show detenoration as early as April. When the mar- ket turned down in August continuation of this action was to be expected. But since late September the index has failed to turn around with the advance in the market averages, and desp1te the 75-pomt advance on the Dow Industrials, the advance-decline mdex 1S at just about the same point it was when the average was 615. Other breadth-of-the mar- ket indices, such as new highs and new lows, advancing and declining volume show, at best, neutral action. As I noted in recent letters, I had hoped these indices would start to show better action after the turn of the year. So far this has not occurred. These indices must continue to be watched closely. One of the more encouraging bits of technical action has been the above-average action of the Rall average. While the Industrials have 1 advance from the December 31st intra-day low, the Ra11 average at Friday co 1GB. 10 was still well above the December 31st low of 153.36. Thls eth ' . t h i long period that the Rails have shown better action than the Industn n lt inues for a while it may mdicate an important change in earl. pressed group. , As far-at'nhe g'eneral-market is'co e' d, S' alfacts-must'be borne m mind. The advance that started in e fore, subj ect to wide price n. wh\M s ed a mature stage and is, thereadvance starts, the initial move is almost the entire k e here are only a few backward groups. It usually takes abo 0 complete this initial upward surge. After that time period is reac d, th rket becomes more selective and price swings become wider. In past letter ave compared the present market to the 1953-1957 I'lse. On that occasion, a I' the market had ltS initial upswing from September 1953 to March 1955, there were five wide price swings before the move ended m June, 1957 and a 200/0 decline followed. The initlal phase of the present market ended in August of th1S year. Since then, the entire market has failed to participate in advances and price corrections have been wider and 1t has been increasingly more difficult to select advancing stocks. I suggest you read over the reprmt sent you in November of my talk to the Arizona Bankers Convention. In it, I suggested that we are probably in the final phase of the advance that started in 1949. After it ends, it will be followed by a long and lengthy consohdation phase. From here on, wide price swings are to be anti- cipated, Present investment polIcy indlCates'a.graduallightening of accounts durmg, periods of strength. All stocks will not reacli their highs at the same time. l! said in lo.st week's letter that most analysts ippear to be looking for new highs in the 700-750 renge to be made sometime m mlddle or early 1960, followed by a reaction m the latter half of the year. Recent action leaves some doubt as to the ability of the averages to reach the upper level mentiGI'ed o.bo\'c. Dow-Jone's Ind. 675. 73 Dow-Jones Rails 158.10 EDMUND W. TABELL WALSTON & CO. INC. ThiS market letter IS not. and under no Clfcumltnnces IS to be construed as, an offer to sell or n sohcltatlOn to buy any cecurit\CS referred to herem The mformabon contamed herem IS not guaranteed as to accuracy or completenE'!S8 nnd the furfllshmg thereof IS not, and under no CIrcumstances I'; to be construed as, a representa '\ tlon by Walston & Co., Inc All expressions of oplfllon are lIub)ect to change Without nohce. Walston & Co, Inc, and Officers, Directors, Stockholders and Employees theroof, purchase, sell and may have an interest In the secUritIes mentioned herem This market letter is mtended and presented merely as a genera\, … mformnl commentary on day to day market news and not as a complete anah-sls Addlbonal informatIOn 'Ith respect to any securltles referred to herem WIll be upon r e q u e s t ' \\ N 30t I