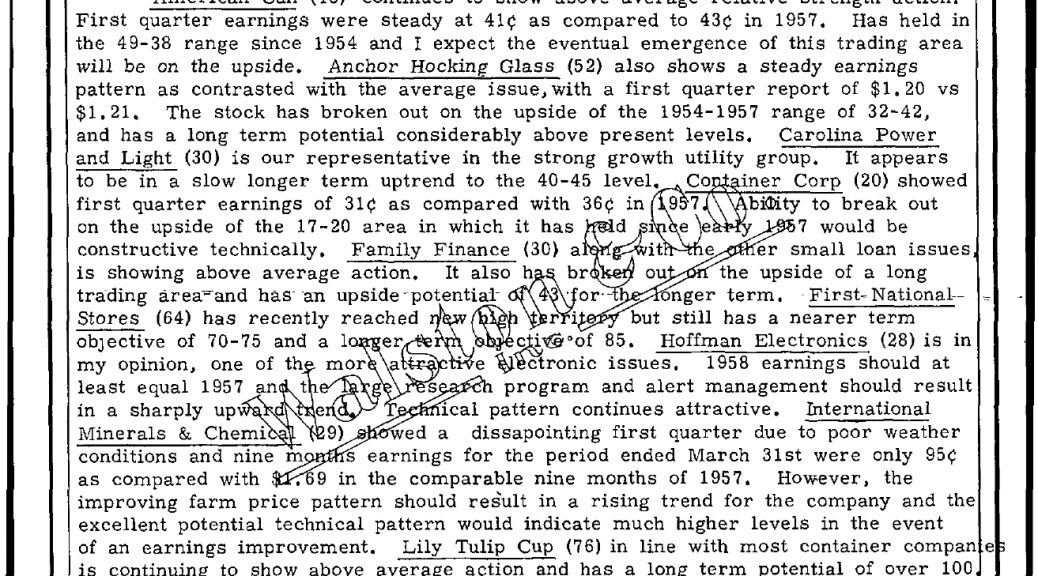 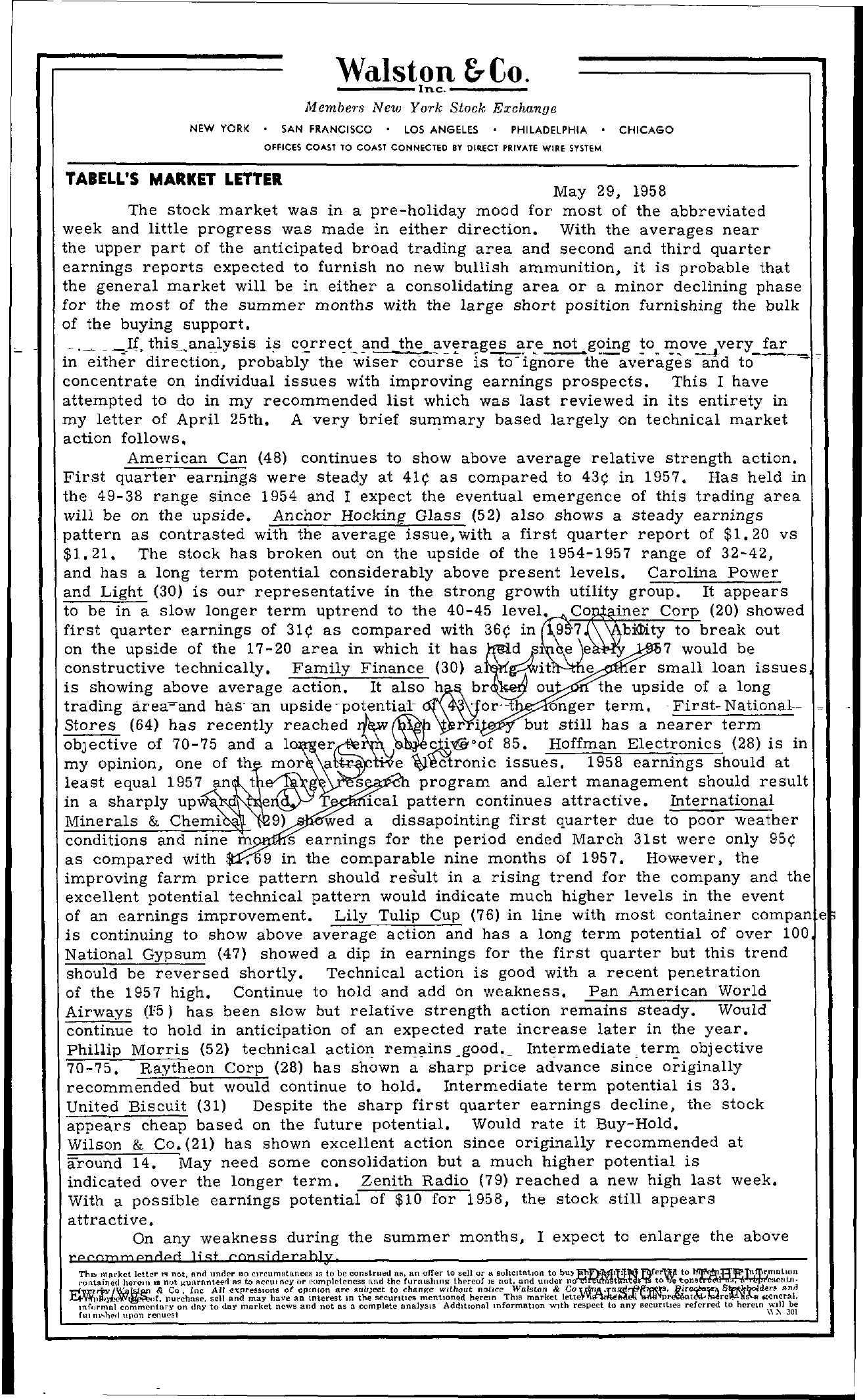 NEW YORK Walston &Co. Inc. Membe,'s New York Stock Exchange SAN FRANCISCO LOS ANGELES PHILADELPHIA OFFices COAST TO COAST CONNECTED BY DIRECT PRIVATE WIRE SYSTEM CHICAGO TABELL'S MARKET LETTER May 29, 1958 The stock market was in a pre-holiday mood for most of the abbreviated week and little progress was made in either direction. With the averages near the upper part of the anticipated broad trading area and second and third quarter earnings reports expected to furnish no new bullish ammunition, it is probable that the general market will be in either a consolidating area or a minor declining phase for the most of the summer months with the large short position furnishing the bulk of the buying support. -,IL this.analysis is the not g..!E!g .very far in either direction, probably the wiser course is to-ignore the averages and to concentrate on individual issues with improving earnings prospects. This I have attempted to do in my recommended list which was last reviewed in its entirety in my letter of April 25th. A very brief summary based largely on technical market action follows. American Can (48) continues to show above average relative strength action. First quarter earnings were steady at 41 as compared to 43 in 1957. Has held in the 49-38 range since 1954 and I expect the eventual emergence of this trading area will be on the upside. Anchor Hocking Glass (52) also shows a steady earnings pattern as contrasted with the average issue, with a first quarter report of 1.20 vs 1. 21. The stock has broken out on the upside of the 1954-1957 range of 32-42, and has a long term potential considerably above present levels. Carolina Power and Light (30) is our representative in the strong growth utility group. It appears to be in a slow longer term uptrend to the 40-45 level. iner Corp (20) showed first quarter earnings of 31 as compared with 36 in \ biJ)ity to break out on the upside of the 17-20 area in which it has I e )ehl- Vffi7 would be constructive technically. Family Finance (30) a g;wit small loan issues is showing above average action. It upside of a long trading has an upside-potential- . or– onger term. . First- National– Stores (64) has recently reached r i but still has a nearer term obJective of 70-75 and a 85. Hoffman Electronics (28) is in my opinion, one of th.!f mor a .e issues. 1958 earnings should at least equal s program and alert management should result in a sharply ical pattern continues attractive. International Minerals & e9) wed a dissapointing first quarter due to poor weather conditions and nine m s earnings for the period ended March 31st were only 95 as compared with .69 in the comparable nine months of 1957. However. the improving farm price pattern should result in a rising trend for the company and the excellent potential technical pattern would indicate much higher levels in the event of an earnings improvement. Lily Tulip Cup (76) in line with most container compan e is continuing to show above average action and has a long term potential of over 100 National Gypsum (47) showed a dip in earnings for the first quarter but this trend should be reversed shortly. Technical action is good with a recent penetration of the 1957 high. Continue to hold and add on weakness. Pan American World Airways (1'5) has been slow but relative strength action remains steady. Would continue to hold in anticipation of an expected rate increase later in the year. Phillip Morris (52) technical good, terrrl. objective 70-75. Raytheon Corp (28) has shown a sharp price advance since originally recommended but would continue to hold. Intermediate term potential is 33. United Biscuit (31) Despite the sharp first quarter earnings decline, the stock appears cheap based on the future potential. Would rate it Buy-Hold. Wilson & Co. (21) has shown excellent action since originally recommended at around 14. May need some consolidation but a much higher potential is indicated over the longer term. Zenith Radio (79) reached a new high last week. With a possible earnings potential of 10 for 1958, the stock still appears attractive. On any weakness during the summer months, I expect to enlarge the above recommended list considerabJr mnrkd letter not, lind under no Cllcumsbmces IS to be construed liS, nn offer to !'lell or 11 sohcltntlOn to bu) mlV\il'tdlliU Werlill to (unt!lincd hcn'lll IS nut gunrnnteed as to aecut ney or completeness nnd the furnishing thereof IS not, nnd under to b'e /\,\oWPfI & Co Inc All expressIOns of OPinIOn arc subject to Without notice Walston & Co TWJA .Tnlldr-8ff'CICfS. Ilna .. ,f, sell lind may hnve an Interest In the seeurltu's mentIOned herem ThIS market .,;onoral. nfurronl commentnr)' on tiny to d1)' market news and not as n complete onalysis AddltlOnol mformatlOn With respect to nny secuntlcs referred to herem Will be fUI HIIOl rCfluest \\;.. J01