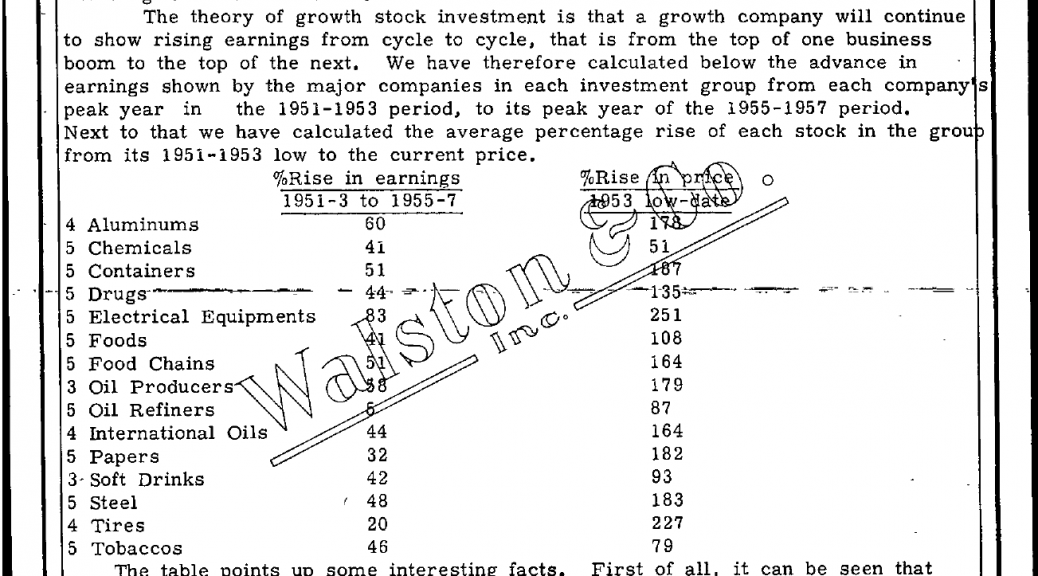 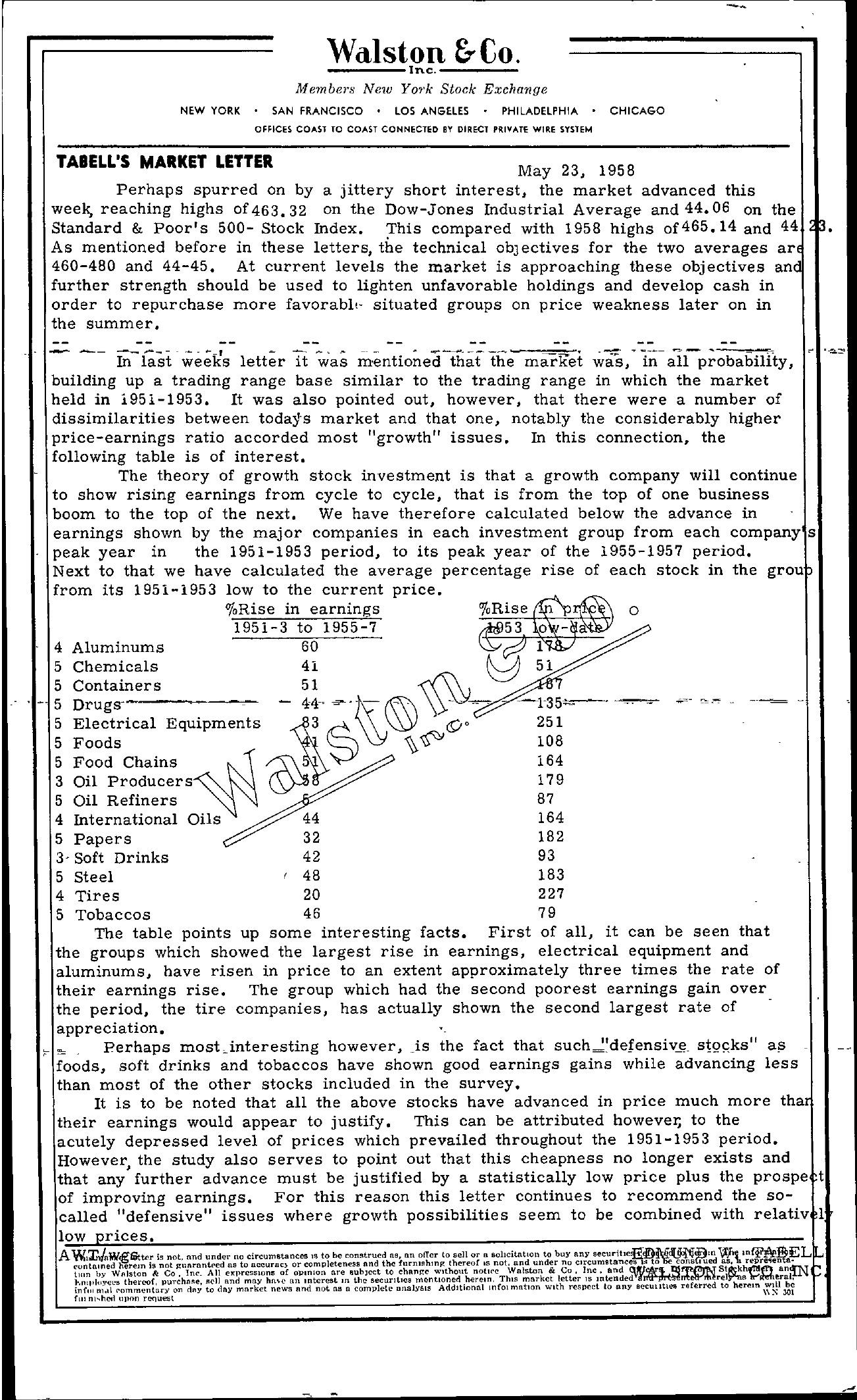 Walston &Co. —-Inc –..;;……;… Members New YO'l'k Stock Exchange NEW YORK SAN FRANCISCO LOS ANGELES PHILADELPHIA OFFICES COAST TO COAST CONNECTED BY DIRECT PRIVATE WIRE SYSTEM CHICAGO TABEll'S MARKET lETTER May 23, 1958 Perhaps spurred on by a jittery short interest, the market advanced this week, reaching highs of 463.32 on the Dow-Jones Industrial Average and 44.06 on the Standard & Poor's 500- Stock Index. This compared with 1958 highs of465.14 and 44 As mentioned before in these letters, the technical obJectives for the two averages ar 460-480 and 44-45. At current levels the market is approaching these objectives an further strength should be used to lighten unfavorable holdings and develop cash in order to repurchase more favorabl, situated groups on price weakness later on in the summer. – – – … I – – –.., …. .. -.,.- – – – 0' In last weeks letter it was mentioned that the marKet was, in all probability, building up a trading range base similar to the trading range in which the market held in 1951-1953. It was also pointed out, however, that there were a number of dissimilarities between todays market and that one, notably the considerably higher price-earnings ratio accorded most growth issues. In this connection, the following table is of interest. The theory of growth stock investment is that a growth company will continue to show rising earnings from cycle to cycle, that is from the top of one business boom to the top of the next. We have therefore calculated below the advance in earnings shown by the major companies in each investment group from each company s peak year in the 1951-1953 period, to its peak year of the 1955-1957 period. Next to that we have calculated the average percentage rise of each stock in the grou from its 1951-1953 low to the current price. Rise in earnings o 1951-3 to 1955-7 4 Aluminums 60 5 Chemicals 41 . ; 5 Electrical Equipments 5 Foods 'W c0 0 '\-. 5 Food Chains 3 Oil Producers 0,\5 164 179 5 Oil Refiners 87 4 International Oils 44 164 5 Papers 32 182 3- Soft Drinks 42 93 5 Steel I 48 183 4 Tires 20 227 5 Tobaccos 46 79 The table points up some interesting facts. First of all, it can be seen that the groups which showed the largest rise in earnings, electrical equipment and aluminums, have risen in price to an extent approximately three times the rate of their earnings rise. The group which had the second poorest earnings gain over the period, the tire companies, has actually shown the second largest rate of appreciation. c Perhaps mostcinteresting however, Js the fact that such a; foods, soft drinks and tobaccos have shown good earnings gains while advancing less than most of the other stocks included in the survey. It is to be noted that all the above stocks have advanced in price much more tha their earnings would appear to justify. This can be attributed however, to the acutely depressed level of prices which prevailed throughout the 1951-1953 period. However, the study also serves to point out that this cheapness no longer exists and that any further advance must be justified by a statistically low price plus the prospe t of improving earnings. For this reason this letter continues to recommend the so- called defensive issues where growth possibilities seem to be combined with relativ I low prices. ,ntFh1U.ELA W/XJawgStt,er is not. nnd under flO circumstances 18 to be construed ae, ('untfllned l'ierem is not Jluarnntt'cd as to nccurnc) or completeness and the tICIn by Wnlston &; Co, Inc. All expreSSIons of OPInion nre subJcct to an offer to sell or n BohcitntlOn to buy any secudheEEDlriljNarlzn thereof IS not. and under wlthout notH'(' Walston & no circumstances Co, Inc, and l tt'6e consfiUed SatlslC, -'1kl hrte1p'rdem'letaitan- m hlllplyel's thereof, purcha;e. sl'll and mny an mterest m the securItIes mentIOned herein, ThiS market letter IS 'lr'ltetLeral, inf, nJ.l\ C'()mmcntl\ry on day to day market news and not ns a completl' nnalyllls AddItional Infol mahon With respect to any Beculitiell referred to herem fUl UllOn rCfluest