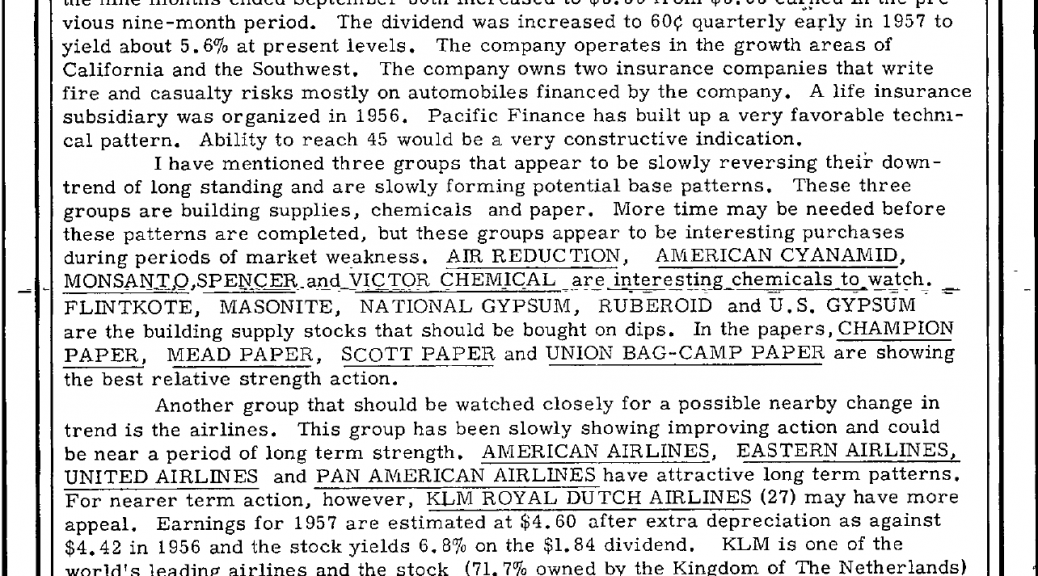 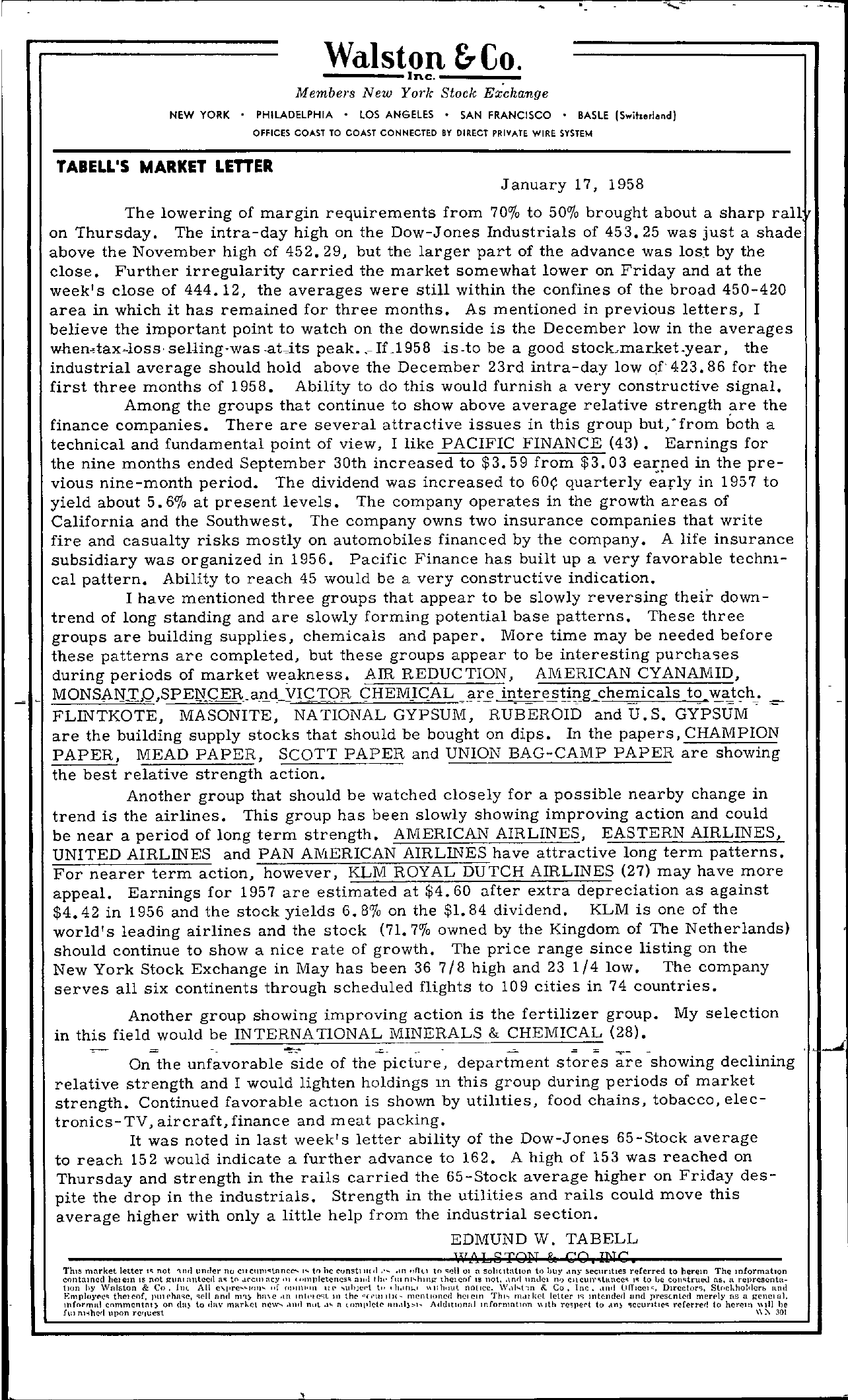 Walston &Co. Inc. – ….;;.. Members New YOTk Stock Ex'change NEW YORK PHILADELPHIA LOS ANGELES SAN FRANCISCO BASLE (Swit,l..d) OFFICES COAST TO COAST CONNECTED BY DIRECT PRIvATE WIRE SYSTEM TABELL'S MARKET LEnER January 17, 1958 The lowering of margin requirements from 700/0 to 500/0 brought about a sharp rall on Thursday. The intra-day high on the Dow-Jones Industrials of 453.25 was just a shade above the November high of 452.29, but the larger part of the advance was los.t by the close. Further irregularity carried the market somewhat lower on Friday and at the week's close of 444.12, the averages were still within the confines of the broad 450-420 area in which it has remained for three months. As mentioned in previous letters, I believe the important point to watch on the downside is the December low in the averages when.,tax-loss sellingwas -aLits peak.- IL195 8 is.to be a good stock,mar.keLyear, the industrial average should hold above the December 23rd intra-day low qf' 423. 86 for the first three months of 1958. Ability to do this would furnish a very constructive signal. Among the groups that continue to show above average relative strength are the finance companies. There are several attractive issues in this group but; from both a technical and fundamental point of view, I like PACIFIC FINANCE (43). Earnings for the nine months ended September 30th increased to 3.59 from 3.03 earned in the pre- vious nine-month period. The dividend was increased to quarterly in 1957 to yield about 5.60/0 at present levels. The company operates in the growth areas of California and the Southwest. The company owns two insurance companies that write fire and casualty risks mostly on automobiles financed by the company. A life insurance subsidiary was organized in 1956. Pacific Finance has built up a very favorable techm- cal pattern. Ability to reach 45 would be a very constructive indication. I have mentioned three groups that appear to be slowly reversing their down- trend of long standing and are slowly forming potential base patterns. These three groups are building supplies, chemicals and paper. More time may be needed before these patterns are completed, but these groups appear to be interesting purchases during periods of market weakness. AIR REDUC TION, AMERICAN CYANAMID, MONSART,O,SPENCER.aIld- VICTOR CHEMJCAL -a'r-e–in.teresting chemicals to- w-at-ch. FLINTKOTE, MASONITE, NATIONAL GYPSUM, RUBEROID and U. S. GYPSUM are the building supply stocks that should be bought on dips. In the papers, CHAMPION PAPER, MEAD PAPER, SCOTT PAPER and UNION BAG-CAMP PAPER are showing the best relative strength action. Another group that should be watched closely for a possible nearby change in trend is the airlines. This group has been slowly showing improving action and could be near a period of long term strength. AMERICAN AIRLINES, EASTERN AIRLINES, UNITED AIRLINES and PAN AIVIERICAN AIRLINES have attractive long term patterns. For nearer term action, however, KLM ROYAL DUTCH AIRLINES (27) may have more appeal. Earnings for 1957 are estimated at 4.60 after extra depreciation as against 4.42 in 1956 and the stock yields 6.80/0 on the 1.84 dividend. KLM is one of the world's leading airlines and the stock (71.7 owned by the Kingdom of The Netherlands) should continue to show a nice rate of growth. The price range since listing on the New York Stock Exchange in May has been 36 7/8 high and 23 1/4 low. The company serves all six continents through scheduled flights to 109 cities in 74 countries. Another group showing improving action is the fertilizer group. My selection -.in this field would be INTERNATIONAL MINERALS & CHEMICAL (28). On the unfavorable side of the-pictilre, department stores ;;re 'showing declining relative strength and I would lighten holdings m this group during periods of market strength. Continued favorable actlOn is shown by utihties, food chains, tobacco, electronics-TV, aircraft, finance and meat packing. It was noted in last week's letter ability of the Dow-Jones 65-Stock average to reach 152 would indicate a further advance to 162. A high of 153 was reached on Thursday and strength in the rails carried the 65-Stock average higher on Friday despite the drop in the industrials. Strength in the utilities and rails could move this average higher with only a little help from the industrial section. EDMUND W. TABELL g CQ. nqc. ThiS market letter 1; not 'l.nd un.!er no ,,, to he c'Jnstllld .111 Ih.l to 01 n sohutatlOll to buy my securitIes referred to herem The mformatJon cont(l.lncd helem IS not tn ,1rClll lcy.n (olllpletcTlcs; all.! til,' fUl n!'..,hlllg Ihelcof IS ))ot, ,\nd undCI 111) CI\CUIlltHnce to be ns, n repr(!scnta- t!on hy \Vnlston & Cn. All f (o)lI\In 11' t \\l1hllt nOllcc. &. Co. Inc, ,\lId Dlrcetof'l, Str,ehhold(!fb IltHl f'.mploYflC; thelcnf, 1'1l1l'hn;c, ;ell IInll m'l)- hl\e ,In 1ll\t'IC;t III th mentloncd hCICIll llldlket letter 1; Illtnded 1111(1 prcs(.ntcd merely (is a ,,cnCla), ItJfnrmul on to dll\' mHrh(!\ new, anrl Tl(Jt n (oml'lctc fllhlb.h AIII.huon.l InfornHitlon \\Ith rc;pcrt to .In) 'lccurltte; rderrcrl 10 hcrelll \\111 he fUI nl-lhcd upnn request \\;.. 30! ,