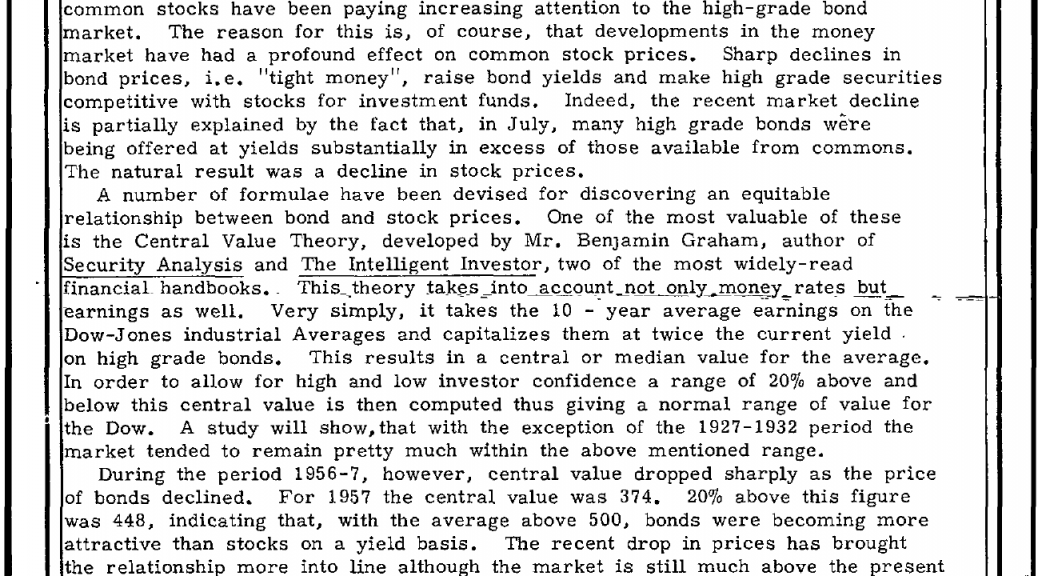 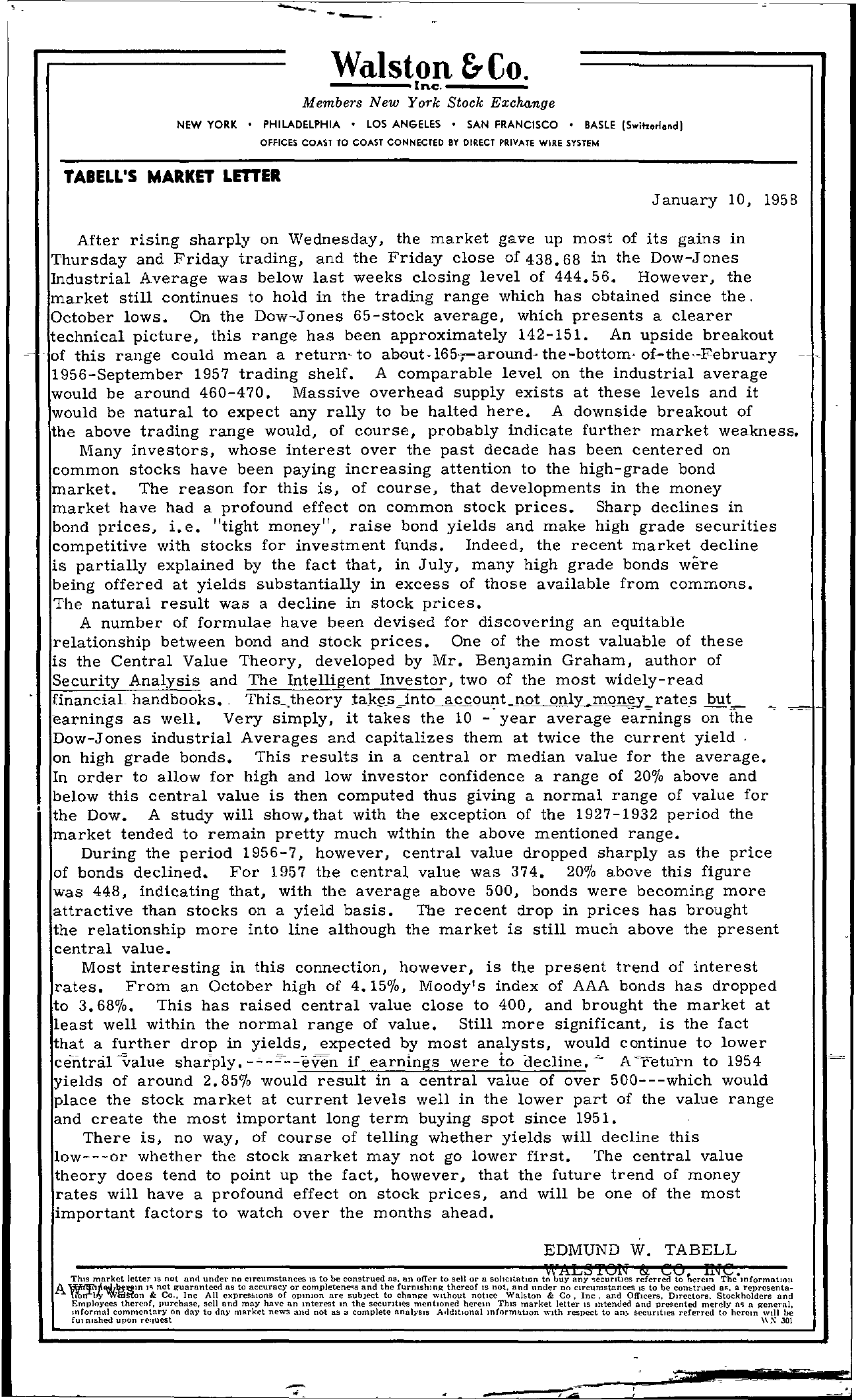 — — -W–a–lIsntocn.-&-Co. Members New York Stock Exchange NEW YORK PHILADELPHIA LOS ANGELES SAN FRANCISCO BASLE (SwH,..Id) OFFICES COAST TO COAST CONNECTED BY DIRECT PRIVATE WIRE SYSTEM TABELL'S MARKET LmER January 10, 1958 After rlsmg sharply on Wednesday, the market gave up most of its gains in Thursday and Friday trading, and the Friday close of 438.68 in the Dow-Jones Industrial Average was below last weeks closing level of 444.56. However, the market still continues to hold in the trading range which has obtained since the. October lows. On the Dow-Jones 65-stock average, which presents a clearer technical picture, this range has been approximately 142-151. An upside breakout – of this range could mean a return- to about-165-,around- 1956-September 1957 trading shelf. A comparable level on the industrial average would be around 460-470. Massive overhead supply exists at these levels and it would be natural to expect any rally to be halted here. A downside breakout of the above trading range would, of course, probably indicate further market weakness. Many investors, whose interest over the past decade has been centered on common stocks have been paying increasing attention to the high-grade bond market. The reason for this is, of course, that developments in the money market have had a profound effect on common stock prices. Sharp declines in bond prices, i. e. tight money, raise bond yields and make high grade securities competitive with stocks for investment funds. Indeed, the recent market decline is partially explained by the fact that, in July, many high grade bonds were being offered at yields substantially in excess of those available from commons. The natural result was a decline in stock prices. A number of formulae have been devised for discovering an equitable relationship between bond and stock prices. One of the most valuable of these is the Central Value Theory, developed by Mr. BenJamin Graham, author of Security Analysis and The Intelligent Investor, two of the most widely-read financial handbooks. ThisJheory only moneyrates but -earnings as well. Very simply, it takes the 10 –year average earnings on the – Dow-Jones industrial Averages and capitalizes them at twice the current yield. on high grade bonds. This results in a central or median value for the average. In order to allow for high and low investor confidence a range of 20 above and below this central value is then computed thus giving a normal range of value for the Dow. A study will show,that with the exception of the 1927-1932 period the market tended to remain pretty much within the above mentioned range. During the period 1956-7, however, central value dropped sharply as the price of bonds declined. For 1957 the central value was 374. 20 above this figure was 448, indicating that, with the average above 500, bonds were becoming more attractive than stocks on a yield basis. The recent drop in prices has brought the relationship more into line although the market is still much above the present central value. Most interesting in this connection, however, is the present trend of interest rates. From an October high of 4.15, Moody's index of AAA bonds has dropped to 3.68/0. This has raised central value close to 400, and brought the market at least well within the normal range of value. Still more significant, is the fact that a further drop in yields, expected by most analysts, would continue to lower central -value sharply. –'—–eVen if earnings were to aecline. A to 1954 yields of around 2.85 would result in a central value of over 500—which would place the stock market at current levels well in the lower part of the value range and create the most important long term buying spot since 1951. There is, no way, of course of telling whether yields will decline this low—or whether the stock market may not go lower first. The central value theory does tend to point up the fact, however, that the future trend of money rates will have a profound effect on stock prices, and will be one of the most important factors to watch over the months ahead. EDMUND W. TABELL VI itLnelH & eel me. A ThIS market letter IS not anrl under no Circumstances IS to be construed I1S. nn offer to sell or a soliCItatIOn to buy any ;eCUrltJes referred to The information 1'\ not gunrnnteed ns to or completene'S and the furnlShlnR thereof IS !lot, nnd under no circumstances IS to be COnltrued a I'epresentn- H'cltrlly & Co . Inc AU expreSloions of opmlOn are subject to chanpe Without notice & Co. Inc, and Officers, Directors. Stockholders and Eml,loyee.o; thereor, Illlrchuse, sell and may have an mterest m the SecUrltlQs mentiOned herem ThiS market letter IS mtended and prlented merely no; n penernl, mformal commentnry on day to day market news and not as a complete nonlYIHs A.ldltional mformntlon With respect to an) securities referred to herem Will be fUI nlshed upon request \\.i 301 -..